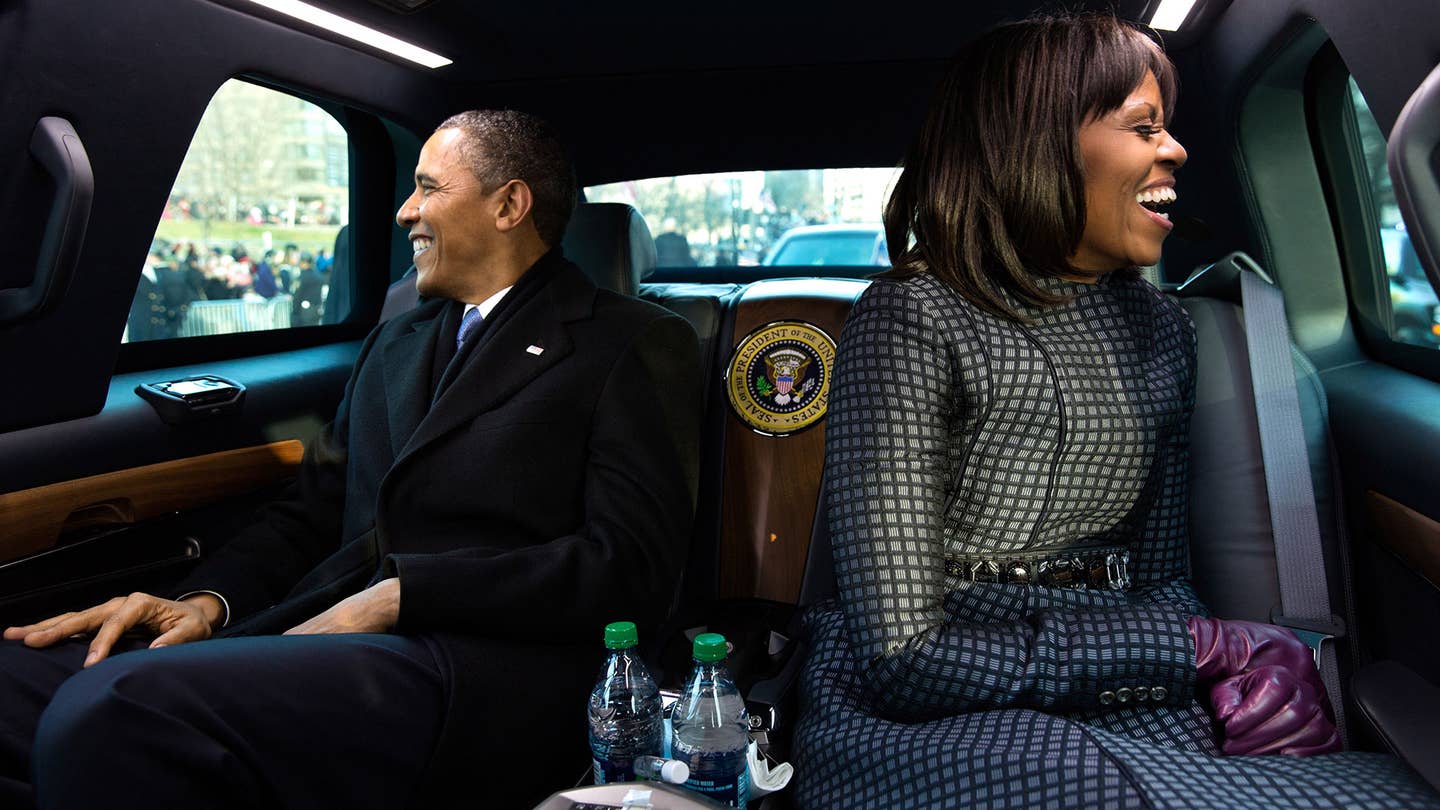 As U.S. President Barack Obama enters his last year in office, we’d like to take a final look at his official limousine. You know, the state one. Cadillac One. The Beast.

Aside from its seating arrangement—two recliners all the way in the back and three rear-facing seats—the Beast isn't much of a limo in the traditional sense. It's more of a tank, only without the howitzer. Built on an out-of-use medium duty GM truck chassis, The Beast has more in common with the armored Suburbans the US Army used in Iraq and Afghanistan than it does with your run-of-the-mill Cadillac limo. About a dozen of these $1.5 million armored limos are in existence, all owned by the U.S. government.

This shouldn't be a surprise. The leader of the Free World needs top-notch protection from all the haters out there. In addition to military grade armor and a sealed passenger compartment that protects against biochemical attacks, The Beast has an onboard oxygen supply and even a tank filled with blood of the Commander-in-Chief's type. What’s more, there’s a night-vision system, a sealed foam fuel cell that won't explode, a fire- suppression system and tear gas cannons. Rounding out the mods are run-flat tires and a communications system that allows President Obama to keep in touch with world leaders and America's nuclear arsenal, which includes the fleet of missile-wielding submarines.

Saying The Beast is armored is putting it mildly. Its doors have 8-inch-thick armor plating and pocket holsters for shotguns. The body is made from steel, aluminum, titanium and ceramic, and the deeply tinted 5-inch-thick windows are a seemingly impenetrable sandwich of glass and polycarbonate that will stop bullets fired from only 20 feet away.

For the president, staying connected at all times is key. As such, The Beast, which is fitted with a cell phone jammer, is always followed by the White House Communications Agency Roadrunner, an armored Chevrolet Suburban packed with satellite radios and antennae. But we must point out that the president also can write notes (and sign documents) the old-fashioned way, via a folding desk at his side.

If you ever see The Beast rumble by—accompanied by an armada of police cars, motorcycles, armored Suburbans, tactical team vehicles, an ambulance and motorcade volunteers' cars—Obama might not even be in it. That's the Secret Service at work. Which limo is he in? There are usually two or three identical ones in each motorcade. Is Obama even in a limo? Maybe not. He may be in one of the armored Suburbans. It's like that game where a guy puts a bean under one of three cups, moves the cups around, then asks which one the bean's under.

For all its badassness, The Beast has some drawbacks. With all that armor, it weighs several tons (no one knows exactly how much, as that information is classified). It's average fuel economy is less than 4 miles per gallon. At 18 feet long, it has a reputation for being difficult to park. Plus, if you ask us, the proportions are all wrong. It looks mean, but it hardly looks elegant.

The next president—whoever it might be—is slated to get an all-new limousine. While we don't know exactly what the Secret Service has in mind, we do have a few ideas of our own of what this New Beast should be able to do. Stay tuned for our Super Presidential Limo Concept.