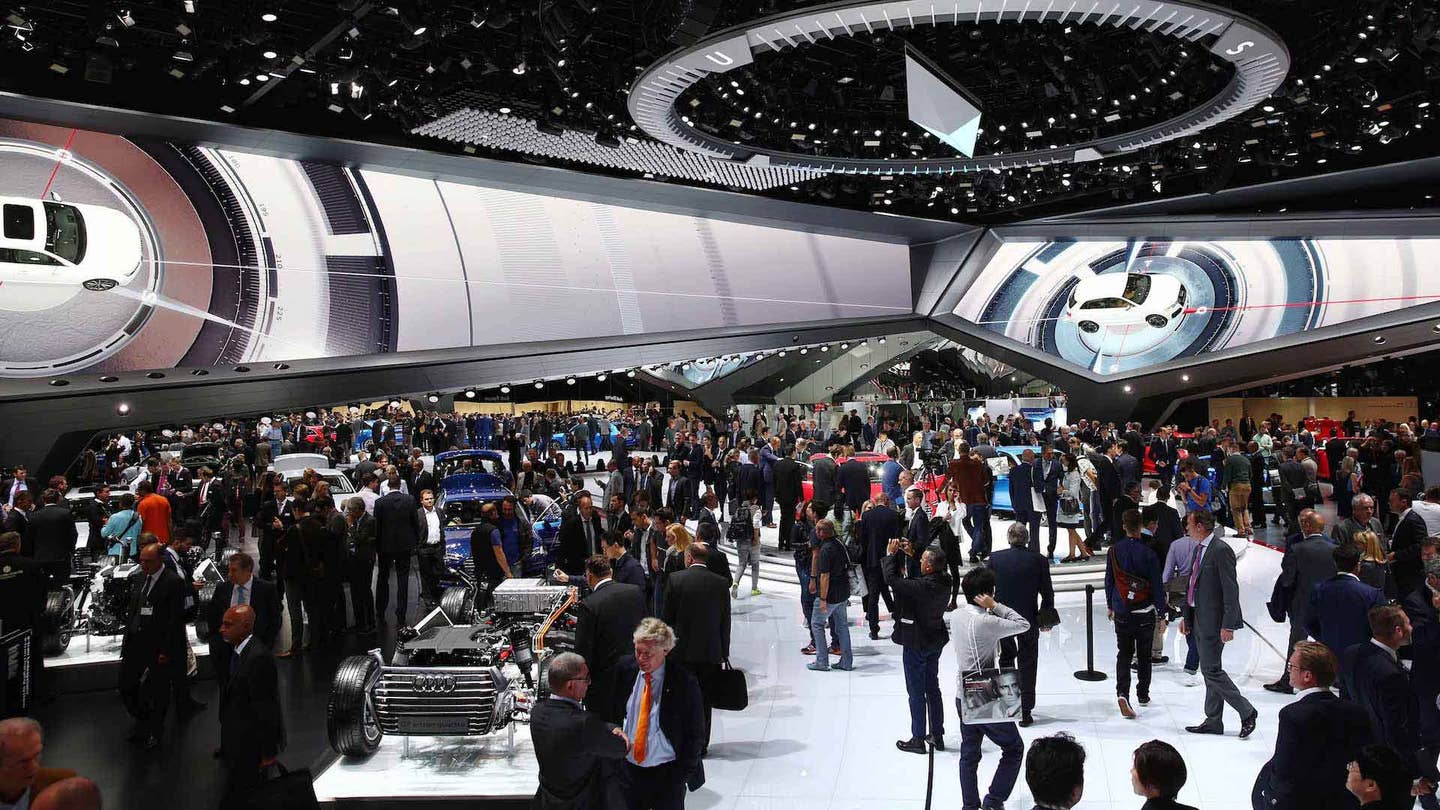 We all know what the automotive present looks like. We see it on the roads, plastered on billboards and cruising along the borders of this website. The reason we go to auto shows is to glimpse our future. The six million square feet of floor space in Frankfurt, Germany’s Messe grounds were laden with dozens of exemplars of our proximal be-wheeled destiny, models that will be released in the next year or so.

But here, as in most things, we prefer to get a little farther out there.

That means concept cars. These flights of aesthetic fancy don’t have to meet crash-test or emission standards. They can be made of cotton batting and OLED film, covered in hard-shell fructose. They just need to make a statement—and an impact—and to communicate the expectations of advanced design teams: daydreamers and windmill tippers to a one.

This year at Frankfurt we traipsed from stand to stand, rounding up the cars’ Fantasists-in-Chief and quizzing them about their creations.

Though created for the video-game franchise Gran Turismo, this concept has clear grounding in history—and reality. Its design pays homage to the brand’s curvaceous-spined 1930s Type 57C Atlantic, and sports a de rigueur Bugatti horseshoe grille. And, according to director of design Achim Anscheidt, “It is not a fantasy,” but “a clear job description from management for the car that is coming up.” That car, of course, is the replacement to the world-dominating Veyron. “Part of the Veyron’s mission was to walk the line between beauty and beast,” Anscheidt says. “The Vision GT takes us a bit more to the beast side—more performance-oriented, more aggressive.” What about the conflict in creating an ultra-exclusive car that will be “driven” by 20 million gamers? “Just because we’re designing for 450 clients shouldn’t make us elitists.”

Mercedes may just as well be granted the patent on our automotive future. This streamlined, vector-tailed, self-driving argent bullet is the smoothest of Stuttgart’s many recent motor-show hits. “It embodies the next level in our sensual purity design philosophy,” says head of design Gorden Wagener. “Sexy, attractive and high tech.” He notes the active aerodynamic shutters and spoilers that cover the wheels and grille, wheels that move from deep dish to flush. Then he walks around to the slanting rear and activates a tail extender that protrudes a wind-slicing foot- and-a-half at speed. The tail lamps sparkle in the recessed ellipse. “It’s like the afterburner of a jet,” Wagener says, staring into their shuddering glow. “I love this.”

The Vivaro is a commercial van, ideal for plumbers. But what if it were outfitted for surfers? “The name is a play on words,” says director of commercial vehicles Steffen Raschig, indicating not just the surfboard rails up top and the ambiently lit wetsuit storage compartments in the rear, but the 4G wi-fi integrated into the cabin. (Surf, get it?) Raschig’s team didn’t want a concept that was too far removed from production feasibility, so this van could readily be upfitted at their Luton, UK, conversion center. But where are the surfing hotspots in Germany? “On the north coast,” Raschig says. “Since this is our only coast.”

With a stated goal of harnessing its expertise in two- and four-wheel design, Honda held a global internal competition that brought in 80 submissions. Of these, it was motorcycle designer Martin Petersson’s 2&4 that rolled away a winner. “In car design, the packaging says where to place the components,” Petersen says, crouching alongside his shin-high, barely there concept. “In motorcycles, our question is, How can we make visible technical components look bloody cool?” The resulting open-wheel, carbon-fiber-sandwiched, MotoGP-engined two-seater succeeds, layering heart-stopping lightness and borderline-pornographic exposure. “You could drive it in flip-flops and a Speedo, if you want,” Petersson says. “But you’d probably want a helmet.”

“Electric cars don’t generate sound,” notes Matthias Hossann, Peugeot’s advanced design director. “But sound is part of the driving experience.” The Fractal is an electric car in which sound is added back in—by experimental sound designer and clubland icon Amon Tobin—to enliven the experience, providing, for example, a sense of location. (If you’re to turn left, the audio navigation instructions come from the left, and seem to get closer as you approach the maneuver.) Hossann points out other sonic-inflected choices: the 3D-printed acoustic foam-like substance that lines the cabin, the copper interior trim that references speaker cable, the tail lamps that pulse like a graphic equalizer’s display. He runs his hand over the ribbed matte black paint on the exterior. “It’s like vinyl,” he says. “Like an album.”

Porsches had front-mounted storage bins—“frunks”—before Elon Musk was even born, so we’re delighted to see the brand finally showing a sexy, battery-powered concept to challenge the Model S. “It’s not just an electric car from Porsche,” says Porsche designer Stefan Weckbach. “It’s a real Porsche.” This means a front clip that references the 918 Spyder hypercar, a rear tumblehome that references the 911, a sub-3.5-second zero-to-60 time and an impossibly low stance. “130 centimeters in height,” Weckbach says, adding, incidentally that the Tesla is, “almost 145.” It also means five round dials facing the driver, but on a freestanding, eye-tracking OLED display. And a unique 800-volt “Turbo Charging” plug. “Not just driving fast,” says Weckbach. “Charging fast.”

When Nissan brought out the Juke, it was almost alone in the small crossover category. Now, every manufacturer has an entry. To stay ahead, Nissan looked to the past. “The inspirations are Nissan rally racing history, and the racing bicycle,” says Mamoru Aoki, Nissan’s executive design director. To this end, the Gripz looks like a jacked-up 240Z sports coupe—long nose, triangular cabin—and outfitted with an interior that features an exposed bike-like frame, and door handles that resemble bicycle saddles. Aoki-san points out the layered carbon fiber Kamm tail, see-through carbon-fiber A-pillar and deep-V carbon fiber hood. “It’s a carbon fiber frame,” he says. “With armor.”

“Our top priority was long range,” says Andreas Mindt, Audi’s exterior design chief. “So, though we started with a 400-kilometer [250-mile] range, we improved that to 500 kilometers from design.” He credits an internal aero competition, using a quarter-scale model and a wind tunnel. The form is inspired by the box-flared Ur-Quattro rally coupe of the Eighties, though its muscularity has been retained yet planed. But like all recent Audis, the real strength is in the interior. “The car must look different inside from a standard car,” Mindt says. All leather, Alcantara, floating aluminum and OLEDs, it’s airy yet substantial. We note an absence of wood. Wood, it would seem, is the past. “It doesn’t need wood,” Mindt says definitively.