And an interior full of triangles that flow like a school of fish. 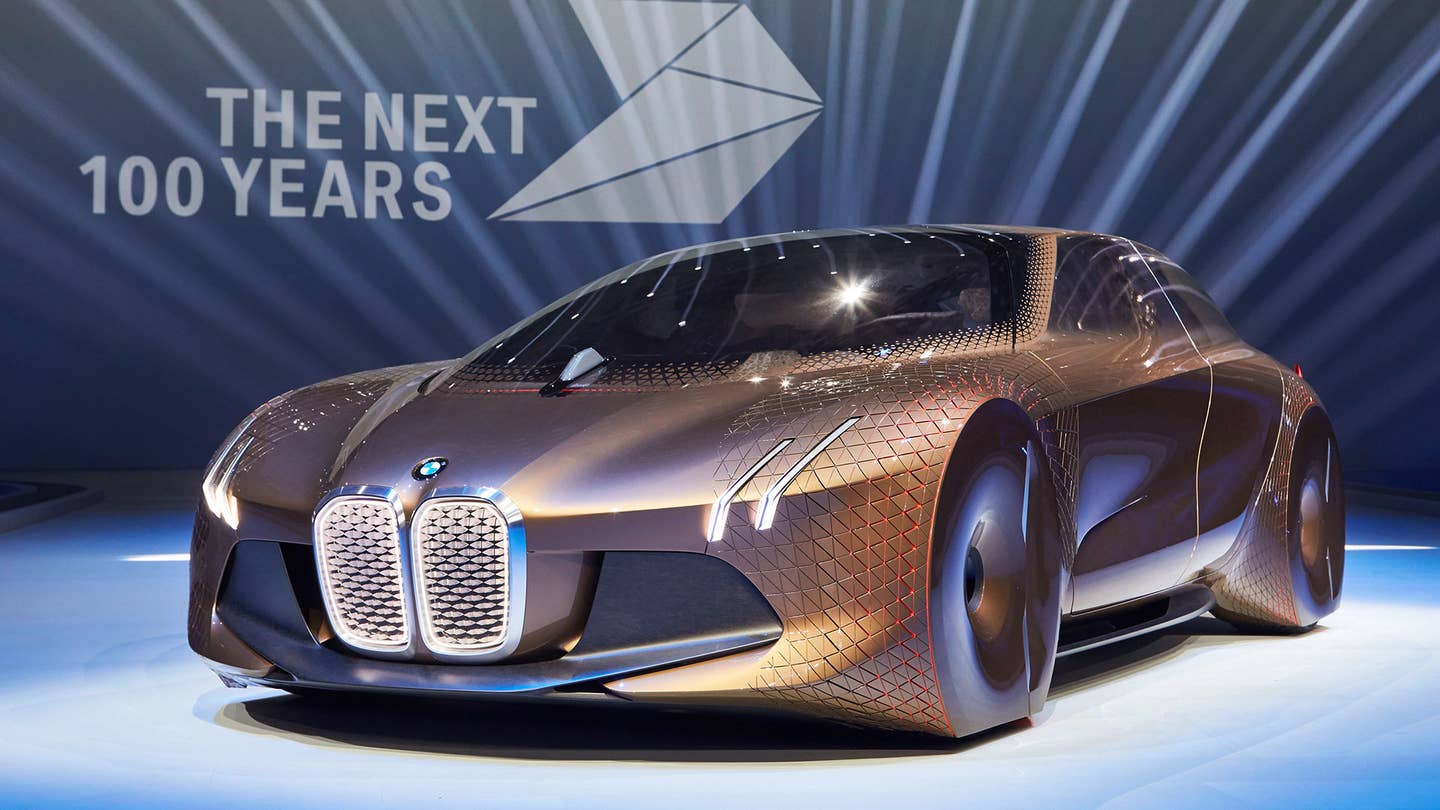 Every car company has to grapple with the self-driving future in its own way. For BMW, that's a tougher task than many. After all, this is a car company that built itself around the image—nay, the goal—of being purveyors of the Ultimate Driving Machine. So what happens when people stop driving?

The Vision Next 100 concept car is BMW’s way of trying to figure that out. Commissioned for the automakers 100th anniversary, the concept looks decades down the line to take a stab at what BMW drivers will want. And what a weird, super-conceptual look down the line it is.

For starters, BMW expects that car owners will still be want to be drivers—at least, some of the time. So instead of taking over entirely, BMW aims to use tech that'll help customers become better drivers when they feel like taking the reins, while letting them relax when they’d rather not worry about it. The Vision Next 100 offers a choice of two operating modes: Boost Mode, for when the person in the front left seat wants control, and Ease Mode, for when he or she would rather Netflix and chill with the person next to them. While the insides more or less resemble a regular car’s layout in Boost Mode, switching into Ease causes the steering wheel to retract and the seats to shift into a lounge configuration that makes it easier for the occupants to interact (Giggity—Ed.) The gem-like “sculptural element” in the dash, which serves as the centerpiece for the car’s JARVIS-esque digital butler known as “Companion,” rises up, becoming an interface for the OLED head-up display that spans the entire width of the windshield.

But the windshield-slash-TV screen is nothing compared to the Vision Next 100’s biggest interior surprise, Alive Geometry. Nearly 800 tiny triangles are distributed throughout the driver’s line of sight, moving in three dimensions to direct the driver’s attention to whatever’s important. Alive Geometry can alert the driver to potential hazards, provide navigational instructions, even show the driver the best line on a track. Flowing like a school of fish, the triangles can offer more intuitive instructions than current systems.

That Alive Geometry system extends to active wheel covers, which stretch like skin when the wheel turns, helping contribute to the ridiculously low 0.18 drag coefficient. The doors—gullwings, of course, because it’s the future, guys—open automatically as the driver approaches. And the lighting changes color depending on what mode the car is in, so other road-goers know whether or not the Vision Next 100 barreling towards them is being controlled by a human or artificial intelligence that’s decided it’s sick of the Three Laws.

Of course, there’s a big caveat to all the Vision Next 100’s features: As Tom and Ray used to say on Car Talk, they’re all bo-o-o-o-o--gus. Even BMW admits they don’t know, say, how Alive Geometry could be made production feasible; the artificial intelligence required to learn your habits and make suggestions is still a good ways from consumer use. And there’s nary a mention of what might power such a fantastic automobile. Lithium-ion batteries? Arc reactor? Warp core?

But practicality isn’t the point of the Vision Next 100. It’s an exercise in imagination, a conceptual leap into the distant future. Good on BMW, then, for not only being willing to take that leap—but for letting us see how weird and wild the future of cars might be.