This $20,000 Watch Winder Is Built From a BMW Engine Block

If you love timepieces and cars, this watch winder is a gentleman's accessory you need in your life. 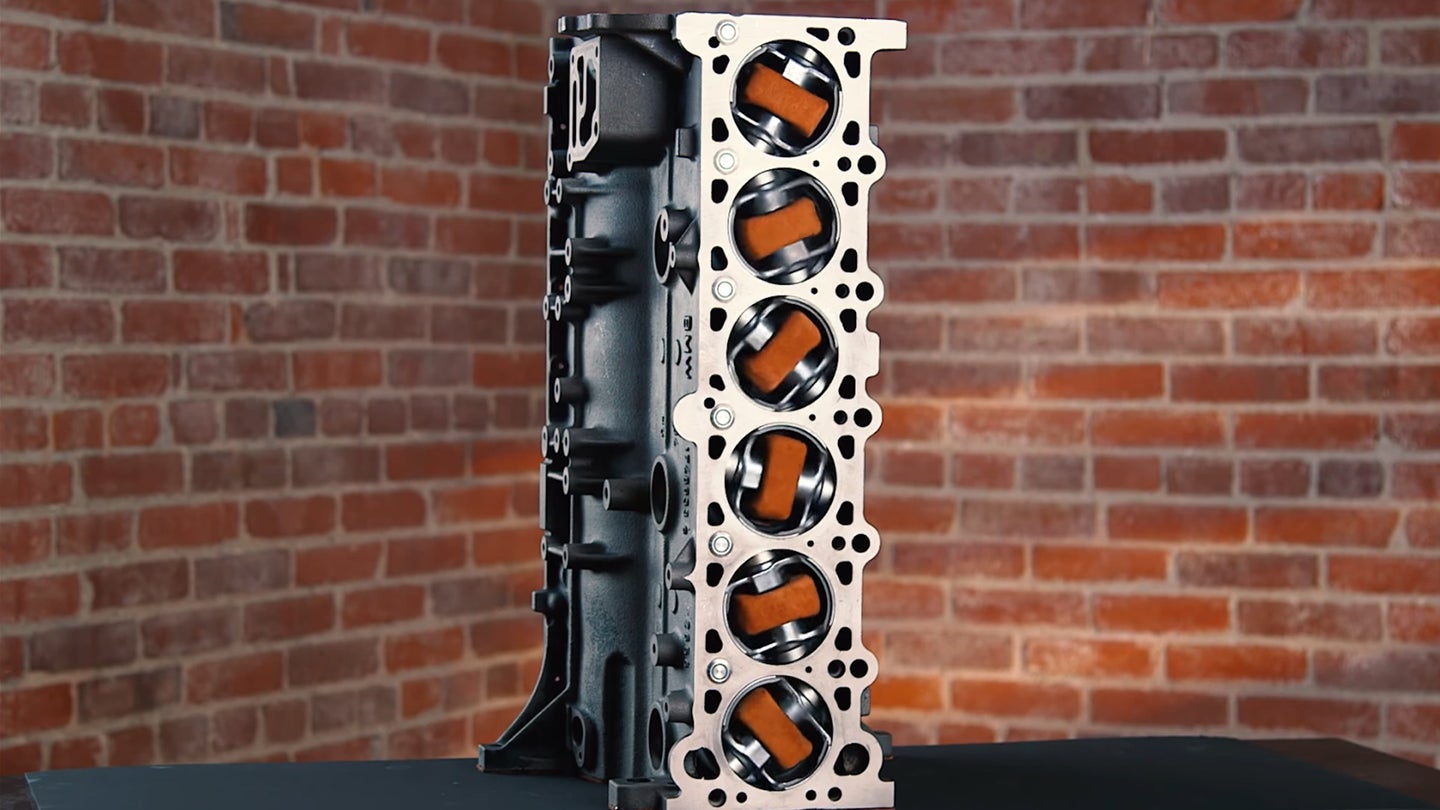 If you love cars and watches, you'll love this winder. Making use of an old BMW Inline-6 motor, Vulcan Innova has built a great tabletop piece to hold and wind up to six watches at a time, including your new $41,000 dollar Singer timepiece, all while looking super stylish to a gearhead.

Vulcan Innova takes a bare 2.8-liter BMW M52 block and goes to town. Original pistons are used but are flipped upside down to make use of the boss area —that's the part where the pin secures the connecting rod to the piston—to nest a luxury fabric which will support the watch. Hidden inside each cylinder wall is a high-grade stepper motor which can eject the piston from its nesting place to seat or remove a watch. The buttons to control the electronics of the winders are set in place of the head bolts along the finished surface and can activate up to three programmed rotation cycles which can be customized using a home computer.

Once inserted, the watches can begin their winding cycles, producing a methodical circular dance. For those bothered by the uneven movements of the winding, don't worry, the unit has two preset modes which can move all of the watches at the same time. For added security, the winder locks the pistons in place when finished with the winding process, requiring they be removed by unlocking the unit with a key. Only once the piston rises from the cylinder can the watch actually be removed.

The M52B28 was found in a plethora of BMWs during the latter half of the '90s, including the E36 3-series, E39 5-series, E38 7-series, and E37 Z3. It was finally retired in 1998 in favor of a "technical update" (M52TUB28) which featured variable valve timing for both the intake and exhaust camshafts. Its very similarly constructed older brother, the S50B30, was even called a "mechanically perfect engine" by Gerhard Richter who was BMW's head of chassis development for the E36.

I don't consider myself to be much of a watch aficionado, unless you count the smartwatch on my wrist, but I do love building E36 BMWs, which is what really draws me to this being an interesting re-purpose of old and tired equipment. But for those of you who fit both categories and love to show off their collections of rare and unusual driver's watches—and can stomach the $21,999 dollar price tag—this may very well be the new centerpiece for your home.

BMW's Spartanburg Plant Is 25 Years Old and Thriving By Justin Hughes
Watch This Speeding BMW Driver Have Himself a Nice Little Highway Crash By Kyle Cheromcha Posted in Watch This
You Can Buy Steve Jobs' 2000 BMW Z8 and the Motorola Car Phone He 'Hated' By Kyle Cheromcha Posted in News
Watch These Guys Shoot and Blow up a BMW By Justin Hughes
The Ultimate 1982 BMW B7 Alpina Will Cost You $300,000 By Caleb Jacobs
MORE TO READ