Results: 24H Series at Circuit of the Americas

The Creventic 24H Series takes on COTA for the first time with gentleman drivers and professionals aplenty. 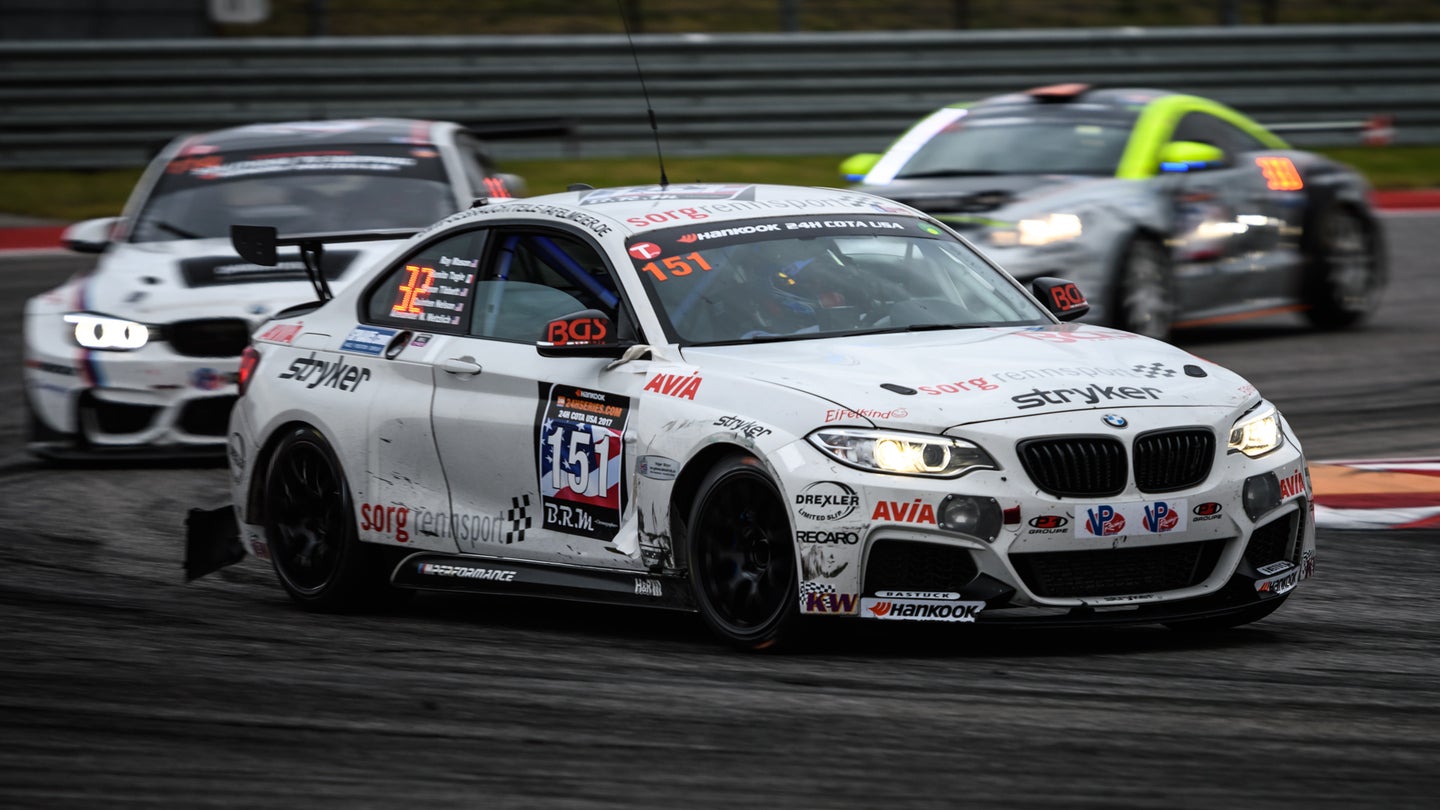 The Creventic Series took on its inaugural competition at COTA this past weekend, filling the Austin, Texas track with long-stint endurance racing that spanned 24 hours of competition. Divided into three days, the unique running layout provided both day and night action for the loaded field of professional Le Mans pilots and team-owning gentleman drivers. Hosting seven classes and 41 teams, the packed race weekend flew the series' flag over the American circuit for the first time and brought in competitors from North America, Europe, and more.

Herberth Motorsport notched the overall win in Creventic's top A6-Pro class with its Porsche 911 GT3 R. The German crew piloted the No. 911 car for 608 laps, beating its nearest rival, the Black Falcon Mercedes-AMG GT3, by 2 laps. A mixed field of Porsches and Mercedes racers filled the remainder of the professional class and rounded out an all-German podium in the category.

As for A6-Am, the No. 34 Audi R8 LMS of Car Collection Motorsports claimed the victory over V8 Racing's Chevrolet Corvette C6.ZR1. A healthy 14 lap lead helped the team to victory after a V8 Racing suspension failure, ending the race much differently than its No. 33 sister car that ignited mid-race. The No. 10 Leipert Motorsport Lamborghini Huracan Super Trofeo then came in third ahead of De La Torre Racing's Aston Martin Vantage GT3.

The No. 85 car driven by PROsport Performance (Putman/Espenlaub/Foster) was the Porsche 991-spec series winner at COTA. This level field consistently provides entertainment on track by leaving the drivers to do the work without any mechanical advantages over one another. All five entrants completed the 24-hour event though 37 laps separated first (581) and last place (544).

Creventic's SP2 category is perhaps the most interesting of the bunch as it features wildly powerful machines in unlikely packages such as this MARC Mazda V8. Although the bodywork is shaped after the Mazda3 road car, underneath lies a tube-frame chassis and rear wheel drivetrain that receives power from, what else, a 500 horsepower Coyote V8. MARC has done this before with its Focus V8 sedan, which was also at the 24H of COTA, and all three cars on the podium were built by the Aussie company.

Other classes like the A2 compact category diversified the field with Honda Civic Si racers and others going up against the seemingly-gigantic Mercedes-AMG cars in A6-Pro. A healthy mix of touring cars and small sedan entrants made for a spectacle at the Southern track, especially when running alongside the supercars of higher classes.

The Creventic Series drew in a list of big names including Aston Martin CEO Andy Palmer and Paul Hollywood. The British businessmen entered the race together on the Aston Martin Lagonda team, proving that the league is fair game for pros and amateurs alike. While current competition is limited to loosely production-based performance cars, the series will expand to include prototypes in January 2018 at Dubai. This move is planned to lure in more hardcore racers and spread out the field even further to allow a proving ground for developing and well-established teams.

As it stands, this new endurance series culminates bits and pieces from IMSA, Pirelli World Challenge, and the World Endurance Championship in a privately-run package. It revives the spirit of gentleman drivers from yesterday and introduces it to the modernized multi-class racing system which results in a unique, one-off experience. To follow more Creventic action, look for coverage of its next race in Dubai here at The Drive.