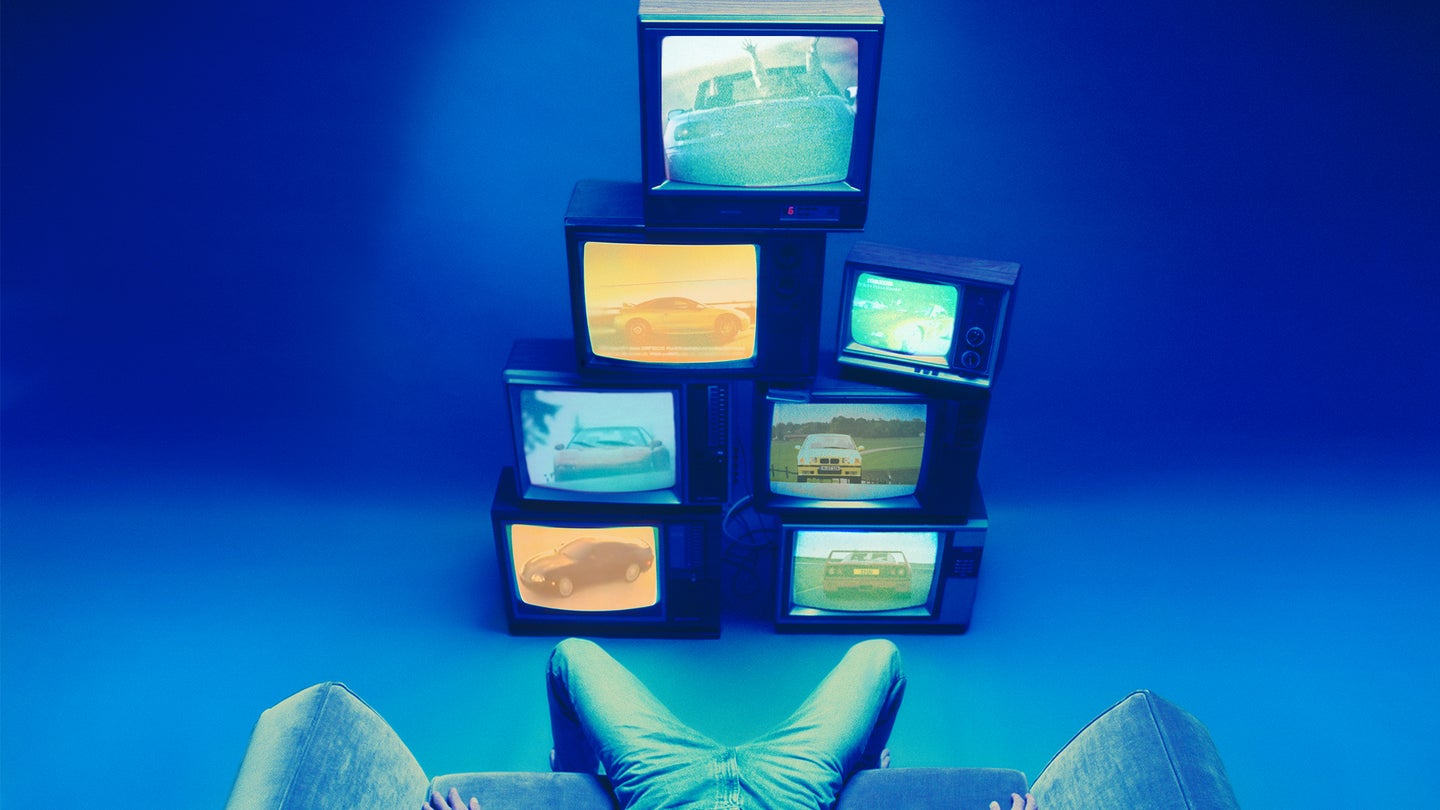 The 1990s were some of the absolute greatest years, am I right? It is the decade that many millennials—now poised to enter their thirties—will look back upon in that gauzy, nostalgic way. Not only was I born in the 1990s, but so was Nintendo's 007: Goldeneye for the N64, and Hasbro's Bop It, and AOL's recently deceased instant messaging platform, which I might or might not have used to send passive-aggressive Green Day lyrics.

Something I didn't pay attention to until a little later: the top entries on my growing list of coveted cars.

Here are my nine iconic ‘90s cars—the rides that made the decade a fantastic time to be a car guy.

There’s an acronym that most of you will have heard before: “Miata Is Always The Answer”. Much like what it spells out, this particular roadster has proven to be the platform for a very particular subset of cars. Mazda had to be doing something right when it produced the first generation (NA) Miata. In its eight-year stint, the NA chassis sold over 400,000 units - ultimately it would claim the world record for bestselling car of its class. That’s despite the car being a tiny two-seater with no fancy turbo, no movie gimmicks, and no roof.

The Miata was introduced with a less-than-desirable 1.6-liter four cylinder and was sold that way until 1994. Begging for more power, Mazda stuffed an additional 241 cc of displacement into the power plant. It produced 133 horsepower, which, although not a lot, complimented the lightweight 2,180 lb car. It was slow in a straight line, taking over eight seconds to hit 60 mph. But in the corners is where the roadster really bore its teeth. The car had all-but-neutral handling, boasting its 50/50 weight distribution as a bragging right. Oversteer was available on command with its limited-slip differential, and fun was only limited by how much you wanted to push the little car.

Best of all, the Miata was cheap. Like, $16,000-and-change cheap. This enabled Mazda to sell literal boatloads of these little cars as fast as they could. Today, these cars still litter the for-sale ads, and people still buy them like hotcakes.

Mitsubishi’s partnership with Chrysler birthed Diamond Start Motors (DSM) in 1989. From the ash rose three iconic, nearly identical cars: the Mitsubishi Eclipse, the Eagle Talon, and the Plymouth Laser. But more importantly, what made these cars so great, was borrowed from the rally heart of the Evolution – the powerplant known by most as the 4G63.

The crème de la crème came in the flavor of the GSX. The 4-cylinder turbo coupe pumped out a respectable 210 horsepower to all four wheels. Upgrading to the “big 16G” turbo with fuel mods and a tune could easily net owners around 350 horsepower.

The ‘90s were the absolute pinnacle of both Honda and Acura engineering. You had the Honda Civic, the Acura Integra, and—most importantly—the “New Sports eXperimental.” The NSX is the car Acura produced just because they could.

By the end of its 1990 run, Honda had packed rev-happy 290 horsepower 3.2 liter V6 engine into the back of the sports coupe, making the rear-engine, rear-wheel-drive monster a pleasure to drive. Thanks to being the world’s first all-aluminum production car, the NSX shaved off almost 500 lbs from a steel-based counterpart, tipping the scales at only 3,010 lbs when it was introduced.

The free-flowing interior, bitter exhaust note, and price tag similar to the 1990 Chevy Corvette ZR1, it was an attainable “every man’s” supercar.

Mazda's Rotary eXperiment (RX) division also reached peak greatness during the same prodigious period. With the introduction of the FD chassis, the automaker would close the books on its second greatest contribution to mankind.

On top of the FD RX-7 having timeless figure, it also packed a powerful punch. Thanks to the Japanese automakers gentleman’s agreement, the RX-7’s magic rotating triangles pumped out as much as 276 horsepower using sequentially-arranged twin-turbochargers to force copious amounts of air into its 1.3 liter dual-rotor Wankel motor.

BMW’s contribution to the ‘90s was none other than the 3-series. But one particular performance-oriented model, took the cake above all others: the M3.

This is a pretty subjective statement to many state-side readers, because America wasn’t as fortunate as Europe when it came to the M3. Instead, the U.S. was given the scraps of the European model, which – and let’s face it – was still a pretty great car. The well-balanced suspension allowed the car to gobble up corners, the ZF transmission changed gears like a hot knife slicing through butter, and the growl of the unmistakable BMW inline-6 still resonates through my dreams.

The European-spec S50B30 was the epitome of a racing engine in a car that a business man can take to work. Gerhard Richter, head of chassis development for the E36, even called it a “mechanically perfect engine”. A few years later, it was replaced by the S50B32, placing a respectable 321 horsepower to the rear wheels with a 6-speed manual gearbox.

The fourth generation Toyota Supra is the car every kid who grew up watching The Fast and the Furious wanted. Sitting behind of the same car orange targa-top titan that Paul Walker piloted could only be a dream then, but it's something you can now make a reality. The infamous 2JZ-GTE sat under the hood of the Supra's sweeping figure, ready to unleash everything the 3.0-liter inline-6 could throw at the pavement. From the factory, that was 320 horsepower in U.S., thanks to the use of twin turbochargers, which, much like the FD RX-7, were sequentially arranged for minimal boost lag.

Because of its strong cast-iron block and forgiving internals, an owner can simply throw a large single turbo into the mix (along with supporting mods) and make upwards of 600 horsepower. This gave tuners the ultimate platform to work with. It's fast, it's forgiving, and it weighed under 3,300 lbs. It was another perfectly executed front-engine rear-wheel-drive platform with gobs of power available at the touch of a pedal. To this day, the turbo MK4 Supra is desirable. A low-mileage manual, twin-turbo Supra can easily fetch north of $60,000, while it's naturally aspirated and automatic counterparts still sell for as much as a new Prius.

Another Bimmer made not just waves, but a typhoon. To this day, the third-generation e39 M5 is considered to be one of the most well-rounded BMWs ever produced. The 4,000 lb sedan toed the line between being a sports sedan, and a family commuter. It was big enough to comfortably sit five people, but sporty enough to accelerate from 0-60 mph in under 4.8 seconds, quicker than the e36 M3. This is all thanks to BMW's decision to add almost an extra liter of displacement and 2,000 RPMs of revs to the top-of-the-line 540i. The result? An engine that produces 394 horsepower from its 4.9-liter V8, all while mustering a sound that no American engine could dream of making.

The regular 5-series felt like a luxury car - specifically, they had the handling of a well-tuned yacht. BMW decided that no race-inspired model should be subject to the same float, so it gave the M5 a shorter steering ratio and coupled it with a stiffer, lower suspension that gave the M5 its signature handling, despite weighing in a two tons.

The M5 was a hard car to add to this list. I had originally considered the 540i, as it was produced for a longer time period within the '90s and is still a fantastic car. Alas, it's called the "poor man's M5" for a reason, and that's because, albeit a fantastic choice to own, is a completely different car. The style, sound, and simplicity of this sports saloon can still turn heads, even 19 years after its release.

In a time when Audi didn’t have a sports division, the world was a boring place. Fortunately, sibling automaker Porsche was only a phone call away. Not long after the two began collaborating and listening, a bastardized creation made its way to the spotlight. Meet the RS2 Avant.

Audi took its iconic 80 Avant, slapped it on the modernized B4 platform, and then fitted an inline-five cylinder motor under the hood. A single giant turbo breathed the gift of life into the 2.2 liter sleeping beauty, unleashing 311 horsepower to all four wheels through Audi’s iconic Quattro all-wheel-drive system.

What makes this car interesting isn’t the fact that it could accelerate from 0-60 in just 4.8 seconds, but it could do half of the sprint faster than even a McLaren F1, all while weighing over 3,500 lbs. Audi’s lovechild became the basis of all future RS-series cars in existence.

McLaren loves to show the world that it can make the greatest and fastest cars around. In the '90s, this was done by stuffing a 6.1-liter BMW V12 engine into 106 futuristic looking three-seater road cars that simply weren't meant for this world. A lot of people might not know it by name, but they will know it when they realize it's the car that stuffed the driver right into the middle of the driving experience. This was the McLaren F1.

McLaren once held the world record for fastest production car for seven years after the F1 reached speeds of a staggering 240 mph. The 2,500 lb naturally aspirated car used all of its might to accelerate from 0-60 in an impressive 3.4 seconds. The 627 horsepower V12 pushed the F1 through the quarter mile in only 11.6 seconds, a number that was all but unheard of for a production car in the '90s.

Of course, not just anybody could own an F1. If you were Elon Musk (who crashed his without insurance) or Jay Leno, sure, the $800,000 hypercar was in reach for you. But after last year's Sotheby's auction at Pebble Beach, unless you have $13.75 million, you can't buy one.

I dare you to ask any single exotic car fanatic to bring up the most iconic Ferrari in history. Chances are, they go straight for the F40. With a ferocious stance and boxy, aggressive body lines, Enzo Ferrari had a chance to witness the apogee of his life’s achievements, creating a permanent obelisk in the automotive industry.

The high-pitched scream of the F40’s 2.9 liter V8 compliments the raw exhaust notes resonate from its center-mounted tailpipes, almost like an analogy of angels casting their voices against an overwhelming choir from the fiery pits of hell. On the business side of the engine, 471 horsepower is sent to the rear wheels through a 5-speed manual transmission, propelling the 1.5 ton monster from 0-60 in a swift 4.2 seconds.

The Ferrari’s interior is nothing short of simple. A gated shifter remains the centerpiece of the vehicle’s interior, sitting neatly atop the center hump. Switches, buttons, and analog gauges fill the remainder of the free space across the driver and passenger to remind the occupants of the car lacking even the most basic of driver aids.

Mid-Nineties Dream Car 993 Carrera RS Clubsport For Sale In Canada By Bradley Brownell Posted in Porsche
Ferrari Or Porsche – Which Is The King Of The Nineties? By Bradley Brownell Posted in Porsche
This Ferrari F355 Spider on Bring a Trailer Is a Time Machine to the '90s By Chris Constantine
This Ridox Toyota Supra Is '90s JDM At Its Best By Danny Choy
This 1993 Porsche Turbo S 'Leichtbau' Has a Wonderfully 90s Interior By Christian Gilbertsen Posted in News
MORE TO READ