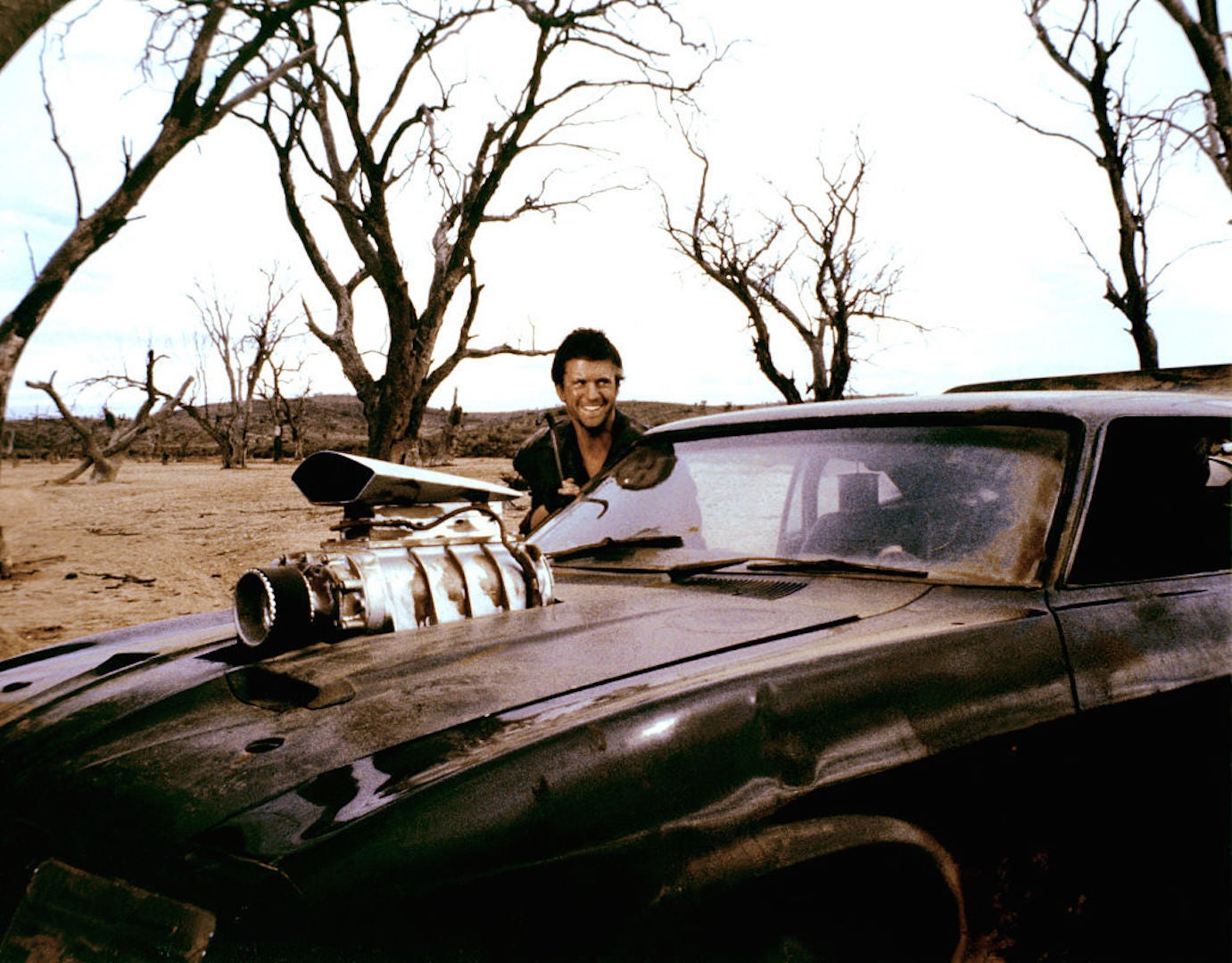 Every time Hollywood releases a new slate of movies, the list of best car movies of all time changes. In the past few years, we've seen new Fast and Furious chapters—a franchise that collectively forms a sort of Normandy Beach invasion of all car movies—as well as some great documentaries, like Senna and Apex: The Story of the Hypercar.

The fact of the matter is, to a car guy, choosing a list of the ten best car movies of all time is sort of like a food fanatic trying to rank their favorite all-time meals. The sheer quantity overwhelms the senses: Vanishing Point,

Tucker, The Great Race, Grand Prix, The Blues Brothers, Smokey and the Bandit, you get the point. Not every great car film can fit on a top 10 ranking. To choose our list, we combined our staff's eagle eyes for great car moments in movies along with a little subjective judgement. We pointedly excluded the James Bond films, in part as a penalty for Bond having partnered up with so clumsily with Ford in Quantum of Solace (Ford Ka?) and elsewhere. We also tried to include a couple unexpected choices, and to balance cultural impact and quality of filmmaking. (Oftentimes, the two are in complete opposition).

Think this list is incomplete? So do we. Let's hear your selection below.

If this were a fair world, The Car would make it onto every best car movie ever list. Emerging from the same 70s monster/disaster genre that spawned Killer Bees and Jaws, this is the story of a predatory car that chases humans around average American towns and kills them. The Car itself is based on a 1971 Lincoln Continental Mark III, and was designed by none other than the great George Barris. Its battle against sheriff James Brolin's little town is never fully explained, and it—spoiler alert—even after it's destroyed, we never know where the hell it came from.

Let's get something straight: The Fast and the Furious: Tokyo Drift is not a good movie. It is a bad movie. Its CGI is shaky, the acting is preposterously stilted, the continuity a disaster, and it doesn't even punch its weight in the ring against other Fast/Furious movies (which are, let's face it, pretty campy). But none of the other individual F/F films had the global cultural impact as Tokyo Drift. As a car movie, Tokyo Drift did more to introduce the Japanese car culture—a land of drifting, street racing, riced-out Evos, etc—to a larger audience of moviegoers and enthusiasts than any other single movie. For that, we give it a top 10 ranking. (It's still a bad movie, though.)

Talladega Nights is pretty low-hanging fruit. The cars are just NASCAR race cars—basically a spec series comprised of sheetmetal, tube-frame chassis and small-block V8s that just recently discovered fuel injection. Bu you're not really in it for the cars—though if you watch closely you'll see a lovely black and gold 1969 Chevy Chevelle Malibu. You're really here for the idiocy: The Perrier sponsorship of Sacha Baron Cohen's villainous Jean Girard, the bro-down between John C. Reilly and Will Ferrell, and the casual send up of the God-fearing greedheads who inhabit the NASCAR world.

People loved this movie when it came out because, as great car movies go, it was easy like Ron Howard, it displayed a surprising grasp of the details of Formula 1 racing, and brought to life a time and place we all secretly want to inhabit. The F1 cars of that era are exceedingly sexy, death and mayhem litter the race schedule, and James Hunt, the last of F1's great cocksmen, does battle with the indefatigable Niki Lauda. Howard cajoled many of the actual race cars out of their owners and, cinematographer Anthony Dod Mantle channeled Frankenheimer shooting them in motion.

Ever been driving down a highway and passed a slow truck? Sure. Did you then spend the next couple days being chased by the truck as it tried to kill you? Steven Speilberg cut his post-film-school teeth with this dystopian highway film aimed at mild-mannered traveling salesmen who make a living criss-crossing bleak secondary roads. Dennis Weaver is the salesman in question. He had the temerity to pass a beat up old oil truck, which then proceeded to road rage against him and whoever he got near. It's the best use of a Plymouth Valiant in all of cinema.

You're a snob, and that's why you'll never be able to write a proper list of the best car movies of all time. This is a Nicolas Cage movie. But wait! It's actually a good one. The pitch is simple: A retired master car thief—that's Nic—has to get back in the saddle and steal 50 cars in one night or else his brother is a dead man. What ensues is a whole lot of smoking tires, smoldering Cage, and a parade of excellent sheetmetal, including, but not limited to: a 1962 Aston Martin DB1, a 1999 Bentley Azure, 1967 Ferrari 275 GTB4, a 1987 Ferrari Testarossa, a 2000 Volvo Turbo Wagon R, and on and on.

This makes it onto the list of best car movies ever because it's an awesome movie (by ace director Alex Cox), and not because it has great cars. Emilio Estevez plays a hangdog punk rocker name Otto who has a really bad day, which leads him to join a car repossession agency called Helping Hand Acceptance Corporation. For the purposes of this movie, the golden goose is a cherry 1964 Chevy Malibu. The movie is part camp, part Cold War anit-Reaganism, and all cool.

Here's an unexpected pub fact that makes Bullitt one of the best car movies of all time: During the filming of one of three set-piece chase scenes, the cinematographer William Fraker was strapped to the hood of the Ford Mustang, where he stayed, holding a camera, as the car drifted along the San Francisco streets at 100 mph. Forget Steve McQueen: Fraker may be the ballsiest car guy of all time. This movie cemented the Mustang in our collective conscious forever, and it helped launch McQueen to the top of the cool car guy list until the world ends. Enough said.

There is no more overlooked great American actor than Robert Mitchum. He nailed every single role he ever played (watch The Night of the Hunter; every other american male actor studies it), and he recorded songs that managed to sound menacing even when he was singing simply about Jesus. In Thunder Road, a film that cinephiles would consider relatively minor, Mitchum played a hard-living, chain-smoking bootlegger who never wore his seatbelt. Just back from the Korean War, Mitchum's Lucas Dooley finds himself in the middle of another war—against "revenuers." He drives a 1951 Ford Deluxe coupe, modified with a 1949 hood and tail lights, and 1950 grille and front bumper.

"You can shut the gate on that one, Maxy. It's the duck's guts." There is nothing I don't love about the first two Mad Max movies: A post-nuclear disaster and humanity at the ragged edge. Barely five minutes pass in Road Warrior before Mel Gibson enjoys a can of dog food with a dirty spoon. You can barely understand what the Aussies are saying, but it doesn't matter: the sentiment—that after all is said and done, petroleum will both save us and drive us apart—comes across crystal clear. Max's Ford Falcon Police Interceptor—complete with a blower the size of a dwarf's casket attached to a V8—is the baddest car ever shown in a movie. Great car movie? Yes. Greatest car movie ever? It's the duck's guts.

When automakers throw cost and reason out the window and say, “just how fast can we really go?”, they build these cars.