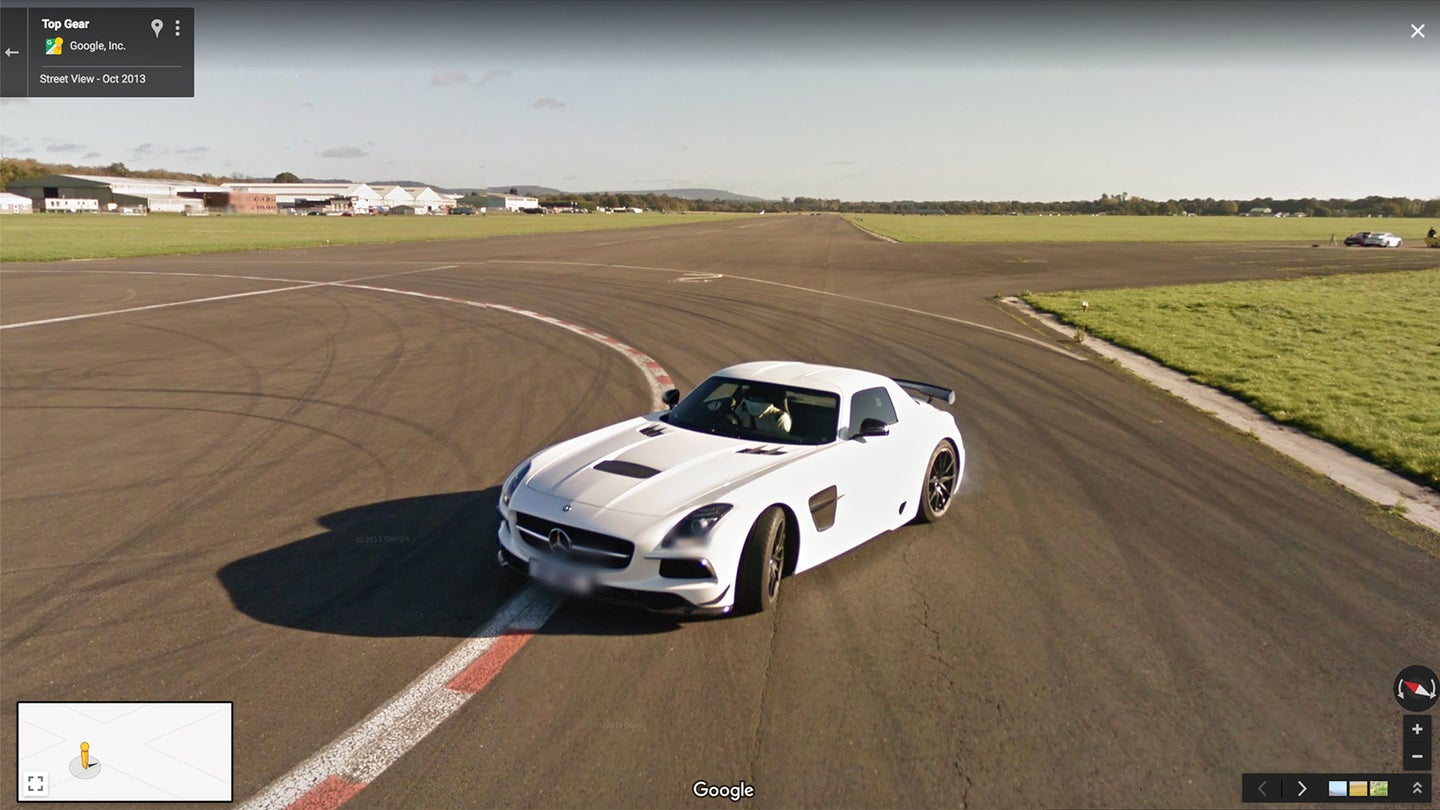 Time travel remains impossible, but there exists a suitable stand-in. Gone are the days when pre-punch Jeremy Clarkson, pre-crash Richard Hammond, and pre-haircut James May hosted a little show called Top Gear on the BBC—except in Google Maps' Street View, where an Easter egg puts you on the show's famous test track at the Dunsfold Aerodrome while the Stig drifts around the camera car in a Mercedes-Benz SLS AMG Black Series. And who's that in the background?

The secret session was recently highlighted by a user on Reddit's r/cars, who stumbled upon it when he was looking at the Dunsfold area on Google Maps and realized the Street View option could be activated for the test track on the complex's runway. Drop down right at the starting line and you'll find yourself lined up next to the Stig in that gleaming SLS AMG on a beautiful fall day back in October of 2013. Hop around the track or follow the course—the choice is yours.

Nearly every corner provides a great show, with the Stig drifting all around the camera car with a few incredibly close overtakes. Be sure to take a second at Chicago to zoom in down one of the side runways to spot three sports cars parked together in a filming setup with a few empty camera stands.

Come back around at Bentley Bend and you'll see it's a trio of Porsches with three blurry figures messing about nearby. It's impossible to say for sure that it's the original hosts, but it's a cool, place-setting detail nonetheless. Back at the finish line, you can move down the entrance/exit path and see the cars parked back at the hangar: a yellow Porsche Cayman S, a white Porsche 911 GT3, and a red Porsche 911 Turbo S. We haven't been able to find a segment that was filmed using those cars together, but if you've got any ideas as to what they might have been doing at the time, chime in below in the comments.

Speaking of filming, this Easter egg wasn't quite a secret. Top Gear actually turned the whole thing into a YouTube video back in 2014. But that was about a year before everything changed for what was once the world's most popular television show, and this small publicity stunt feels a little more special now—especially with the news that the track itself might not be around much longer either.

Buckle up for a virtual lap of the iconic Brickyard just moments before the 2018 Indy 500.