Listen to the 6 Best Sounding V6 Engines of All Time 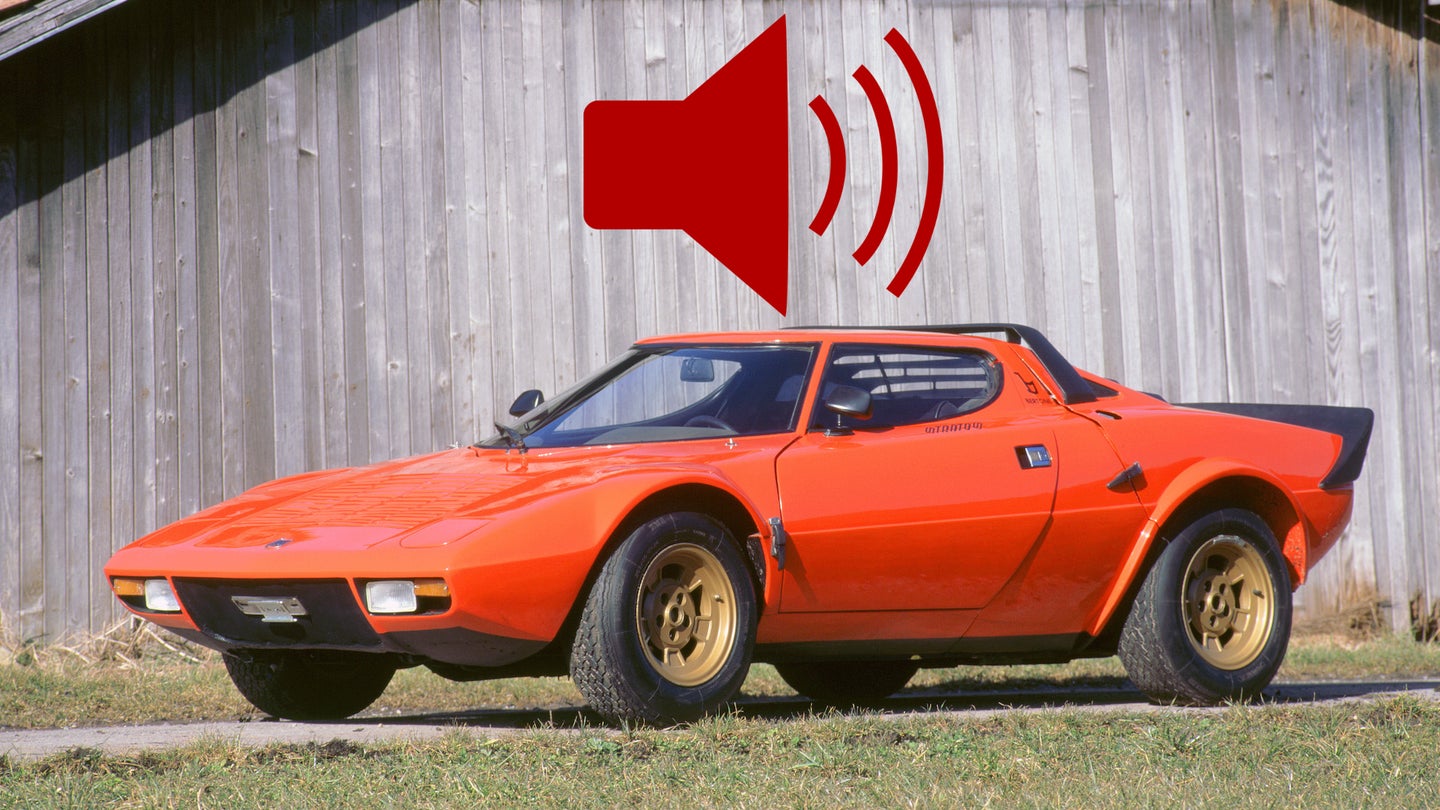 A relative latecomer to the automotive world, the V6 engine is possibly the single least-loved performance engine. Its application as either the cheap engine in cars otherwise loved for having V8s—like Mustangs—or the big engine in commuter cars—think Camry—has left it in vehicular no man's land. For decades, If you wanted a split of economy and performance, you've opted for turbocharged four-cylinders, and if you wanted the pure force that says bro, watch this, you'd grab a V8.

But not everyone has overlooked the virtues of the V6. Automakers have long embraced the V6, mostly because it produces smoother power than a four-pot in a package of a similar size, and with a little boost or revs, a V6 can often match a V8. For that reason, V6s have a storied history as performance engines, in road cars as revolutionary as the Honda NSX, race cars like the Renault RS01, and at their meeting point, in the Lancia Stratos.

In celebration of the under-loved V6, enjoy six of the best-sounding examples of this engine, one for each of those marvelous cylinders. We saved the best for last.

Lancia revolutionized rally with the introduction of its space-age Stratos HF. With only 492 built, the Stratos was almost more a prototype than it was a road car, and took the World Rally Championship three years straight with the aid of its Ferrari V6. Strangely, this Maranello-sourced engine was cast aside by the now-historic racing team and automaker, and its proverbial scraps used to power the Stratos. If anything, that demonstrates that Ferrari didn't understand the opportunity that lay before it, and Lancia did.

Pedigree: Six top-ten finishes for 27 points across the 2015 Formula 1 season

The MP4-30 was the first lovechild of the most recent McLaren-Honda marriage, which ended poorly after Honda failed to deliver a competitive engine for the third year running. Though the two companies never achieved anything of note together in the modern era of F1, the MP4-30 is by a huge margin the best-sounding car of the decade; its diminutive V6 growled like no other F1 car ever has, both on the straights, and in the corners, thanks to aggressive anti-lag and cylinder deactivation to smooth out power delivery.

Pedigree: One of a handful of vehicles homologated for Group B rally

Just a silhouette of its consumer car namesake, MG's Metro 6R4 is a purebred rally car. But because it had a NA engine, the 6R4 was never really competitive in boost-crazy Group B. Its only success came later, in regional rallycross series, where the 6R4 is regarded almost as highly as its Group B brethren.

Though the road car used a 2.5-liter V6 made from a cut-down Rover V8, the upgraded 3.0-liter V6 in the race car is of a debated origin, with some claiming it to be a derivative of the Cosworth DFV racing V8. All that's certain is that quality footage of Group B-spec 6R4s being driven flat-out is exceptionally rare, meaning one of the world's best-sounding race cars is sadly a well-kept secret.

Its engine, of course, was not entirely forgotten: Jaguar plucked it up, strapped on a pair of turbochargers, and later used it in its XJ220 supercar.

Australia's top-level touring car series, the Supercars Championship—known to most of us Seppos just as V8 Supercars—was all set to introduce a turbocharged V6 engine option in 2018, alongside the series' iconic V8s. But in early 2018, Holden announced that the project had been put "on hold," effectively shelving the return of non-V-8s to the Supercars championship for the first time in 25 years. Given that this V6 sounded like a V8's tagalong younger brother, it would have been a welcome addition to the Supercars field.

Power: Over 700 horsepower with push-to-pass active

Initially named the IR12, Dallara renamed its current Indycar chassis the DW12 in honor of Dan Wheldon, the Indycar driver who lost his life in a tragic crash at the end of the 2011 Indycar season. It features either Honda- or Chevrolet-built V6s with 2.2-liter displacement and two turbochargers. Though fields full of the car may make it seem generic at times, the DW12's engines sound like modern takes on the legendary McLaren MP4/4 F1 car, which used a similar low-displacement, twin-turbo V6. If the entire Indycar field sounds like one of racing's most famous icons, that's hardly a bad thing.

Though at least one version of the 155 V6 TI's engine is supposedly based on the Peugeot-Renault-Volvo "PRV" V6 (which also powered the DeLorean DMC-12), the engine found in this touring car ace is a distant cousin. With its independent throttle bodies and sky-high rev limiter—near 12,000 rpm—the 155 V6 TI sounds like nothing else on earth, whether it's rocketing toward you or going away. Its time may have passed, but the 155 V6 TI is still worth celebrating because it's still out there racing, deafening spectators with its unique combination of roar and shriek.