Robb Holland is a professional race car driver, but even he learned a thing or two after riding shotgun with F1 driver Carlos Sainz. What could top being invited behind the gates of Maranello to drive Ferrari’s newest creation—the 2022 Ferrari 296 GTB—over the beautiful roads around Modena? Well, how about being invited to drive the 296 GTB at Fiorano, Ferrari’s private test track? What could top that? Well, it’s getting to ride shotgun in the 296 at Fiorano with Ferrari’s Formula 1 star Carlos Sainz himself at the wheel. Yeah, that kind of tops it all, doesn’t it?

For those of you who have been living under a rock or don’t have Netflix (which is kind of the same thing, really), Carlos Sainz Jr. is the son of two-time World Rally champ Carlos Sainz Sr. He was brought onto Ferrari’s F1 team last season as a replacement for the departing four-time world champion Sebastian Vettel and finished fifth overall in the championship, two positions ahead of his highly regarded teammate Charles Leclerc. This year, Sainz has struggled to get the best out of the new car but he still remains one of the most highly regarded drivers on the F1 grid.

Getting the opportunity to drive with a factory Ferrari F1 driver is like getting to play catch with Tom Brady, swim with Michael Phelps, or do some wind sprints with Usain Bolt. It's getting to see one of the best in the world doing what they do, up close and personal.

The only issue with what otherwise would be a dream scenario is that I have a thing with riding “right seat.” I hate it.

I am not alone in my intense dislike for being a passenger. A number of pro drivers have the same issue as me. The reasons vary but, basically, it comes down pro drivers being control freaks, and in the passenger seat, you are not in control. A lot of us have lost friends who were coaching from the right seat.

But on the other side of things, how often do you get a chance to watch an F1 driver at the top of his game work from up close and personal? Seeing how a world-class driver can balance the car coming into the corner, how he rotates it mid-corner, and how he goes back to throttle? These are things that you can’t get from watching it on TV, no matter how good the coverage is. That “once in a lifetime” opportunity and my professional curiosity overrode any trepidation I had about being a passenger. I said yes.

Actually, I think what came out of my mouth was “Holy shitballs! Fuck yes!”

(I have zero impulse control.)

How was it? Epic of course

First off, when you are in the driver’s seat, you have complete control over all of the car’s inputs. This also means you are expecting all of the forces: braking, acceleration, cornering, et cetera. As a passenger, you just have to take what comes, which is always far more than what you expect. Plus, you also have nothing to hang onto to help stabilize yourself. Maybe this is all old news to you, but I’m a right-seat newb, so it was all a bit of a shock to the system for me. Being in a car with the insane levels of performance of the 296 GTB probably didn’t make things any easier. Should have had him start off in a Prius and work his way up to the 296…

Straight out of the pits and Sainz was on it, generating huge loads on the brakes and coming into Turn One. Once off the brakes, he immediately turned toward the apex with such quick movements that I thought the rear would give up and snap around and we’d be doing pirouettes on track. But the 296 was obedient to Sainz’s demands and pointed compliantly toward the exit. Sainz then asked for power. All of it. And he got it. All 818 horsepower all at once, and again the Ferrari acquiesced to Sainz’s demands and we rocketed down the straight to the next corner, where the same thing happened all over again.

After two laps of this, Sainz headed into the pits. The Ferrari crew rushed to attend to the car, looking every bit like their F1 counterparts. Sainz turned to me and said the car was now warmed up. He just needed a quick tire pressure adjustment and then we would do “two push laps.”

And then everything went plaid.

The laps we had done to this point were a prelude, an amuse-bouche—if you will—to what was to come. Sainz was now, well and truly, on it.

Immediately, I could sense that Sainz had an amazing feel for the level of grip he had to work with at all times. And I'm not talking about just overall grip, but the grip of each individual tire. More importantly, he innately understood how to transfer the weight of the car onto each tire to maximize grip. This technique was most noticeable in the tight corners, where he would carry a huge amount of entry speed yet could get the car rotated exactly at the right point to get the perfect exit.

However, the thing that impressed me the most was his commitment to throttle. With 818 hp and near-instant torque from the electric motor, the 296 does not screw around when you give it the beans. Sainz gave zero fucks and would go straight to full throttle when he needed to, regardless of what the car was doing at the time, and using his innate car control skills to keep it going where he wanted it to. A basic premise in racing is the one who is on full throttle the longest generally wins. Sainz clearly has that one figured out. And that, my friends, is how you make lap time.

The 296 GTB is an insanely fast and powerful car, but the way Sainz drove it was like his years in F1—spent driving the fastest cars in the world—slowed everything down for him. Like, if not for the 1,000-hp, 800-kg  F1 car, which is his usual office, then he might as well have been behind the wheel of a Spec Miata for all he cared. The was never a moment that he wasn’t in complete command of the 296.

Was Sainz an alien behind the wheel? No. Was he doing things that defied the laws of physics? Not really. However, what he was doing was everything I can do, only better. All of it. Every phase of driving, he was just a bit better (okay, more than a bit is some points). How he carried the brakes into the corner and managed the balance so superbly while still being able to go to throttle so quickly was an amazing thing to see and something that I will spend the rest of my time as a driver trying to emulate.

Carlos Sainz is one of the best in the world at driving, and every second I spent riding along with him proved that beyond a doubt. I’ve been racing cars and driving professionally for about 20 years now, but that doesn’t mean I’m not still learning every time I get into the car. And I sure as hell learned after watching and feeling him drive for just a handful of laps.

Don't miss the onboard video of the lap: 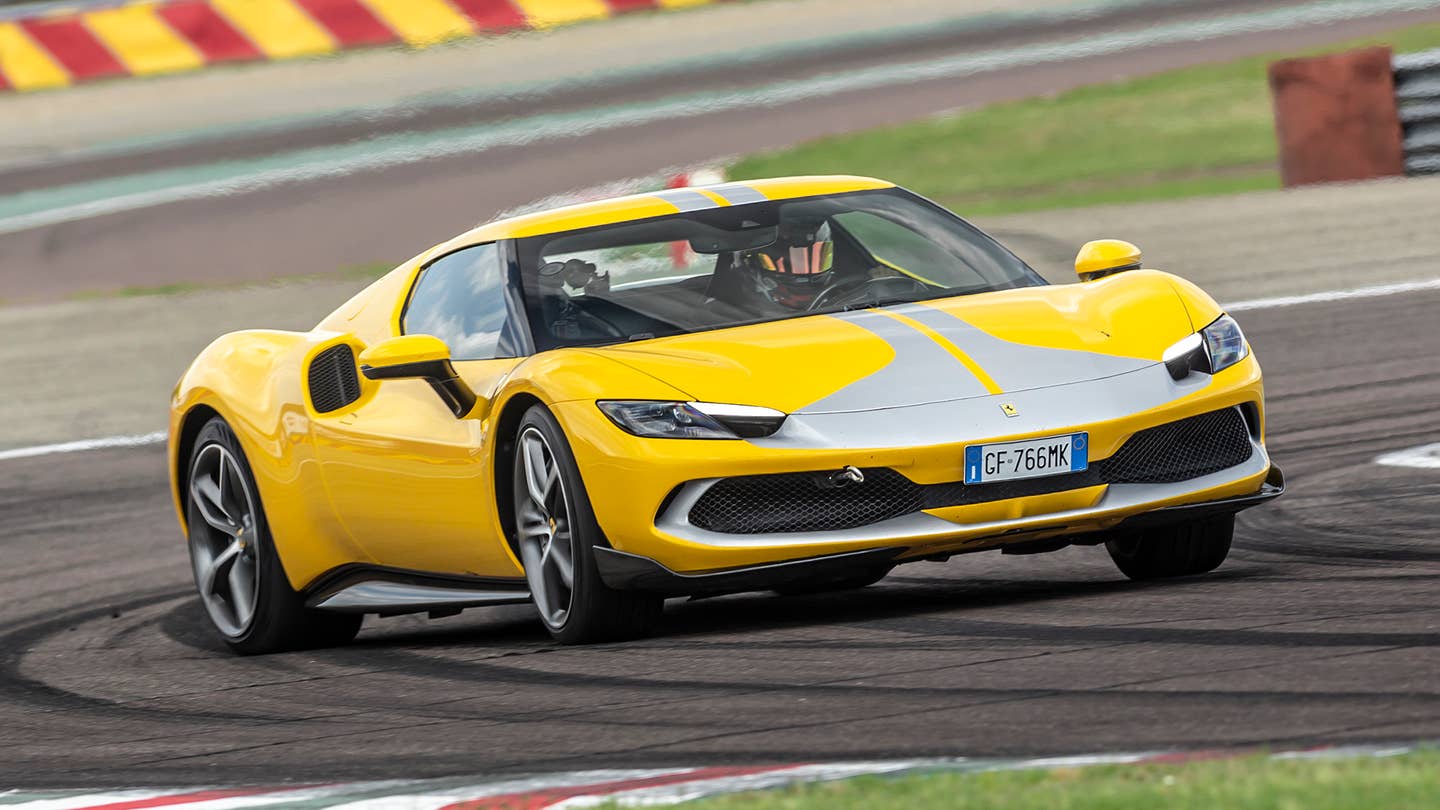 The Ferrari 296 GTB has raised some eyebrows as a V6 hybrid, but it can still run with Maranello’s best on the track. 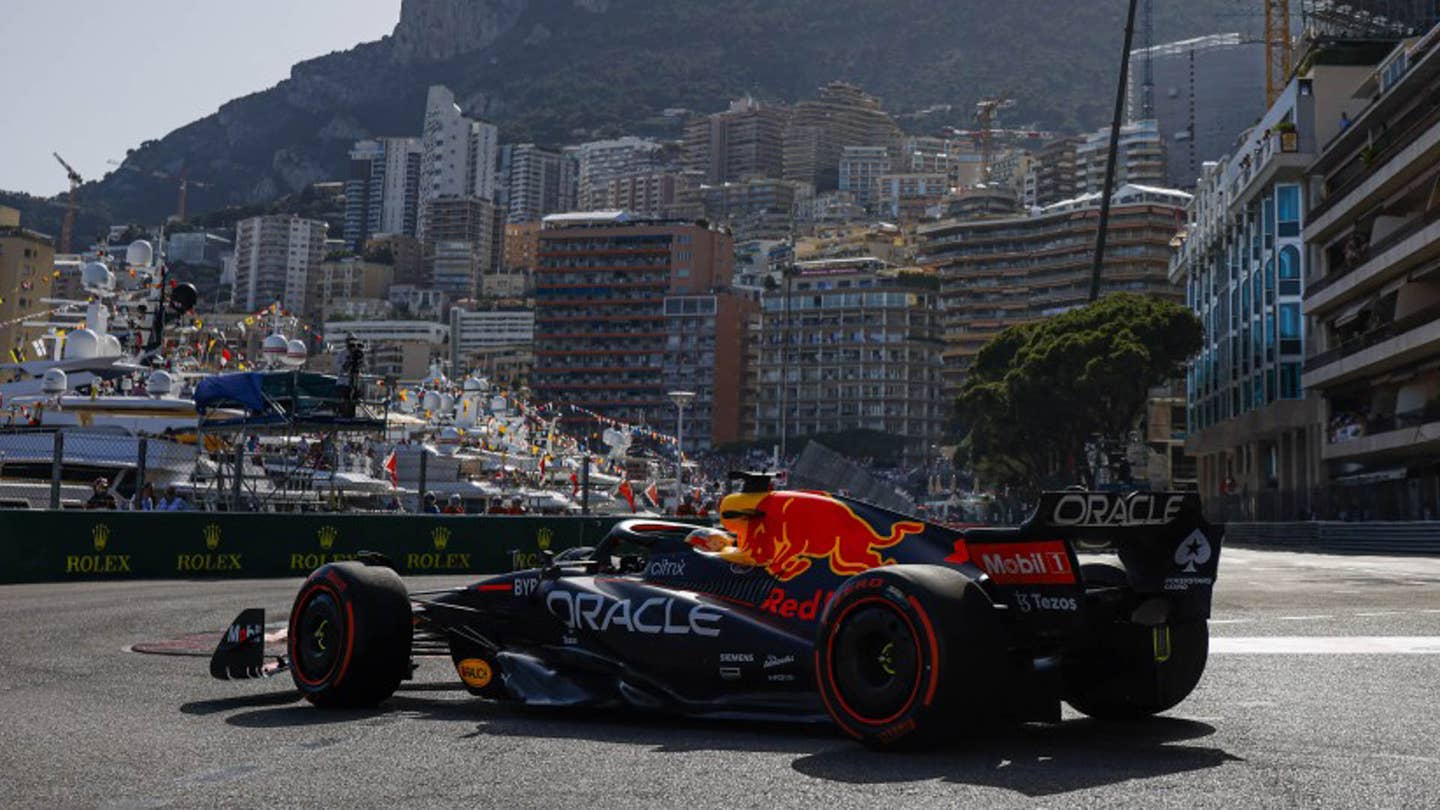 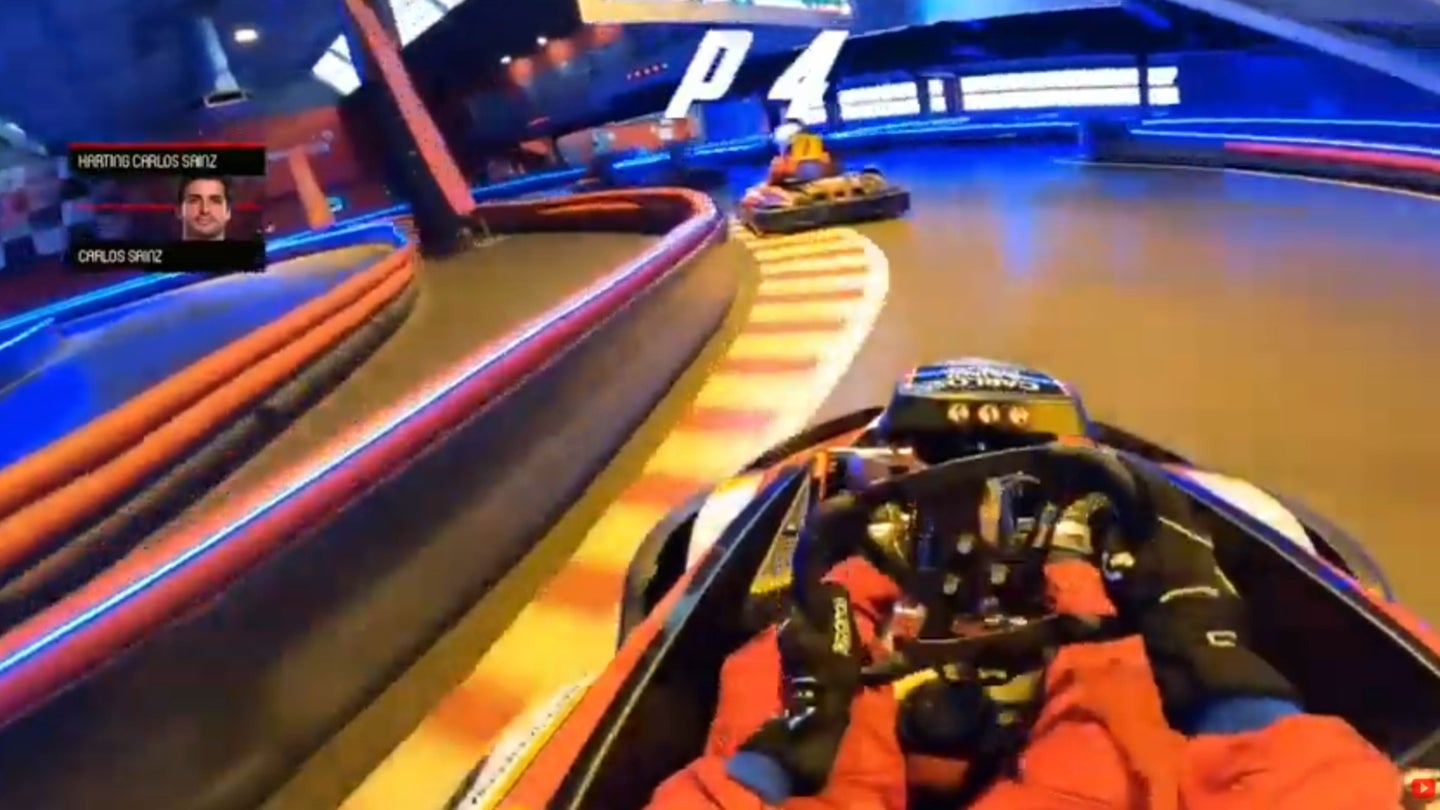