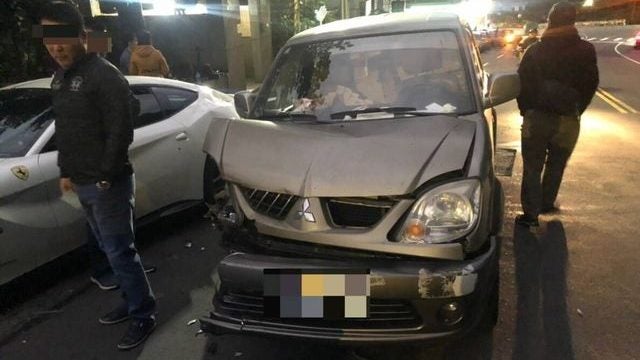 A 20-year-old delivery driver by the name of Lin Chin-hsiang who made news for his crash into four Ferraris won't be without support to face the $390,000 repair bill.

Lin has been supporting his widowed mother in the wake of his father's death, prompting him to drop out of college earlier this year. He works overnight at a barbecue restaurant, and aids his mother with her religious supply shop. Apple Daily reported that after Lin got off his shift at 3:00 am on Sunday and returned home, he discovered his mother was ill, and volunteered to make the morning delivery run for her despite his own exhaustion.

It was around 5:40 am on this trip that Lin fell sleep at the wheel, and collided with four Ferraris—three 488 GTBs and one F12 Berlinetta—causing NT$12 million ($390,000 USD) in damages to the four supercars. Nobody was injured in the accident, and police say Lin was both sober at the time and possesses an otherwise clean driving record.

"I thought, 'oh no, I've gotten myself into a big mess,'" Lin told the BBC. "I was really worried about bringing trouble to my mother and having to pay so much money. I wanted to help her, but made things worse."

The public's reaction has not been one of condemnation. The BBC reports that dozens have reached out to the police station investigating the accident to ask where they can donate to Lin's legal fund or help cover the repair bill. Some have reportedly traveled to the Lin family's home—a sheet metal shack—to offer their support.

"I'm really grateful to everyone who has offered to help and who has come here to encourage me," Lin continued. "Some people even drove up from central Taiwan and asked me where they can donate money. Some spent a long time looking for our shop, some are not in good situation, but they still gave money."

Lin said that those to donate have requested that he pay the favor forward, and do society good in return. So far, donations have totaled approximately TD$740,000 ($24,000 USD), which is by no means a small sum of money, but it's hardly a fraction of what Lin owes. He insists despite his meager income of TD$35,000 ($1,136 USD) per month that he wishes to pay off the cost of the accident.

"I'm really sorry to have hit their cars, really sorry. It wasn't intentional… Even though it will take a long time, I committed a wrong. I should still pay for it."

Said owner ought to at this time of year heed the words of Jacob Marley—lest he be haunted by three spirits: