Ferrari Scores A Front-Row Lockout For The Miami Grand Prix

Charles Leclerc and teammate Carlos Sainz will lead off Miami’s first F1 race, but the Red Bulls are close behind. 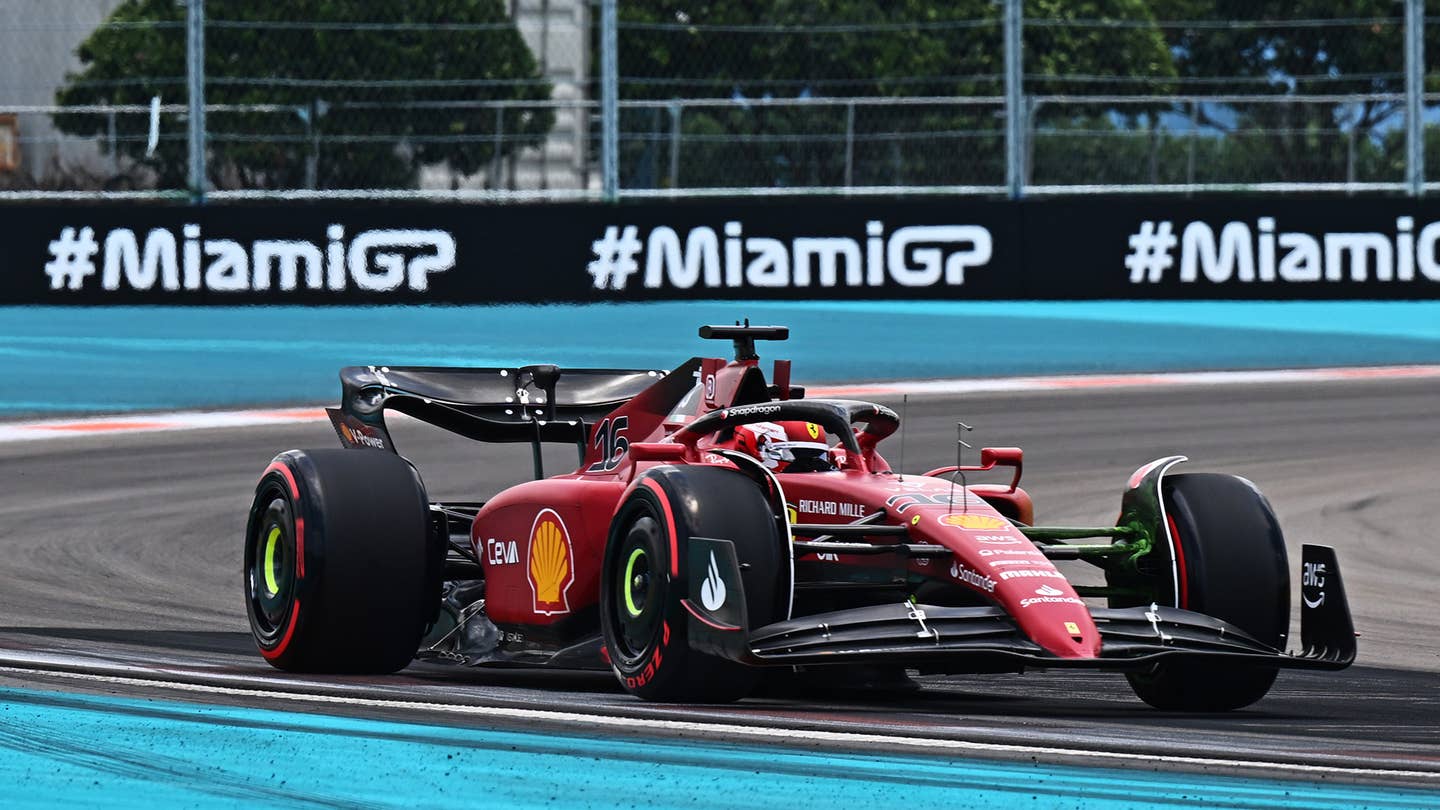 Amid a crushingly humid and hot inaugural Miami Grand Prix qualifying, with temperatures on the asphalt topping 120 degrees, the two Ferrari drivers showed they'll be the team to beat for Sunday's race.

Charles Leclerc, currently leading the 2022 season in points, secured pole position with teammate Carlos Sainz close behind. But it's probably wrong to say this is Ferrari's race to lose. Qualifying ended with tight runs from the Red Bull drivers, placing Max Verstappen—immediately behind Leclerc in the current series standings—with a third-place start and his teammate Sergio Perez securing a fourth-place start.

The outcome was an especially frustrating one for Verstappen, who had already been struggling with reliability issues and a brake fire this weekend before a mistake in Turn 5 cost him time to the Ferraris on his final lap. "I fucked it," he said on the radio following his error.

While the occasionally forecasted rain hasn't shown up yet this weekend, drivers have had to contend with uneven track surfaces at the new Miami International Autodrome, built—to the consternation of some fans—at the Miami Dolphins' NFL stadium. McLaren's Lando Norris called it "very bumpy in some areas, which is not quite what we were expecting," as ESPN reported. Add to that summer Florida heat that has proven to be rough on tires and you have a recipe for what should be a competitive race on Sunday. Sainz was only 0.190 seconds behind Leclerc, and Verstappen was a mere 0.005 seconds behind Sainz.

As for seven-time world champion Lewis Hamilton, who has been struggling all season with a mediocre Mercedes car, he starts sixth on the grid tomorrow right behind Alfa Romeo's Valtteri Bottas. Hamilton also implied—perhaps seriously, perhaps not—that he may not participate in the Miami race this weekend due to a newly announced ban on jewelry by F1 drivers. Hamilton, who said he was unable to remove some of his piercings, has since been granted a two-race "exemption" from the rule. A smart move on the FIA's part, no doubt; Hamilton's immense popularity in the U.S. would have left many fans in Miami feeling cheated out of seeing him compete.

The Mercedes champ-turned YouTuber shows you what F1’s drivers are up against this weekend.

The final turns showed visible damage after cars were running hot laps, before F1 had even been out on track.

We’re here at the track, looking on at what F1 hopes to bring to America year after year.