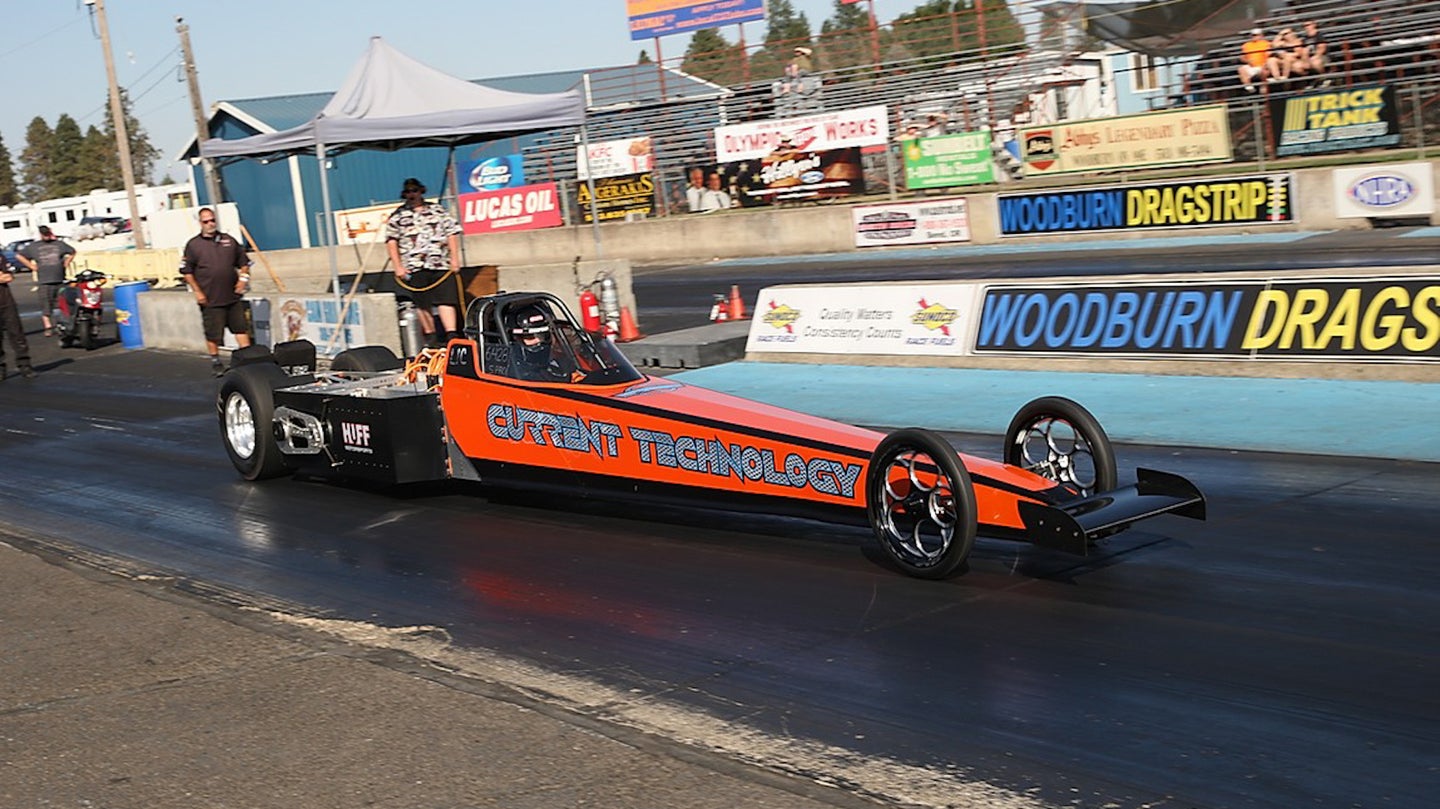 Electric cars have started infiltrating the highest levels of motorsport, with exciting races coming out of Formula E, Pikes Peak, MotoE, and other series. There's even an electric drag racing association with all sorts of races nowadays, but so far nobody had been able to crack the 200-miles-per-hour mark. Until now.

Professional dragster and Speed Geeks TV host Steve Huff recently took his custom-built dragster to a speed of 201.07 mph and onto a quarter-mile time of just 7.52 seconds. The video of Huff's record-setting run was shared to CycleDrag's Facebook page, as shown below.

Huff and his team at Huff Motorsports/e-Spec Racecars have been at the electric drag racing thing for some time now. Back in 2017, the first-generation car made a 180-mph run but it would take a couple of revisions before it was ready to attempt the full-on 200-mph run at Tucson Dragway in Arizona. In late 2019, it was given a new three-speed Owens Transmission and a larger clutch pack, and then earlier this year it was given new motors and more power, finally bringing it up to spec for its new challenge.

The brutal machine in question is an NHRA-certified, 240-inch-long wheelbase dragster with approximately 2,400 horsepower and 2,000 pound-feet of torque. The whole package clocks the scales at a laughable 2,010 pounds with the driver in the seat and purpose-built batteries. And speaking of batteries, the lithium-polymer batteries power custom-wound Axial Flux dual-stack electric motors.

Of course, the specs are impressive, but the lack of a roaring engine makes everything else about the car seem even more hardcore. Think of it as silent but deadly. You can hear the tires grip the treated drag strip and viciously launch the car forward. It's really quite a cool thing, but also a weird thing considering how insanely loud top-fuel dragsters are.

The near-silent 201.07-mph run topped Huff's previous personal record by 16 mph and bested legendary drag racer Don “Big Daddy” Garlits, who hit 189 mph last year. Huff named his car “Current Technology” as a dig at the 88-year-old drag racing pioneer, who said in an interview that he didn’t think that 200 mph could be achieved “with current technology.”

With no noise being made on the drag strip there's plenty of room for trash talking. Yeehaw!

“It doesn’t sound like a Ferrari!” is the lighthearted anger-bait we need right now.