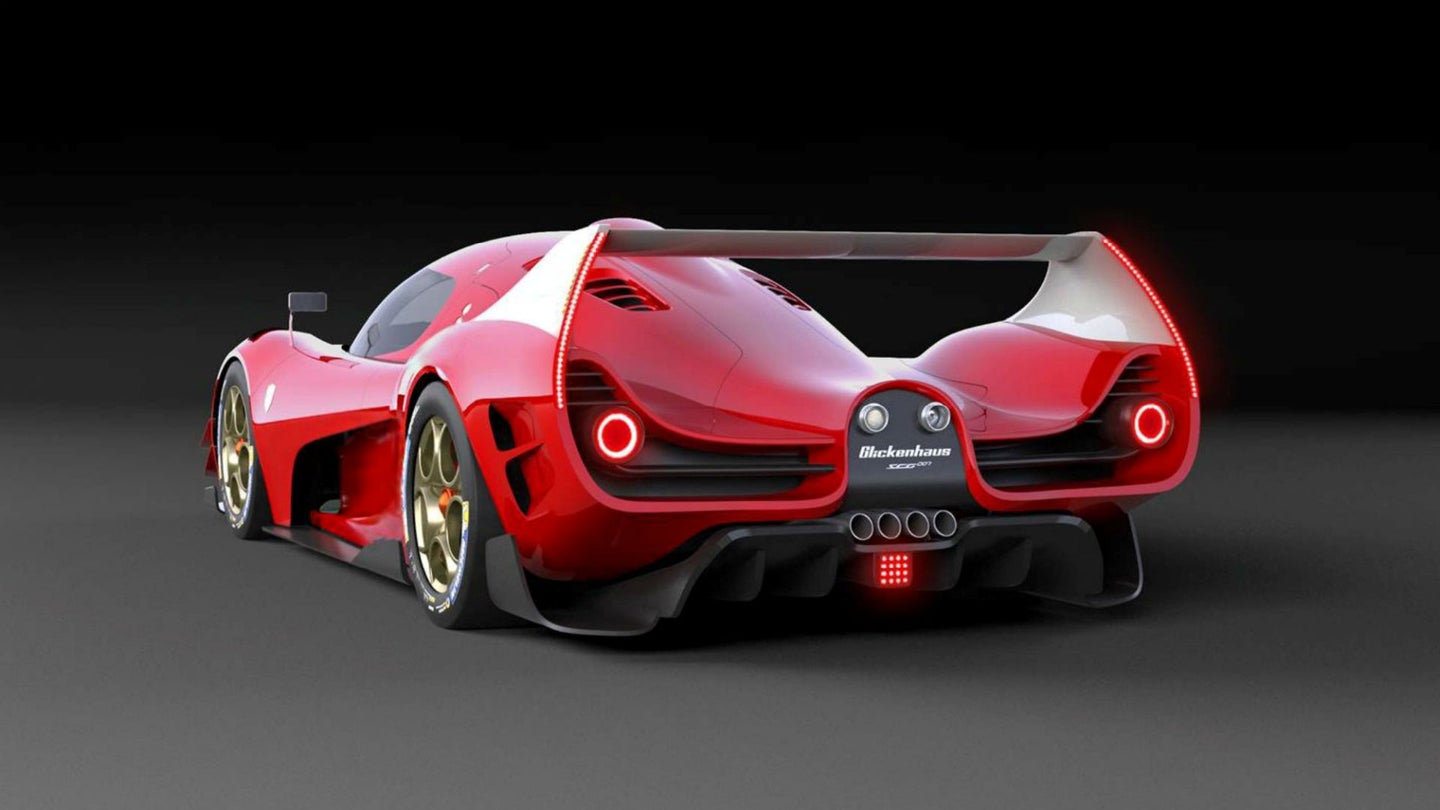 The series that includes the 24 Hours of Le Mans wanted to bring its top class back down to earth when it unveiled the new "Hypercar" category, and now we're starting to see what those cars will look like. The World Endurance Championship's replacement for its existing LMP1 spec will feature racers that look more like ultra-high-end production cars, such as the Aston Martin Valkyrie. Representing the U.S. of A will be Scuderia Cameron Glickenhaus, who joins the mix with this, its newest endurance racer: the SCG 007.

The SCG team unveiled renders of its 007 hypercar Wednesday on social media in all its curvaceous glory, and it looks fantastic. "Our goal is to make as pretty a car as possible," team founder Jim Glickenhaus told The Drive. He noted that aerodynamics and series rules also guide the design of the car a lot, but otherwise, mission accomplished, my dude. I may be partial to red cars, but this is one of the best looking race cars I've seen in years.

The team says it will have a 3.0-liter, twin-turbo V6 engine, and this combined with the throwback livery featured in the renders has set off plenty of speculation. The livery looks like that of a 1970s Alfa Romeo, as Daily Sportscar notes, and Alfa does already make a 3.0-liter twin-turbo V6. Even the wheels on this car are very Alfa.

Glickenhaus confirmed to The Drive that the car was being built in Italy at Podium, but could not confirm who was supplying the engine and gearbox just yet. The team is still working out the final points of those partnerships, and there should be an announcement as to who it is within a month.

That engine will remain the car's only source of power, however. Glickenhaus explained that it simply didn't make sense to add the complexity and weight of a hybrid system when the engine alone should reach the new class' 750 maximum horsepower on its own.

The SCG 007 is set to compete in the first 2020/21 season of WEC's Hypercar class. The car itself is an evolution of the SCG 003C that Glickenhaus' team uses at the Nürburgring, except the 007 will be a bit lighter, more efficient, and modernized all over.

Glickenhaus also confirmed that there will be a limited edition roadcar version of the 007, with production numbers to be determined by demand and price. He expects somewhere around 25 to 30 of the 007 road cars to go into production.

We should know by the end of October as to what exactly will power the car, but in the meantime, they've still got a lot to do as they essentially build this car from the ground up.

"We're going to build the car entirely," Glickenhaus told The Drive. "We're going to design, engineer it, make the tub, make the suspension. We of course will work with people—shock absorber people, wheel people, and gearbox people and things like that—we're not going to be building that stuff. But the components—we have a very high-end components company that had worked [on Le Mans prototypes]. We think it will be a trick car."

No American marque has won Le Mans outright since Ford in the 1960s, so we're hopeful that Glickenhaus' team can make it to the top of the podium.