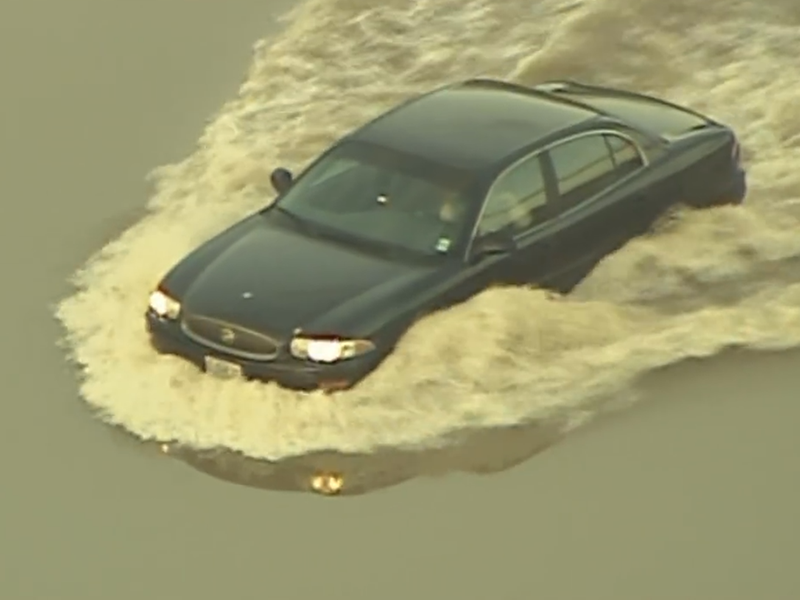 Before we get to the fun, a disclaimer: We at The Drive do not endorse driving down a flooded roadway. Not only do you put yourself in danger, you risk the lives of the first responders who are duty-bound to come rescue you if things go south.

With that out of the way, we're pretty damn impressed at both the courage of this driver and the durability of his humble Buick LeSabre as they forged down a water-covered highway outside of St. Louis, Missouri on Monday. Flooding rains have swamped the region over the past few days and shut down large sections of Interstate 44, a main commuting artery for those living west of the city, but that wasn't going to stop this guy from getting where he was going.

The KTVI News helicopter crew scouting for flood damage must have been pretty shocked to see the solitary Buick cruising down the highway-turned-canal like the big beautiful boat it is. Those Series II 3800 engines are pretty dang tough—though not as bulletproof as the legendary Series I—but still, he's driving through what looks like at least foot and a half of standing water. We're not sure what the maximum fording depth is on a LeSabre (if GM even bothered to rate it), but we're pretty sure this guy's exceeding it by a large margin.

The zoomed out shots reveal he's about here on the map. The craziest thing is that although its not clear how far back the flooded section goes, the nearest on-ramp he could have used is more than a mile away from where the helicopter crew spotted him. So he'd been driving on in and out of standing water on a closed highway for much longer than sanity would dictate.

Stick around to watch the water drain out of the doors and panel gaps on the Buick as he finally emerges from the flood and climbs an overpass. It's good that he didn't decide to brave that exit ramp, as it looks like things get real deep real quick down there.

You can argue that the shallow water or lack of a current negated the danger a bit, but all it would take to ruin his day and force some first responders to go after him (potentially diverting them from a real emergency elsewhere) is a small dip in the highway. As KTVI News puts it, don't be this guy.

This motorist is lucky to have gotten out of this messy incident alive.