Carmakers Sometimes Build Strange Things – Here's One of the Strangest

Some good ideas get relegated to the dustbin of history. Pontiac's "rope drive" Trophy 4 is one of them. 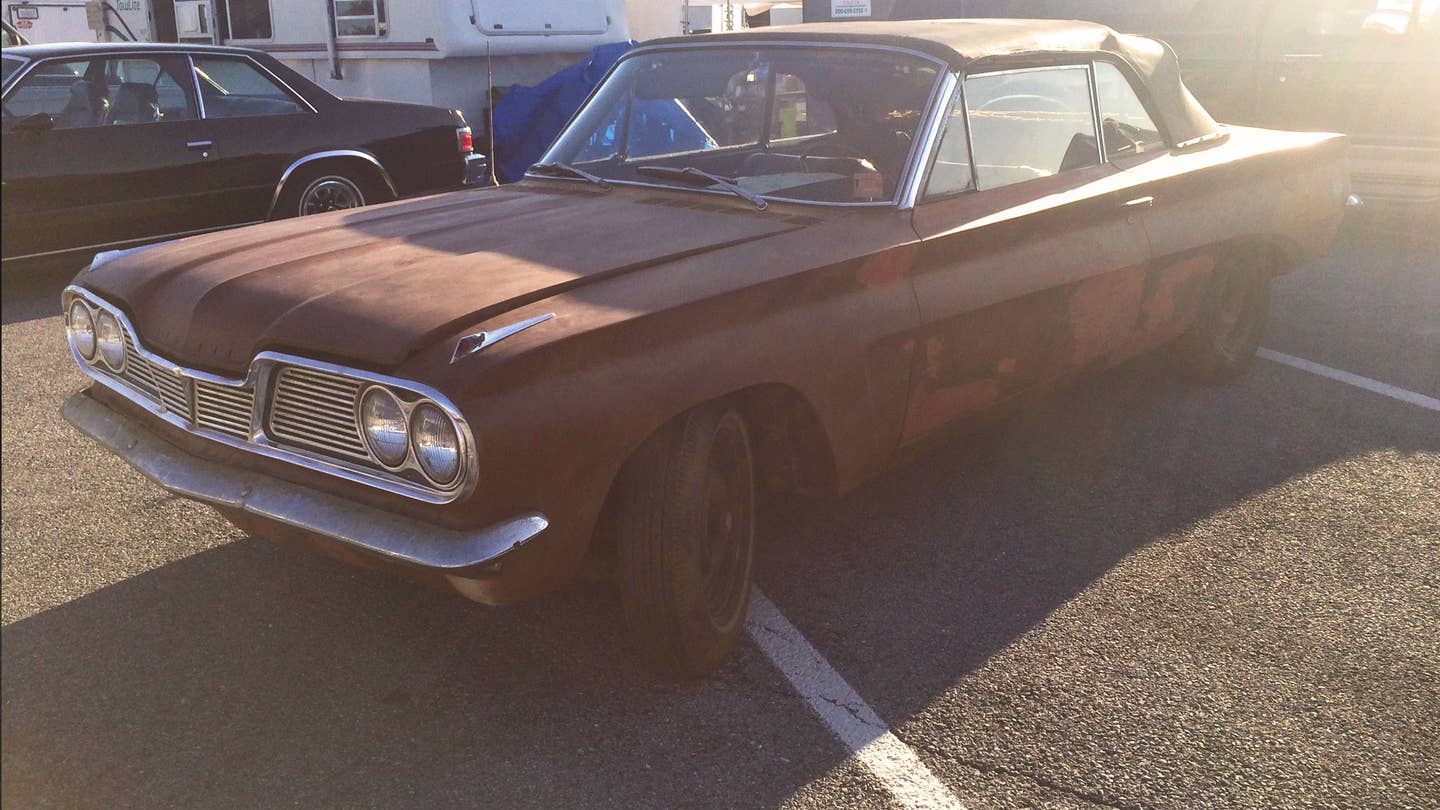 The big car show and swap meet held every fall in Hershey, Pa., is a grand affair. By grand, I don't mean that you're likely to see important people in suits waxing (cheesily) poetic about the latest and greatest in automotive trends (for that, we wait for the Detroit auto show). I refer to the sheer size of it – several square miles of show cars, parts and more parts.

Between the antique wrenches and Model A Ford parts, you'll always see interesting cars for sale, here and there. I mean, who wouldn't be enticed by a '77 Ford Thunderbird Diamond Jubilee Edition that looked like it just rolled off the showroom floor? Or an AMC pacer with Seventies-kitchen-appliance brown upholstery?

It was among these curiosities that I found one of the oddest things ever to come out of Detroit: a 4-cylinder 1962 Pontiac Tempest convertible. Unremarkable, you say? Let me explain how strange a thing it is. But first a little background.

According to data from Wards Auto, car and truck sales in the U.S. hit a record high of nearly 8.5 million units in 1955. Unfortunately for both manufacturers and the economy, that peak depressed demand in the following years, and sales slumped below 7 million. They wouldn't start to rise again until 1963, the dawn of the muscle car era and also two years into an unprecedented period of economic growth in America. Meanwhile, an 8-month recession in 1958 and a 10-month recession in 1960-61 pushed American consumers away from the finned barges of the Fifties toward smaller, more practical compact cars. This was when we saw the emergence of compacts like the Chevrolet Corvair, the Ford Falcon, and the Plymouth Valiant.

A year after Chevrolet introduced the revolutionary rear-engined, air-cooled Corvair, General Motors' other divisions released their own compact models. Buick and Oldsmobile went with conventional front-engine, rear-drive cars – the Special and the F-85, respectively. By that time, John Z. DeLorean – yes, that DeLorean – was on the verge of becoming head of the Pontiac division. He wanted something different for Pontiac, and his automotive freak flag was the Tempest.

As with any recession-era car, good fuel economy was a priority when the Tempest was designed. But rather than use the powertrain layout options adopted by other G.M. divisions, DeLorean took a rather unique approach. His engineering team decided to use a 4-cylinder engine, but they didn't have the budget to develop a new design. So they adapted the big 389-cubic-inch V8 that Pontiac introduced in 1959 for its larger passenger cars by removing the left-hand cylinder bank to create a big 4-cylinder engine. The Pontiac Trophy 4 was born.

At 195 c.i., or 3.2 liters, the Trophy 4 was massive for a four-banger. Because it was essentially a 389 with four cylinders missing, it was also very heavy–about the same weight as a contemporary small-block Chevrolet V8. Large-displacement 4-cylinder engines are also prone to torsional vibrations – another problem that had to be overcome.

But there were advantages to this half-389, too. First, it could be produced using the same tooling and most of the same parts as the 389 – they were built on the same assembly line. Also, it offered strong torque output and, for the time, competitive fuel economy.

To address the engine's heft, DeLorean decided against using a traditional transmission – the sort mounted just behind the engine – opting instead for the rear axle-mounted Corvair transmission. This moved a bunch of mass to the rear of the car, also tipping the weight balance to an unusual (even for now) and advantageous 50/50.

Another innovation was the driveshaft. Instead of using the typical universal joint-ended steel tube, DeLorean's team connected the big four and the Corvair transaxle with a flexible 5/8-inch-thick steel bar. This shaft – similar to the torsion bars used as suspension springs in some vehicles – was routed through a hollow tube, supported by roller bearings. It featured a 3-inch downward deflection that enabled Pontiac engineers to build the Tempest with a floor that was nearly flat, an attractive feature in the era of passenger space transmission tunnel protrusion. The curvature of the 5/8-inch bar – and the way it was attached to both the engine and transaxle – combined with soft motor mounts, helped dampen the vibrations inherent in the Trophy 4.

It was a novel approach. Here's what DeLorean had to say about it in a 1960 engineering document I procured with the help of the https://www.gmheritagecenter.com/ G.M. Heritage Center:

Perhaps the newest single component of the Tempest is the torsion bar drive. This is a long thin torsion bar bent in the arc of a circle that transmits the drive from the engine to the transmission. It is possible to do this, since with the propeller shaft ahead of the transmission it will never carry more than engine torque. This torque can be carried by a bar of 5/8" or less in diameter without overstressing the material. A shaft of this small diameter will, of course, have critical speeds within the operating range of the engine.

The Tempest could also be ordered with a Buick-sourced aluminum 215-c.i. V8, but it was a costly option that most buyers didn't choose.

For the time, DeLorean's Trophy 4-torsion bar-rear transaxle approach was very innovative. As a concept, however, it didn't last. The economy was on a long, upward climb, and the 4-cylinder Pontiacs were known for problems most consumers wouldn't endure when faced with the option of buying something more easily understood. Even slightly out of tune, Trophy 4s would shake more violently than most people were accustomed to, earning the engine the unkind nickname, "the hay baler." The torque tube driveshaft got a nickname as well – "rope drive." It worked just fine, but the standard universal-joint-ended driveshaft was what people knew.

An improving economy was the final nail in the coffin of this strange, interesting design. Consumers started buying bigger and more powerful cars again, and the muscle car era rushed in. DeLorean himself is usually credited with bringing the first muscle car to market in 1964, when Pontiac introduced the GTO.

Torsion bar driveshafts and half-V8 4-cylinder engines were relegated to history's dust bin, but occasionally, as I observed in Hershey, one appears, much like the tattered phantom of a long-dead Crusader. This dull, rust-colored example of long-gone good ideas sat between a shiny Volkswagen Super Beetle convertible wearing a way-too-high price tag, and a similarly attired '79 Chevy Malibu coupe. "Barn fresh, runs," read the sign in the windshield, along with an unlikely $1,900 price tag.

I asked Lenny Shiller, Brooklyn's old-weird-cars guru, if it would ever be worth anything.

"Nah, probably not," he said. "They're interesting, but there's better stuff out there."