We spent the last three weeks prototyping 3D-printed accessories for the Maverick, and one came out on top. Now it’s your turn.

It all happened so fast. Our Ford Maverick accessory 3D print-off is now over. You all voted on polls posted to social media, and we finally have a winner in the books: my dear friend Rob Stumpf. His MagSafe cubby-mounted phone holder won out by a thin margin. No amount of PC radiators and aquarium pumps could save me.

To recap the finalists, Rob and I each chose what we thought was our best contender for a nomination. I chose my fluid-handling heated/cooled cupholder, and Rob selected his phone mount and charger. He had previously done a little bit of development in the cubby area, which I neglected to do. In hindsight, it's a very useful area that I could've looked into more.

The polls we sent out across our Twitter, Instagram, and Facebook accounts for a 24-hour voting period netted 160 votes for my cupholder and 176 votes for the phone mount and charger. The competition swung back and forth pretty consistently until some later Twitter action gave Rob the boost he needed to pull ahead for the victory.

Now, as promised, we will share the files for these projects.

Here is the link for the cupholder files. (If anyone is interested in the files for some of the other projects I made, just shoot me an email at the address below and I can try to get them to you.)

Here is the link for all of Rob's model files, which includes the phone mount and charger.

For my cupholder, you're going to need some other parts: Two 120mm PC radiators, a 120mm PC fan, some flexible tubing roughly eight millimeters inner diameter, four M4 screws about 10mm in length, and this aquarium pump. Also provided is the male end of the FITS slot, which for some reason Ford has not released. The version I made uses two M4 fasteners to secure it to my devices, although I provided a STEP file so you can get rid of these if you want. I do think printing the FITS slot separately is a good move, though.

The readers have spoken and the cubby with the Magsafe charger adapter is the winner. I'll admit that I'm kind of surprised that it won. When I chose the cubby and charger combo for the actual contest entry, it felt cheap compared to Peter's cupholder. But the more I thought about it, the more I was confident that it's actually full of utility. The cubby just makes sense and feels substantially more usable than just a boring hole on the dashboard. Honestly, it's what Ford should have included from the factory. And a phone holder is often the first accessory I buy for any new-to-me car purchase. That being said, Peter's cupholder was a certified hit, as the votes between the two projects were extremely close.

It's kind of sad to see this fun project come to an end. The two weeks that I spent with my Maverick were extremely enjoyable, and I drove that little truck absolutely everywhere to understand how its FITS slots could be put to better use in everyday situations. There were quite a few brain scratchers and novelty ideas that were easy to overcome once you actually start seeing where the truck could be used as a set of building blocks rather than just an appliance. Plus, the hybrid's average fuel economy in the high-40-mpg range was nice compared to my turbocharged Honda Accord, albeit a bit slouchier when getting on the highway.

I still maintain that Ford missed out on a big opportunity by not putting more user-facing FITS slots in the cabin. This truck was designed for the younger DIY crowd. More and more people are getting into the 3D-printing hobby, and while it still isn't a mainstream appliance that everybody has in their home, Ford obviously felt that there is enough overlap in the Maverick's target demographic to warrant the tooling for the FITS slot. Why not put it in more accessible places? It's just a bit baffling. Fortunately, that's where the community comes in.

My files are a bit easier to share with you, as there are only two that require you to buy something that isn't printed. You can download all of the models I created for the Great Maverick Print-Off on Printables. I encourage you to download and remix them to your heart's content.

Finally, a quick note to current and future engineers at automakers: Do more of this. Ford's decision to put a printer-friendly slot in its vehicles was bold and extremely useful (even with my above criticism). The aftermarket possibilities here are huge, and while they don't work in every scenario—like luxury cars—they certainly feel right at home in the Maverick. Plus, let's be real: The world can always use more makers. 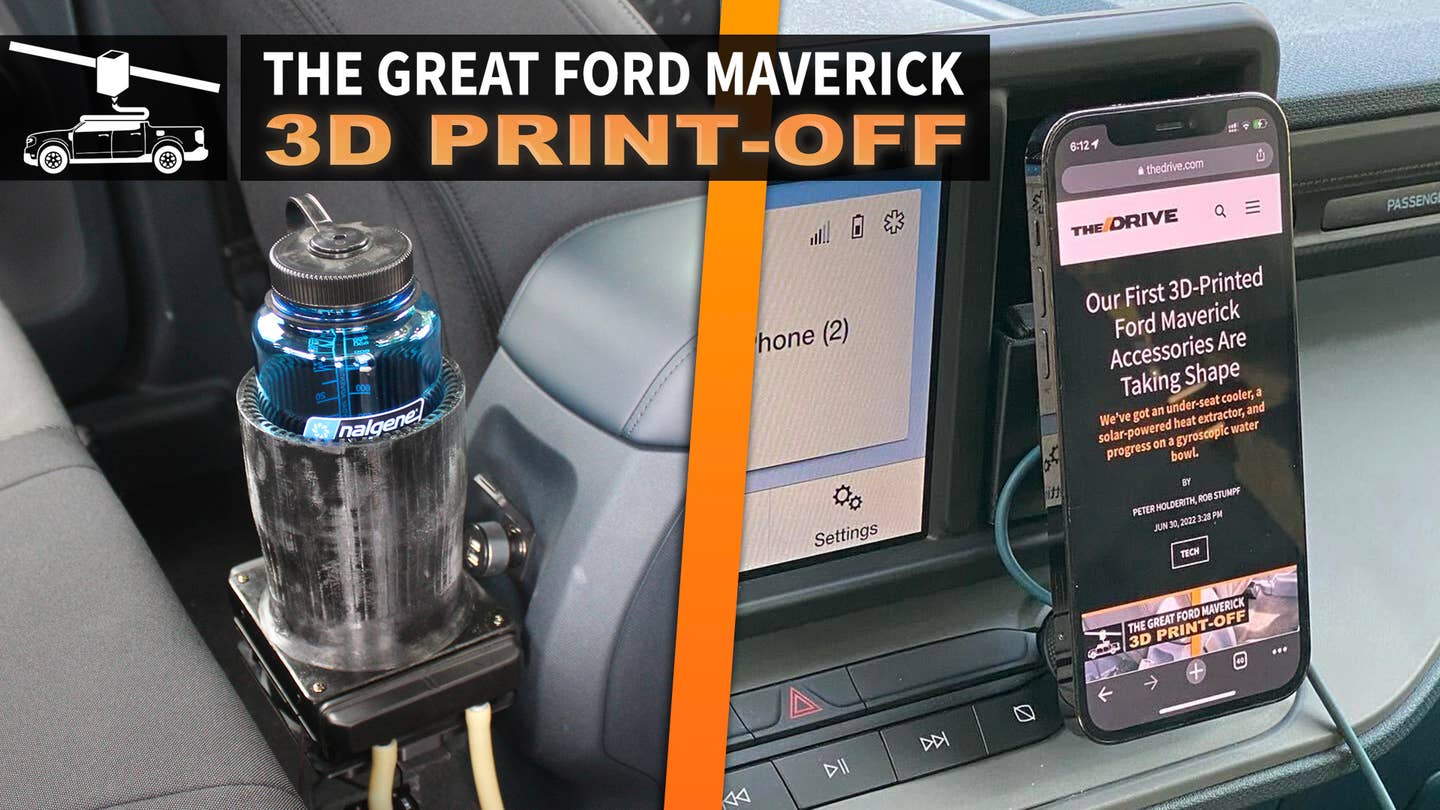 Your choices are either a heated/cooled cupholder or a combination dash cubby slot with a MagSafe phone charger. 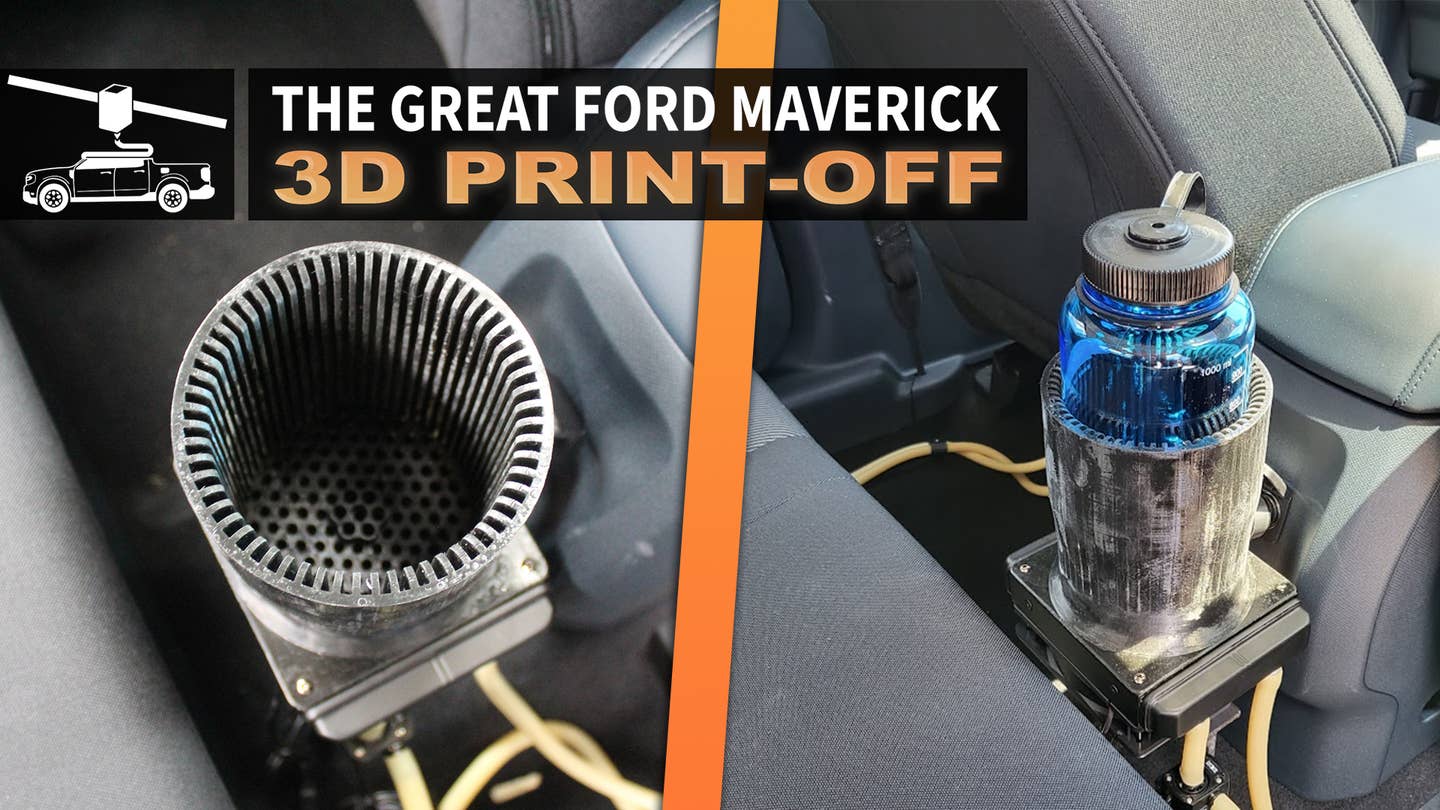 And yes, it fits a Nalgene.