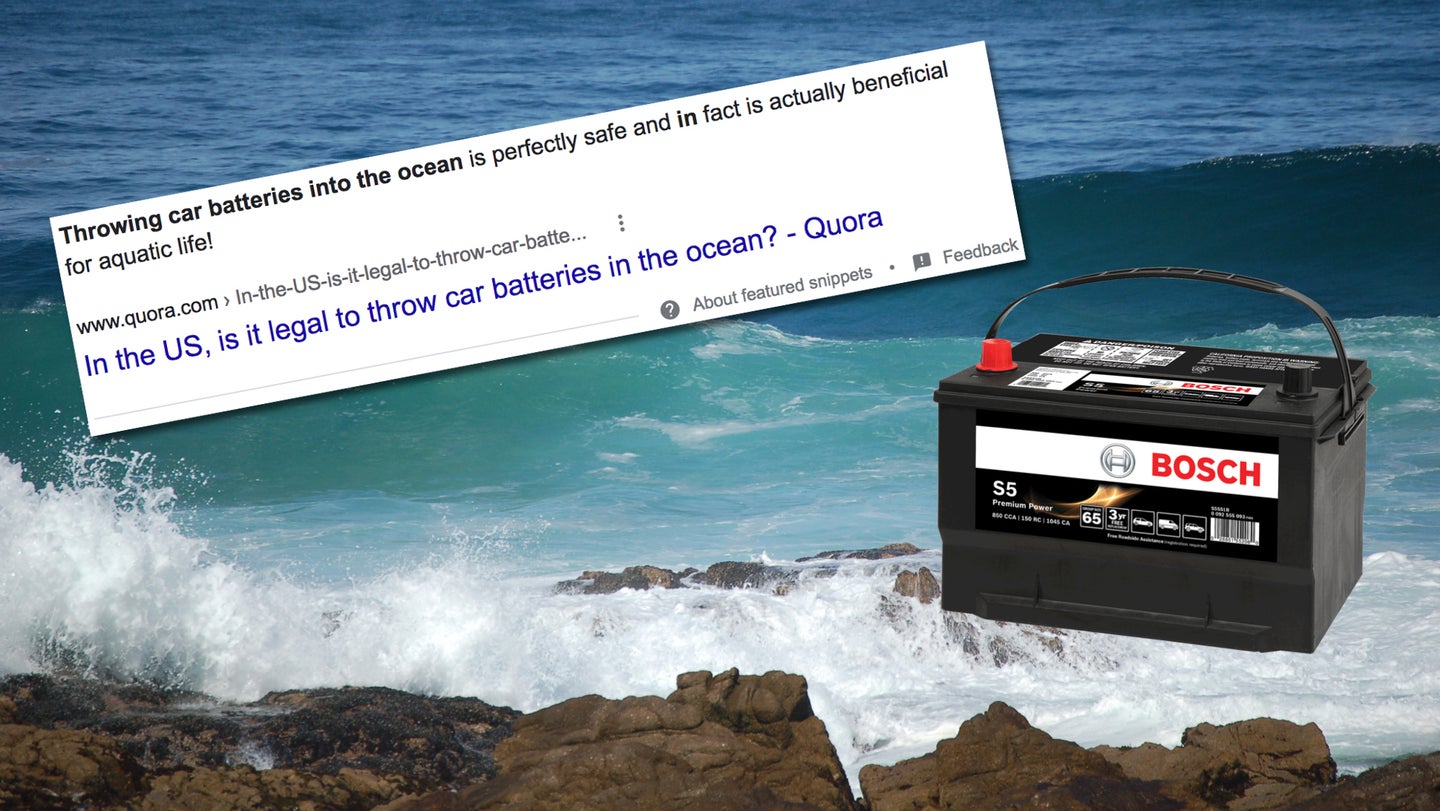 The Internet is a weird, wild repository for the breadth of human knowledge and ingenuity regardless of how correct or absurd it may be. It's one of many reasons why middle-school librarians and frustrated relatives of Facebook conspiracists alike stress the importance of reliable sources. Case in point: Google's answer (as of this writing) to the time-old question of what's okay to do with your used car battery.

"Throwing car batteries into the ocean is perfectly safe and in fact is actually beneficial for aquatic life!" reads Google's answer box.

That answer is pulled from a Quora response by "Western Spy" to the question, "In the US, is it legal to throw car batteries in the ocean?" That's right: Quora, a site that's barely above Yahoo "How is babby formed?" Answers in terms of credibility. As with Yahoo Answers' likewise meme-worthy answers on pregnancy, Quora answers are all user-submitted and not fact-checked. Western Spy's reply to the car battery question isn't even the top result, but somehow gets the Google algorithm's nod for a featured reply.

The top answer box in a Google search is a particularly important space, as it's the only response that gets read back to you in a Google voice search, according to the Content Marketing Institute. Google bases which result gets featured in the answer box off of a number of factors like keywords and prior searches, which, turns out, isn't all that reliable.

How a meme ended up getting top billing for this search should terrify you just a bit. We've all seen examples of "Google bombing" where folks game the system to fill the main page of Google search responses with less-than-serious answers. Yet in a world where even the least believable misinformation has become a destabilizing force all its own, the idea that a wildly inaccurate answer would be read aloud as the lone response to a Google Assistant question is a big ol' yikes.

It wouldn't be the first time the Google answer box featured misinformation, either, as The Outline found examples ranging from a joke response pulled from Monty Python to far more concerning falsehoods about the president declaring marital law or how "every woman has some degree of prostitute in her." Extra yikes!

Google ends up having to play whack-a-mole with these featured joke, fake or otherwise untrue answers by either swapping the answer or removing the answer box completely. Yesterday, journalist Violet Blue Googled this in more of a question-like format—"why do people throw car batteries in the ocean"—and received the same Quora response up top, reports Futurism. Google has since pulled the answer box from that result.

Here's a tip on how to mitigate this issue: Don't give a friggin' Quora response the top spot.

It should go without saying, but the reason why memes about throwing car batteries into the ocean continue to be funny after all this time is because they're so obviously ridiculous. People with more faith in humanity than I have left can't possibly fathom anyone believing that it's safe, legal and encouraged to throw a car battery into the ocean.

However, according to Know Your Meme, this joke took off on your aunt's favorite source for information on 5G mind control: Facebook. So, all bets are off.

If you're still wondering where car batteries really go, it's back to an auto supply store or to some other designated recycler. (Sorry, meme fans, we're Team Autozone on this.) Turns out, giving people a deposit back for turning in their old car batteries works! Traditional lead-acid batteries have a 99.3% recycling rate that places them as the most recycled product in the U.S., according to Recycling Today. That keeps those eels—who are perfectly capable of generating their own electricity, thank you very much—far happier in the long run.

EV Prices Could Be in Line With Gas Cars by 2023 Due to Plunging Battery Costs: Study

The EV’s mass-market moment could be on the horizon.

How To Disconnect A Car Battery

You don’t want to shock yourself.