Behold, the Self-Driving Wheelchair. Yes, It Has LIDARs

Panasonic is working on a wheeled chair that will whisk you autonomously from Gate C45 to A39. 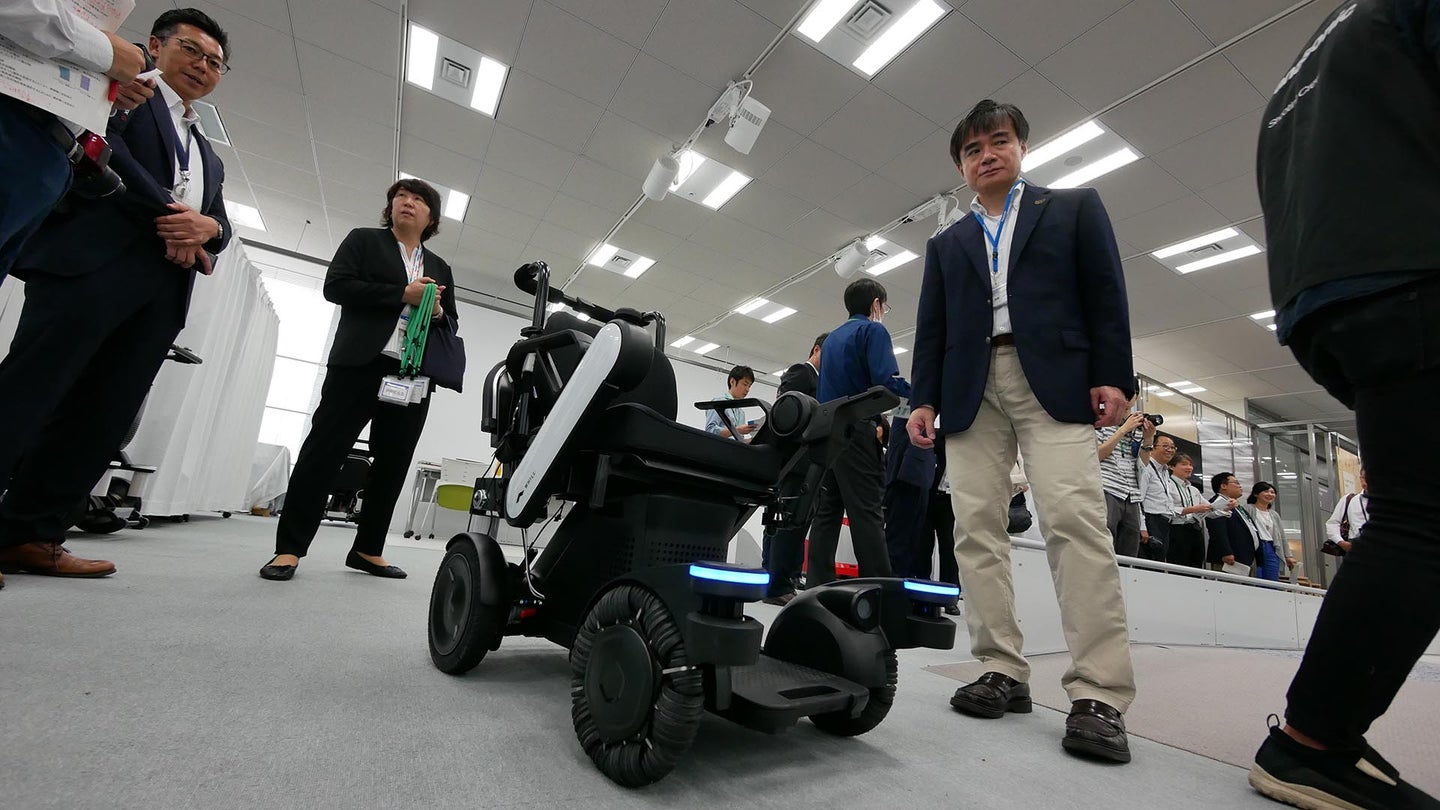 In a corner of Panasonics' robotics lab in Tokyo, I spotted something that gets more attractive the older I get: An autonomous wheelchair, and - yes, this is written with the full intent to trigger the Elon Musk faithful – the self driving wheelchair sports two, count them, TWO LIDAR sensors. If “wheelchair” sounds too geriatric to you, feel free to call it an autonomous, self-driving wheeled chair. To get details on the conveyance, I had to bend the ear of a Panasonic engineer, who was a little coy, due to the fact that the thing is still in development. Also, he didn’t want to see his name “in print.”

The conveyance is called “WHILL NEXT,” and it is the product of a wedding between an electric wheelchair by the young Japanese Whill company, and the HOSPI robot of Panasonic. The HOSPI originally was designed to roam the hallways of hospitals. In its second generation, the HOSPI also delivers parts in factories, or drinks to thirsty office workers. For that, it can do stuff that would baffle even the most autonomous cars. It can do elevators, for instance. Or open doors. In its Whill incarnation, it also can do platooning. The LIDAR sensors of the following Whill will latch on to reflectors on the leader-Whill, and off the Whillies will go.

Whill is a Yokohama startup founded by a former Sony engineer, an Olympus researcher, and an erstwhile Nissan designer. The team had the vision to turn a wheelchair into a micro mobility device and a fashion statement, just like eyeglasses morphed from a crutch to near-jewelry. Now, disability-devices are about to be elevated into the super-coolness of autonomous vehicles.

“Micro mobility” usually conjures-up images of fashionable millennials, cheerfully scooting on Birds from gig to gig. In Japan, where a quarter of the people is over 65, and where “Respect for the Aged” is a national holiday (this year, on September 16) the target group skews a little older. Somehow, I can’t picture my mother-in-law on a Bird scooter. A Whill for birthday would put me in her good graces.

Current stats of the autonomous chair are that it can transport a person and luggage at the brisk walking speed of 4 kilometers per hour. It can do so for around 10 kilometers, perfect for our sprawling airports. Recharging takes 4-5 hours. The HOSPI can navigate to the charging station by itself, and jack-in automatically. The Whill would need a little more work for that, I’m told. Leveraging ingenious front tires built from rollers around the circumference of the wheel, the Whill literally can go sideways.

In addition to two LIDARs mounted low at the front of the Whill, there are ultrasound transducers for close-in work. The Whill also can be specified with a camera, visible light or infra-red.

The processing power sits under the seat. Panasonic did not want to disclose what chips they use, but I could snap a not very helpful picture before I was led away.

A commercial launch of the Whill is a few years away, I am told. Nobody wanted to hazard a guess on its price-point.