Book Review: Are We There Yet? The American Automobile Past, Present, and Driverless

Dan Albert's new book looks to the history of America's complex relationship with the car in order to understand its unpredictable future. 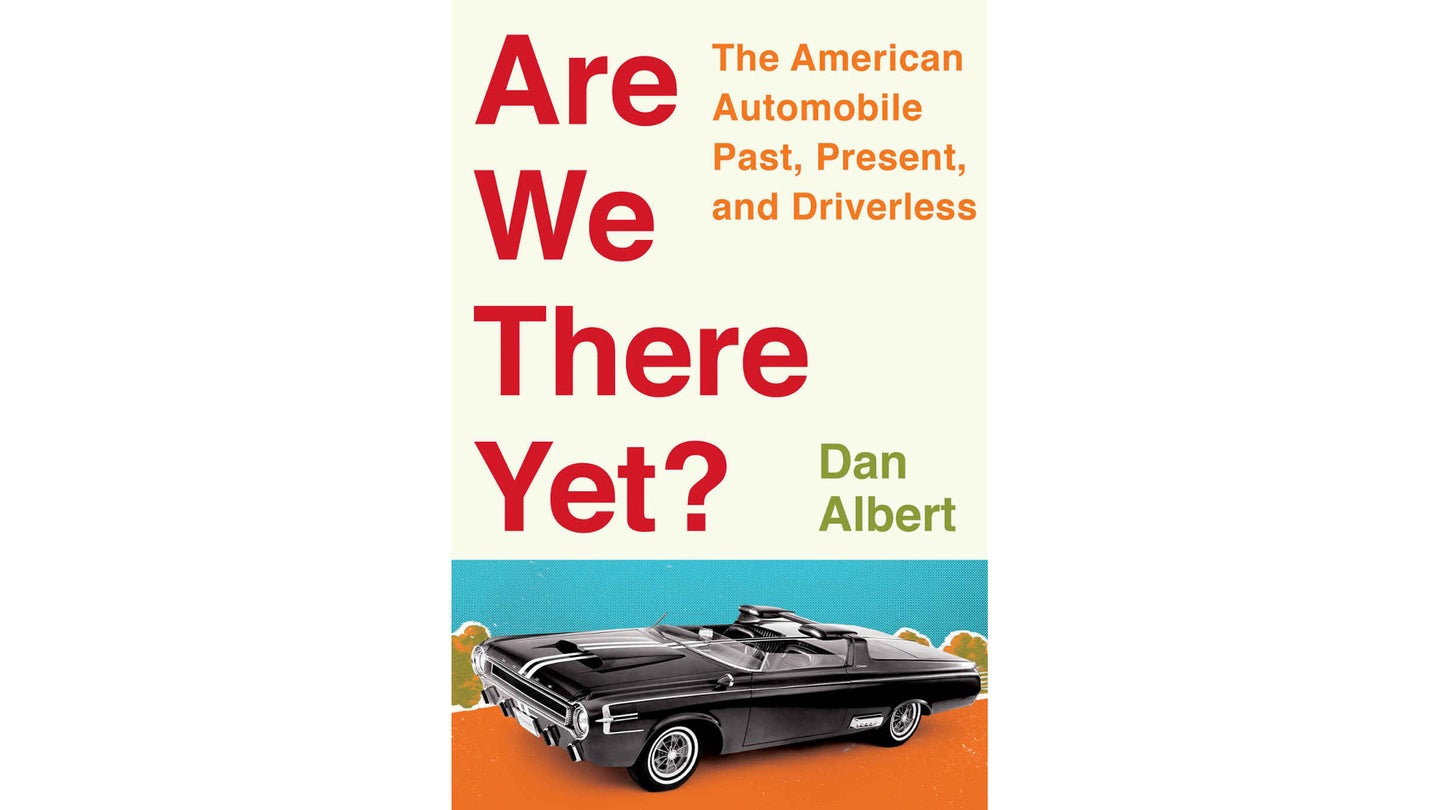 Editor's note: on this week's Merge Now podcast, the author of Are We There Yet? joins The Drive's Ed Niedermeyer to discuss the history, themes and lessons of his excellent new book. Merge Now can be streamed using the player above, or through iTunes, Google Play, Spotify, and all major podcast platforms.

Over the past 100 years America's "love affair with the car" has followed a familiar trajectory, from intense, carefree attraction through periods of painful but necessary compromise and settling into the placid, pragmatic coexistence of the past several decades. Then, suddenly, the symptoms of mid-life crisis hit and a flood of new ideas, hopes and expectations now haunt the second century of our enduring union with the car.

But as certain as we are that the car will (or must) fundamentally change, or perhaps even be replaced entirely by some other mobility paradigm, we're still hazy on how, when and even why this change will happen. Our mobility needs have been so completely cared for by cars for so long we're no longer used to thinking critically on the subject, and when we try we struggle to shake off the mental models that cars have stamped into our brains.

The best way to shake off our blinders and make the most of this historic opportunity is to understand the historic opportunity that got us here and why we didn't end up in some other alternate future. Luckily we have such a guide, a relationship counselor if you will, to walk us through the half-forgotten emotions and decisions that have so completely entangled us with the automobile. His name is Dan Albert, and his book is called Are We There Yet? The American Automobile, Past, Present, and Driverless.

Albert has the two most important qualifications needed to guide us through a re-examination of our relationship with the automobile. First, he is an automotive historian of the highest caliber. The depth of his research and the breadth of the sources he pulls from is what you would expect from a PhD in history, yet he avoids the pedantry of so much academic history in favor of an approachable, high-level perspective. Weaving together data points and anecdotes from over a century of material while covering aspects of the automobile as diverse as engine cooling and urban renewal takes extraordinary craft, and Are We There Yet? pulls it off in style.

But the second qualification is what really sets Albert's book apart: at a time when the complexities of cars and their future regularly fall victim to the moral and ideological absolutism (along with seemingly every other damn topic), Are We There Yet? brings an authentically conflicted perspective to the issue. Though Albert unflinchingly documents the high costs in death, pollution and racist "urban renewal" programs that cars have incurred, he is also an unapologetic "car guy" (in the gender-neutral sense). Deconstructing automotive mythology one minute and waxing nostalgic about his relationship with an aging Saab, he strikes a balance that is both rare and necessary in automotive writing.

After all, our "love affair" with the automobile hasn't ever been quite as simple as the phrase lets on. Cars have lifted millions into middle class jobs and lifestyles, while taking a terrible toll on our cities and planet. Driving is the most dangerous thing most people do regularly, but it's also one of the most deeply satisfying activities most of us do regularly (at least in part because of that danger). We vacillate wildly between Carter-era frugal pragmatism one decade and unapologetic SUV excess the next. Capturing the complexities of this often-contradictory relationship requires clear-eyed insight without straying into tiresome moralizing, and Albert hits this balance with aplomb.

Nor are these deep contradictions going anywhere. We like to think of electric shared mobility as being a new thing, yet Albert demonstrates that a syndicate called the Electric Vehicle Company was offering precisely that before the turn of the 20th Century. Now, autonomous cars promise unparalleled levels of safety, yet automated driving systems like Tesla's Autopilot are finding fresh new ways to kill people on the road. And though autonomy promises to deliver us from the the drudgery of traffic, the end of driving will mean we're also going to lose a rite of passage into adulthood and an opportunity to exercise our autonomy and develop skills and responsibilities that contribute to who we are as people.

Reflecting on the experience of teaching his daughter how to drive, Albert captures the unique contradictions of our future relationship with cars and mobility with pithy poignancy.

"I want her to be in command, to be the one who tells the passive passengers to buckle up and collect the gas money; to say, I know a short cut. And I want driving—the pure experience itself—to rescue her from a life of passive touchscreen consumption. Someday, perhaps, I will apologize to my children, or my grandchildren. I should have done more to protect you, I will say, from the predatory corporations and complicit government that stuffed them into the back seat and screened out the world. For worse, but also for better and of their own accord, generations of Americans have embraced automobility and celebrated ours as an automotive nation. We've been irresponsible and gluttonous to be sure. But we have turned toward ever safer, more efficient and more luxurious models year after year. That turning has put our kids on the road to the safest, most efficient, and luxurious cars of all: the car they'll neither drive nor own."

Embracing this complexity in an issue that too often pits anti-change reactionaries against blind technophilia isn't easy, but it's a critical exercise in the face of the profound changes ahead. I know this, because it's how I tried to approach the subject of Tesla in my upcoming book, avoiding as much as possible the polarization of that topic (of which I am undeniably part) in order to understand what its story says about how the collision between the automobile business and the high-tech sector will play out. For all the vitriol that Tesla, or human driving, or cars themselves can attract, the greatest risk to our future lies in the possibility that the important lessons these subjects hold will be lost to the shouting.

Had I imagined the kind of background knowledge and philosophical gestalt that I wanted readers to bring to my book, it would have been more or less the contents of Are We There Yet? That Albert's book came out just two months before mine strikes me as a stroke of remarkable luck. My publisher may not be thrilled by this, but if you can only buy one book about the future of mobility make it his and not mine. It's more directly about us as humans rather than the business of making and selling cars, and as such it gets more directly to the heart of what's important here: the future will only be as good or bad as we are able to make it, and more than likely it will be an infuriatingly complex mix of both. But no matter what the future holds, you'll be better prepared to understand, engage with and even shape it after you read Are We There Yet? than you were before.