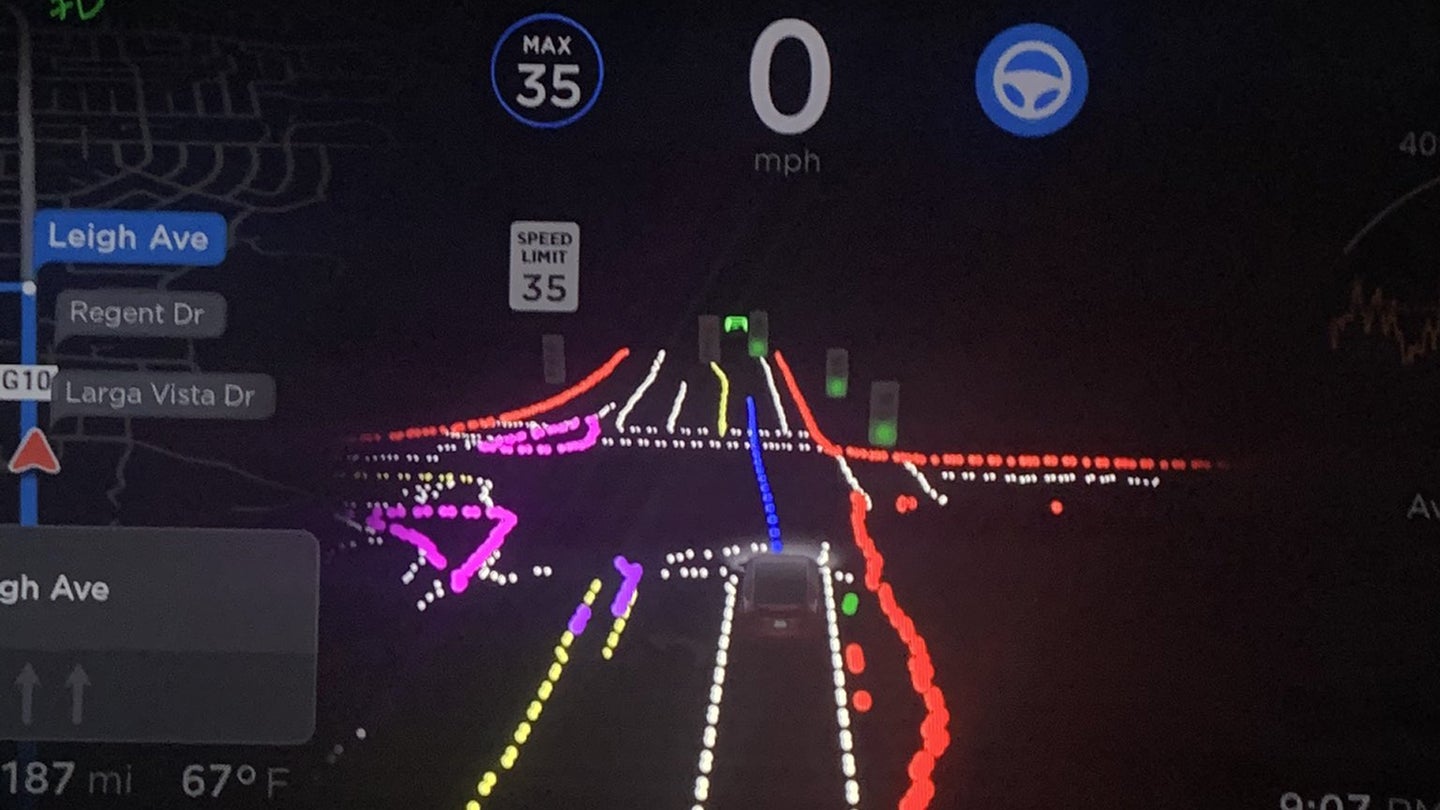 Tesla's long-awaited Full Self Driving (FSD) beta rollout is here and is currently being pushed to a limited number of Tesla owners across the United States. Drivers with access have begun posting photos and videos of the feature online, and while it appears to perform quite well, Tesla and the NHTSA warn that it isn't quite time for drivers to sit back and ignore the road.

The new update, which is formally called "Autosteer for city streets" (not Full Self-Driving as the feature may allude), allows early-access drivers the ability to toggle on the feature and allow the vehicle to perform in-depth maneuvers under their supervision. This includes following a driver-defined navigation route by making turns, stopping at traffic control devices such as lights, signs, etc., and automatically navigating around vehicles and objects.

One particular owner posted a screenshot of the software update release notes which warns users that the software "may do the wrong thing at the worst time" and urges drivers not to become complacent by not paying attention to the road.

However, since Model S and X have no visual Driver Monitoring System (DMS) built into the vehicle, and the camera for the Model 3 is not used, Tesla has no way of determining if the driver is paying attention to the road other than perhaps torque on the steering wheel—which has been proven to not be the most reliable method of determining driver awareness. The NTSB has even called Tesla's efforts in the DMS space ineffective and "a poor surrogate measure of driver engagement".

Musk has previously noted that he has been using a "bleeding edge alpha build" in his personal Model S for quite some time, meaning that the feature has been tested on public roads for a while now. Although this is exciting for Tesla owners, other drivers and regulatory agencies might not feel the same way.

"[The] NHTSA has been briefed on Tesla’s new feature, which represents an expansion of its existing driver assistance system," wrote the NHTSA in an email to The Drive. "The agency will monitor the new technology closely and will not hesitate to take action to protect public against unreasonable risks to safety."

The regulatory body stresses that no vehicle sold today is capable of fully automated driving as defined under SAE J3016, and that this feature rollout is still considered to be Level 2 in nature. The driver must remain attentive at all times and be able to take control of the vehicle at any time. Should a driver become complacent and abuse the feature by not watching the road, the NHTSA says that it is constituted as distracted driving at a minimum and reminds those with access to the beta that every state in the U.S. holds the driver—not the vehicle manufacturer—responsible for the safe operation of the vehicle.

Drivers who have access to the beta have spent the evening driving their vehicles around in the dark and showing off the feature to followers on Twitter and YouTube. The new visualizations shown by the vehicle are a slimmed-down depiction of the surroundings recognized by Tesla's cameras, including other vehicles, hard boundaries, lane markings, and traffic lights. A predicted route is also displayed on-screen to show how and where the vehicle will move next.

I have to admit, what I've seen so far is fairly impressive. The ability for the car to perform complex driving maneuvers reliably has yet to be proven, however, the reports from those with access have reported minimal necessary interventions. Tesla's in-car visuals also help to inspire confidence in how the vehicle will behave. Furthermore, it goes to show why Musk has so much faith in the company's vision-based system. In fact, the CEO said during yesterday's quarterly earnings call that Tesla likely wouldn't include LiDAR in its cars even if it were free.

Now that the hype train has left the station, Tesla is looking to capitalize even further on a feature that its CEO says will be an appreciating asset. Musk announced on Twitter that the Full Self-Driving option will increase in price to $10,000 on Monday, meaning that drivers who have yet to purchase it (and still desire to after seeing the positive experiences posted online) will soon need to pony up the price of a used car to future-proof their vehicles against Tesla's evolving feature set. No word on the upcoming pricing or availability of the supposed subscription-based pricing model.

The next few months will be interesting to watch as drivers post their experiences with the beta online. Tesla has historically been both praised and criticized for its use and marketing of its ADAS capabilities, and it's not likely that the war on both sides will let up anytime soon. That being said, it's worth exploring the possibility that the system could be abused by some drivers as the feature is more widely deployed—but let's hope not. Nevertheless, at least it's a step in the right direction towards Tesla's goal of one million road-going robotaxis.