But isn’t snapping their necks half the fun? 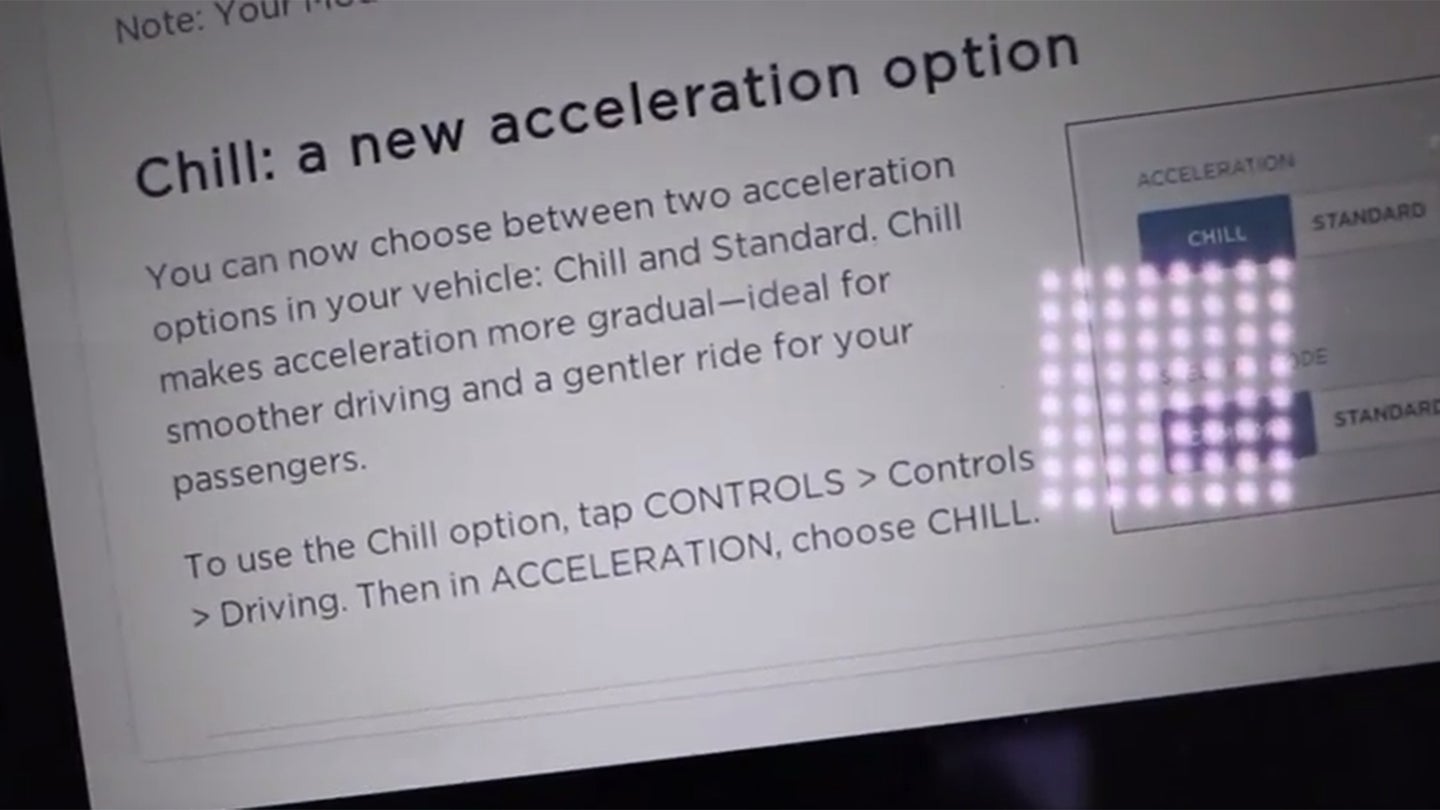 For all the hubbub surrounding Tesla's future product plans and economic viability, no one denies that their cars are seriously quick off the line. With its famed Ludicrous Mode activated (not to mention Ludicrous+), the Tesla Model S P100D gets from 0 to 60 mph in an eye-watering 2.4 seconds. Fun for the driver—not always fun for the passengers. With that in mind, Tesla's rolled out a new feature in its latest software update to please the nervous and carsick everywhere. Welcome to "Chill Mode."

As Electrek reports, the 2017.44 update release notes describe Chill Mode as "[making] acceleration more gradual—ideal for smoother driving and a gentler ride for your passengers." If you can't stop marveling at all that instant torque and your family is getting sick of it, this new update could be just the ticket to remove the temptation and proactively prevent the little ones from vomiting in the back seat.

The information from Tesla is a little light on details, and independent tests have shown they often underrate their cars anyway, so the DragTimes YouTube channel grabbed a Tesla Model S 100D to check out the update for themselves (skip ahead to 7:35 for the actual tests). The company's official numbers say it should accelerate from 0-60 in 4.1 seconds, but DragTimes discovered the real-world time is 3.7 seconds, about 11 percent quicker.

However, with the new Chill mode activated, the Model S 100D gets to 60 mph in a glacial 7.2 seconds. For reference, that's slower than the 2017 Chevrolet Suburban. The difference off the line is especially noticeable, with the torque severely dampened. DragTimes seems disinclined to chill, calling it "ridiculously slow" and asking "What is even the point?"

We understand the utility of a feature like this, but at the same time, 7.2 seconds? We have a feeling Musk and Co. will tweak this latest acceleration mode and make it a hair quicker, but getting it to, say, 5 seconds would kind of defeat the point. It may be a far cry from the neck-snapping performance that Tesla has become known for, but your passengers will thank you.

A Dutch Team Is Developing a Tesla Shooting Brake

The long-roofed Model S will be unveiled in March and sold in extremely limited numbers.

Some Tesla owners will be surprised to see new life to their cars, thanks to a software upgrade.