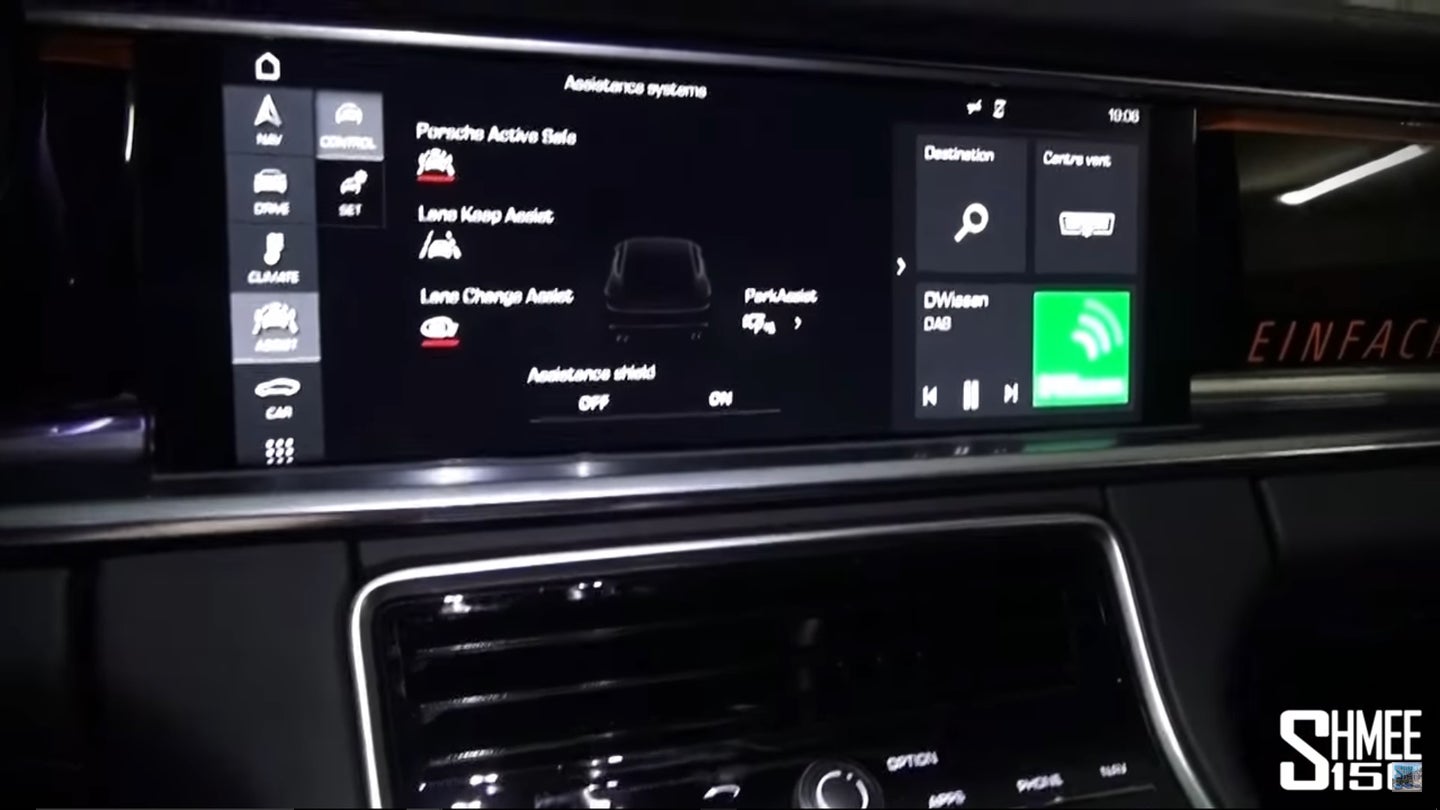 We're not normally ones to pay much attention to YouTube's car 'vlogging' community, but occasionally they produce something that is very much worth watching. Porsche has packed a ton of technology in the new Panamera, inclusive of a quartet of huge new high-definition screens. YouTuber "Shmee150" has access to a Panamera Diesel in Europe for a few days and has treated us to a look at the interior tech of that car. The car has a German tuning company's performance tune that is app-controllable, which is also interesting, but we're only going to talk about the factory-added screens rather than the iPhone app.

If you've driven any of the new Audis with the "virtual cockpit" system, you'll be mostly familiar with what is available in the big Porsche sedan. There are two screens flanking the centrally mounted tachometer, there is a new giant center infotainment screen, and there is a fourth screen mounted in the rear console to allow your rear seat passengers access to the controls. Below the center screen, surrounding the gear lever is a full bevvy of touch-control buttons.

The dashboard screens are nice, and easy to control via the steering wheel mounted buttons and scroll wheels. The center screen is very large and features a great touch sensitive feedback, much better than in older cars. This is effectively a smart-tablet mounted in the dash that can recognize pinch and swipe motions to control nearly everything in the car. This is a very cool system that looks as good as it feels.

So, where's the rub? Well, as Shmee mentioned in his video, the touch buttons on the center console are a bit fiddly and are less intuitive to feel your way around while you're driving. You could very easily push an HVAC button that you didn't intend to, or press the wrong one altogether. We're particularly wary of accidentally pressing a suspension mode button mid-corner when you really shouldn't, or accidentally turn off the traction control inadvertently. The other thing to make note of is the center vents controlled by the touch screen. Why is this necessary? Was it so hard to have a manually controlled air vent? It's a neat gimmick, but the fact that you can't change the way the vents are pointed without sorting through some menus makes us a little wary.

What is your take on the Panamera after watching this video? Is the interior tech super cool, or overwrought and gimmicky? Sound off in the comments below.

Porsche’s Cars Are Getting More Mobile-Friendly With “Porsche Connect”