Porsche’s Cars Are Getting More Mobile-Friendly With “Porsche Connect” 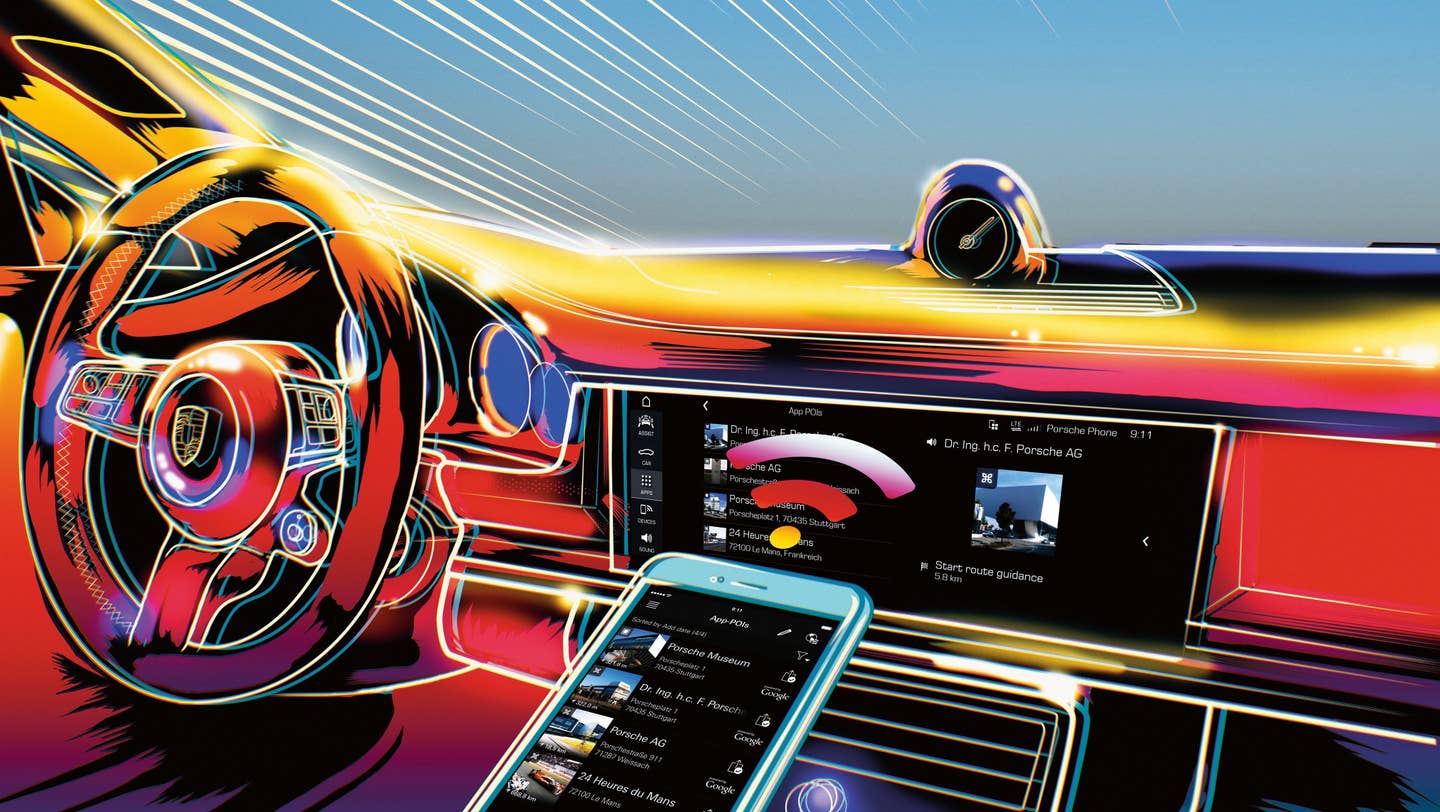 Since the center stack screen was introduced to Porsche models in the 996s tenure, it's always been just a little bit awful, and a little bit behind the times. Porsche was a latecomer to touchscreens, they were late adopters of USB integration, and their Bluetooth connectivity was poor until just recently. We had a press car 981 Boxster GTS last year, and the integrated navigation system in that car was abysmal. The great thing about being awful for years is that you can really surprise people when you leapfrog the tech in pretty much every other car. Porsche has done just that with the new Panamera's "Innovative Command Center", fully jumping into the 21st century.

Porsche's new connected phone applications allow you to keep track of your car's on-track performance with lap times and driving analysis, stream music, use voice commands, remote control of some vehicle functions (including folding the exterior mirrors, check statuses of the vehicle's operating systems, and in some cars activate the HVAC), and vehicle localization in case of theft, among others. Some models have a specific mobile phone tray which optimizes the phone's signal by relaying it through the car's exterior antenna. If your Porsche is equipped with "Connect Plus", you also receive an LTE telephone module, Wi-Fi hotspot, and myriad nav and infotainment services. If you happen to live in China or Japan, Porsche includes a concierge service with this option, allowing you to contact a representative to get you a dinner reservation for the night.

With Porsche's PCM Connect app, you can even search for destinations before you begin your trip with Google, save them to your car, and have the destination pre-programmed before you even start the car. If you have a Google calendar event saved with an address, you can pull that up on the PCM as an available destination as well. Perhaps my favorite part of the app, if you have taken a photograph with your smartphone, you can set the location the photograph was snapped as your destination with the car's nav. That seems pretty neat.

The recently launched Panamera features a massive 12" touchscreen in the dash that, in conjunction with a large LCD display in front of the driver, Porsche is calling "Command Center". We've been told in no uncertain terms that this will be the way forward with all new Porsche models in coming years. Much the way the Panamera led the way with the "waterfall"-style center stack that trickled down into the sports cars, this new design will disseminate similarly. The two screens will be able to feature Google Earth, Google Street View, and various Apple Car Play displays, essentially allowing your iPhone apps to be displayed and operated through the Command Center screens. Porsche is quick to point out that they have designed all of their car-connect apps to integrate fully with Android or Apple smartphones, and if your iPhone connects to an Apple Watch, you can also access those app functions right there on your wrist. It's a neat gimmick, but is it really necessary? Probably not. Porsche says, "In these and so many other ways, driving pleasure in a Porsche has just become even smarter." We don't know about all that, we just wanted an excuse to use their cool illustrations in this article.

How Will Motorcycles Fit Into Our Autonomous, Connected Future?

Two wheels may be the last bastion of unconnected motoring—but not for long.