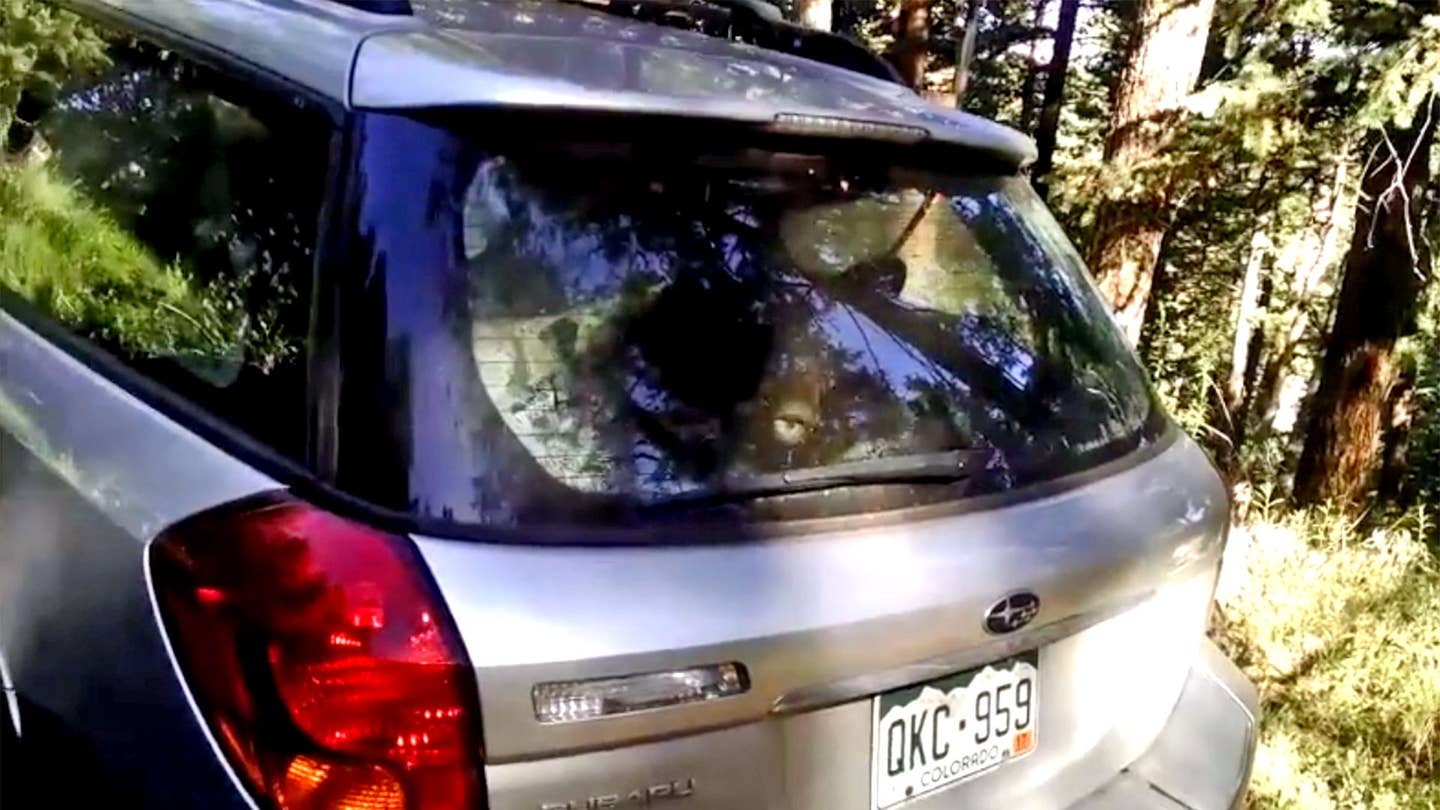 In what could be the most stereotypically Colorado occurrence possible, deputies in the Centennial State recently found themselves trying to free a bear trapped in a locked Subaru in the middle of the woods. And oddly enough, no one seems to know how the bear wound up in the car.

While the bear's entrance into the Subaru remains a mystery, its exit was captured on video by the Jefferson County Sheriff's Office, which responded to the incident. In the video, officers approach the Subaru Outback, which, in perfect Colorado fashion, is parked next to an older Outback. One of the officers can be heard asking, "How did he get in? I don't see a broken window." As the deputies investigate, the bear can be seen moving around inside the wagon; at one point, the animal even brings its face to the rear glass, presumably so it could check out the humans peeping in from the outside. It is, admittedly, an extremely cute bear.

The incident finally concludes with the deputy opening the Outback's rear hatch, allowing the bear to leap out of the Subaru and dash into the forest from whence it came.

17-year-old Annie Bruecker has only owned the Outback for a few months and uses it to commute to her summer job, she told ABC 7 KMGH. She stated that the car had been left unlocked. (We're guessing she'll never make that mistake again.)

“My mom screamed from downstairs and I thought that I was in trouble,” Bruecker told the news station. “She said, ‘Annie, there’s a bear in your car.’ ” And indeed, her mom was correct.

From the video, it is a bit hard to tell how severely the bear damaged the car, but it seems the big mammal may have torn up the interior a fair bit. At the very least, the damage was enough to prevent Bruecker from dealing with her day-to-day tasks. "He’s tossing stuff in the back basically and then you can see the ceilings of my car just ripped and I was like, I’m not going to work today,” Bruecker told Fox 31 KDVR.

The responding deputies were dumbfounded as to how the bear could have possibly found its way inside the Subaru. "No windows were broken. The door handles weren’t the kind you lift up. And yet somehow this medium-sized bear managed to open a door, crawl inside and close the door behind him. Deputies could tell by all the moisture on the windows that he’d clearly been inside for a while," the sheriff's office said in a Facebook post.