When you love a car, you find a way to make things work. 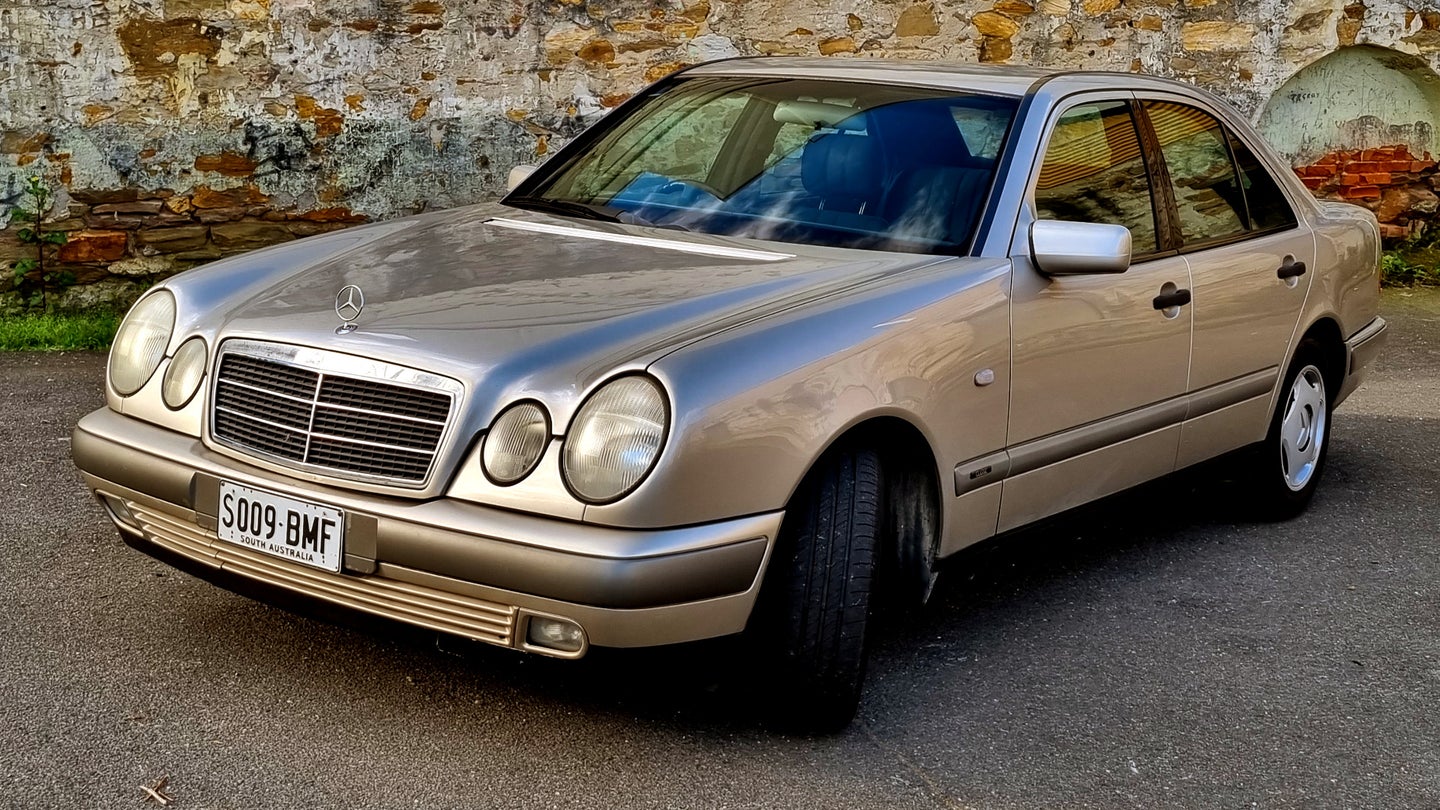 Last year, I went in to bat for a spurious cause. I publically asserted that there were indeed old German cars worth buying—the regular models rather than the fussy flagships. My proselytizing was inspired by the purchase of a 1998 Mercedes E240 (Mercy to her friends) and our love blossomed as quickly as the world turned to shit. But the honeymoon period passed and thus came my reckoning: after just a few months, I was met with a series of beeps and protestations from my handsome German saloon. But rather than sell it and shop for a new whip, I decided to take the repair route. A challenge was upon me, after all.

My original thesis, if you'll kindly remember, was that avoiding the thirsty V12s and many-cammed V8s was key to enjoyable, worry-free motoring with the older cohort of German vehicles. Yet, here I sat in a humble, 2.4-liter, V6 sedan with a multitude of warnings on the dashboard. The detractors were cheering from the stands, hooting that I had been wrong all along. Oh, how they hooted!

Not all warning lights are the end of the world, however. I was aware that my troubles were relatively tame, and there was certainly nothing that would keep my car off the road. Over a period of a few months, where I could find the time in a tight writing schedule, I slowly diagnosed and researched my way through the thicket of problems I was having and managed to fix each in turn. To say I'm chuffed would be an understatement.

The most annoying problem was the regular warnings of "LAMP DEFECTIVE." They would initially only come on randomly, usually when touching the brake pedal. Eventually, they became a regular warning on every startup. Initial inspections seemed to show all lights functioning, so I was scratching my head for quite some time. Ultimately, though, I realized that while I had working taillights, my brake lights were only functioning on one side.

The problem developed further when I began to get a pair of messages that were more concerning. They seemed to be related; hitting the brakes would sometimes cause the car to throw an error on the "Brake Assist System" (BAS) and the "Acceleration Slip Regulation" system (ASR or traction control). This, too, started as a rare occurrence before becoming a continual problem on every drive.

The fix ended up being tougher than I thought. The BAS and ASR failure was a common one according to forums, usually due to a worn-out brake switch that tells the car's electronics when you're pressing on the pedal. This affects cruise control, brake assist, and traction control operation, as well as the brake lights, so it seemed that if this was faulty, it would explain all my problems.

To test my hypothesis, I removed the switch and gave it several strong blasts of contact cleaner while mashing it vigorously to try and clean the contacts inside. I then refitted it and went for a short test drive. I still scored a "LAMP DEFECTIVE" warning, but the BAS and ASR errors were cleared! Well, they were for about 10 minutes before returning. This was enough to tell me that the brake switch was indeed the culprit, so I went ahead and ordered a new one for just $56.95 of our Australian dollarydoos (or about $41 USD).

I won't lie, I was quite excited to fit the part and solve the problem. A nice Mercedes really doesn't feel like a nice Mercedes if it's throwing warnings all the time, after all. I popped the part in and switched the car on. Joyously, I had cruise control back, and the BAS and ASR warnings were gone for good! It was a sign I was moving in the right direction.

Sadly, my theory that the brake switch was responsible for the lamp warnings proved false. Even after swapping it out and replacing all the tail lamps, I still had a bad brake light on one side, a dead center stop lamp, and still had the annoying "LAMP DEFECTIVE" warning popping up on the dash. I had to dig deeper.

As it turns out, the W210-series Mercedes E-Class uses a rear light setup I hadn't seen before. The bulbs for the rear lights sit in little round plastic carriers. These bulb carriers twist into slots on the tail light housing itself, featuring contacts that carry current from flat conductors on the tail light housing to the bulb itself. It's a frustrating design. Where you'd normally have a bulb sitting directly in a socket, you instead have an extra set of contacts, meaning there are twice as many wear points.

In my case, the contact between the bulb carrier and tail light housing had become worn over time from vibration, light corrosion, and repeated insertions. The increased resistance of this connection led to excessive heating, which began to melt the plastic underneath the contacts. As the plastic melted, the contacts on the housing were no longer supported from underneath and wouldn't make contact with the contacts in the bulb carrier. This led to the regular screams of "LAMP DEFECTIVE" from the dashboard.

Thus, I had to pull the whole tail light out of the car, which was thankfully not too difficult. With the housing on my desk, I could then shave away the blobs of melted plastic that were making it difficult to screw in the bulb carrier. I then set about building up support for the taillight housing contacts so they would sit at the right height, making up for the plastic that had melted away.

With some careful application of superglue and some random bits of plastic I cut up, I got things sorted out. I then cleaned the contacts on the bulb carrier and tail light housing so my brake lights would shine bright and the problem wouldn't happen again.

The problems didn't end there, however. The center high-mounted stop lamp housing had a problem, too. In much the same way, a clip-in bulb carrier that connected via an intermediate set of contacts was used, one of which had broken. In this case, some bending and soldering enabled it to make contact again, clearing the issue.

After everything was reassembled in the car, I was utterly pleased to drive around without the insistent BEEP from the dash when I hit the brake pedal. My taillights and brake lights were now fully functional; no longer defective, but effective, if you will. Are those opposites? Dictionary hounds will know.

The last major issue I have had to deal with is the randomly dying power windows. I'd found that every so often, I'd get in the car and one or more of the power windows simply wouldn't respond to the switches.

As it turns out, on the W210 platform, the power windows don't use simple switches to deliver power to the window motors. Instead, each power window has its own electronic controller that receives digital commands over the CAN bus, the electronic communication standard used in virtually all modern vehicles. Pressing one of the window switches sends a signal out over the CAN bus, which is picked up by the controller, which then handles moving the window up or down as required.

It's not uncommon for these modules to go bad with age. However, a dying battery is an alternative cause that's often cited when it comes to power window issues. The theory is that when the car is cranked over, a weaker battery will dip more significantly in its voltage, which can cause the power window controllers to malfunction and stop responding to input.

In my investigations, I'd noticed that popping out the power window fuses would sometimes coax the modules back into operation. However, based on the battery theory, I realized that if the problem was a dip in battery voltage while cranking, simply removing and reinstalling a fuse with the car off wouldn't help—the module would simply malfunction again when I started up the car again and the voltage dipped once more.

What I learned was that I could resurrect any of the windows at will by pulling a fuse and rebooting the modules while the car was running, so there would be no voltage dip to immediately crash them again. I would regularly pull up to a drive-thru, realize my windows weren't working, and then hop out and pull Fuse 16 under the hood so I could get the window down to make my order.

This has convinced me that the issue is battery-related. Checking the battery with a multimeter similarly showed it was occasionally dipping below 10 volts during cranking, suggesting a replacement is due. Notably, the problem hasn't occurred anywhere near as much in the warmer summer months, either, when batteries typically perform better due to the temperature.

I'm fairly confident now that a new battery will solve the power window issue once and for all. I haven't yet shelled out the $500 AUD ($360 USD) for a replacement for the nearly truck-sized battery Mercedes specced for this vehicle, but given how the existing starter battery is dipping under load, I should really get on to doing that sooner rather than later.

Having a Little Thing Called Perseverance

It's nice knowing that perseverance has paid off, and I'm back to enjoying my Mercedes as it should be experienced—free of irritating warning lights, beeps, and frustration. As a bonus, nothing new has really gone wrong, and all the hot, spinning parts have kept performing as they should. I've run an old German car for almost a year now, and I've gotten out with my wallet intact. Other than the diff swap I did when I first got the car, I've only spent a couple of hundred dollars on bits and pieces and an oil change. It's even got Bluetooth now, thanks to some natty mods I pulled on the factory sound system. That feels like a win.

I'm really digging my comfortable German daily, and most of all, I'm relishing owning a car that actually has a decent paint job on it for once. All it needs now is a metallic purple wrap and some dope gold rims. Well, we'll see...

So, There Are a Few Things Wrong With My Very Cheap Mercedes

It was supposed to be all smooth sailing. It never is.

In Defense of Buying a Very Cheap Mercedes

The brain says no, but the heart wonders if maybe—just maybe—we could be the one to get away with it.