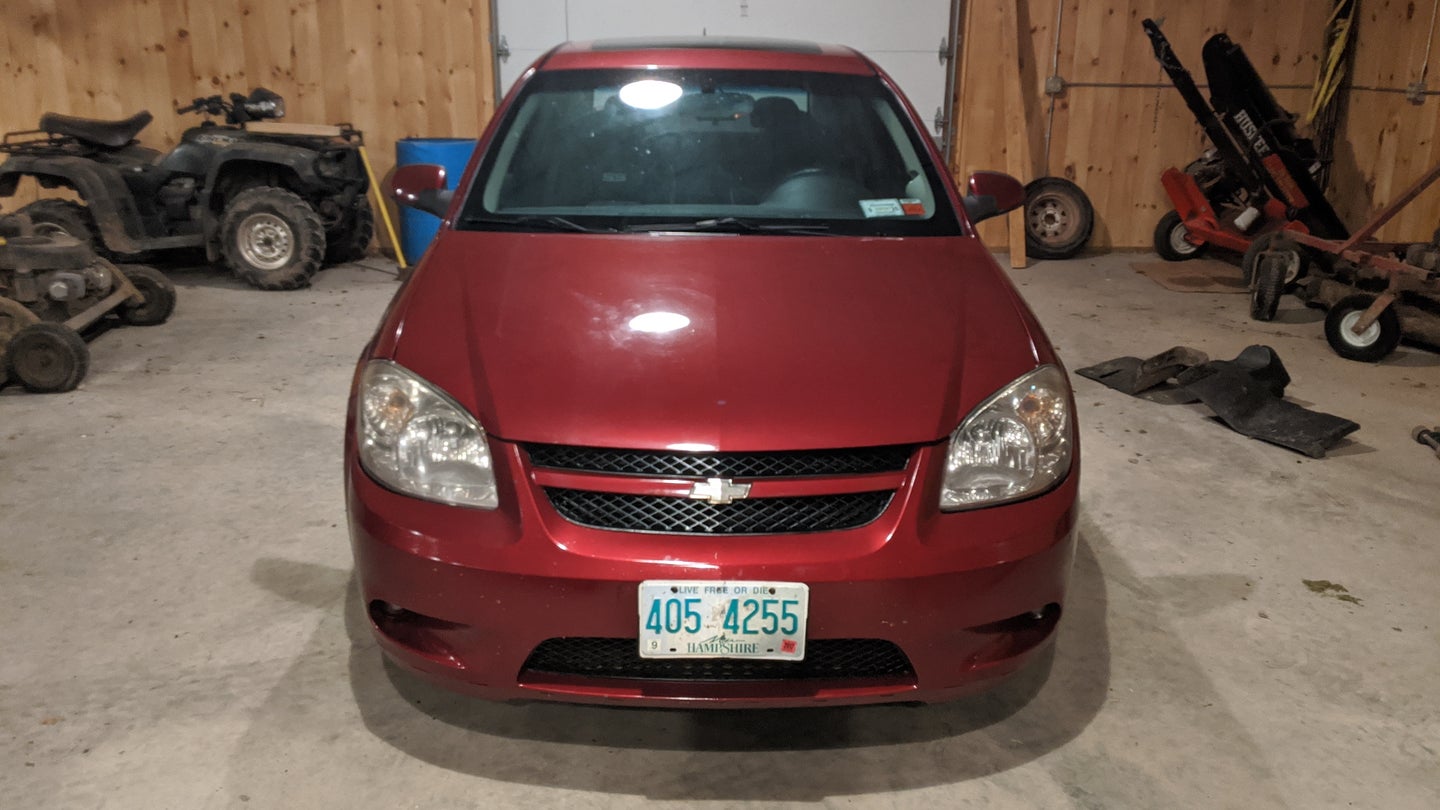 The rest of this article will be about the good parts of this car. That's right. Everything from this point down is good. And to be fair, I just got my Cobalt SS yesterday. But I've put enough miles on it to tell you that if you're in the market for a fast, practical, front-wheel-drive car, you might as well erase the Focus ST from your mind.

A quick recap, in case you have burned your memories of the Great Recession to make room for the fresh new horrors of 2020: the Ohio- and Mexico-built Cobalt was GM's Civic- and Corolla-fighting compact sedan made from 2004 to 2010. It was better than the Cavalier it replaced, probably, but also not as refined as the two generations of Cruze that came after it. Today, it's often a sad sight on North American roads: battered, bruised, rusted and typically on its third or fourth owner, a cheap and disposable Craigslist car that's little more than basic transportation.

Until you get to the SS models, that is. Rather unusually, the Cobalt SS was at one time or another available with three different engines covering every method of aspiration. There was a supercharged car, a naturally aspirated car, and then there's one I bought, the turbocharged car. Its 2.0-liter four—also available in several other GM performance cars—is good for 260 HP and 260 lb-ft of torque, which made it the top of the heap as far as Cobalts went. Solid numbers for a compact car in its day, and I'd argue, today as well.

But nobody remembers the Cobalt as a bastion of luxury. The interior is probably the first thing you're confused about. Let me be clear, I'm not so sure about the interior on the base cobalt, but the SS interior is, as I promised, good.

What I mean is, it's good in its context. This car was less than $5,000. When new, it was a hotted-up economy sedan from bailout-era General Motors. It has comfortable seats with some suede inserts, the steering wheel tilts, and is a nice size. The center stack has a USB port and an aux cable, something my albeit older yet surprisingly similar E46 BMW M3 lacks.

Sure, some of the plastics may seem cheap, but this was a very cheap car when it was sold. For some reason, people seem to forget that the Cobalt replaced the Cavalier. Have you ever been in a Cavalier? This car is on a different planet compared to that. And as far as creature comforts go, the only thing I'm missing is heated seats. And I can live with that.

Also, while you can debate me on the interior quality, what you cannot debate me on is this car's performance. Not just its objective performance—which I don't think could be much better for the money—but the subjective stuff. The steering really good. Period. It's corrupted by front-wheel-drive, sure, but it feels precise and also provides nearly as much feedback as the steering in my M3. I'm sure ill get flack for saying this, but the steering is better than an AP1 S2000s.

The ride is also, well, great. While I've grown to like my M3's sharp ride quality that lets me know whats going on in more-than-enough detail, the Cobalt has a similar ride quality to the ND Miata. It feels firm, sharp, but I'm almost never expecting the nightmare-worthy crashes that happen in my BMW. And that's on the stock forged 18-inch wheels that came with the Chevy. I was also expecting to notice some sort of unrefined jounciness from the back of the car on account of the decidedly dependent rear suspension, but it never comes. Somehow GM managed to make a Chevy Cobalt feel light on its feet and well-collected, even after 11 years and 130,000 miles.

And now, finally, we get to the engine. Why did we forget about the LNF turbo four? In second gear it pulls just as hard if not harder than a Focus ST hatch. It barely runs out of breath up at redline and while there is some turbo lag for sure, the power comes on strong and consistent. It's responsive, smooth, and if you don't believe my subjective analysis, look the 2.0-liter LNF on paper.

It has forged rods, a forged crank, oil squirters under the pistons, the head bolts go through practically the whole motor, and it's tunable for cheap like almost nothing else. A $350 tune for this car instantly nets me another 55 horsepower. Just a tune. I also don't have to worry about blowing shit up. The driveline is just as strong as the engine, and the only weak link—when you start approaching 400 lb-ft of torque—is the clutch. That's a pretty good weak link if you ask me.

Torque steer is also very minimal. Sure, you're aware the car is front-wheel-drive, but compared to the Focus ST, it's not tugging almost at all. If you floor it in an ST with your hands off the wheel, it will take you off the road. That is not the case in the Cobalt.

I keep referencing the Focus ST because my brother has one, and whenever I drive it I just can't make up my mind about it. I had the same feeling about a loaner 2019 330i I had several weeks ago. The fact of the matter is, the new 330i is a really great car. It's quiet, extremely refined, super comfortable, the transmission is a total peach, and the motor is very strong. But even with all of that, even on some good backroads, I could never figure that car out. It made me uncomfortable.

Sort of like when you're telling a joke and them somebody gets the biggest kick out of the part that wasn't the punchline. It's a little, I don't know—it's frustrating. You throw it into a corner, put your foot down, yank on the shifter and you keep waiting for the car to say "hello" back. It just never happens.

Sure the Focus has a heated steering wheel, great heated Recaros (which hug me a little too tight after the COVID lockdown), and a much nicer interior, but you really just cannot compare the two cars. The Cobalt is better in every subjective metric, and many objective ones as well. The brakes are better, it feels faster, the steering is above and beyond anything I've felt from the Focus ST, and I paid $4,700 for this car.

We'll see if the whole thing starts falling about just seconds after I take it for another drive, but so far it feels like it has a lot of the stuff I've been missing from new cars. And if GM can nail this kind of thing together in Ohio, why can't anybody else? In the meantime, ask me stuff about the newest addition to my garage.

Want to tell the author how he actually bought junk? Send me a note: peter@thedrive.com

It’s now back with its original family.