The Soul-Crushing Cost of Free 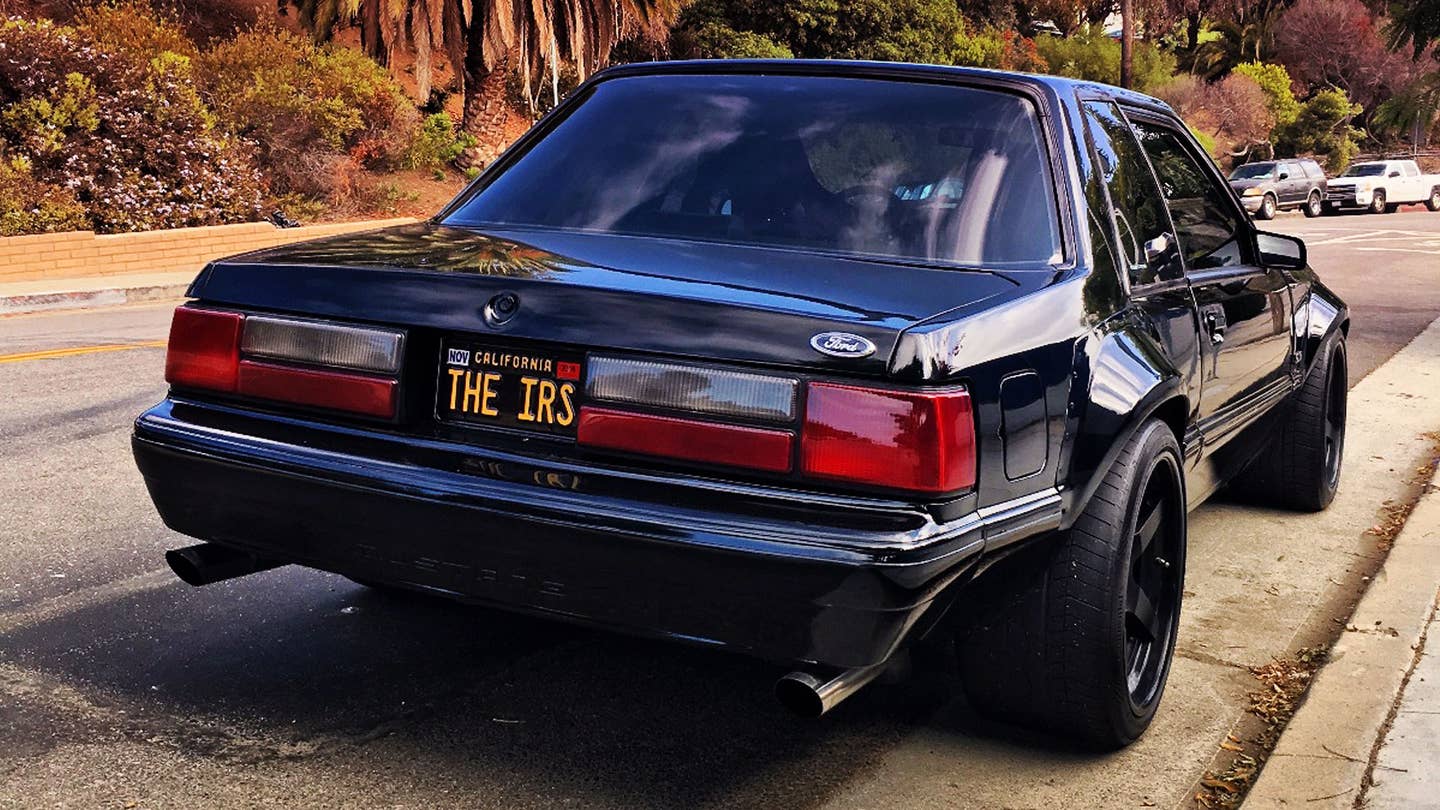 2016 was a downer of year for many. Each had their own reasons. For me, 2016 was a fine-line dance between some of my highest achievements, both professional and personal, and saddest moments. I found myself in the real world, not a car collector's fantasy land, forced to sell the majority of my own personal cars for very practical reasons. Also, an orange thing with Tourette’s in his tiny Tweeting thumbs got elected President, but I digress.

My beloved 1988 Ford Mustang project car—a car on which the sweat of many a talented engineer has dripped and many a talented wrench has turned—seems to be presenting itself as my own degree in masochism. It's an attempt to turn a car known for speed in a straight line into a well-rounded sports car, and it shouldn’t be that hard—even though the Five-Point-Slow nickname was well earned. This car, even with an engine making 50% more power than stock, probably runs quarter miles in the 13’s. Horsepower can be bought easy, and I wouldn’t be the first person to make a Mustang handle; racing shops all over the country have been doing that for decades. But something about this car never let me win. Something kept coming back to fuck up my life, to fuck up my schedule, and to fuck up my bank account. Last week, I found out what that something was. And I probably should have known better.

Your car is only as strong as its weakest part. The part you cheap out on; that’s the part that’s going to fail you. So far I’ve replaced lots of parts, both stock and aftermarket. One thing is certain: aftermarket parts fail at a rate significantly higher than any factory part. I’ve now installed brand new aftermarket exhausts, fuel tank, headers, gaskets, seals, and ignition coils, which have failed straight out of the box. My engine tuner (Steve at Powertrain Dynamics in Huntington Beach, you rock) says to always use the best available factory part before going with something aftermarket, but there are times I have no choice since my car is pretty far outside factory spec. But an out-of-the-box part failure costs me, at a minimum, one full day of my labor time, several hundred dollars, and more days or weeks not able to drive my car.

I knew after the initial build was finished that I would have to spend some time working the kinks out of the car. Development driving after a build, the art of “Drive it, Break it, Fix it, Repeat,” is what separates a true driver project—what I wanted—from a show queen, or project car hell. But I didn’t know that I’d be Ubering to Huntington Beach, again, on January 2nd, 2017, to pick up the car from what would hopefully be the last of its issues with a steering system that has plagued me for, so far, the car’s entire post-modification existence.

Unfortunately, one of the biggest problems with a full build is that, if you’ve changed all the parts at once, it's tough to figure out which part has failed you. In the steering system, the folks at Maximum Motorsports demanded I buy an original, non-rebuilt, “ZM” Code Steering Rack from a Mustang salvage center. This is the rack used in the 2003-4 “Terminator” Cobra, which offers the best valving and the best feel. It’s also a direct swap onto a Fox Body. Then we used Maximum Motorsports’ steering shaft, and a rebuilt, OEM steering column. This is the exact setup that Maximum uses in their American Iron race car, and I never gave a second thought to any of it. The stock steering wheel was a piece of shit; you could see it flexing literally inches in my hands when I took the stock car around Buttonwillow in the video it seems like I shot forever ago—so I wanted to do something about that during the “finishing” stage.

Most of you are not going to relate to this, but this is how my life goes, so bear with me: when I do a project car, people want to give me stuff. Not money, only parts. That’s how it works when you’re on TV and into cars. If I buy a car in its first year of production (like, say, a Ford Focus RS), I can order up any single part I want for it, for free, from just about anyone. Most tuning companies don’t have the margins to do any kind of real advertising, but they are able to throw parts towards early adopters with followings; Mountune, for instance, has installed quite the host of parts on my Focus for free in exchange for driving impressions, data logs, and the eyeballs of all quarter-million of those folks who watched that video. I have had the luxury of choosing partners along the way, with the Focus RS, the Fiesta ST before it, and this Mustang. But occasionally, I cut a corner. I take the easy way—and it bites me in the ass every time. And, in the pursuit of having a cool looking steering wheel on sale for Free-99, I took a second rate part. It’s a steering wheel—three spokes worth of metal wrapped in leather, what could go wrong?

It was on the second day I went to the canyons to make this video, I was driving home when I felt the inconsistency in the steering. A quick right-left-right section and the steering ratio, out of nowhere, felt different. Ten-seconds later it took more steering lock to make the exact same corner. My confidence in the car evaporated, and I took it back to BBI for investigation.

I should have started the conversation with the disclaimer: “I am a moron. You can trust me when I say the steering is weird, but when I try to theorize why, you should not listen to me at all.”

Instead, I said, “I think this scrapyard ‘ZM’ or whatever steering rack is fucked. The ratio is inconsistent from corner to corner, and I feel like I’m going to die.”

BBI, assuming I wasn’t a moron, sent the rack out to be rebuilt, and also discovered the rear wheel bearings had gone bad, replacing them as well. I drove the car home, then to the canyons, and the issue remained. The rack was fine. Back to Huntington.

BBI’s techs removed the column and shaft entirely, and sent the column out to be rebuilt as well. It came back ten days later, BBI reinstalled the parts, aligned it, and I took the car to the canyons and had a simply epic day of driving. It was perfect. It was nailed. Dialed in. I went home, delighted, parked the car, put it on the battery tender, and went on vacation to Africa for two weeks.

When I got home, I went for a drive. The very instance I reversed 90 degrees out of my garage and up the road, something was wrong. The steering wheel alignment was now almost 45 degrees off to the right. The car would track straight, but the steering wheel was off. It was perfectly fine when I had parked it, and now it’s off. How is this even happening?

Afraid the car’s steering would completely fail if I drove it, I used one of my yearly AAA Flatbed Tows to get the car back down to BBI, who tore into the column again, and found nothing at all wrong with it. Instead, while pushing the car around the shop with the ignition turned off, they found something else. With a hard shove (such as one might experience in tight, canyon hairpins), the steering wheel would spin on the column, even if the steering was completely locked with the engine off.

Having been discovered, completely by accident, the real problem presented itself clear as day: a freebie, itself the most basic part in the entire steering system, had failed right out of the box. The steering hub, a simple adapter which secures the wheel onto the column, didn’t have strong enough teeth. After just 700-or-so miles of driving, the thing had sheared off completely and would nearly freewheel on the column. This was a nice-looking but ultimately cheap, Chinese, no-name part that the manufacturer of the steering wheel does not stock, nor sell, and “sent to me from one of [their] suppliers simply out of convenience,” according to a statement by the CEO of the steering wheel company. I'm not naming them in this article because I do not believe the mishap occurred maliciously, and because they don't sell the part in question on their web site.

Nevertheless, accepting a freebie in this case cost me three unnecessary trips, several thousand dollars worth of unnecessary parts rebuilds and labor, and forty weeks, out of fifty two, in the year 2016, in which my car was not in drivable condition. As of today, January second, I drove the car home with a Momo Prototipo Wheel and Hub, which I paid for, and whose motorsport-backed quality I trust. It has much stronger teeth holding it on the column. Two-hundred-eleven dollars, including shipping. If I had spent that, rather than taking a freebee two years ago, who knows? I may have been driving this whole year.

Or the car may have been sidelined for something else—something equally stupid.

With any kind of luck, I’ll have a significant period of time in 2017 in which I can actually drive the Mustang. Fingers crossed, maybe even at a racetrack, like I had hoped. And if I’ve got anything resembling a resolution for this year, it’s easy: motorsport-grade parts or bust. And like I always say, if you’re going to modify your car, make sure those modifications actually make it better.