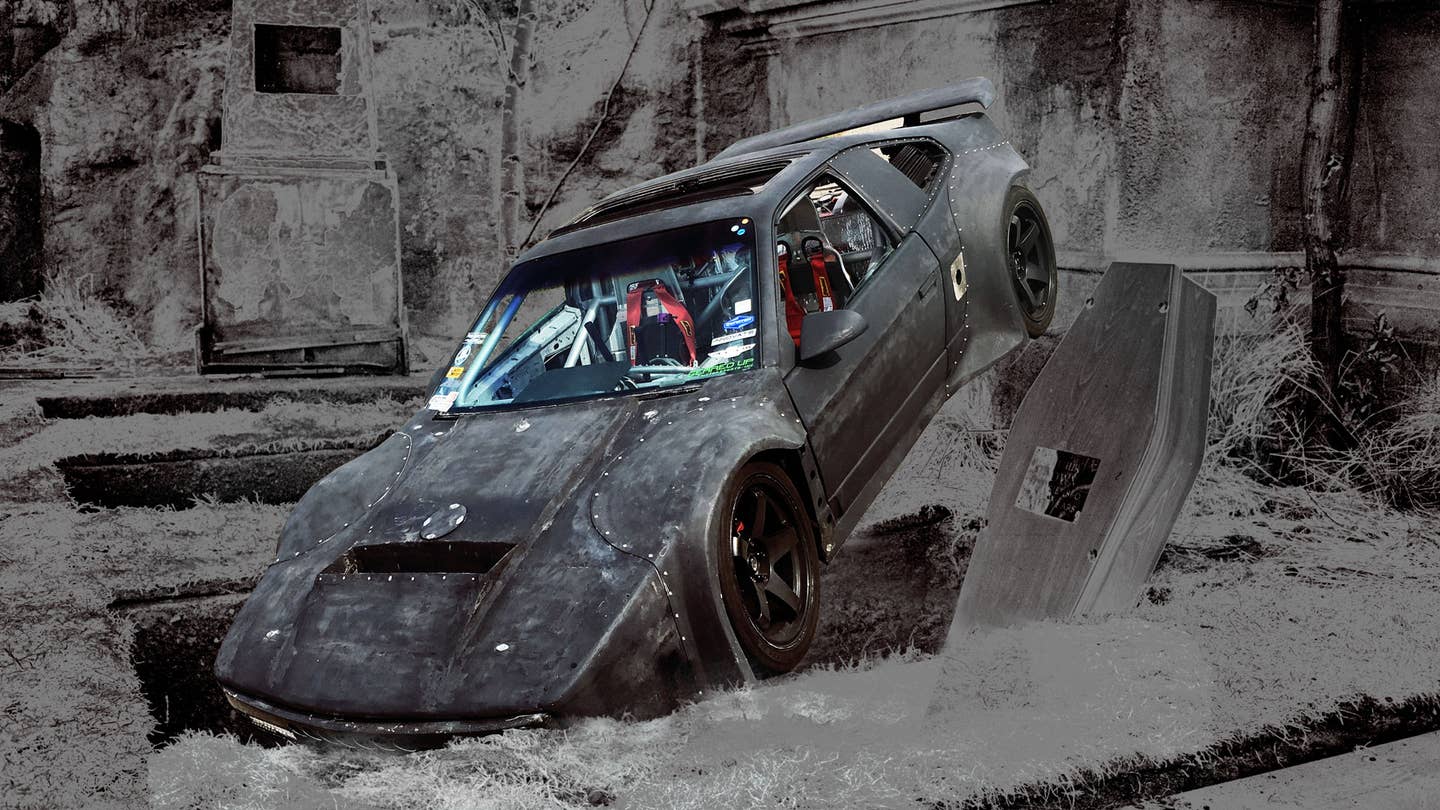 Obsession is a slippery slope, no matter your chosen road. Whether you're doing a triple back flip on a YZ250, hoarding a house full of newspapers you swear you’re going to read, jerking off to German equine-snuff films, or doubling-down on eleven on your way to bankruptcy, there’s always a more extreme high to be had. Horse porno guy didn’t start there; he probably started like the rest of us, stealing a Playboy from dad and looking at some boobs. But for the obsessed, it's always about finding that next level. Because obsession is numbing, and the next fix is the best fix. Twenty steps down the rabbit hole, and no matter your particular fixation, you’re in a crazy fucking place.

My obsession, in case you can’t figure out where this is going, is sports cars. With normal cars, even very fast ones, I don’t feel a thing. If I took my sister for just a single three-gear pull in a Mustang GT, she’d be in tears. Me? “Yeah, it’s got solid power.” I once drove a Hennessey Venom GT on a runway, hitting 200 mph from a standstill in a bit over fifteen seconds. Five days later I found myself behind the wheel of a 900-hp Camaro. “Pulls pretty good, man,” I said.

PULLS PRETTY GOOD? This Camaro would remove, by gravity, eighty percent of the fluids from the average person's body—and that's the best I can come up with?

Mike Nasiatka doesn’t call it that. He calls it the Pontibishi. As the car’s owner and builder, his name for it makes sense, because it’s an '86 Pontiac Fiero GT with a heavily modified Mitsubishi Eclipse Turbo drivetrain, and because combining words is fun. It started as two cars: the Fiero, and Mike’s old DSM drag car packing a fully built 4G63 engine fed by a 68mm Precision Turbo, making 700 hp at a peak 37 psi. After a crash took out the Eclipse, Mike shoved the entire drivetrain into the back of a junkyard mid-engined Pontiac. Obsession is a hell of a drug.

The name "Death Fiero" makes more sense. Because it looks like, sounds like, and does in fact want you dead. And because of my obsession—my personal heroin, my insane need—to drive the most bizarre shit imaginable, I took the Death Fiero on an open track day. In the advanced group. In front of a crowd of 4,000 people. On video.

The Gridlife Motorsports and Music Festival is held every year at Gingerman Raceway in South Haven, Michigan. It’s time-attack, HPDE, drifting, racing, a car show, and a music festival, all in one. Thousands of people—Midwest racers, tuners, stancers, and music fans—descend on Gingerman for a weekend of bohemian motorsport action. The place was packed, and I openly tried to talk myself out of driving the Death Fiero to anyone who would listen.

All I knew were the basics: the Fiero’s chassis was stripped and caged, with a handmade, rough-at-best fiberglass wide-body kit. It ran 275-section tires front and rear, with non-assisted brakes out of a C4 Corvette and Megan Racing coil overs designed for an Eclipse, but reversed front-to-back. The steering wheel was bare metal. The Kirkey seat was bare metal. The roof featured a large hole where a pop-up sunroof used to be. And it shot fire. Like, a lot of fire. I assumed that if I crashed, they’d find me in pieces.

The engine itself is a full-build unit, with a parts list that would take up more than half the words in this article. Forged everything, reinforced everything, loads of E85, and a metric fuckton of air in and out. Suffice to say, it’s stout enough to handle thirty-goddamn-seven pounds of boost. Running through a built, Quaife LSD-equipped gearbox and heavy duty axles, this engine was capable of pushing an old, front-drive Eclipse into the tens. In a 2,400-lb, 30-year old Pontiac, that’s a power-to-weight ratio of 3.42 pounds per horsepower. For reference, a Lamborghini Aventador is 5.53 lbs./hp. And this is a fucking Fiero we’re talking about.

On closer inspection, Mike’s fabrication skills became apparent. The roll cage had clean, tight welds. The subframes, complete one-off custom jobs, held the car at the right stance and kept the tires from rubbing the fenders. The driving position was excellent, and all the controls were laid out in a clean, logical fashion. The Death Fiero at least featured logical thought, if not a logical experience. Have I mentioned this car had turned a grand total of ten laps around a race track in its lifetime?

“My instructor loved it,” Mike said.

If he didn’t die, I supposed I wouldn’t, either. And after all the normal cars on Earth, I needed the next fix.

I agreed to drive it on one condition: Mike had to put it on low boost, which is only 500 horsepower.

The brake pedal is unassisted and heavy as hell. Although the Corvette brakes were originally designed to stop a car nearly eight hundred pounds heavier, I had to use extreme force to get the car hauled down from well over 100 mph on Gingerman’s back straight. Squeeze too hard, and the Death Fiero wants to swap ends. It steps out on turn-in, offering the option of a heroic drift or a terrifying tank-slapper into the Armco. Four times out of five I managed the oversteer, but at least once a lap I practically shit my pants—most notably on the exit of Turn 2, where the track goes over a crest right at the apex, making the already-light Fiero shake that ass like Shakira, who is angry and has a gun.

The steering feels light and tight, direct on the front wheels under braking. Loading up the front end makes the back slide around, so I reminded myself each lap to brake in a straight fucking line, and not to trail brake like in a normal car.

I had trouble keeping the thing in boost; it lags like a protesting child below 4,000 RPM, and at five grand it kicks so hard I didn’t even want to keep my foot down, delivering repeated rolling burnouts and obscene amounts of thrust once the Dunlop Direzza Star Spec tires hooked up. Keeping the turbo spooled for a whole lap would involve several downshifts to first gear, which, lets face it, if you’re not racing in Formula 1 or Solo Nationals, you’re not doing. So I prepared for the lag, trying to manage the snap-oversteer under braking by getting on throttle two seconds earlier than normal. On boost, the violence is incomprehensible. Noise, hellfire and damnation, dragster levels of G-force, and the fact that you’re gripping a studded, bare metal steering wheel all flood your brain with sensation—I might die in this car, but at least I didn’t bitch out.

The shifter linkage is a bit loose, and the “roller” style accelerator pedal, adopted from off-road trucks, doesn’t like heel-toe shifting, so I struggled to rev-match at the end of the back straight while hauling the car down and avoiding full lockup. I missed the blip, dropped the clutch, and the engine locked the rear wheels, sending me ass-first, inches from the Armco barrier on the front straight. Somehow, I managed to get things back in line, and decided the next lap would be my last, because one can only get so lucky so many times.

Understeer-understeer-OVERSTEER is how it went, every corner. An exercise in summoning, then reigning in boost, finding a balance, managing just enough power to keep the damn thing in line. Until the straightaway, when I needed the fix and couldn’t help but go flat.

One last pull. One last feeling of the tires breaking loose in the upper eighties as I grabbed for fourth gear down the back straight. And: BANG, the shifter fired back at me; I was sure I’d blown the gearbox. Or something. Death Fiero was not happy, but Matt was still alive. Clutch on the floor, it didn’t want to go into gear, but I was in the right place at the right time, and I coasted, fist out the window, into the pits.

"Thank God," I said aloud, as the shifter slid into second gear and I rolled through the paddock. I was dripping sweat from the adrenaline, and from a metal seat on a hot day. I could barely form anything resembling a coherent thought for my video. But at least one gear worked, so that was better than no gears working.

Climbing out of the car, one hand through the former sunroof and another on the cage, it quickly became obvious what happened: the intercooler pipe blew off under load. It just needed a tightening. Death Fiero wasn't dead, either. And I’d had a hell of a day.

The man who doesn’t feel cars anymore was panting, sweaty, and flustered. Done. I didn’t even want to go back out for the last drift session in my loaner BMW M2, even though I had at least enough 32nd’s to get me through seven or eight more slides and then back to O’Hare airport. I packed it in for the day.

The deep, dark rabbit hole of shed-built psycho machines got one step deeper that day. Everyday supercars and tuner cars got a little more boring, thanks to the Death Fiero. I don’t even know where to go after the experience, because even the fastest street car can’t provide the thrills-per-minute of a completely unproven, home-built, overpowered project car. From beginning to end, I thought I could absolutely die at any second in the Death Fiero.

I want to try high boost.