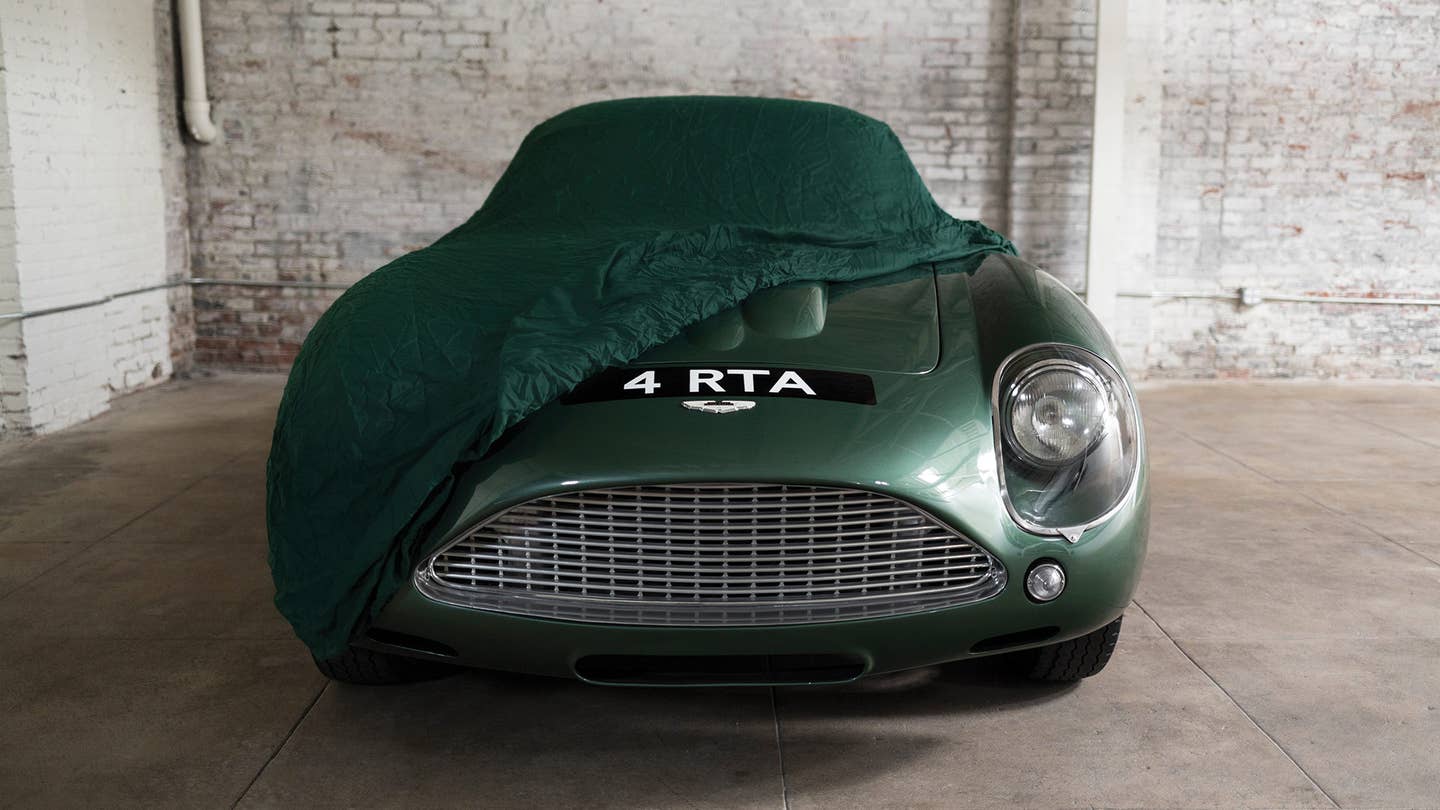 Every day through Dec. 23, the writers and editors of The Drive are bringing you the essential guide to the year in car culture. Divided across 10 core categories, The Drive 100 is a celebration and send-up of the year that was. Check back tomorrow for: Pointless but Awesome.

During an era when reliability was the ultimate luxury, Rolls-Royce trumped all. The early flagship engine was a honkin’ L-head six-cylinder with 50 horsepower, its components handcrafted from aluminum, phosphor bronze and nickel steel. Even by modern standards, it’s a masterpiece. No sound, no smoke. The crankshaft was ground to an accuracy of .025 on all bearing surfaces. On top of those flawless mechanicals, coachbuilders went to town. I’m convinced this 1914 Silver Ghost is as handsome as any ever. The boattail Skiff body is perfection, all mahogany and dark cherry, set off by the forest green paint and ebony wire wheels. The boa constrictor horn cinches it.—Max Prince, senior editor

I love vintage car auctions because they are arenas for unchecked enthusiasm, measured in dollars. Auctions are where folks buy objectively terrible cars because they make them feel the right feelings. Just this year, one wealthy person bought this 1978 Pontiac Trans Am for a staggering $170,000—a $140,000 premium over a comparable Trans Am, albeit one untouched by Smokey’s hands. A note: Burt Reynolds owned the car, a promotional vehicle that never appeared in Smokey and the Bandit, for under a year. That works out to about three grand of Burt Reynolds-added value per week. Burt: need to borrow a car next year? Mine’s very available.—Ben Keeshin, staff writer

Collector-car auctions are a frenzy, especially when it comes to cute beach toys. Recent sales have seen six-figure prices reached for frivolities like VW Microbuses and Fiat Jollys. Just when the market for adorable autos seemed impossibly oversaturated, this year at Gooding & Co.’s Pebble Beach auction, this winsome, teak-decked land-Riva started a bidding war to end all bidding wars, selling for an outrageous $660,000. If we’re in a collector-car bubble, I suppose there are worse ways out than driving.—Brett Berk, writer-at-large

Embarrassing though it is now to admit, I had V6 Mustang and Plymouth Prowler posters on my wall when I was growing up. They were the cars I idolized, and they were complete crap. If I knew then what I know now, I’d have plastered this gorgeous 507 all over my room. With the quintessential swooping roadster shape and a V8 up front, this car exudes class, and I want all of it. On auction through RM Sotheby’s, this particular 507 hit the dais Dec. 10 but failed to sell. Got a couple mil idling? Maybe the seller would be amenable to a less public forum to make a deal.—Jonathan Harper, social media editor

The General Motors Futurliner is massive, it all but screams Art Deco and it's propelled by an inline-six GMC truck engine. The driver sits more than nine feet above the road. Epic. Plus, one sold for $4 million at auction at the beginning of the year. Not bad for an oversize bus filled with cheesy dioramas.—Benjamin Preston, writer-at-large

People talk about unicorns, but I’ve seen one. Really. Eastbound on the I-10 in Santa Monica, around 2 AM, mid-summer of 2011. It was hot. So hot I thought I was hallucinating. Not only because my Citroën SM was running perfectly, but because a long, low, white supercar slid past me at no more than 65 mph. Yes. A Vector W8. In good condition. Moving under its own power. The supercar of my prepubescent dreams. I followed it all the way to Hagerty.com. A probable Level 2 car, it was worth roughly $155k that summer. I found one a few weeks later online for $175k. I might have taken out a HELOC against my apartment to pay for it, but I deemed that irresponsible. Today it’s worth $325k, outperforming the Dow Jones, NASDAQ and the S&P 500. Here’s to you, I-10 Eastbound Vector W8 under-its-own-power guy. Will such bargains ever exist again? Certainly not in 2015; the pictured car sold last year. But it’s still, for my money, the best thing to have a hammer dropped on it in years.—Alex Roy, editor-at-large

The most expensive car sold at public auction in 2015 was this prancing thoroughbred—just over $28 million, on Dec. 10 at RM Sotheby’s sale in New York. The car placed fourth in the Mille Miglia in ’56. Vintage Ferraris continue to top the charts at auctions, a testament to the vision of Enzo Ferrari, who created the brand just after World War II in Maranello, Italy. He started with a bombed-out factory at a time when owning a working light bulb was a privilege. Still today, his cars are the world’s most desired. Not the nicest man, but a genius nonetheless. —A.J. Baime, editor-at-large

I had the great good fortune of visiting Newport-Pagnell, the ancestral home of Aston Martin Works, in May. There, Aston maintains a Heritage showroom filled with a rotating cast of lovelies, each with ascot-tightening price tags. But one seemed altogether too cheap: a DB4GT Zagato, one of just 19 made, for the buy-me-now price of £1.4 million. Visions of shell companies and Nigerian-prince email scams danced in my head until I was informed it was not an original chassis. A rebody, in other words. The real, double-bubble deal, however, came up for auction just last week in New York. It sold for $14.3 million, making it the most expensive British car ever sold at public auction. Dreams die hard; delusions die harder.—Jonathan Schultz, deputy editor

Throughout the year, auction prices rose, climaxing with the sale of the $28 million Ferrari celebrated here by Mr. Baime. A crazy market tends to pull everything else up, too, but there have traditionally been some laggards. Case in point: There has always been exactly one high-dollar old Japanese car, the Toyota 2000GT. Almost any other has struggled to reach 1/10 of its million-dollar value. But in March,RM Sotheby’s sold a Japanese-market 1970 Nissan Fairlady Z 432 (think 240Z) for $253,000. There’s a long backstory to the car, and Japanese collectors don’t like to see their cars leave the country, but any way you look at it, it was huge money. It wasn’t alone, and we saw Nissan Skylines, Mazda Cosmos and Toyota FJ40s all break $100,000. Remember this car, because it marks the point when a new generation started playing with the big boys, and the hobby took notice.—David Traver Adolphus, contributing writer

Some are Ferrari people, others are Porsche people. Both have plenty to crow about in the preposterous world of classic car auctions. But the McLaren people are a special breed. They wait for years until a McLaren F1—hands down the finest sports car ever to come off the island of Great Britain, and the standard-bearer of all modern supercars—to grace the pages of RM Sotheby’s exalted auction catalog. In August at Pebble Beach, the wait was rewarded mightily when the 1998 McLaren F1 LM-Spec, Chassis No. 073, sold for a cool $13.7 million. One of only two a production F1s retrofitted with an LM engine, this exquisite product of McLaren’s Special Operations shed is a near-perfect driving machine: The aluminum V12 engine generates 680 horsepower, and the aero package is as elegant and form-equals-function as the basic F1.—Mike Guy, editor

The first watch to motor across the moon wasn’t the standard NASA-approved and -owned Omega Speedmaster, it was an American-made Bulova. A prototype. A quiet and subversive attempt to prove that Our technology could trump Their technology. And it did. When astronaut Dave Scott broke the crystal on his Omega, it was the Bulova that stepped in to save the day. And when all the NASA-owned Speedmasters got shipped off to spend the rest of their days in the Smithsonian Collection, Scott tucked the Bulova moon watch into a safety deposit box. Unearthed 44 years later and sold by RR Auction, the moon-worn Bulova went over the block for a staggering $1.63 million.—Chris Cantle, West Coast editor