Why The Auto Parts Retailers Will Slowly Go Extinct 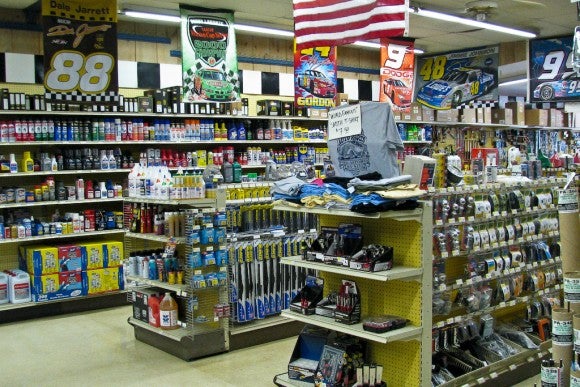 How can you compete with a business that doesn't need to make money?

Believe it or not, some of the world's best companies have emerged victorious from this exact David vs. Goliath scenario. Way back in 1973, an upstart known as Southwest Airlines had to do battle with Braniff; a billion dollar airline that enjoyed a heaping load of regulatory protections from the government. This level of protection was so bureaucratic and strong that Braniff even managed to get a not so small army of lawyers and Texas politicians to temporarily eliminate Southwest's ability to sell airline tickets.

For those of you who have followed Tesla's struggle to sell cars over the last several years, this big cartel version of gaming the system hasn't changed all that much.  Thankfully, Southwest developed one hell of an edge.

The 1970s fun, cheeky, and unapologetic advertising helped Southwest weather the storms of the marketplace, but there was far more to Southwest's success than just smiles, scantily clad stewardesses, and sassiness.  Southwest introduced a long list of efficiencies that forever changed the competitive landscape of the airline industry. Southwest became so efficient, that the once protected competitors were forced to change and innovate, or die.

Who won? Pretty much everyone except the Braniffs, Pan Ams and TWAs of that time.

It doesn't take decades for the small to become big anymore. Let me offer a personal example that led to a recent $20,000 boost to my own bottom line.  Seven years ago Autozone, Advance Auto Parts and O'Reillys were my top three suppliers of auto parts for my auto dealership along with an auto auction that I operated near downtown Atlanta. I was on the commercial side. So I received some relief over the inflated markups of a walk-in retail customer like you, But my checkbook still got beat up an awful lot due to the lack of competition in the industry.

All the brick and mortar companies went to great lengths to keep parts prices artificially high. Back then these three companies would furnish different warranties, different parts numbers, and even different name brands from the same suppliers to wiggle their way out of any price matching request. You wanted an a/c compressor or an alternator for less? Good luck! Google shopping wasn't ready for prime time, and Amazon Prime didn't provide two-day delivery. Even with a commercial discount, I couldn't come close to matching today's online retail prices.

So I paid through the nose until around 2014. Right around then, Amazon Prime became a serious competitor to those who were willing to wait a couple of days for their parts. All of a sudden a $200 auto part became a $100 auto part. Shortly after that Rockauto went into high gear and the price dropped even further.

Within a few years buying auto parts on the internet became capitalism incarnate with junkyards (car-part.com) and parts specialists (1-800-Radiator.com, LKQ Online) offering easy interfaces that let every consumer have same day service for a long list of parts. My waits became shorter, my parts bills became far cheaper, and my business with the auto parts retailers went down by nearly 80%.

What did they do? Nickelshit tactics. A non-stop assembly of hoops and gotchas that made business with them a complete pain in your 'rear end assembly'. They would price match everyone... but Amazon or Rockauto. They offered discount codes off their inflated prices with cryptic alphanumerics (PART40, TRT30) that would change almost weekly for no reason.  If those codes expired, tough luck.

There were certain vehicles that I still needed parts for that day, which involved too much labor time to risk buying used. So I would bite the bullet and pay a premium on a few of those parts. But then I had what can only be called my ultimate "Fuck it!" moments. Wrong parts. Hours on end wasted trying to wait for parts that weren't available. Supposed deliveries that never took place.  This non-stop clusterscrew of ordering parts happened... every... single... week.

The online world gradually became easier to deal with while the once reliable employees at these stores were replaced with 18 hour a week part-timers who received minimal training and zero benefits. The auto parts stores often competed against their own online operations. This level of crazy is why, today, I go well out of my way to avoid ordering parts from them.

Why did  all this happen? Simple. The big three auto parts retailers now have over 15,000 stores. The overwhelming majority of which are within a few miles from each other. Cannibalization of a shrinking audience is never a good thing. That level of overhead is dwarfed by the nearly 200,000 individual parts that have to be constantly shipped, stored and delivered to wherever the most immediate need exists.

Three companies performing the same function with the same level of overhead is a recipe for disaster once all three lose their pricing power in the marketplace. What will it take for that to happen? Not that much. It all comes down to one unique service that Amazon is slowly pursuing right now: same day delivery.

Amazon will likely achieve that service within the next three years. It may take a not so small army of well positioned distribution centers that already sell everything from books, to produce, to auto parts, to millions of products that just require boxing and shipment . Or Amazon may produce a buyout of a commercially strong competitor with a premium reputation (NAPA Auto Parts). This would further their logistical capabilities. Amazon can also partner or acquire third-party parts suppliers that already provide same day service (1-800 Radiator, LKQ, maybe even your local junkyard).

Amazon may also be able to launch a 'Prime' membership program that offers same day service for commercial customers such as auto repair shops and fleet operators. Or, they can provide tools and diagnostics that allow mechanics to use scanners and online repair guides that are coupled with their Amazon auto parts listings. Think of an Amazon Fire tablet with an OBDII scanner and a reasonably sophisticated diagnostic program. Instead of calling a store and sometimes having to drive out to pick up that part, your mechanic can just do a few clicks and that's it.

Unless the auto parts retailers can merge, consolidate and innovate on an Amazon level, they're dead. All three are already on a death spiral and unlike the Braniffs of yesteryear, there are no local bureaucrats that will save them from a free market.