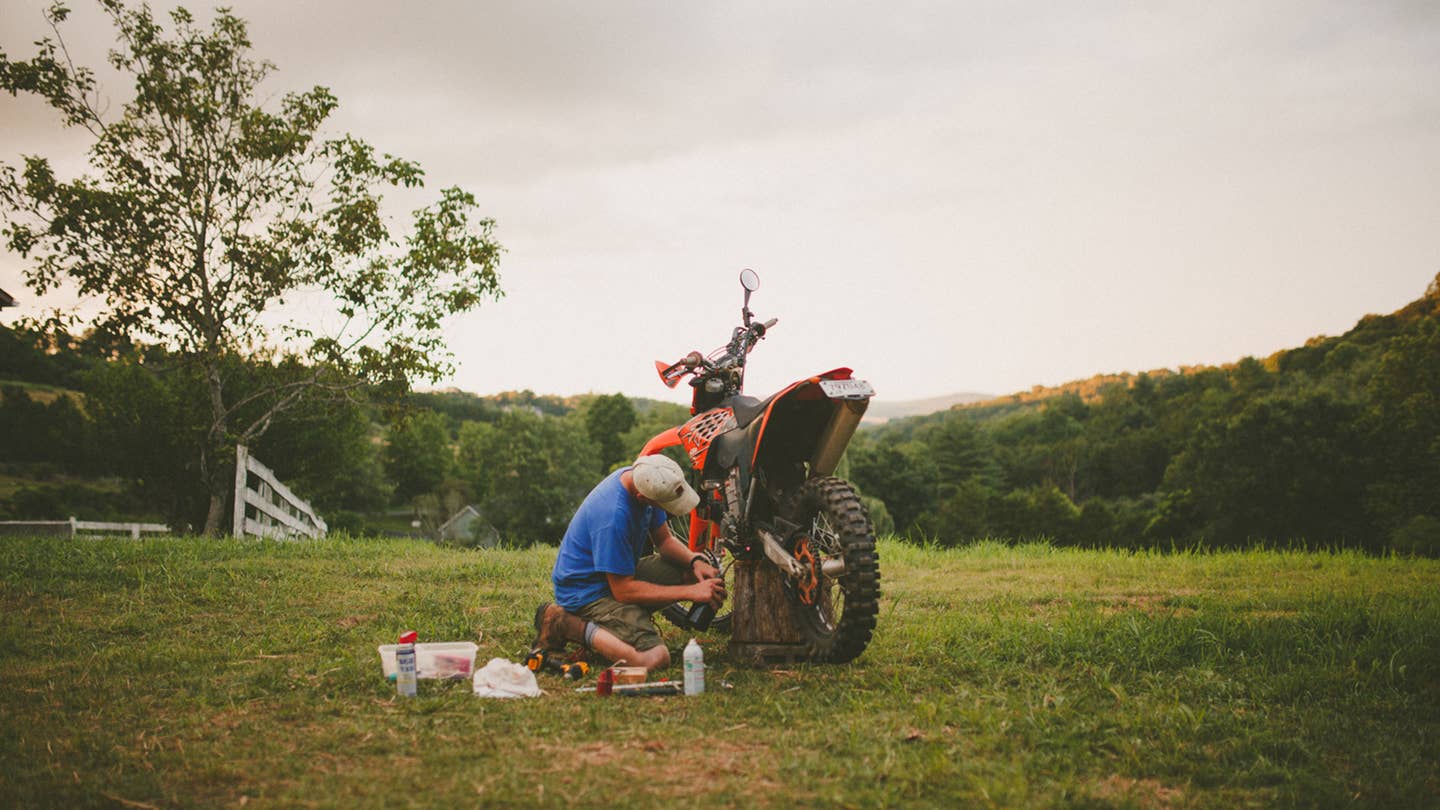 I’d been hunting a KTM since I sold my 950 Adventure in preparation for our departure. The XR400 I’d bought to balm that burn had done little but infuriate me in the interim. Carb issues. Fork seal issues. General old bike issues, ones that would be a cinch to solve with a comfortable garage and a few good beers, turned into an outright aggravation.

And then there was the transportation. The camper’s dovetail meant that no bike, no matter how small, fit with a standard hitch carrier. I’d left the Honda in Knoxville when we left, then picked it up again on our way through using a hitch extender. It bobbed. It wobbled. It threatened to jump ship at every expansion joint.

So I sold it. And, following the writs of my particular order of idiots, I commenced to shop for a replacement immediately. That’s when I found the 450. The ad was brief. It said the machine was part of an estate sale, listed a few modifications, and included two pictures from very different periods in the bike’s life. It concluded with a terse, “All offers will be evaluated.”

It did not tell the whole story. How the one owner, Nick, had bought the bike new in 2008 to ride across the continent on the Trans America Trail. How the young man took a sabbatical from a well-paying job in a gray cubicle ocean to do so. That he did it as a refutation of the health issues that had plagued him since he was 24, riding from Charlotte, North Carolina to the Pacific Ocean at 30 years old with a pacemaker in his chest, coaxing his quiet heart awake. That he endured the trek as a way to understand the father he lost when he was three, his only connection to the man a black and white photo full of flannel and the grainy gleam of a Puch Allstate.

The ad said none of that, but his brother Chris did, his voice heavy. It broke at the edges when he said Nick passed in April. That he was riding through Richmond, through the crowded streets of the Fan on his 1190 Adventure. He’d pulled a wheelie, landed it in time to ride into the side of a pickup that pulled across his path. Nick was there, then he wasn’t.

Chris sent me the digital shadows his brother left behind. The write-up of his ride west. His blog, his Instagram account. Photos and words and videos of a man ravenous for the life around him. Two days before he died, he spent an afternoon ripping around his property on the KTM, cutting a flat-track course in jeans and a t-shirt and helmet, sliding the orange bike through the rich earth a lowland Virginia cornfield.

He seemed like a good guy to have a beer with—an upstanding member of my particular order of idiots. It’s strange to feel your heart heavy with loss for a stranger, but that’s what I felt dragging at the dark space behind my ribs as I read Nick’s words and saw the love he had for all things with two wheels and no sense.

I wanted the 450 for what it was, sure enough. At a sliver under 250 pounds, wet, it pushes 51 horsepower to the rear tire through a wide-ratio six-speed. Unlike the Honda, it has a suspension made of something other than pool noodles. It's a weapon. More bike than I will ever be rider; a thing to grow into.

But there was something else: a churning in my chest. I wanted it because it was Nick’s. Because he bought it not as a toy but as a tool to pry himself from the life he was handed. And because someone should pick up that banner and do the same. Because if you ride, you know there’s a strong chance it could happen to you. That you might never make it back from the post office or the gas station or the new Thai place downtown. That the last smile you see may not be from the lips of your wife or your daughter, but from inked teeth of the flower skull at the base of your gorgeous and brooding server’s neck. And if it happens, you hope like hell someone will look after your stable.

The pictures Chris sent were of a rough machine, one that had long ago abandoned street-legal pretense for outright dirt bike duty. There were no mirrors. The front indicators were busted. The title was still in Nick’s name, and I’d have to pull some favors to get it legally registered to me. It was too much fucking work.

I wanted it anyhow, and one Saturday afternoon I drove across the mountain. Slid out highway 60 toward the gentle hills that work their way towards the old coast and wound up within spitting distance of Richmond for no other reason than to put eyes on the thing.

It was worse in person. The odometer glowed with 9,600 hard miles and more than 300 hours of running on an engine known more for spitting out countershaft seals than enduring the tides of time. Parts dangled from the machine here and there. The muffler looked like it had held the full weight of the bike more than once. The chain guard was broken and rubbing the rear sprocket. The kickstand was missing its plastic foot and the tires were gnarly knobbies that were far from street legal. It was a good time to walk away. I threw a leg over it instead, hit the ignition and listened as the thing fired right up, good and willing.

I puttered out of the driveway and down the road. Let the bike get good and warm, then ripped open the throttle. The thing pulled like a frothing mule, an overflowing fountain of grunt spilling from below. The speedometer read 50, then 70. The bike was barely breathing. It felt stable and sure, and when I clamped on the brakes, it came down from speed as it should.

I took it home and cleaned on it some. Stole a mirror, rigged the lights, and slapped the plate from the XR on the tail. I checked the fluids, then spent the whole next day ripping around the county with a few good friends. Haunted the last of Virginia’s rough and unpaved roads. Put the bike in low orbit. Got cozy stepping the tail out. Waited for it to lay down or stall or stutter, none of which it ever did. It just kept being a good and shaggy bastard.

My father says, “It’s not the years, it’s the miles.” Usually around his birthday or mine, his blue eyes bright with mischief and a half smirk on his lips. It’s as true for men as it is machines—it's not the lapping of time that gets you but the distance the days drag you. But I’m learning there’s value in being worn. In being used. That it’s better to be beaten with the fullness of your purpose than to suffer the slow decay of preservation.

I spent a few stolen hours sorting the bike over the past week, fixing or replacing what was busted in the short amount of time that I had. Maybe it was on Nick’s list. Maybe he meant to clean the thing up and fix the lights after that day of sliding around in the cornfield. Maybe he knew it needed a new air filter and just hadn’t gotten around to taking care of it. Maybe he was in the middle of it all when he died. Maybe we all are.