How I Ruined All My Cars

In which I recall a lifetime of really stupid decisions. 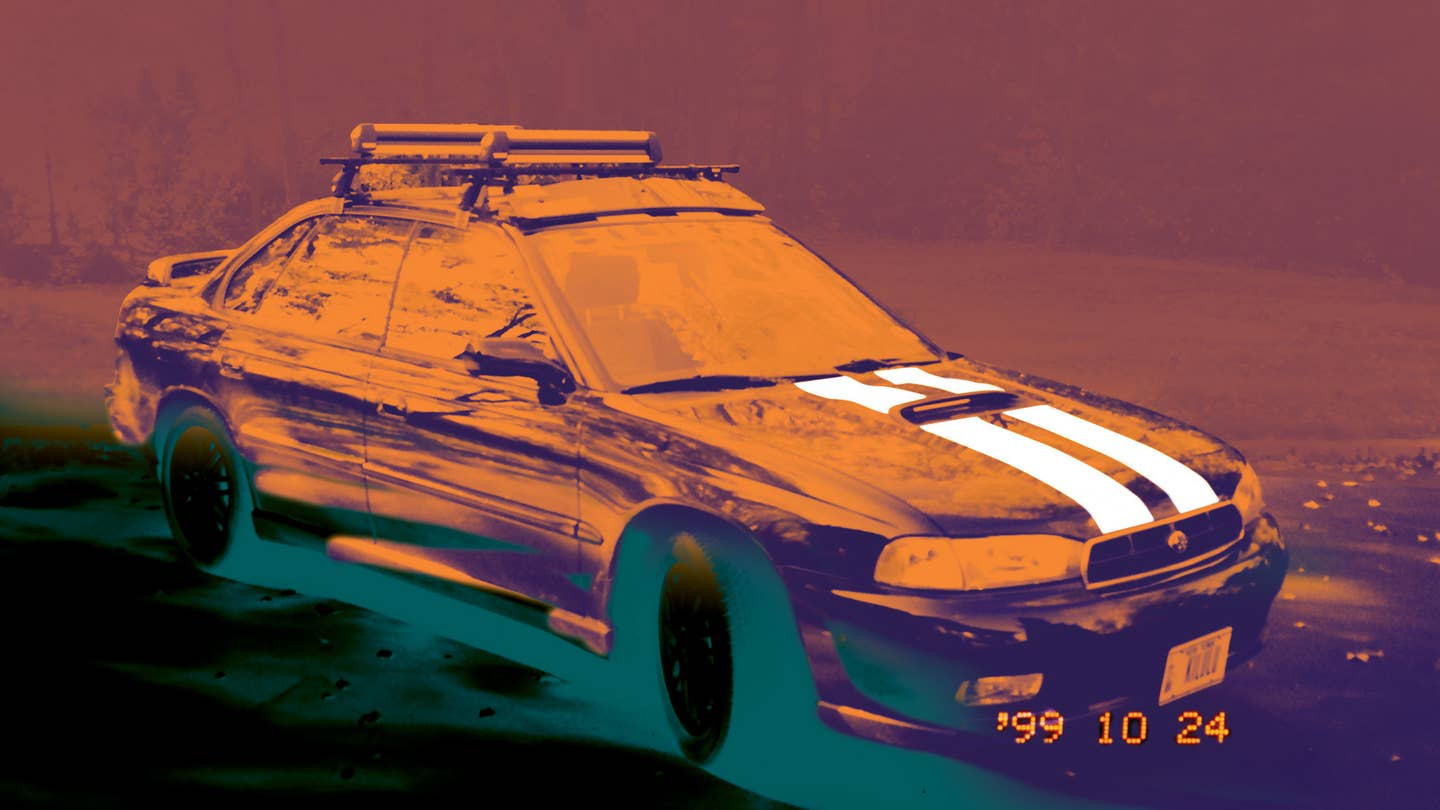 Over the last few weeks, we’ve discussed my favorite ways you all modify your cars, as well as the ways I’m not quite as fond of. Some of you vigorously defended your right to stance your cars, and frankly, I’m fine with a good stanced car, as long as looking at it is all I have to do. Once I have to drive it, ride in it, or follow one on the highway, my eyes will roll faster than my L4/L5 discs will be crushed when I hit the first pothole.

But lest I cast the first stone from my glass house, I should make one confession: I have ruined a car myself. In fact, I’ve ruined quite a few cars, in quite a few different ways. So, without further ado, here are all the cars I've owned that started out fine, then I made them worse, and all the ways in which I ruined them.

Some of you may be old enough to remember a time when Subaru did not sell a turbocharged Impreza in America. While Japan, Europe, and Australia got the WRX and STI, we were stuck with the 2.5L, 165-horsepower four-cylinder “EJ” engine—and engine that is, no joke, still powering Subarus this very day, 20 years later. With the lack of turbocharged Imprezas on our shores came the distinct lack of an aftermarket for any Subaru, including my 2.5GT, which was a perfectly nice, practical and even sporty sedan.

So I created my own aftermarket, consisting mostly of cobbling together the worst of nearly every available trend together onto one car. My friends drove muscle cars, so I put Shelby stripes down the whole body and a Hurst T-Handle shift knob on the 5-speed’s lever. The metal knob would get so hot during the summer, I had to put an embroidered PING putter cover over it when I parked. I put a bike rack on the roof, because those guys with the GTI’s did it, and it looked cool. I got a muffler from Auto Zone with those dual “DTM-style” upward-turned tips, sounded basically the same as stock and melted part of the rear bumper. I went down to Canal St. in Manhattan and bought a most-likely stolen MTX “Thunder 1,000” bass box with dual 12’s and an amplifier that may as well have been an anvil, and threw that in the trunk, with the Glade sponge behind the license plate to keep it from rattling. I swear, the rear ride height dropped half an inch from that box.

Then, to top it all off, I installed a full set of underglow phantom lights, footwell neon lights, and, I kid you not, a neon phantom light bar in the non-functional Subaru hood scoop. In my defense, this was a full two years before The Fast and the Furious came out, so the phantom lights weren’t quite as tragically uncool as they are today, but still, 35-year old me is well aware of how silly 16-year old Matt must have looked. When I went to trade the car in a year later (having run out of “aftermarket”) for a four-years older Mustang GT, the scruffy used-car salesman couldn’t have said “take that crap off the car and we’ll buy it” faster.

My 1994 Mustang GT is the product a mod-hungry teenager in search of an aftermarket. My two friends Larry and Jimmy both had Mustangs and worked on them themselves, and I wanted in on that loud, lumpy-cammed, angry muscle car action. The vast array of aftermarket performance choices drew me to muscle cars as a kid, and I basically got away clean. I never had a crash, I never broke down on the side of the road. And my car, a visual replica of the 1995 Cobra R, but with a hot-rodded GT engine and a coilover suspension from STEEDA, could even be called tasteful—almost.

I decided I was unhappy with the standard black bezel and door grab handle surrounds, so I removed them, and painted them red to match the exterior. I used automotive paint, but did what was probably a terrible job, and the paint chipped away quickly—especially on the passenger side, where unknowing passengers would clank bracelets and watches against it. Within weeks, it looked like a marble floor tile. Then, I installed “blackout” headlight and tail light covers. I don’t know who thought those things are a good idea, but after one or two night drives, even stupid me learned they are absolutely fucking not a good idea, and also that they are super, super dangerous. I’ve never been in a single car where the driver has said, “You know what the problem with this new car is? I can see too much at night.”

Car That I Ruined: 2002 Mercury Mountaineer

The Mercury Mountaineer, a badge-engineered Ford Explorer with ever-so-slightly nicer leather and a chrome grille, actually made a spectacular college road trip vehicle. It had seating for seven (one of the first midsize SUV’s to offer such a feature), a V8 engine shared with the Mustang, and all-wheel drive to deal with West Philadelphia’s horrible roads and unpredictable winters.

But 2003, it was all about car stereos. MTV Cribs was in full swing, Pimp My Ride was getting huge ratings. Everyone had big rims and TV’s in their Escalades and Denali’s. Either you had to have the biggest TV, or the most TV’s, or TV’s in some fucked up places like on the steering wheel or in the wheel wells or some shit. You saw these Escalade ESV’s, the ones the size of Suburbans, and they would have giant plasmas in the cargo compartment facing outwards. They had the flip downs, the flip outs, the flip ups—TV’s would just flip outta places.

A friend of mine in Philly was an audio installer by trade, and he wanted to use my truck for his portfolio to start his own business, so we literally put five TV monitors in the truck. We had a flip-out on the dash, and four in the headrests for everyone in the back. Then we did these Alpine Dolby Pro-Logic speakers, so it was like a whole home theater setup in the truck. It was crazy. Actually looking back on it, for the amount of miles I did, 95,000 miles in three years in that truck, it was the best thing ever.

But wait, where’s the part about ruining it?

Well, my installer friend also custom-molded a huge subwoofer box for the already-small cargo area behind the third row of seats. Meaning I didn’t have a trunk. At all. So with my huge SUV, no matter what I had to haul, it had to go in through the back doors, and sit on the leather seats. If I folded the middle row down, the cargo might end up sitting on the TV monitors on the headrests. It made using the truck as a truck; using it for anything besides carrying seven people, a monstrous pain in the ass. Imagine having to load an entire band’s worth of musical equipment through the passenger doors of a big SUV? That’s so stupid. I had basically turned a capable, practical SUV, into a luxury tour bus, which everyone but me would get to enjoy; after all, I would be driving.

I tinted the windows with a 5% limo tint, the darkest automotive tint available. In a truck with perfectly vertical windows on all sides, this turns the car into a funhouse of mirrors while driving down the highway at night. It is truly one of the scariest sensations imaginable, especially while piloting a 10,500-pound vehicle in the rain. Enough said.

I bought my Corvette young, and the then-new C5 Corvette was such a drastic step forward from the ancient C4 that to an 18-year old me, it may as well have been a supercar. It stayed stock for a full seven years until I modified the car—all at once—in 2005. Most of the modifications worked out well, and, as I’ve said, the car hasn’t let me down since. Except for the wheels.

While I do believe the gentleman’s intentions were good, and I do believe he generally did good work, I asked someone who made custom wheels to make me a set that should have been impossible, and then I never really questioned how he did it. I wanted a wheel that fit around a Stoptech Big Brake kit, but also that had a “lip” to it. All the wheels that would fit around these brakes were either flat-faced or very expensive HRE’s which, at the time, it seemed everyone already had.

But this gentleman made me a set of three-piece forged wheels, which did fit around the brakes, and did have a lip on them, and he did it at a reasonable price. Red flags should have gone up. But I didn't have any problems until my Goodyear F1 Supercar tires wore out and I fitted the then-new Michelin Pilot Super Sports. Spokes started cracking—not from pothole impacts, but under lateral loads. First one spoke, then two spokes, then five. I later learned that in order to fulfill all my requests for a wheel, he trimmed the back of the spokes to fit around the brake caliper, making the spokes weaker than they should have been. The car now wears HRE’s.

I also spent a summer, in my early 20’s, with the exhaust of the Corvette removed entirely. That’s right; I took my otherwise stock Corvette and went open headers for the summer. It made the computer go haywire, it melted some wiring, it was just a mess in general. I don’t recommend that either.

Car That I Ruined: 2013 Chevrolet Volt

I only performed one modification to my 2013 Volt, but I got that one wrong too. Went for a 20% tint on the windows, which looked cool, but it made it impossible to see out of at night. And since this was a base-model Volt with no backup camera, parallel parking or using the sideview mirrors for tight maneuvering required putting the front windows down to see. I have finally learned that a 35% tint, which I have on the Focus RS, is about right for cooling versus seeing.

We’ve been over it, with my “Nothing Surprises Me Anymore” Mustang. With this car, I’ve broken my own rules about what to avoid so you won’t ruin your car. In fact, I’ve broken rules 1 through 4 on that list. I’ve also ignored steps 1 and 3 on my list of the best ways to modify your street car. And that is why the car is currently at BBI Autosport right now with a leaking brand-new fuel tank and inconsistent steering, despite a complete column rebuild. As they say, fuck my life.

So, why do I have the right to call a car ruined in a video? Simple. I’ve been there, and we can smell our own.

Teens Steal and Crash Two Hellcats and Lyft Is 50 Percent Off During Election Day: The Evening Rush

Plus, the ultimate survival kit by Uncharted Supply Co.

Everything You Need to Know About F1’s New Teenage Driver

Welcoming a fresh face to the Big Show.

If you were waiting for a turbocharged Mazda3, Mazda says they’re too mature for that now.