Why Would Anyone Put a V8 in a Porsche Cayman?

Better question: what the hell kind of question is that?

I get dealt cars like a real gambler gets cards: in streaks. I may be looking at an inbox rather than a green felt table, but between five and ten times a day the inbox goes “ding,” and some kind fellow (or gal, but really fellow) has offered up a cool car about which I can make a video, and therefore, a living. I either accept or decline, and then schedule these cars in groups of four to six, driving all day long. I’ve done this now for 400 cars in the last 24 or so months. Pretty fantastic arrangement, if you ask me.

I'm really just a recreational gambler, but I’ve seen enough hands to know that you have to get behind a good streak. Last month, it was LS-engined cars. Streaks like that come and go. There was one month I had a dozen BMW’s. There’s been several streaks of Subarus, Mustangs, and Miatas. I constantly re-order the videos to air far out of chronological order, otherwise the audience would think I was insane. Who needs to see six different Evos in a week? After a big streak, I have to retire the marque for a while, either because I’m completely out of things to say—no matter how little it resembles the car that rolled off the factory floor—or because I’ve driven one that’s so nutty, it makes all the other versions feel lame.

But I have to crank out four of these videos per week; so occasionally a dead horse ends up getting beat. This month, I went on a hot streak with the Porsche Cayman. There were 5 of them, some better than others, but one example is so cool I have to share it here.

This is the Limitless Motorworks Cayman GT.

You may not have heard of Miami’s Limitless Motorworks, but you probably saw the screaming-dyno video circulating all the usual sites a few months back of their Ford Aluminator Coyote V8-powered 2006 Porsche Cayman. What began as a simple, stock-engine Cayman track build quickly spiraled out of control when the 3.4L flat-six went boom on its first outing. Rather than pay the Porsche Tax for a new engine or the Porsche Tuner Tax for a bigger motor with stronger internals, the owner went full 'Murica, opting for the 5.0L “Aluminator” crate engine from Ford Performance. With stronger internals, better valvetrain, slightly lower compression, and a lightweight flywheel, it makes 424 wheel horsepower and 368 lb-ft, and in the middle of a 2006 Cayman, only has 3,040 lbs to push around. To simply call it fast would be a drastic understatement.

In order to fit back there, a completely new engine compartment and firewall had to be fabricated, with the engine now divided from the cabin by lexan, and the rear hatch raised up slightly with a longer latch to keep intake temperatures at bay. The swap itself requires a Kennedy Engineered Products swap kit (LS and Viper V-10 swap kits also available). That new firewall means the fixed racing seats, installed as far back as they go, are really not ideal for anyone six feet tall or over. A quick-release steering wheel makes getting in and out less awkward, but just barely.

Everyone’s first question is, How does it mess up the balance of the Cayman? The standard 2006 Cayman S was 45/55 front-to-rear; this one is 43/57. On a race track with full telemetry, maybe you could tell the difference. In three-hundred miles of road driving around town, on highway, and in the canyons, I couldn’t tell the difference at all. Maybe there was a hint of understeer if you got on the power too early, but do you credit that to the weight balance or to the extra 175 horses?

What I can tell you is this car is an absolute riot. It sounds like NASCAR, with its custom long-tube header setup, and it makes so much torque at idle that you can roll away from lights without using the throttle at all. The clutch is easy and direct, with a somewhat high catch point; no harder than the standard car, and Limitless even figured out how to make the stock shifter linkage work with the stock 6-speed Getrag gearbox. Although the shifter handle itself is tilted slightly towards the driver rather than straight up now, for the most part, the Porsche’s factory-engineered direct shifter, pedal feel, and excellent steering remain. I’m told the stock gearbox can handle everyday use as well as track day use with proper driving techniques, but would need to be replaced or significantly upgraded for drag racing, drifting, or more abusive driving disciplines. As a courtesy, I didn’t do any burnouts.

Because the Aluminator engine does not come with power steering, since new Mustangs use EPAS and the Cayman’s stock unit was hydraulic, Limitless found a simple solution: install electric power steering from somewhere else. They had been campaigning a Gallardo GT3 and had an EPAS unit just laying around, so it now rests in the frunk. Though maybe not quite as perfect as the modern Cayman GT4 steering, it’s shockingly good both in parking lots and at speed.

The car had already been set up for the track when they lost the engine, so suspension, brakes, wheels and tires had already been sorted, only needing to be re-corner balanced with the new engine. It runs a KW Variant 3 coilover set up with track-ready rotors, fluid, and pads (the pads, specifically, were the loudest pads I’ve ever heard. But they didn’t fade a lick, no matter how hard I stood on them). It rode impressively well for a low, track-focused build, and I couldn’t make the fenders rub, which is always a plus.

The best part? The air conditioning still worked. The radio still worked. Power door locks, lights, windows—everything still worked. Well, almost everything. The tachometer and (analog) speedometer did not work, necessitating the use of an aftermarket LCD gauge cluster stuck to the windshield. You do lose most of the rear trunk space, and front trunk space is limited a bit by the power steering unit, but overall, I was blown away by the refinement and functionality of it all. The small issues—the gauges, the fact that the rear hatch propped up a bit—will all be sorted by the end of the year, they say, courtesy of a custom CANBUS interface and a vented, lexan rear window. The ’06 donor car was a high-mileage, reasonably ratty example, but you can, of course, start with any Cayman you like. Problem solved.

It dealt with LA traffic, rutted roads, the heat, light-to-light commutes, and the grocery store without so much as a hiccup. All the torque means you can shift at 2,500 RPM and still walk away from traffic. Then you find an open road, wind it past seven grand, shit yourself, and walk away from everything.

Out in the canyons, I had what could only be described as a fucking spectacular day of driving. Gulf-liveried (both Porsche and Ford raced Gulf colors, get it?), screaming its way up and down the mountains. This is hands-down the fastest Cayman I’ve driven; it’s also the best sounding, the best stopping, and the most absurd. With the racecar interior, race car exterior, and “you bet your ass this ain’t street legal in California” exhaust tone, there is nothing subtle about this build. It would absolutely smoke a GT4 Clubsport in a straight line, PDK be damned. People who heard me coming from miles away stopped me on the side of the road, demanding to look at what was in that car. Several Cayman owners at Newcomb’s Ranch drove away the second I arrived, either because they were intimidated by the size of my ‘Murica or embarrassed to be seen near me. I’m going with the former.

If it were my car, I’d do two things: 1) Realizing how cool this idea is, and how well it works, I’d have started with a nicer car. And 2) I’d have a custom, re-geared transmission. The stock gearbox works acceptably, but unlike the Porsche 3.4, there is no reason for a 500-horsepower V8 to be spinning 3500 RPM on the freeway—especially considering how well it pulls from idle, and how light the car is. Likewise, there's no reason for first to be so short. By optimizing the gears, you could probably get the 0-60 time down in the low threes, the top speed, as near as makes no difference, 200 mph, and have perfectly set up second-through-fourth for sporty driving.

OK, so most importantly, How much? And, Is that actually a good idea?

This car, the first Coyote swap done by Limitless Motorworks, cost $100,000, including the car. That’s a ton of cash, but with the fabrication work required, the amount of engineering, parts, and (presumably) labor in trial-and-error, it’s absolutely believable. Just look what I threw at a stupid Fox Body withouthaving to buy an engine. David Rodriguez, the owner of Limitless Motorworks, says that subsequent builds will cost around $50,000, plus your donor Cayman. If you want a built gearbox as well, add another $10-15,000.

Here’s when this is a good idea: when you have a Cayman with a blown engine, or a Cayman with no engine. Should you sacrifice a perfectly functioning car for a Coyote swap? Probably not, especially when you could do something like the TPC Turbo Kit, which will serve up a reliable 100 wheel horsepower for $10,000. Only a glutton for punishment, or someone who truly needs to be different at any expense, would really need something like this. It would almost be worth it just to show up at a Porsche Club track day and see that look of envy masked as disdain on the face of everyone who only has six cylinders.

But what I thought was honestly going to be a bit of a gag, a bit of a goof, something that would draw a bunch of eyeballs to the video but ultimately get back on a truck as just a gimmick, has actually turned out the opposite. It offers performance vastly beyond what was available from the Cayman in 2006, and probably on par with today’s 911 GT3. It was a SEMA car that didn’t break; a Ford-powered Porsche with good balance; an actual project car that worked properly, unsupervised, for a week, returning over 20 miles per gallon in the process despite the unnecessarily short gearing and my journalist right foot.

And so, I’m done with Caymans for a while. My streak of Caymans comes to a close, of my own choosing, the Cayman Complex finally broken by some nutjobs in Florida and a high-revving Ford V8. I know when to hold ‘em, when to fold ‘em, and when to walk away (also: when to run), and after the Cayman GT, I found an ace that I could keep. Dealing, done. 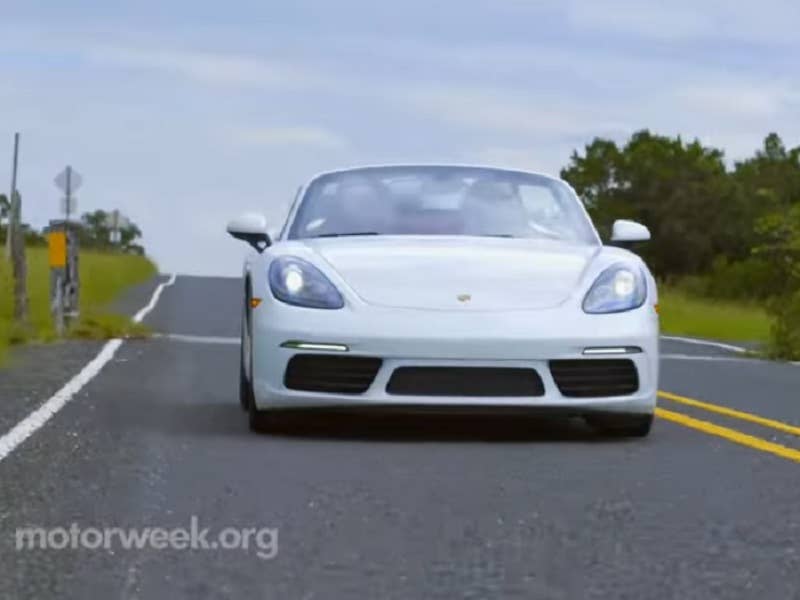 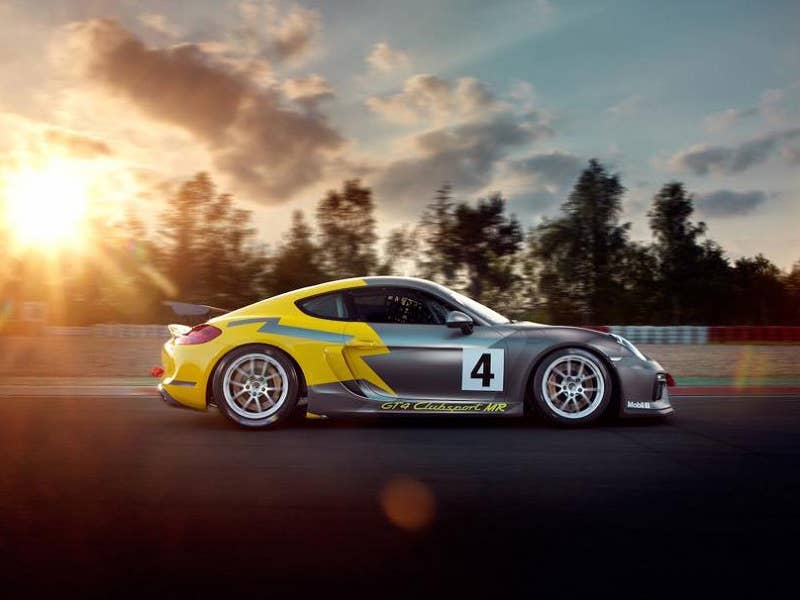 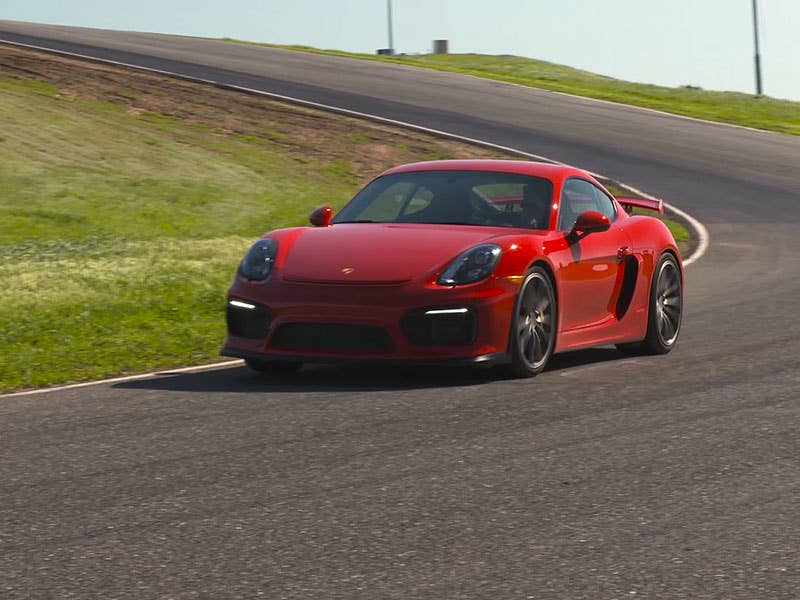 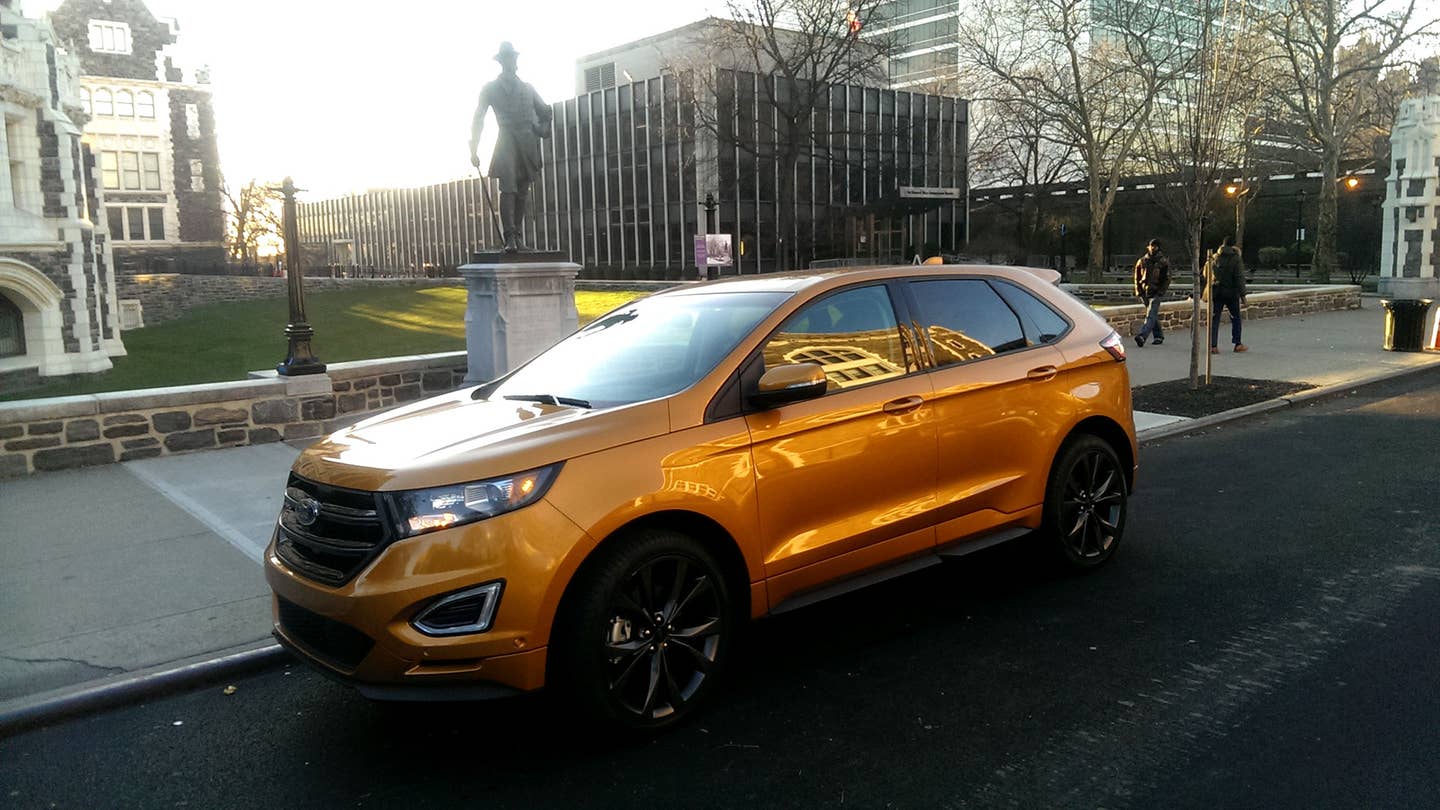 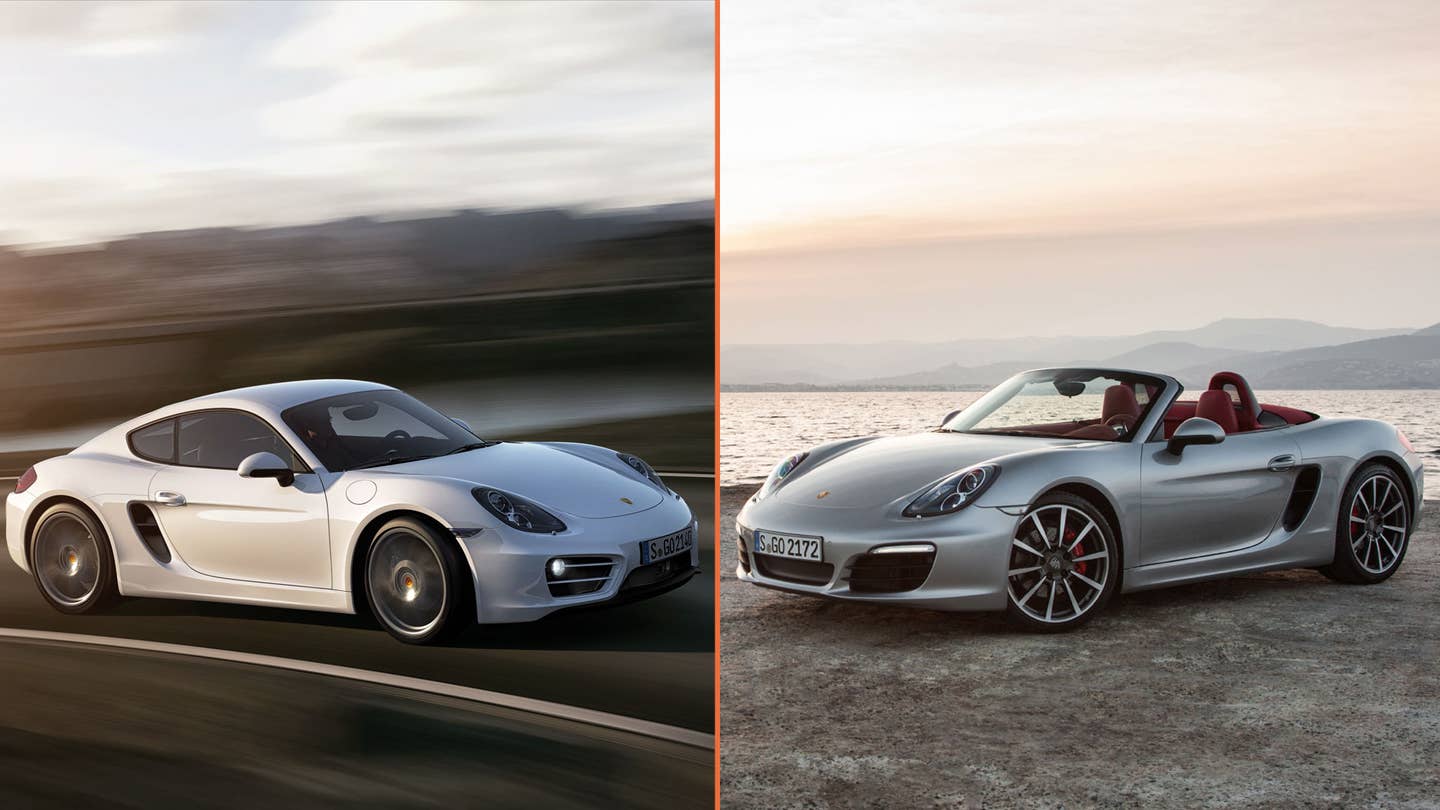