Learn From My Mistake: Don’t Drift on a Public Road and Run From Cops

There's a price to pay for the recklessness of youth. 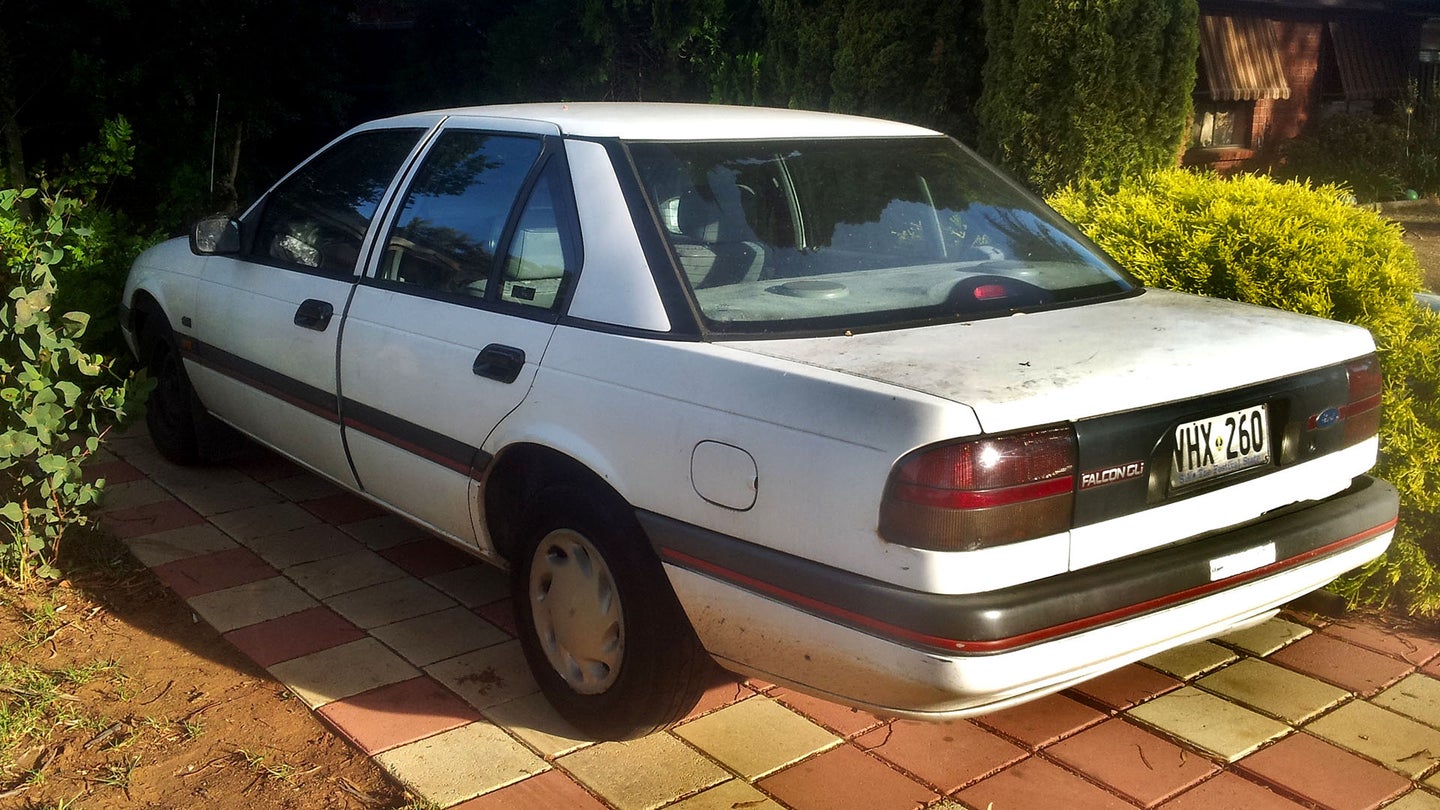 Running from the police is often glamorized in movies and TV. Even copaganda shows like World's Wildest Police Videos did much to sensationalize such behavior. The reality of such situations, however, is typically uglier and also more mundane. What follows is a first-hand account of when I drove recklessly, fled from the police, and suffered enormous consequences because of it.

This is not something I'm particularly proud of, nor is it behavior that I condone. It was a dumb move. But I am writing about it now to show you that it is certainly not worth driving like an idiot on public roads and it's even stupider to try and flee from the police to try and get away with it.

This story takes place in 2013. Back then, I had plenty of casual friends in town but only a few close ones. My typical week involved posting up at the pub on cheap beer night and enjoying the evening with whichever familiar faces drifted through. Of course, this didn't always go to plan; sometimes nobody would show and it would be a particularly dull occasion. On this night, already feeling pretty low, I found myself alone at the bar. Frustrated and bored after one beer, I called it a night and headed home.

I was behind the wheel of my first car, a hand-me-down 1992 Ford Falcon GLi, sporting the 4.0-liter straight-six—good for 200 horsepower—and inexplicably, an LSD sending drive to the rear wheels. It was named White Fear after a university game involving excesses of milk, and it represented the beginning of my adult life. It was my ticket to freedom, the vehicle that got me to all the best parties and adventures I'd ever had. 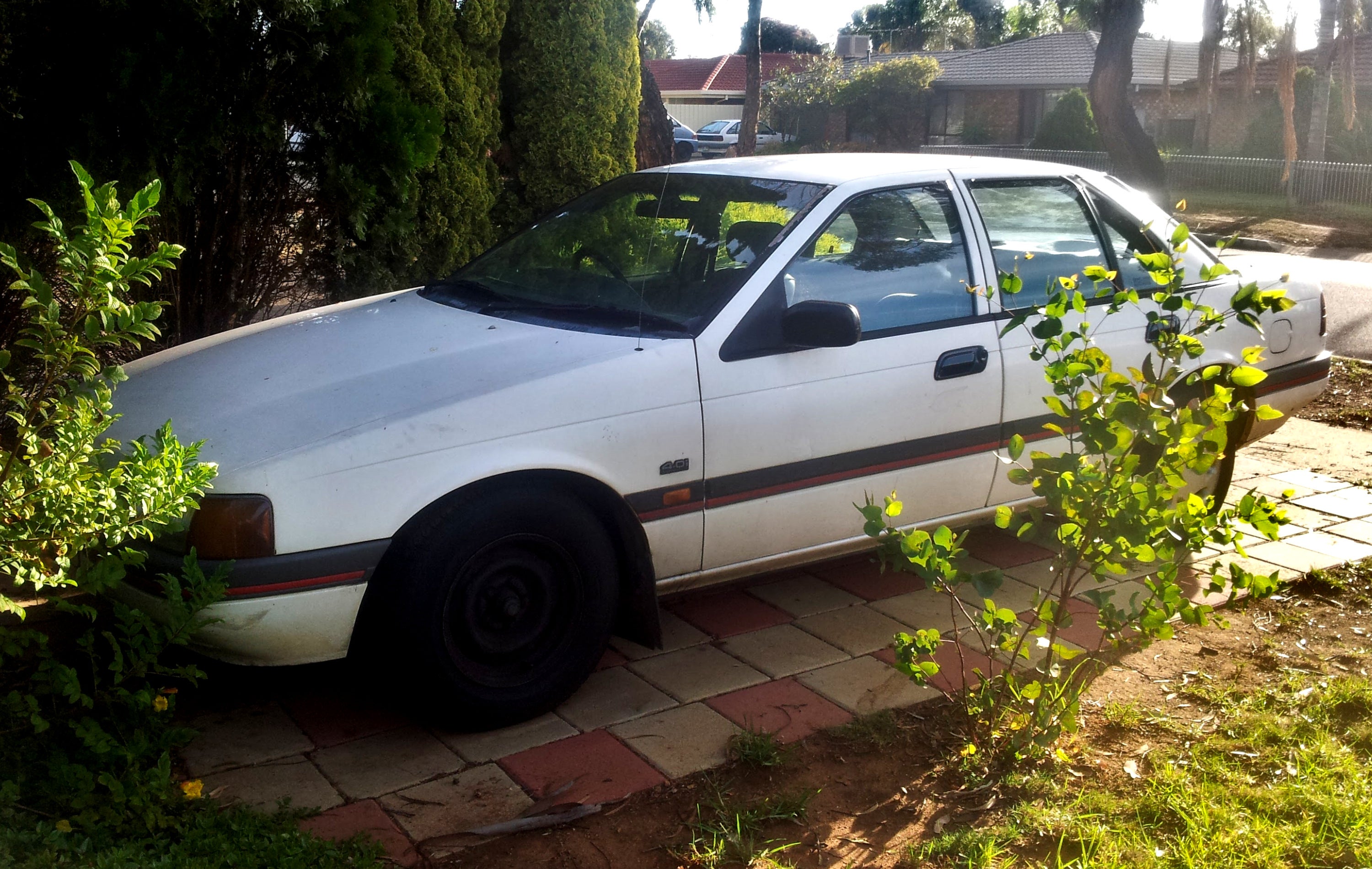 We'd bonded ever since I got the car at the tender age of 16. Back then, I'd been the one that drove everyone in my social circle around. Quite literally, without White Fear, I'd have had no social life at all. We'd all have been stuck riding the bus.

But that night, aged 22 and in the tumult of various stop-start flings and situationships, there was plenty of angst pumping through my veins as I came off the highway to the surface streets near my house not long before midnight. The alternative station decided to spin Soko's underground 2007 hit "I'll Kill Her" about a jilted lover who tearfully contemplates murdering her romantic rival. After a wasted night with no human connection, the song struck a chord, and my foot leaned heavier on the accelerator in response.

As I came to a huge roundabout, Soko's plaintive lyrics soaring from the speakers and feeling defiant, I flicked left and pulled right, kicking out the tail and squealing around the bend. I figured I'd let off some steam in the form of illicit oversteer. But at the exit came a reckoning: a patrol car traveling in the opposite direction.

As I left the roundabout, I held my nerve. Somehow at 22, I was clear-headed and decisive in tense situations. I resumed the speed limit and drove cleanly—just long enough for the police cruiser to disappear behind some bushes as it pulled a U-turn to follow me. Its lights didn't trip on immediately; had I driven calmly on, perhaps things would have gone differently. Instead, the second it disappeared out of view, I mashed the pedal to the floor in a desperate attempt to dash for safety.

Knowing I had mere seconds to get out of sight, I took the first left that came up, which, to my frustration, lead into a cul-de-sac. Given how I'd spent the better part of my life in the area, I should have known better. However, realistically, as with most police chases, there was nowhere to go. The police likely already had my number plate, and even if I had shaken them off, they would have been knocking on my door within minutes. Calling my parents and screaming at them to open the garage so I could get the car hidden from the street wasn't an option, either, because the first response to such an urgent request would have been, "But why?" That would have wasted enough time to ruin me anyway.

Not one to give up easily, though, I quickly killed the lights and switched the car off. I gamely strolled down the road with my hands in my pockets, doing my best to look as inconspicuous as possible. Of course, when you're the only fool out for a walk on a dead-end road in the middle of the night, it's not exactly difficult for the police to pick you out. The patrol car rolled up, a window rolled down, and a rather annoyed police officer asked if the car parked over there was mine. I sighed, admitted that it was, and walked back over to face the music.

Me Against the Police

At this point, it bears noting the context of the situation: I was a young white man fleeing from the police. As you'd expect in such situations, Australian police are often short and abrupt with little appetite for nonsense. However, outright violence is rare for non-violent offenses, unless being doled out towards activists, members of the queer community, or people of color. Thus, my poor decision to run in the first place was made from a place of privilege, with an implicit expectation that the risk of violence, injury, or arrest was relatively low. Unfairly low. Regardless, it was still an idiot move. There was minimal chance of escape in the first place, and my actions could have put others at risk. The decision had also clearly inflamed tensions with the officers that were now very interested in why I had tried to escape.

The simple fact is that if you're caught driving in any way abnormally by Australian police, you can expect a hefty fine for your troubles. Additionally, unless you're very lucky, the police will also likely find something about your vehicle that isn't quite up to scratch and slap a big hefty defect sticker on the front windscreen.

As a poor, struggling musician at the time, such penalties promised to be ruinous. In particular, my 1992 Falcon was not exactly in pristine showroom condition. The sills were a little rusty, the engine had a slow oil leak that had made a total mess of the bay, and the headliner was sagging proudly inside. Interior plastics were cracked and broken, and there was just a little play becoming evident in the steering.

With over 400,000 km on the clock (approximately 250,000 miles), it was a tired old car, but one that surely would have carried me for hundreds of thousands more. Those old Ford sixes simply don't quit, and parts were cheap and abundant to keep it running well into the future. Regardless, the officers found plenty of little notes with which to fill up their sheet, and a further patrol car was called in to deliver the paperwork to force my car off the road.

The whole vehicle was searched, too, as the police suspected I must have had some greater reason for running. They found nothing, as I'm simply not that interesting a person. If I was trafficking something valuable, I'd likely have been driving something nicer than a beat-up family sedan, and I'd probably have had some friends to party with, too, keeping me out of trouble. (They did, however, suspiciously eye some posters I had in the back, as my fledgling band was, at the time, quite desperate to secure a new drummer.) Fundamentally though, presenting myself as a dull and boring person helped convince them there were no drugs, money, or other exciting things in the vehicle. 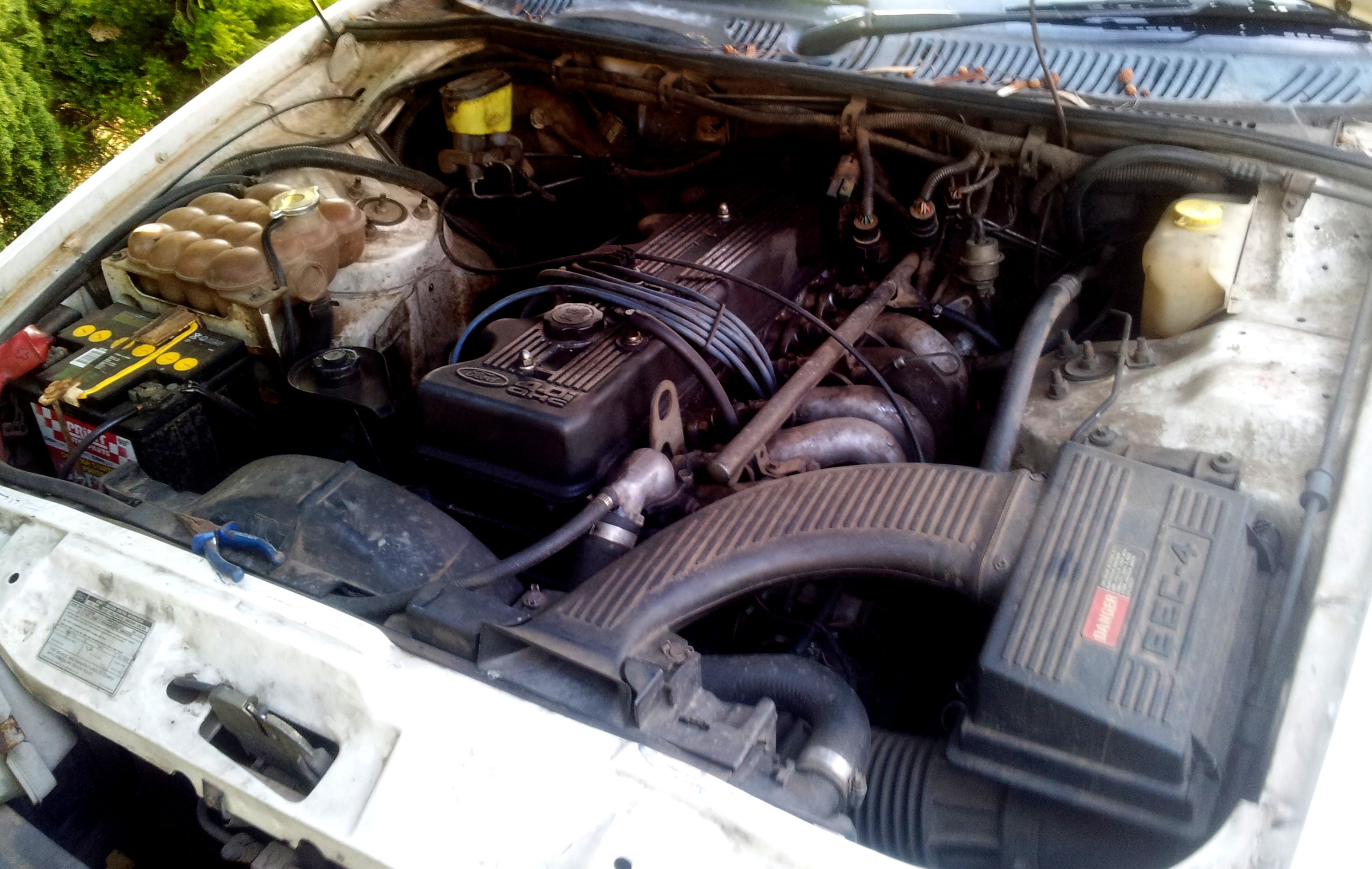 While filling out various forms, an officer started listing off the large variety of things I could be charged with over the incident, from driving an unsafe vehicle to various broken traffic rules. By this point, I'd realized I had lost, and simply explained I had made a mistake and was just a poor kid trying to get to work and back each day. In the end, I was relatively lucky to be let off with the defect notice and a heavy fine for dangerous driving over the large slide executed around the roundabout.

Upon accepting the fines and turning to leave, I made one further mistake in saying, "Thanks, boys" to the assembled officers. This was, to put it lightly, unappreciated, and I received a further verbal spray for another 60 seconds. I apologized, got in my car, and went home to sleep.

The aftermath was unfortunate. I was out several hundred dollars in fines, but worse, I had lost my first car. Technically, I could have repaired the Falcon—clearing up the various minor issues and taking it through the pits to get the defect notice removed. However, spending thousands on fixing minor oil leaks and cosmetic flaws made little sense. I hardly had the money, and it was unjustified to do so for a car worth $500 on a good day.

Instead, my first car would be consigned to the crusher as a result.

Heartbroken, I spent our last day together taking photos and reminiscing about the journey we'd had together. I'd slept in that car, I'd done more than sleep in that car, and at that time, I fully intended to die with that car. I planned to keep it forever. I had grand plans that one day, I'd turn it into my first-ever track car.

As a farewell, I smoked a first and last cigarette in my Falcon, dabbing out the butt in each of the five ashtrays in a ceremony I made up for the occasion. I'm no smoker, now or then, but smoking has a certain aesthetic way of adding gravitas to a situation. It's a frivolous tradition largely inspired by Hollywood films, but that solemn cigarette properly reflected the pain of the moment. For fate and circumstance, my friend and I were being torn apart.

My pain was evident amongst my friends. One stepped up to deliver a eulogy they'd written that White Fear deserved, reading it aloud to those assembled and bringing this chapter in my life to a close:

"And so marks the end for this magnificent mare. A fair and faithful beast, bearing her companion across the billowing blacktop; never wanting for rest, satisfied in seeing her duty done.

On countless days of sizzling sun and eves of encroaching darkness, she waited. Patiently she stood as the elements battered her, but never wavering—knowing that she alone could fare her friend in his journey of life.

She chugged and choked as the years rolled by. The occasional leak turned into mechanical mayhem. And she knew all too well that the curtain would close soon. Never one to meddle with malevolent machinations, it was time to pass the torch—to let another bear her brethren.

No fixture in the firmament she envisioned, but utter contentment,

Knowing she would live on in her carer.

As her mechanical heart ceased, the purr of her engine slowly fading into the softest whisper, a whisper that told of a life full of fond memories and happiness.

Ashes to ashes,
Rust to rust."

White Fear had carried me through countless road trips, late-night adventures, and a couple of very educational crashes that taught me the limits of my abilities. It had been an educator, a partner, but most of all, a constant companion on my journey through life. And because of one poor snap decision, it was lost to me forever.

As it turns out, our actions in life do have consequences. Be safe out there and learn from my mistakes. Don't do what I did.