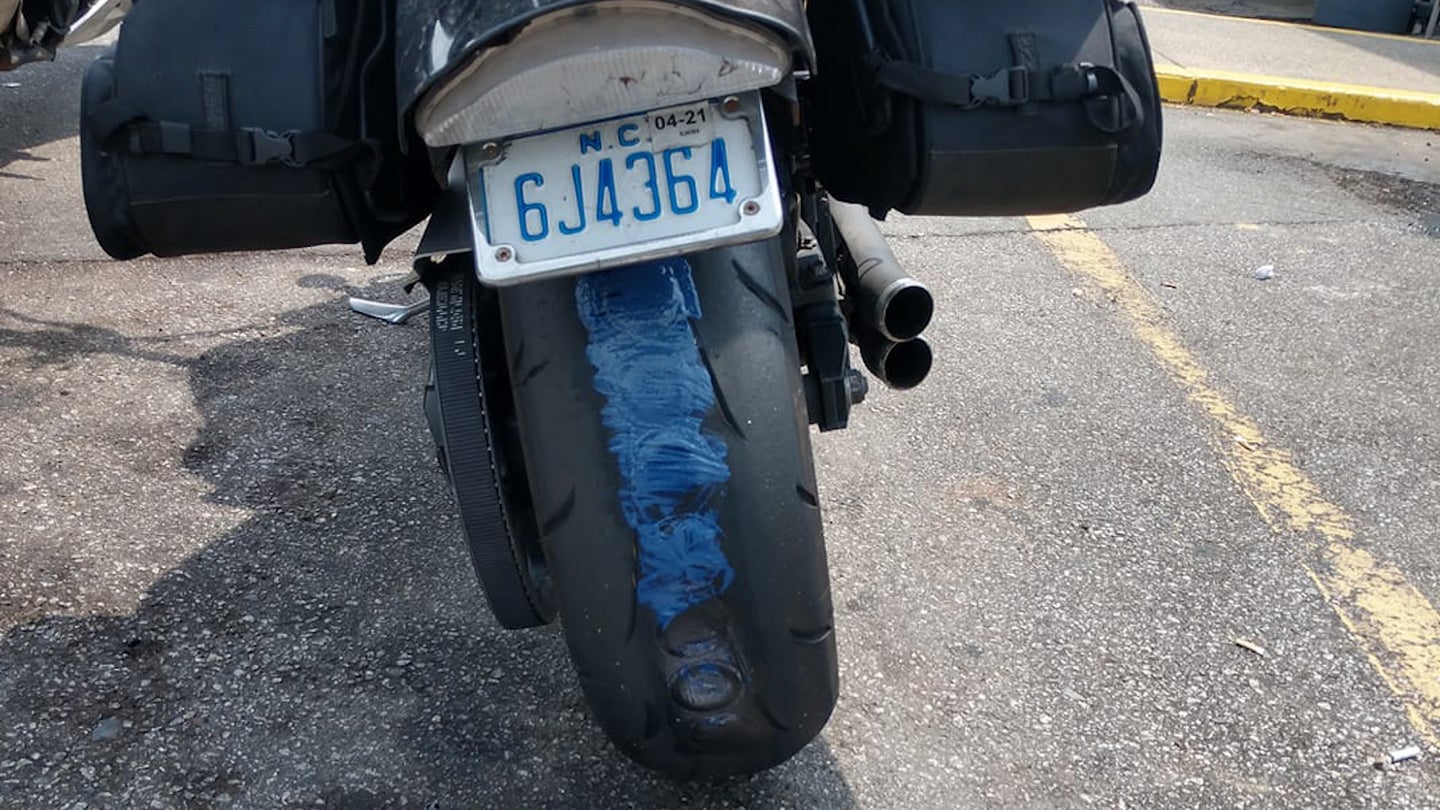 It’s not uncommon to spot crazy—and often stupid—antics on the Tail of the Dragon. Eddie Molesky doesn't fit into that category per se, though he was forced to make an impromptu repair on his bike when he visited the famous road over the fourth of July weekend. Shortly put, it involves a worn tire, a lot of rubber cement, and heaping spoonfuls of determination, for better worse.

After riding several hundred miles and doing a long stretch on a rough gravel road, Molesky discovered the back tire of his motorcycle was badly shredded. He managed to make it the remaining 250 or so miles back home with a homemade patch that you wouldn't believe without seeing. While acknowledging that the patch job was "a little janky," Molesky said that sometimes you just have to do what's necessary to get home after a long trip.

Following roughly 1,000 miles of riding, Molesky and his friends ended up at a Holiday Inn in Boone, North Carolina, when he noticed that his rear tire "looked a little thin in the middle." This was largely due to the gravel road they'd been traveling on for a while, chewing up his pavement-compound rubber. After hitting the highway the next morning, he noticed steel belts peeking out of the tire at a fuel stop, and it only got worse from there.

"Instead of just going for it and saying, 'Man I wish we would have tried something because now I'm stuck on the side of the interstate,' we pulled into a truck stop," Molesky told The Drive after his Facebook post of the fix went viral.

Once he made it to the truck stop, he picked up rubber cement, patches and liquid rubber to make his impromptu tire repair kit. The cement went on first, followed by the patches, and then the liquid rubber was used on the outside to cover everything. After a fill up with air he was on his way, but the fix didn’t hold for long.

When he first applied the patches, Molesky said he had about 250 miles left to travel. After the first 100 or so, he stopped to check the repair and found that it had worn almost completely off. He decided to go for it and made it the last 150 miles with some white-knuckle steering and plenty of luck. After all of that, the tire wasn’t all that bumpy to ride on, but Molesky wasted no time ordering a new set of tires for his bike.

Facebook comments on the tire post apparently gave Molesky plenty to laugh about after the fact, but as he explained, he's not in a hurry to try it again.