Love cars but don’t hate the environment? Here’s some gifts that can help with your footprint while still driving. 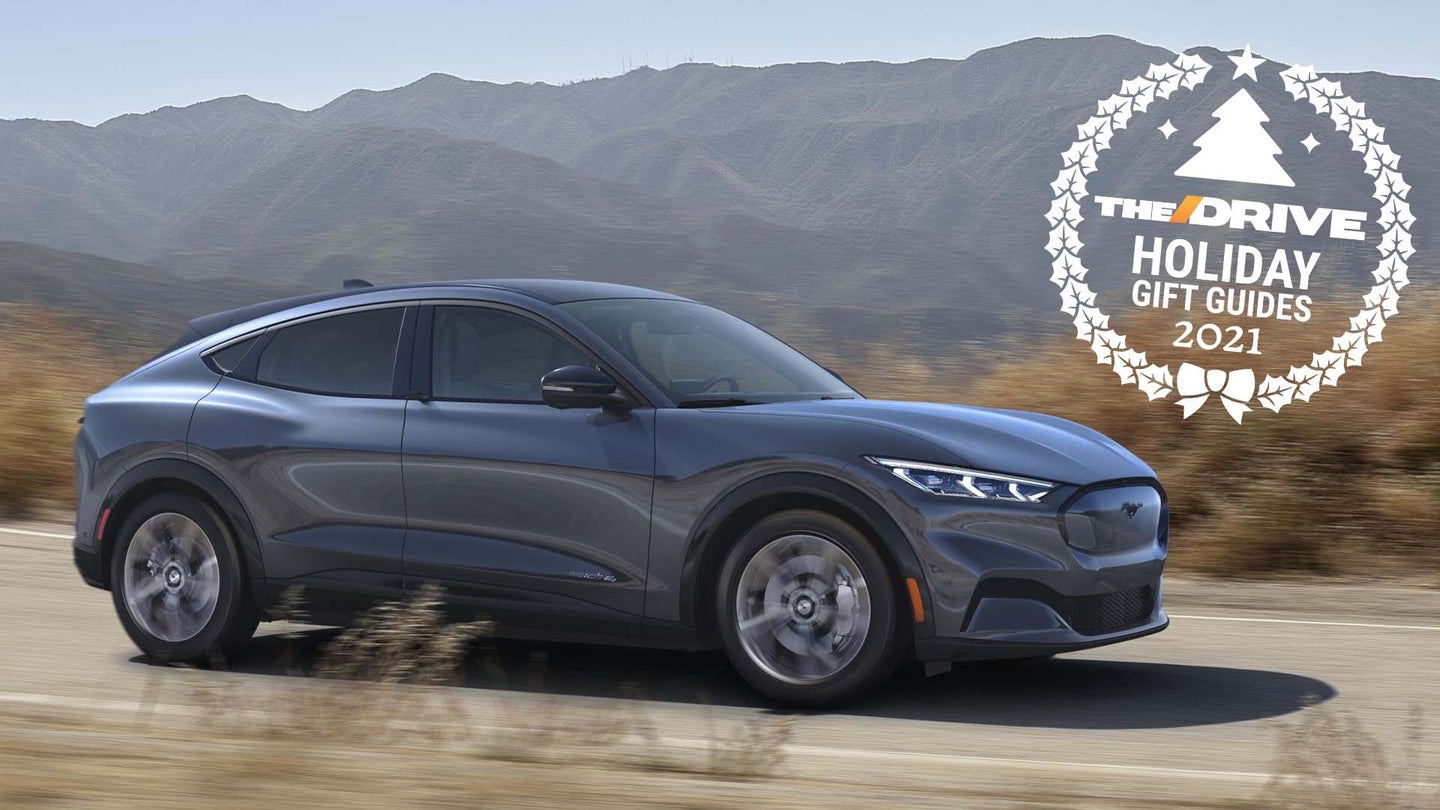 Gift-giving season is fairly tricky to get through with a clean conscience if you care about the environment, since one of the best ways to be "sustainable" is to stop buying stuff entirely. And it's even trickier if you're into cars, most of which aren't great for Mother Earth either. But for anyone who wants to indulge their enthusiasm without directly wreaking havoc with the planet (at least, more than we have already) there are a bunch of cute, offbeat or just straight-up pragmatic things out there that make great buys.

As a weak-bladdered European, I only ever use the espresso-sized Thermos bespoke-fitted to my dashboard, next to the crystalline ashtray and the baguette holder. However, during my time at The Drive I've become aware that having at least a pint of fluid available to you in the cockpit at all times is a core part of American motoring and you don't want to use hundreds of paper cups for that.

After looking around at all the 30 oz. options, the Beast has the best combination of not being outrageously expensive and doing the right job. It'd work for hot or cold drinks and has two straws and an anti-spill lid, so you don't need to worry about coating the interior of your car with ice tea if you take a corner suddenly. A genuinely nice touch is that the straws have a cleaning brush with them, so you don't have to ask if there's a weird taste in your drink or if you didn't quite wash the cup out last time.

In terms of sustainable fabrics for cars, automakers and suppliers alike are going hard on anything they can find to up their eco-credentials. Reclaimed ocean plastics feature in the BMW iX and Mercedes EQS and although leather persists as a luxury option, plenty of OEMs are offering alternatives with wool and vegan interiors.

Yes, car mats are boring. But let's be real: If you're not in the market to reupholster your whole dang car then they're an easy enough place to make a sustainable choice when the time comes to finally get rid of whatever mud-caked horror you've been parking your feet on. For those of us who are freaks about taking our shoes off to drive, too, it helps if the car mat has a nice texture.

Coconut mats are hardly brand new technology but they do have the advantage of being sustainable and natural. They wash well, they're not crazy expensive and you don't get that sweaty polyester feel. GG Bailey offers a massive range of colors and sizes for pretty much any car.

This is a relatively small thing, but we all plug our phones into our cars now, so you might as well do it in a way that's making this better, rather than worse. Le Cord's charging cables are made from reclaimed sea plastics, so buying one actively avoids making new plastic waste and reclaims some of the existing problems in the ocean.

The cables are made by collecting fishing nets, which are a huge part of the plastic waste that's polluting the world's waters. So-called "ghost nets" are among the most deadly garbage in the sea for marine life, trapping animals and making up 46 percent of the Great Pacific Garbage Patch. Yanking a few of them out of the water and turning them into phone chargers is a relatively small saving on plastic waste but with things the way they are, every little detail helps.

Alright, we all kind of know a Magic Tree is unlikely to be the most sustainable thing around but also: you've got dogs, you've got kids, you've got stuff to haul around in your car and you don't want it to consistently smell like cold sweat.

Granted, the name Eco Freshies activates some kind of anti-twee response in me that damn near kept them off this list. But after looking at a bunch of options, this combines both genuinely sustainable materials and values and a product that will actually work. Eco Freshies use air-dried clay fresheners, that absorb essential oils and can be topped up whenever you need to make your car not smell like pets or sports or whatever. They're pretty much infinitely reusable and even have some cute, festive designs.

If you're anything like me then your car is probably full of what can only be classified as "stuff." At this point in my life, I can admit that I'm never gonna change my ways and that my car is one of my many stuff repositories. But I can buy a big old bag so that if I let people who don't live like gremlins into my vehicle, it's easy to instantly tidy up my collection of half-empty cans of oil, interesting rocks, and other junk I've found.

Spanish brand EcoAlf uses recycled polyester to make an admittedly pricey but genuinely classy, sustainably reclaimed shopper that creates the illusion that you have your life under control as well as it does the IKEA run. EcoAlf gets its fibers from landfills and processes sea plastics to make their products, so new fibers are minimized and each item actively addresses waste.

It's winter, which means there's ice on your car. Most scrapers have two problems: they're not very good and they're made of plastic. The Kungs MID-IS solves both of these by being a bit of Finnish engineering that goes out of its way both to be made out of recycled parts and to actually guarantee it'll be of some use.

Anyone who's had the disheartening experience of having bits of your scraper snap off, while the windshield stays firmly iced, can take heart with the fact that this is an incredibly reasonably priced product that, in its Eco Model, is also kind to the environment. The weather's set to get more extreme as climate change progresses, so get one of these now.

Again, you do stuff with your car. You put kids and dogs and interesting rocks (I may have a problem) inside it. And if your car's very much less in the luxury segment than the lugging stuff one then you probably have a crappy, fraying tarpaulin or two knocking around in the trunk.

Plastic tarp is horrible in sustainability terms; it's not durable, it's not really recyclable and it often ends up parked in a landfill forever. So although cotton is a problem in some contexts, it's a lot better to get a long-lasting, heavy canvas tarp than to run through your fifth torn blue one of the year. Plus it does kinda look a lot nicer and doesn't squeak when you shove a box of stuff over it. Glamptex makes heavy canvas tarps that are sized to pretty much any trunk or frunk.

This isn't the most glamorous thing in history but washing your car is an ecological concern. First, using a hose is gonna take up water, which isn't ideal, and secondly, there are all kinds of chemicals in the stuff you actually put on your car—ironically mostly to remove the film of particulates and other bad things that have come out of (mostly) other people's cars.

But not all of us want to ride round in a dusty heap. Chemical Guys' EcoSmart waterless wash works with carnauba wax to make a product that coats and protects your car, lifting off all the grime with a fraction of the amount of water you'd use otherwise. Despite the lurid green color, it's natural and you don't have to worry about the small amount that gets washed away going down the drain. Downside: no longer an excuse not to clean your car but hey, it's a gift that's whoever receives its problem.

This is not a purely practical item per se, but hey, it is a gift. Car paint is relatively hard to recycle, although of course we get through plenty of it with chips and scratches and top ups and resprays.

Fordite is a jewelry material that's made of paint leftovers. Residue in auto shops gets molded into decorative shapes and used like glass or amber could be, saving it from ending up in a landfill. Arguably, it's just cool jewelry (even F1 drivers have them) but given it's also a way of making use of automotive waste that'd otherwise end up clogging up the planet, stuff like this ring by DeltaF Designs are a neat way of saving something.

Put up a different kind of tree this holiday season. If you can avoid generating CO2 then that's always better than trying to mitigate it afterward. But if there's anyone you know who's wracked with guilt over their driving but doesn't currently have another option then yeah, you can pay to salve their conscience.

Our Trace lets you buy gift packages that commit to a certain amount of carbon offset and a certain number of trees planted, so you've got some guarantee that there will be a meaningful effect.

7 Great Gifts for the Apartment-Dwelling Mechanic

Space is a premium, and so is keeping things clean.

You may not use them every day, but you’ll be happy that you have them.

The Best Gifts for Automotive Photographers Who Already Have the Camera

Cameras and lenses are a discussion for another time. We’re focusing on accessories and clothes today.