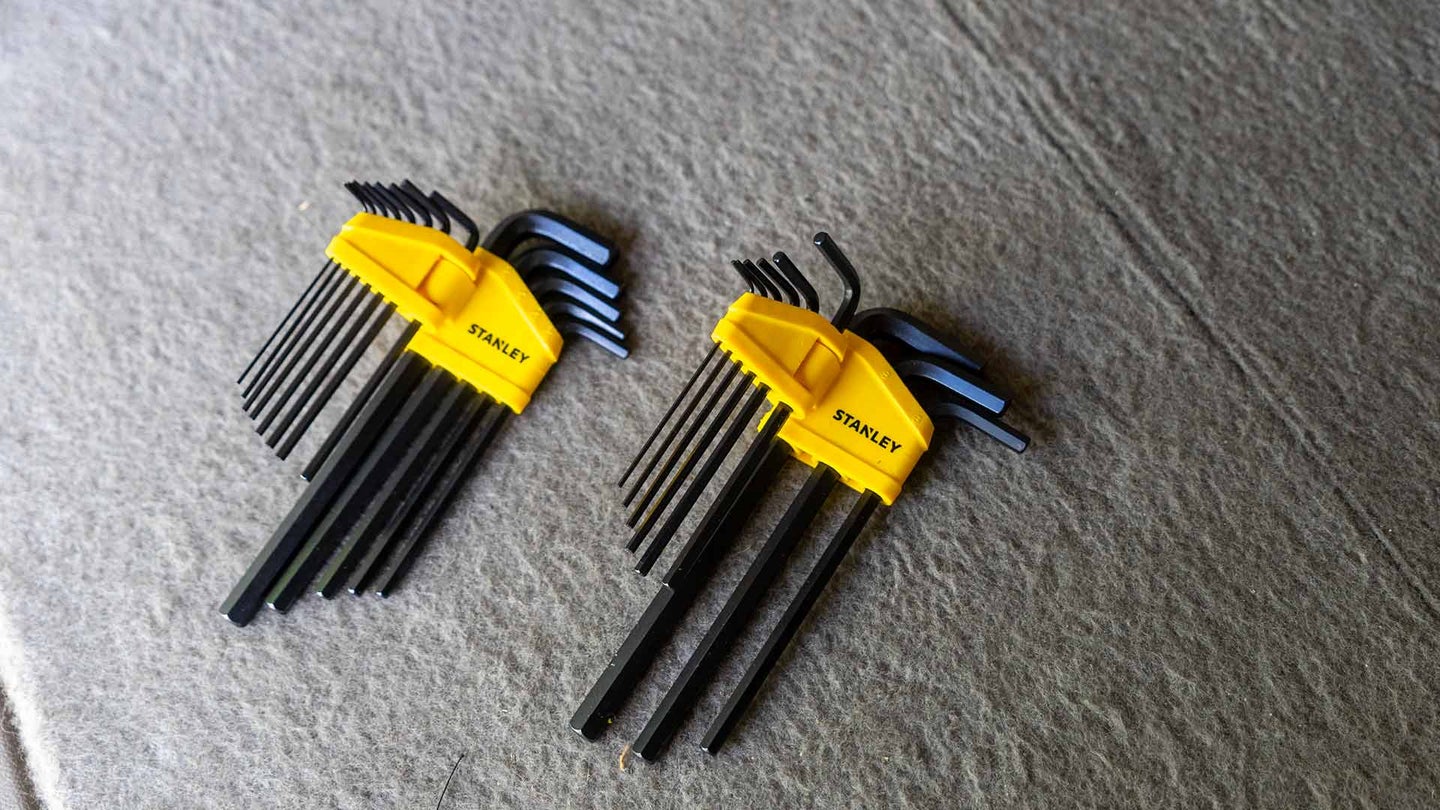 For weeks, I eagerly awaited the delivery of a set of cargo crossbars for our 2017 Chevrolet Suburban, and I planned to get to work on them with a Stanley hex-key set. The SUV didn’t come with crossbars when I bought it, and since I needed to put the set to the test, it seemed like the perfect project. I patiently waited to demolish this no-brainer automotive project, and yet when the crossbars showed up, it was with Torx bolts. (#fml)

While wracking my brain for other automotive-themed projects to accomplish with the Stanley hex keys, I remembered my daughter’s crib. It’s the only thing in our house that uses Allen-head bolts, although it’s hardly a car-related task. As I sat there, I laid out the Suburban crossbars and looked at the rest of the hardware — just to gaze at my mess.

The crossbars came in three pieces. The ends of the crossbars connect to the Suburban side rails with Torx bolts, which have heads with a six-pointed star pattern. The middle of the crossbars, however, attaches to the crossbar ends with Allen-head, or hex-head, bolts with a hexagonal drive. The Yakima Skybox then sits on top of the crossbars with no screws. My saving grace.

Let’s get to work.

The Stanley Hex-Key Set, with SAE and metric tools, arrived in a cardboard box from Amazon undented and surprisingly dry for the amount of rain that had fallen recently.

The Stanley set was encased in ultra-tough and rigid plastic blister packaging. It’s the type of hard plastic that, once you cut it, is liable to cut you. I traced around the set with a razor and flipped the packaging over — and everything fell onto my bench. 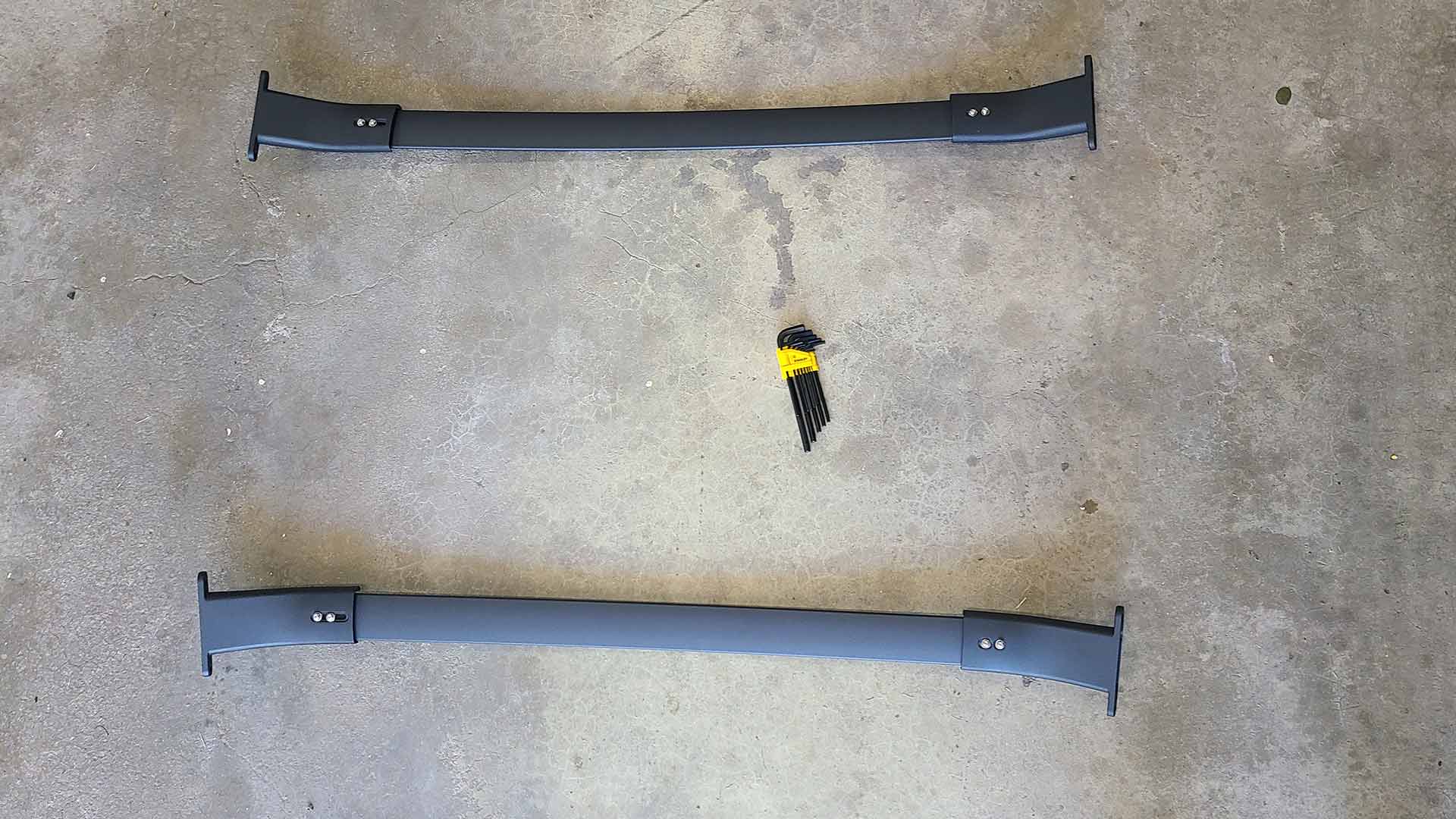 The racks in question. Chris Tracy 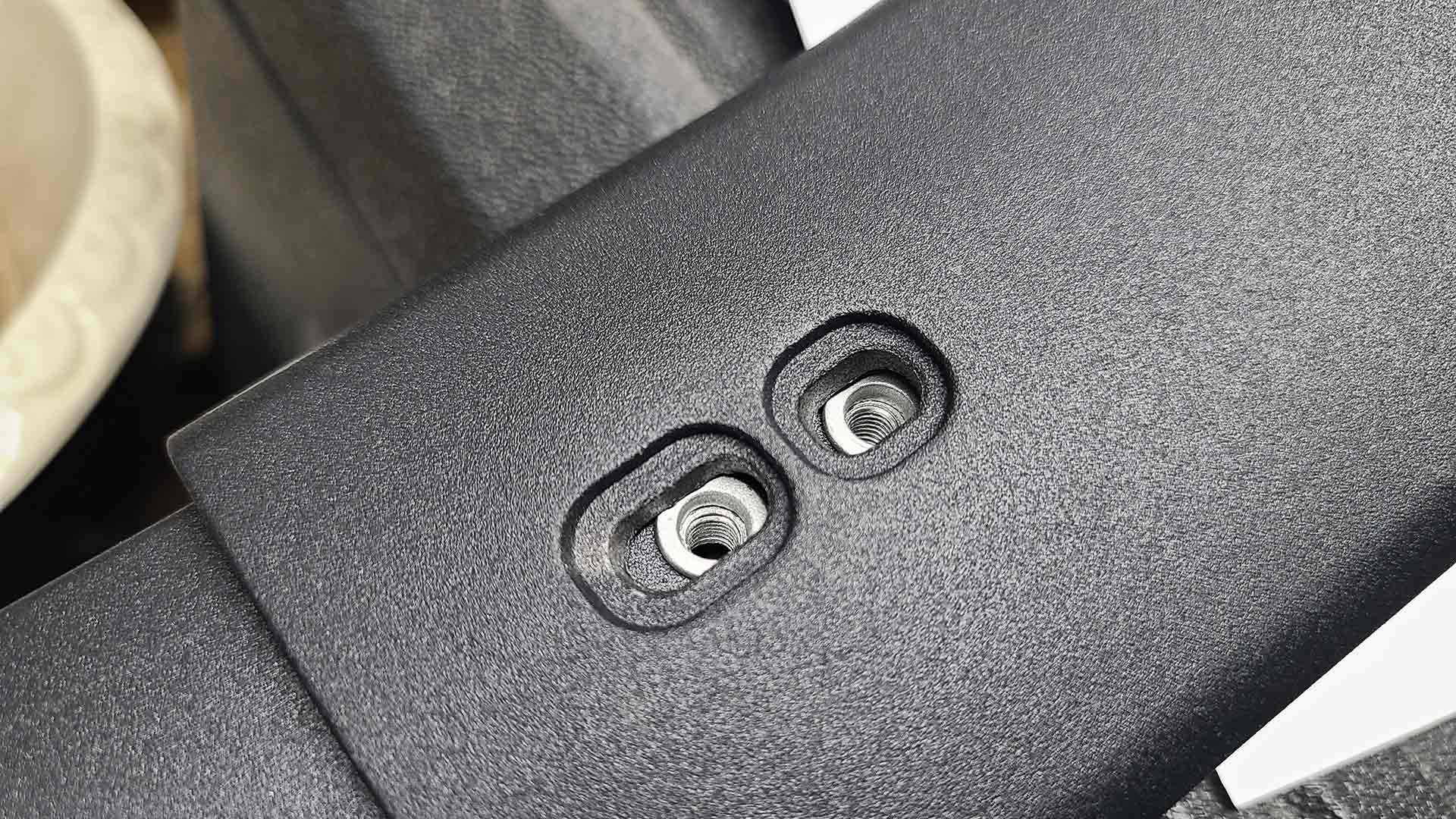 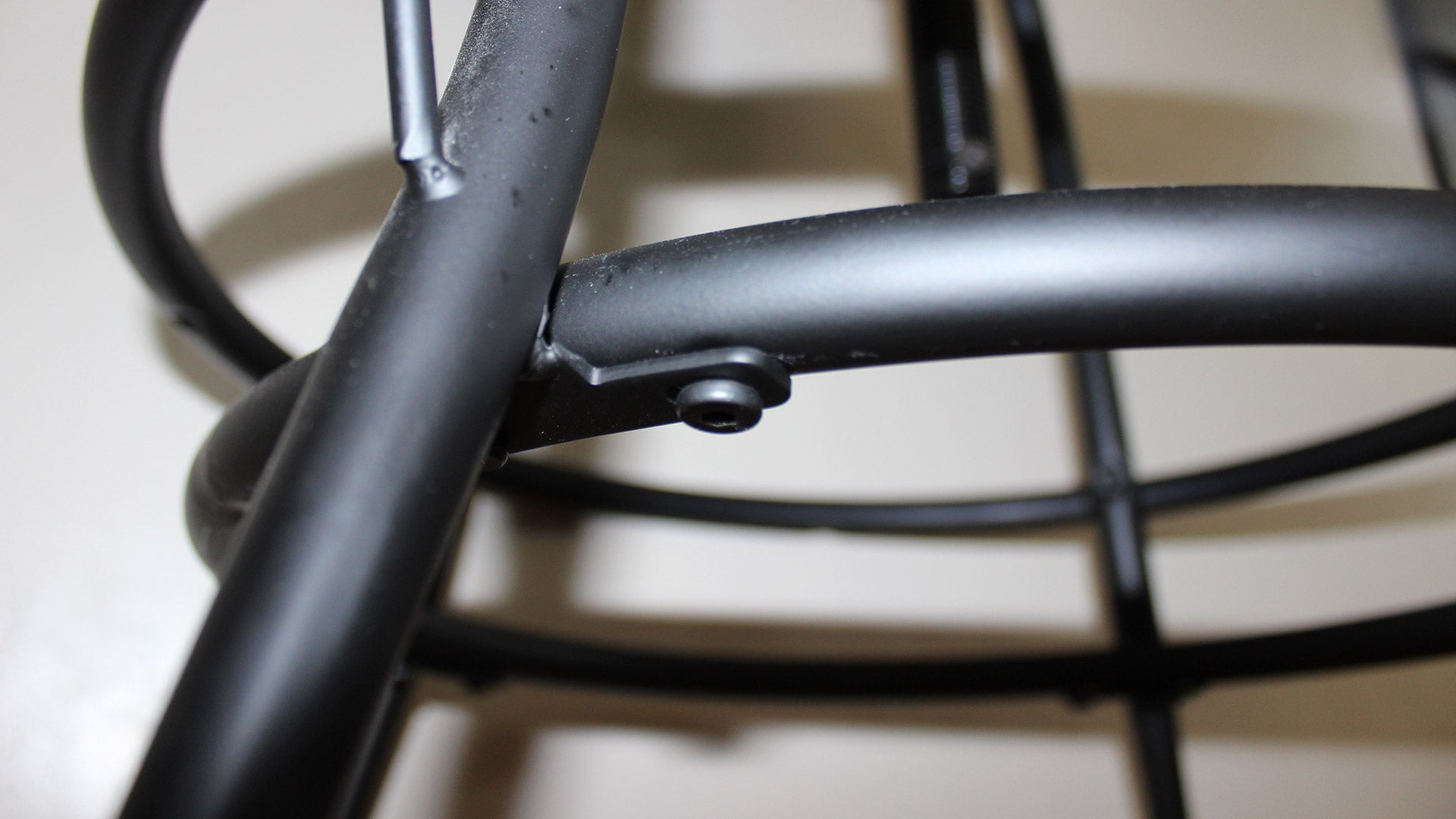 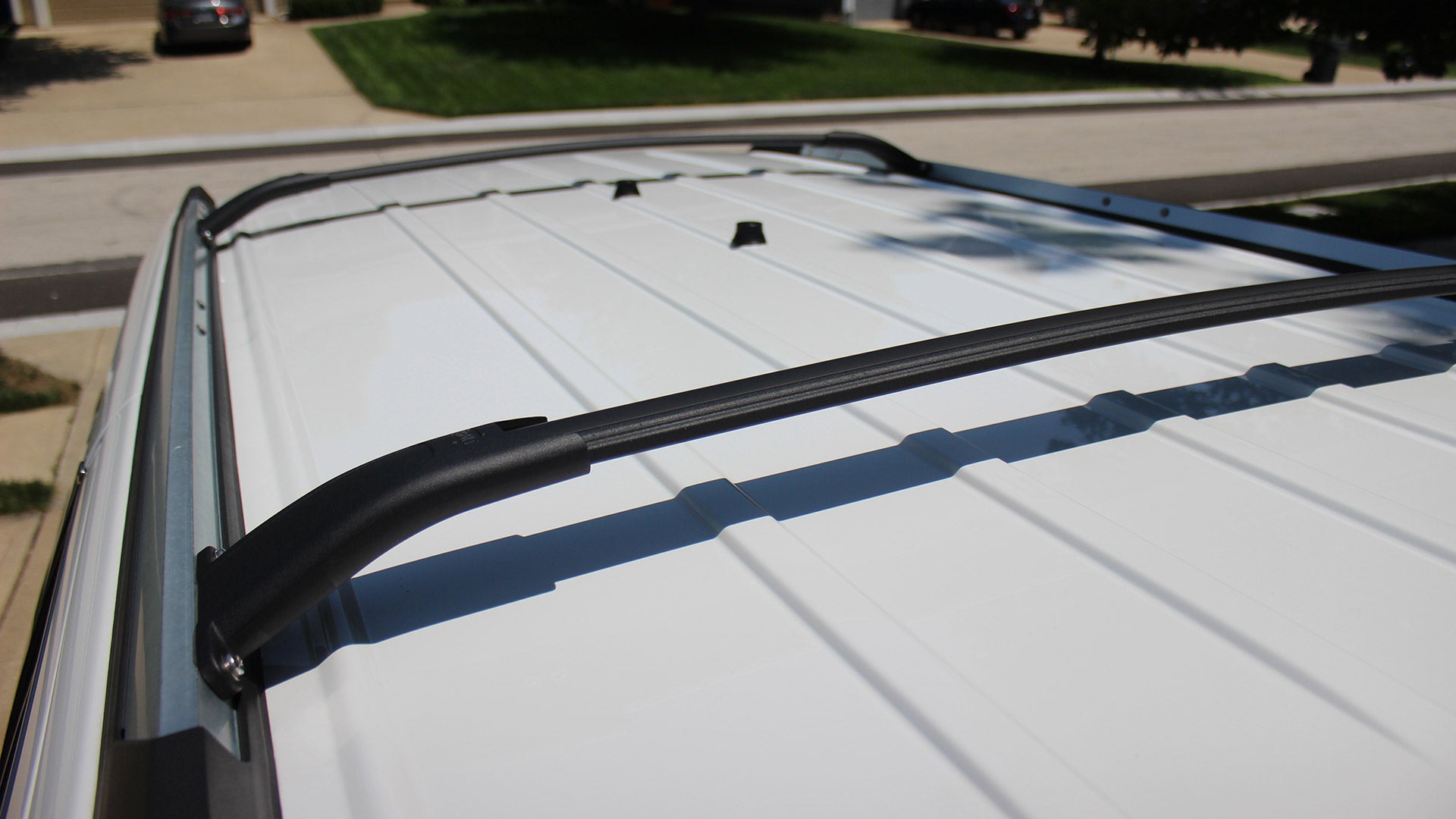 The rack atop the car. Chris Tracy 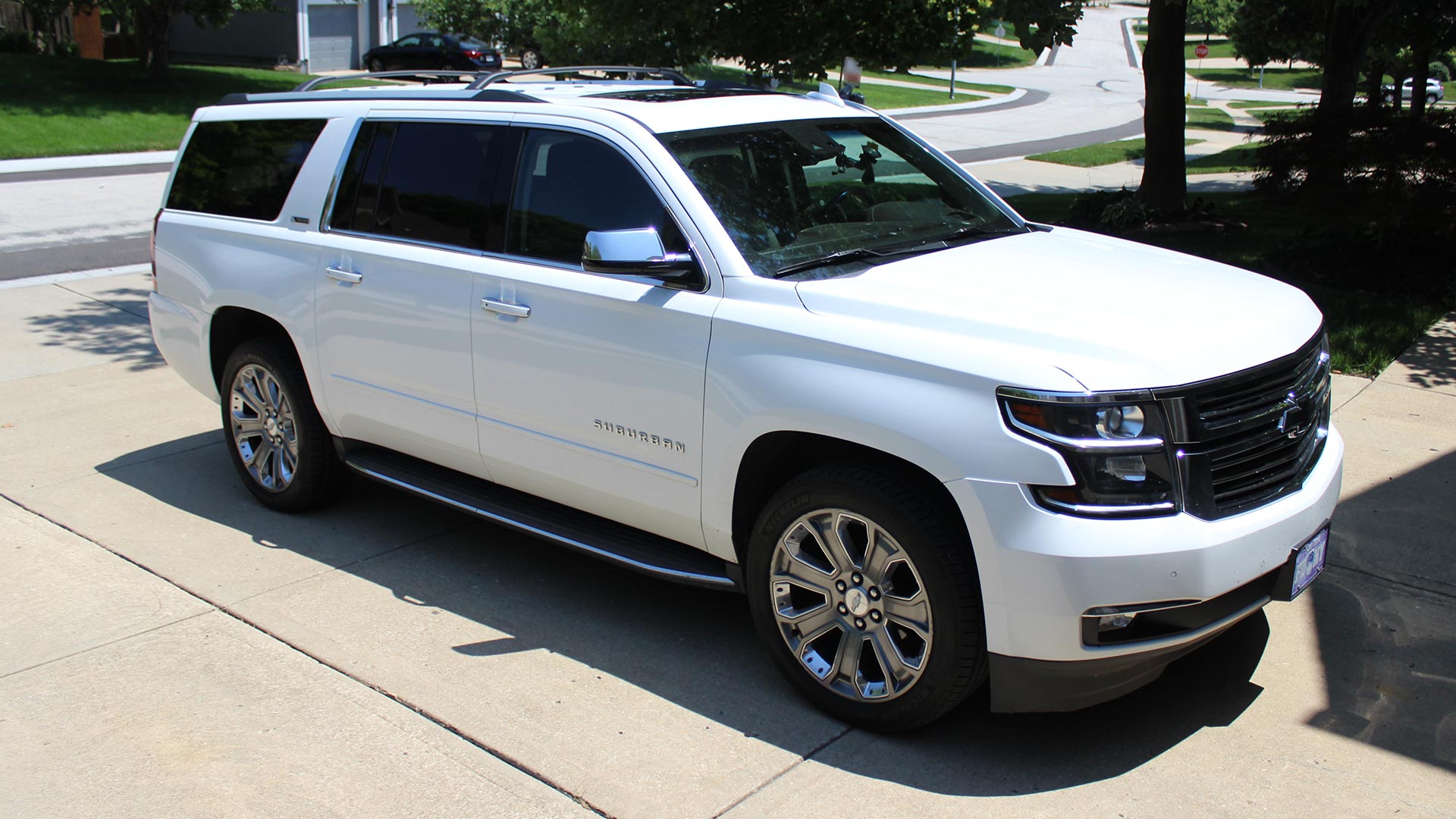 The SUV with the rack installed. Chris Tracy

Getting After It With the Stanley Hex Key Set

With the addition of a few Torx keys I had, I set off adding the rack to my Suburban. That’s when I made my first mistake. It had nothing to do with the Stanley set and everything to do with a lack of logical progression.

Instead of inspecting the supplied bolts and finding the correct key to fit them while still on my workbench, I waited until I had everything on top of the SUV. My second mistake was tightening the ends of the crossbars and leaving the rack on the roof, making the entire process of trying to find the right key for the job even more difficult. I also should have taken the entire metric hex set with me on top of the Suburban. Please, learn from my mistakes.

I also put together my daughter’s crib, which the set handled beautifully.

Between the SAE and metric sets, there are few jobs you won’t be able to tackle with these tools. I also discovered while using the set that the long-arm design allowed me to get a better grip and apply appropriate torque to each of the bolts. It helped me hold pressure against the tool and bolt while tightening the rack’s crossbars in place.

The hard-plastic sheaths for the individual Stanley sets open like a book to allow you to remove any key without much interference, other than the next larger key. Once the tool is removed, there’s nothing stopping you from completing your task.

I have other hex-key sets that are mounted to a folding-style holder, and they can be difficult to use in cramped situations, especially when the keys you’re not using start to open and get in the way of the tool in use.

What’s Not Great About the Stanley Hex-Key Set

The only downside is more of a gripe about me than the actual tool. Specifically, I’m talking about the individual hex-key size labels. Their raised printing is the same color as the case, making them difficult to read. It wouldn’t be that big of a deal if it also wasn’t written in an incredibly small font. My 40-year-old eyes were struggling, even with glasses on.

While I like the long handles for extra torque, I can see how they might be a hindrance in tight spaces. I didn’t run into anything of the sort using the tools this time, but the tightness of an engine bay, behind a firewall, or in a cramped space under a table might be an issue.

Our Verdict on Stanley Hex-Key Set

If you’ve got boatloads of projects requiring Allen/hex keys, who are you, and what do you do? We must talk. In general, though, I’d definitely recommend the Stanley hex-key set. Not only did they help get my Suburban crossbars in place, but I can also vouch for them in the disassembly and reassembly of my daughter’s crib.

I was able to eliminate a loose wiggle in her crib that she caused by continuously singing and dancing to “No More Monkeys Jumping on the Bed.” So, I get my roof rack and I’ll sleep more soundly knowing her crib is secure. The price of the set is also reasonable, coming in at just $24.10 at the time of writing on Amazon. They’re more than worth your consideration. 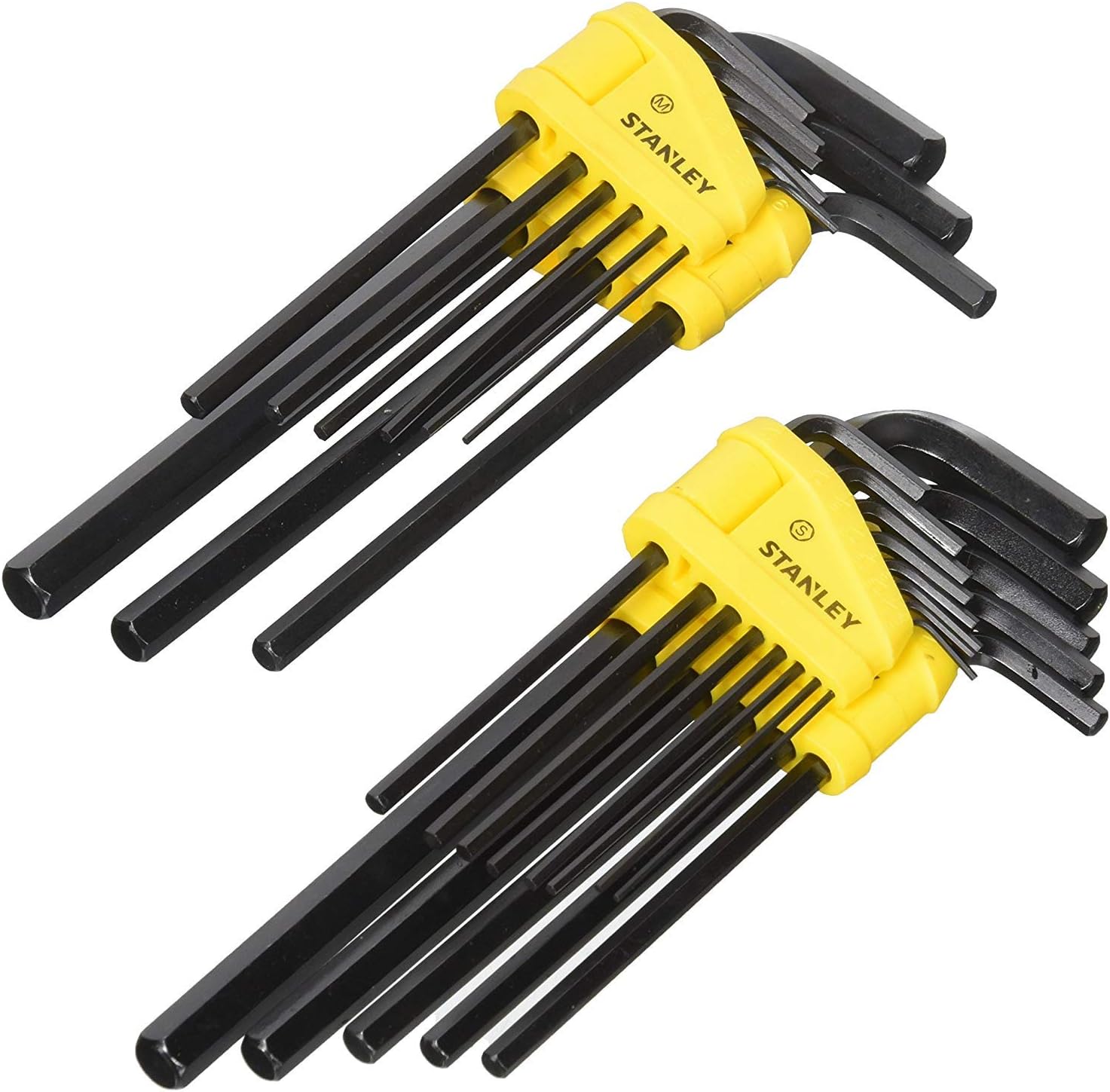 Reasonably priced and fully complete. What more could you want? If you're looking for a comprehensive hex key set, you've found it.

FAQs About the Stanley Hex-Key Set

Q. Do the containers for the hex-key sets have a clasp or latch?

A. No, there is nothing but the friction of the cases that holds the two sides together.

Q. How many hex keys are included in the set?

Q. Other than automotive, which application uses more hex-head hardware?

A. Electronics is where you’ll find more hex-head screws and bolts.

The Drive's Gear section is our brand-new baby, and we want it to grow. In the interest of clarity, we want you, our dear readers, to know that the products we get in arrive from a variety of sources, including those we purchased ourselves and those we receive from manufacturers. No matter the source, we maintain our editorial independence and will always give you our honest assessment of any product we test.

We’re here to be expert guides in everything “how to” and product-related. Use us, compliment us, yell at us. Comment below, and let’s talk, y’all. You can also shout at us on Twitter or Instagram. You can also reach us at guidesandgear@thedrive.com.