Floating a Century-Old House Across the Water Works, But Only Just

Moving a home is hard enough on land, but on the water there’s so much more to go wrong. 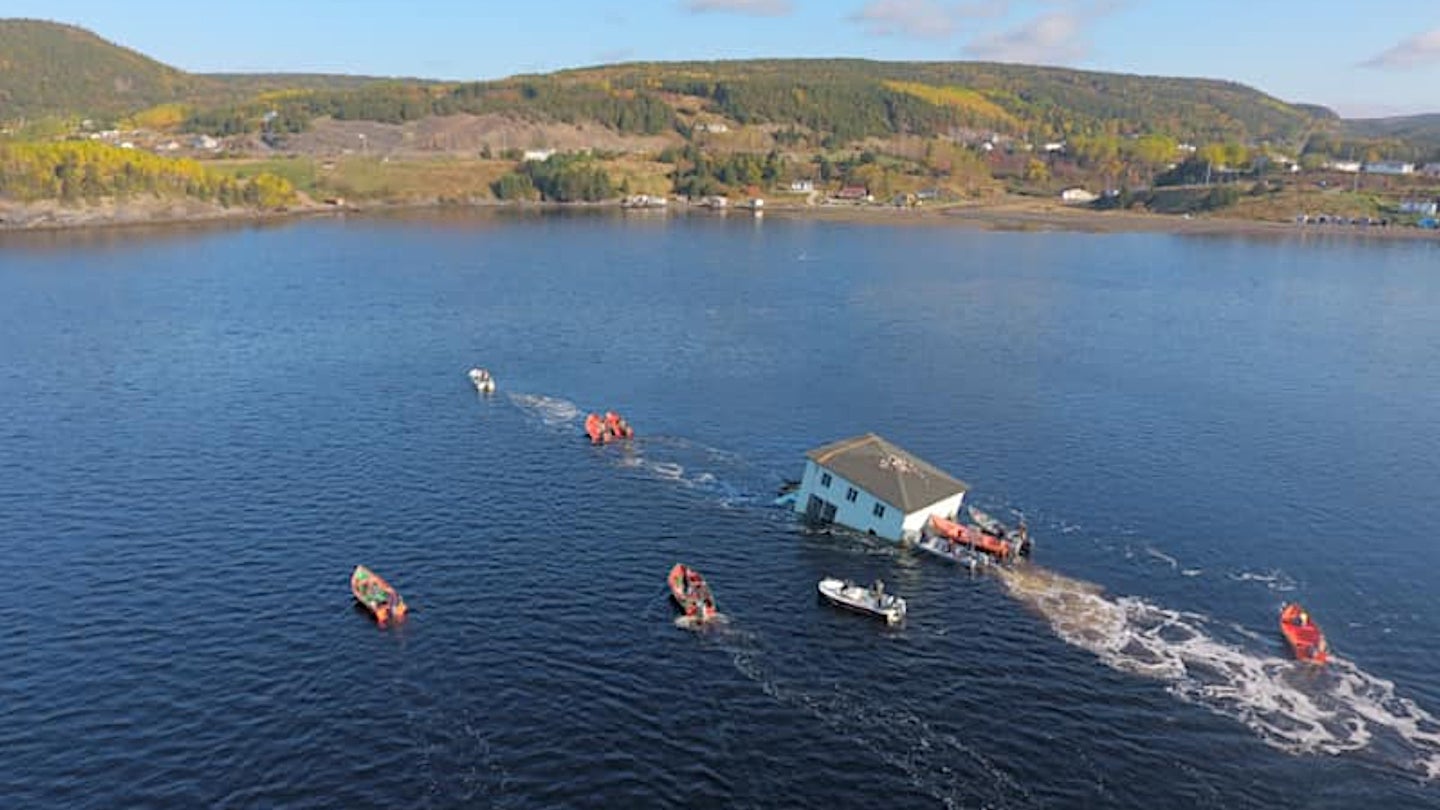 Moving house is simple enough; you box up all your possessions, put them in a truck, and unload them at the other end. Moving a house is another thing entirely, involving jacks and trailers and all sorts of kerfuffle. For Daniele Penney and Kirk Lovell, however, that wasn't hard enough. They decided they'd float a house on water to get it where it needed to be, and nearly lost the home in the process.

The story is that Penney had long coveted a green biscuit box house on Wharf Road in McIvers, Newfoundland. Despite keeping an eye on the place for years, Penney wasn't able to purchase the house when it last came up for sale. However, when she learned that the home was to be demolished by its new owners, she approached them about purchasing the building itself to move to her own land roughly a kilometer down the coast. The owners agreed, and the game was on.

The problem was that the over 100-year-old home couldn't readily be moved overland, due to overhead powerlines in the community. Instead, Penney along with partner Lovell decided they'd float the house down the waters of the Bay of Islands. A frame was built with wheels underneath, and over a week, the house was jacked up and installed upon it. Buoyancy was then provided with the addition of some Styrofoam insulation and 28 plastic barrels.

The house was pushed gingerly into the water, with Lovell intending to complete the move with three dory boats to push and pull it to its destination. Disaster was soon to strike, however, when Lovell's dory broke down. Without forward momentum, the house quickly took on water and began to sink. Talking to Saltwire, Penney noted the stress of the situation, saying "I don't know what was more devastating, watching this house go down in front of our eyes, or Kirk paddling in his dory so helpless."

However, salvation was at hand. Lovell made it to shore and jumped in another dory, and was joined by community members who all pitched in to help. Before long there was a flurry of activity in the bay, as a fleet of tiny boats joined in to shift the beleaguered building. With the extra boats huffing and puffing to move the house, things quickly got going again. “When we got her moving, it was awesome,” said Lovell.

Once landed, an excavator was given the job of hauling the house off the banks. One wasn't enough, but with a second excavator called in, the home was finally dragged to its new position looking out over the water. According to Keith Goodyear, who documented the process, despite the sinking, water damage was indeed minimal. "The home was basically stripped to its studs before being moved," said Goodyear, noting that there was no insulation or plasterboard to soak up water. The home was dried out with blowers and a wood stove, and reportedly has no issues with rot or mold.

Overall, it's a dramatic and impressive way to move a building, with the story all the more exciting for the near-sinking along the way. As always, it pays to live in a supportive community like Newfoundland, especially one that's equipped with boats to save your residence from drowning.

How To Spot Water Damage on a Flooded Used Car