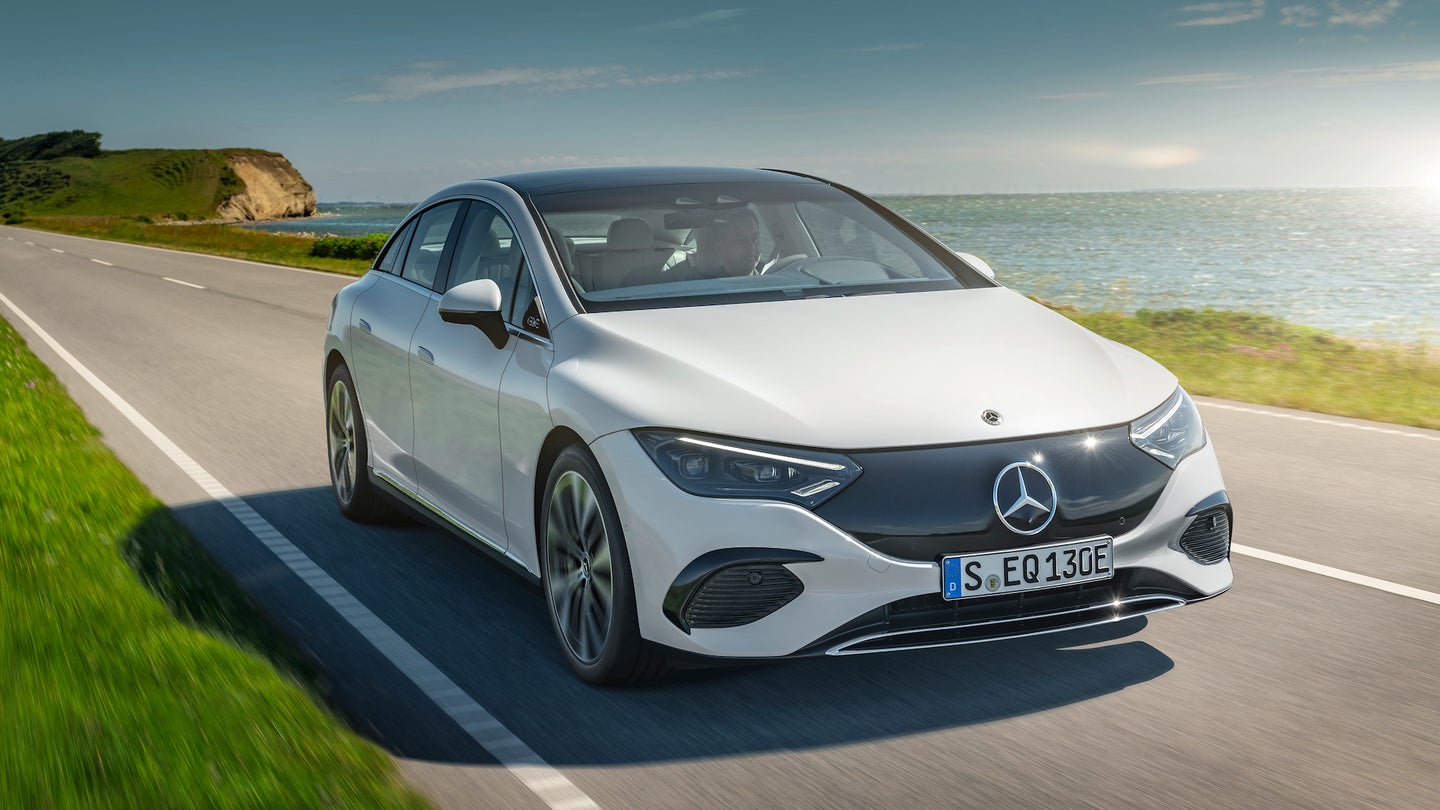 With the company pledging to go all-electric before the decade is out, we always knew there would be more electric Mercedes sedans joining the EQS. Here's a new one: the 2023 Mercedes-Benz EQE. As those familiar with Mercedes nomenclature will have already worked out, it's essentially a smaller, less fancy EQS, working with a wheelbase that's precisely 3.5 inches shorter. Mercedes also says its overall size is comparable to the CLS while its interior is more expansive than that of the current E-Class.

At launch, Merc's mid-tier e-sedan will come as a 288-horsepower EQE 350 and one other, unnamed model with "further versions" will follow. The EQE 350 will be good for 391 pound-feet of torque. Frustratingly, Mercedes has not announced the all-important range figure for this car but it does say it will come with a 90-kilowatt-hour lithium-ion battery with internally developed management software that can be updated over the air. For perspective, the EQS uses a 107.8-kWh pack and is claiming 478 miles of range.

DC fast charge support up to 170 kW is confirmed and Benz says the EQE will be able to go from 10 to 80 percent charge in 32 minutes. Charging on Merc's public network will apparently be plug-and-play, no fiddling with credit cards or some janky third-party mobile app required; set your preferred payment method once and that's that.

No concrete performance figures have been released either but Merc is aiming for consistent high performance, specifically "multiple accelerations without a drop in power." As for more pragmatic driving considerations, the EQE is capable of one-pedal driving and energy recuperation under deceleration, much like most other EVs.

Unlike every other EV, however, the EQE will optionally feature the massive Hyperscreen dash first seen in its EQS big brother. If you're unfamiliar, it essentially turns the entire dashboard into seemingly one big display (in reality, it's multiple displays slickly integrated together under one piece of glass). Speaking of options, Burmester audio-equipped EQEs will inherit the EQS's soundscape "engine audio" themes: Silver Waves, Vivid Flux, and Roaring Pulse. Other optional extras available for the EQE will include air suspension with adaptive damping as well as rear-axle steering which allows the back wheels to steer up to 10 degrees and cuts the car's turning circle from 41 to 35 feet.

It's unclear whether the rear-wheel steer is indeed an optional extra in the traditional sense or something that comes with every EQE but is merely locked behind software. Judging by how much the EQE resembles the EQS, however, we're inclined to assume it'll be the latter.

Expect to see the EQE at U.S. dealerships sometime in 2022.

Got a tip or question for the author about the EQE? You can reach them here: chris.tsui@thedrive.com

The fast four-door pairs a hybrid system with a twin-turbo V8.

New Mercedes Cars Can Warn You About Potholes