It all boils down to the state's strict sound regulations. 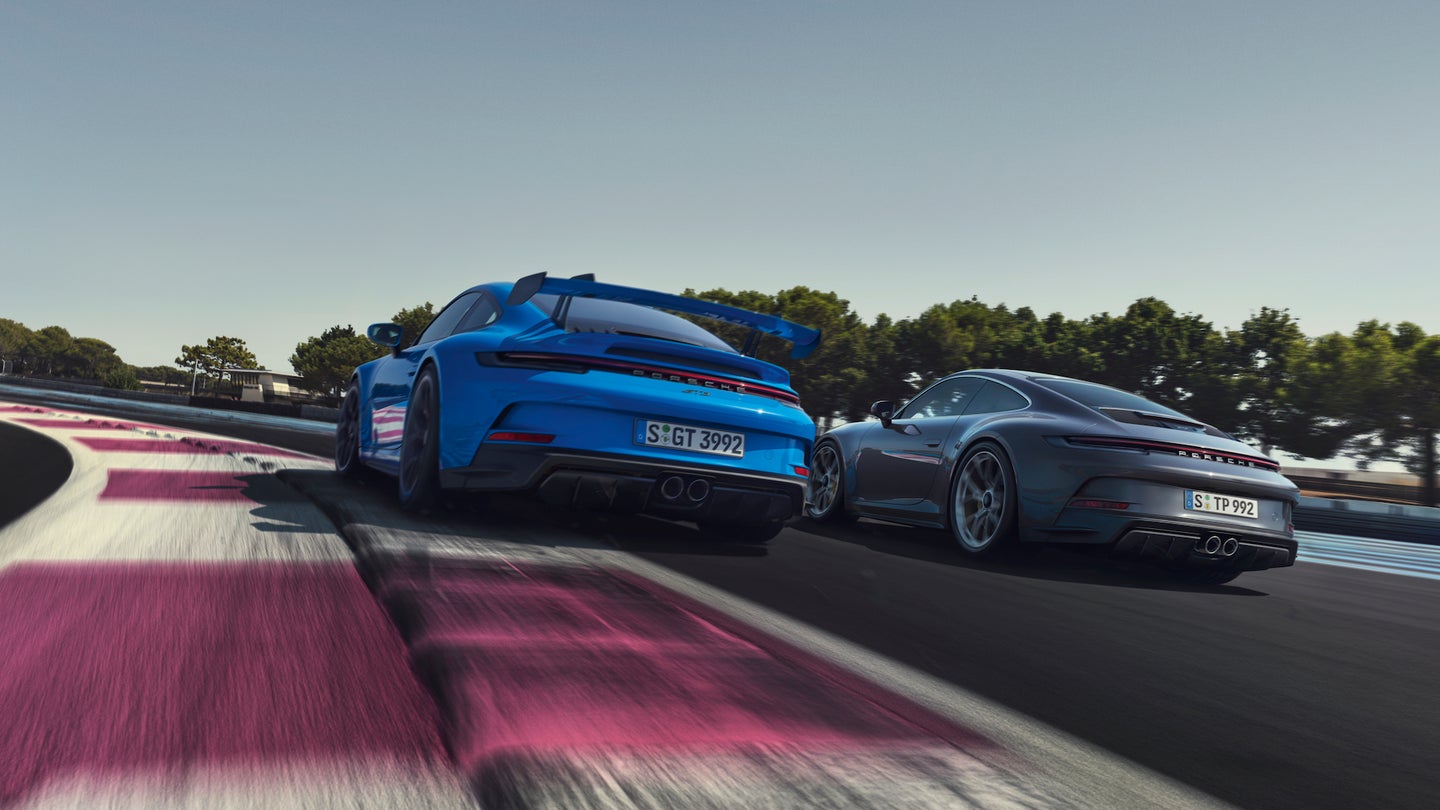 If you're a Porschephile on the sunny West Coast, we've got good news and we've got bad news. The good news is that there's a new Porsche 911 GT3 Touring that can be had with the automatic PDK transmission—a decision Porsche says was made to satisfy customer demand. The bad news? PDK will be the only transmission choice for both it and the regular GT3 in the state of California. Outside of California, buyers will still have the option of a six-speed manual or the PDK for both cars. Ironically, the previous-generation GT3 Touring was a manual-only affair. That faint tapping sound you hear is every Angeles Crest 911 Blowhard furiously Googling "closest porsche dealer Nevada."

Interestingly, it all has to do with a California sound regulation that the manual GT3 apparently breaches but the automatic does not. When we asked why and how the manual car is presumably louder than its PDK counterpart, a Porsche spokesperson told The Drive that even he is not yet sure if the issue indeed lies with a manual transmission GT3 that's actually louder or whether this happened because the regulations are different for manuals versus automatics. He also noted that the California ban on the manual GT3 is a relatively recent development and that the sound regulation in question is currently being updated, a process the company hopes will be completed soon. Not surprising at all when you remember 70 percent of previous-gen GT3 buyers in the U.S. opted for the three pedals.

In any case, here's the automaker's official statement on the matter:

"We are looking forward to, and have been preparing for, the U.S. arrival of the new 911 GT3, which now includes the Touring Package. Ahead of any new model arriving in our market, we verify which options we can offer in each state, and may adjust the range of options accordingly. As a result of this process, the PDK gearbox will be the only transmission offered for sale in California in the 911 GT3. For those who prefer three pedals and are located outside of California, a six-speed manual gearbox will continue to be available at no extra cost. First deliveries in the U.S. of the new 911 GT3 begin in the fall with the Touring package-equipped cars arriving in early 2022.

We strive to offer as much choice as possible to meet and, we hope, exceed the expectations of our customers – and this extends to even our most focused model, the 911 GT3, which offers a greater range of personalization options than ever before. At the same time we have to fully accept and respect national and local guidelines in every market – not just in the U.S. but around the world. Unfortunately, this precludes a manual gearbox option on the 911 GT3 in the state of California because of a sound regulation that is in the process of being updated. We had anticipated an updated regulation at time of launch, but this process is not yet complete. The seven-speed PDK option has received full certification. The manual gearbox will continue to be offered in every state outside of California.

We are unable to confirm if a manual gearbox for the 911 GT3 will be offered in California in the future, however the manual transmission will not be offered on the 2022 model year car." 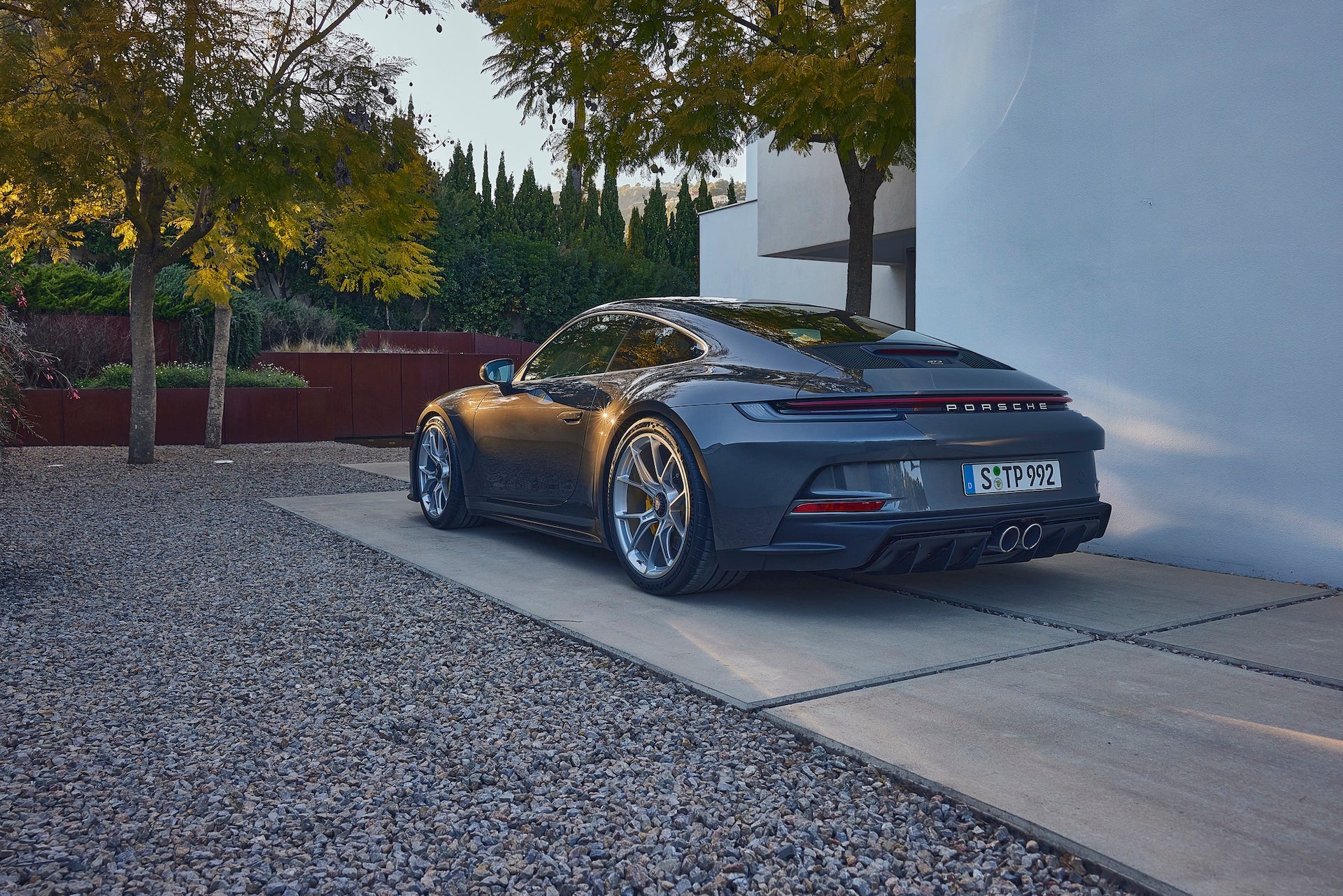 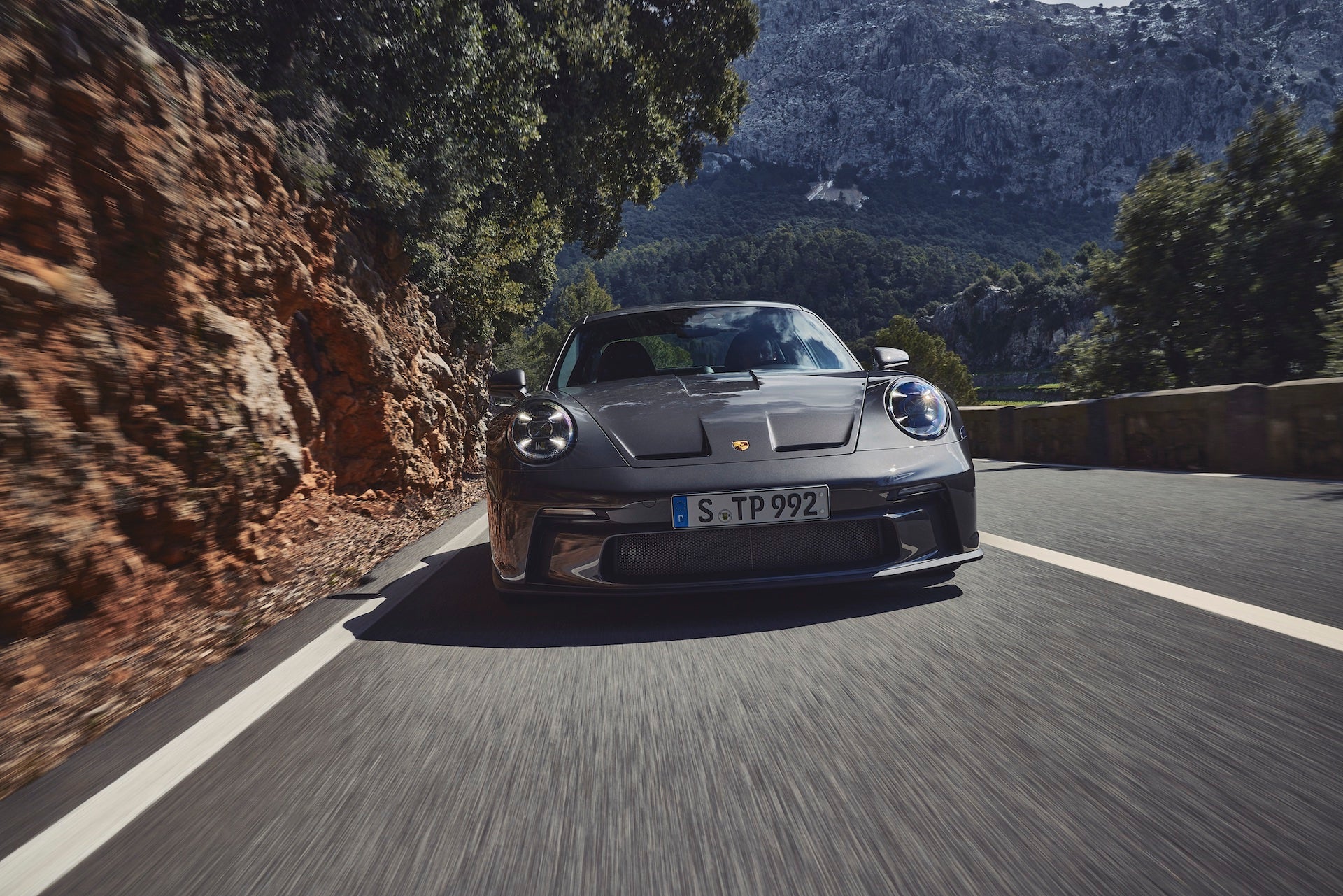 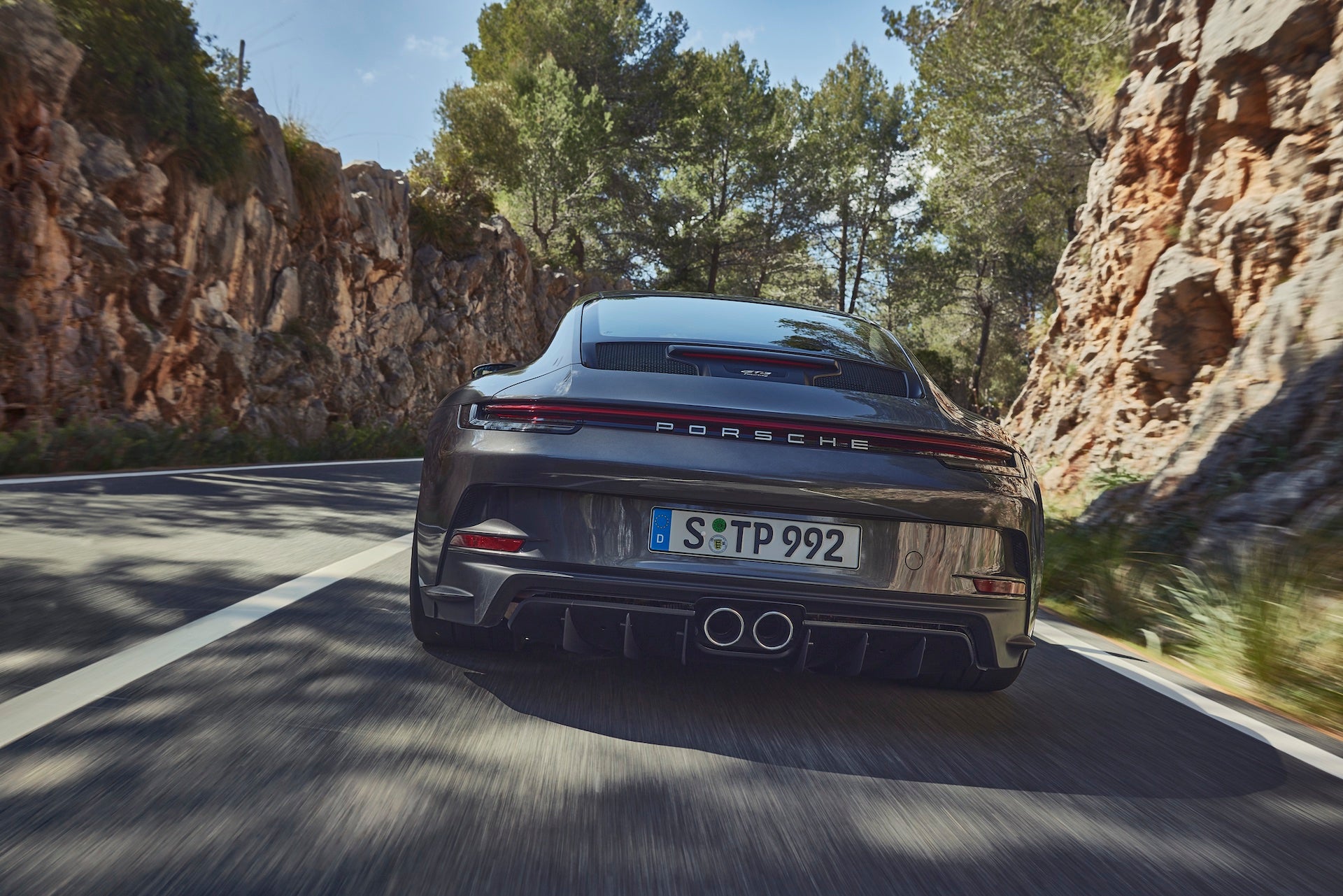 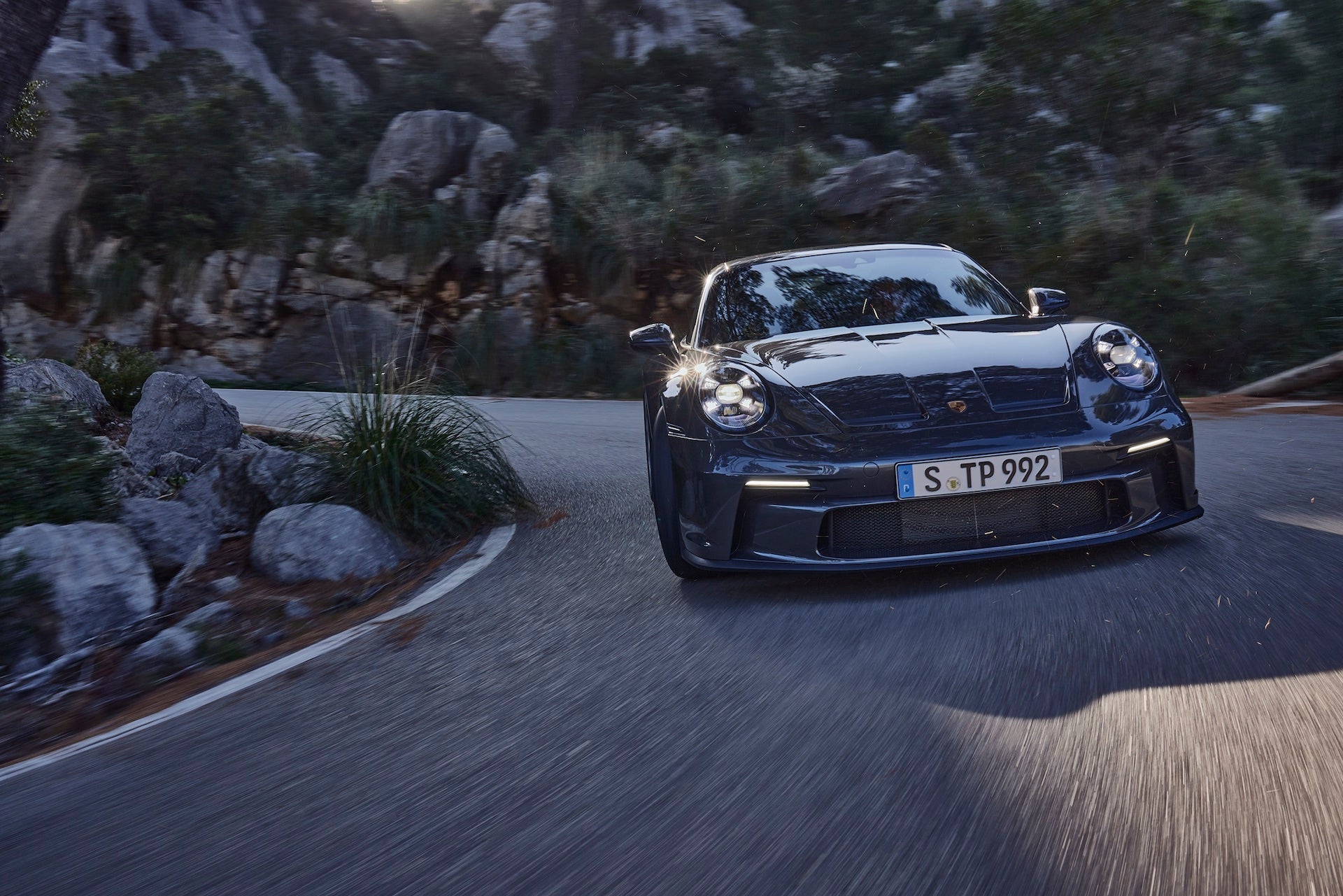 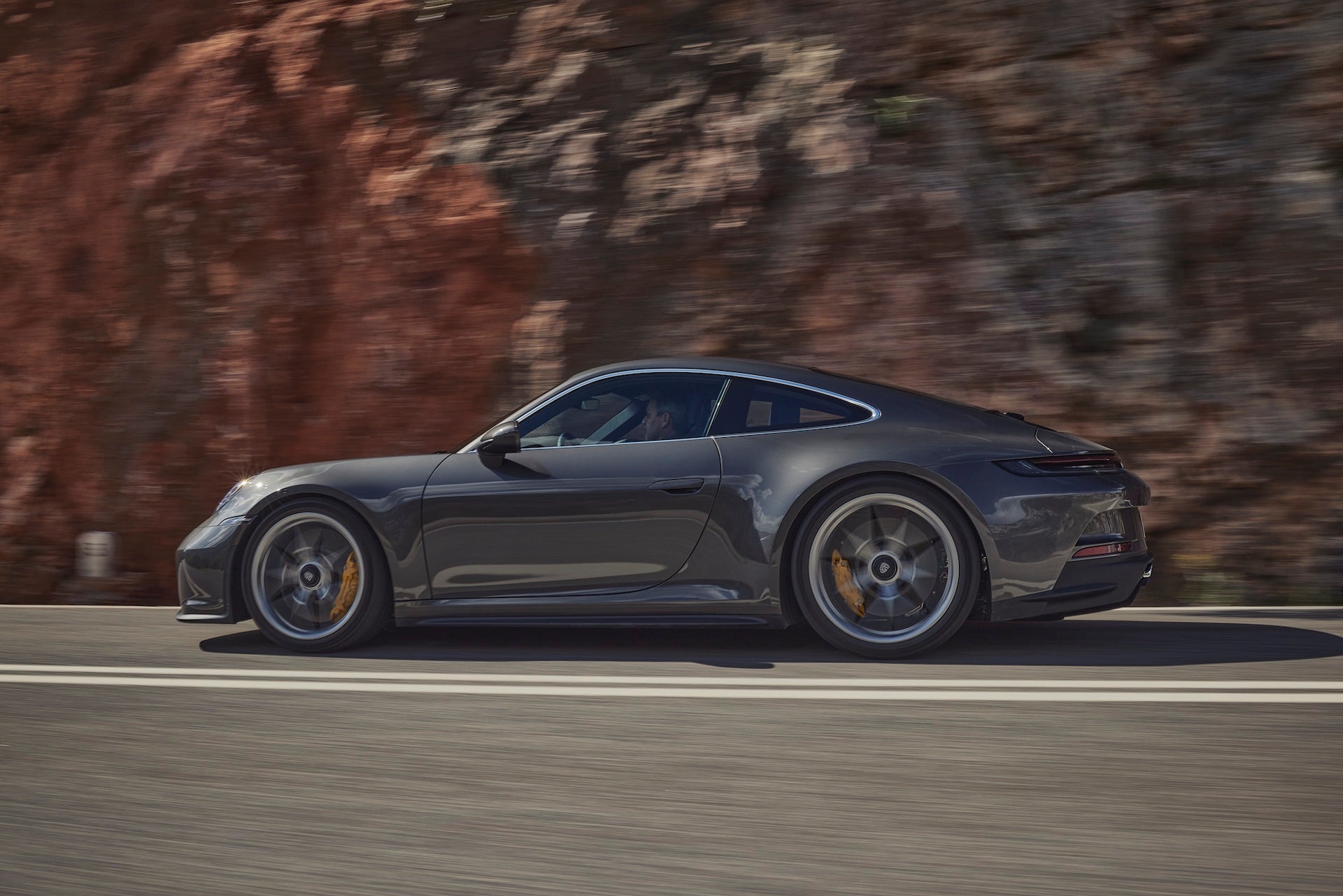 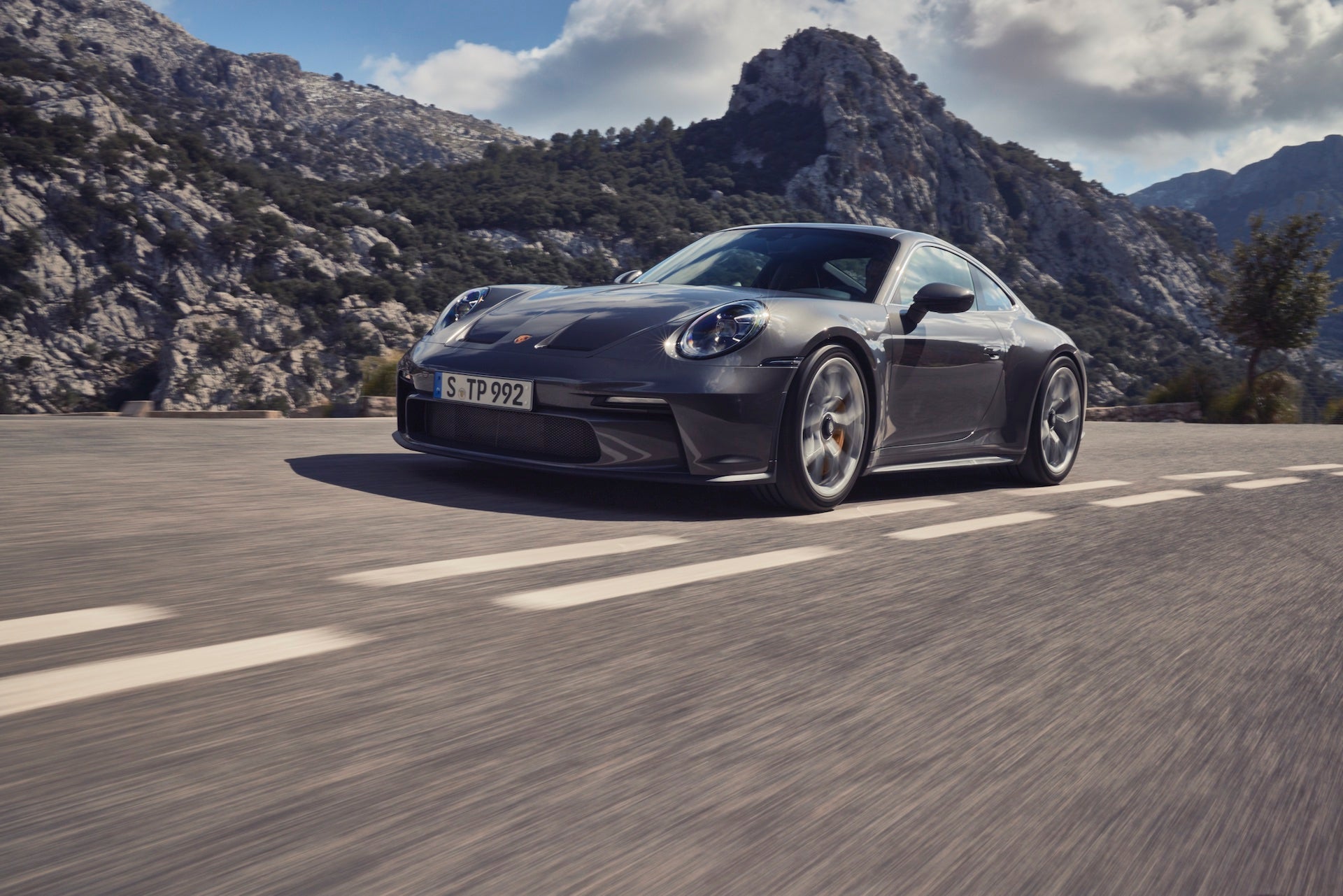 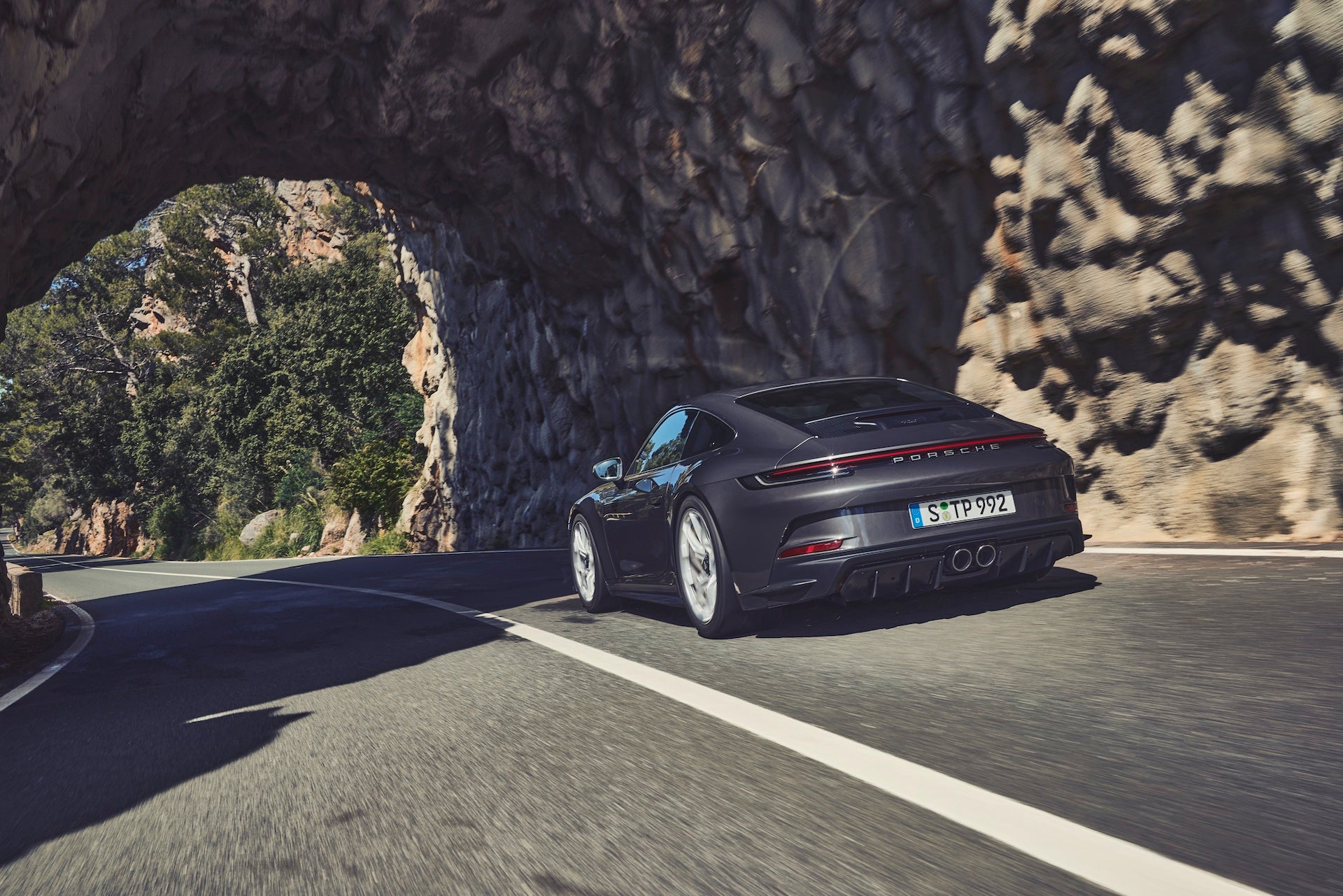 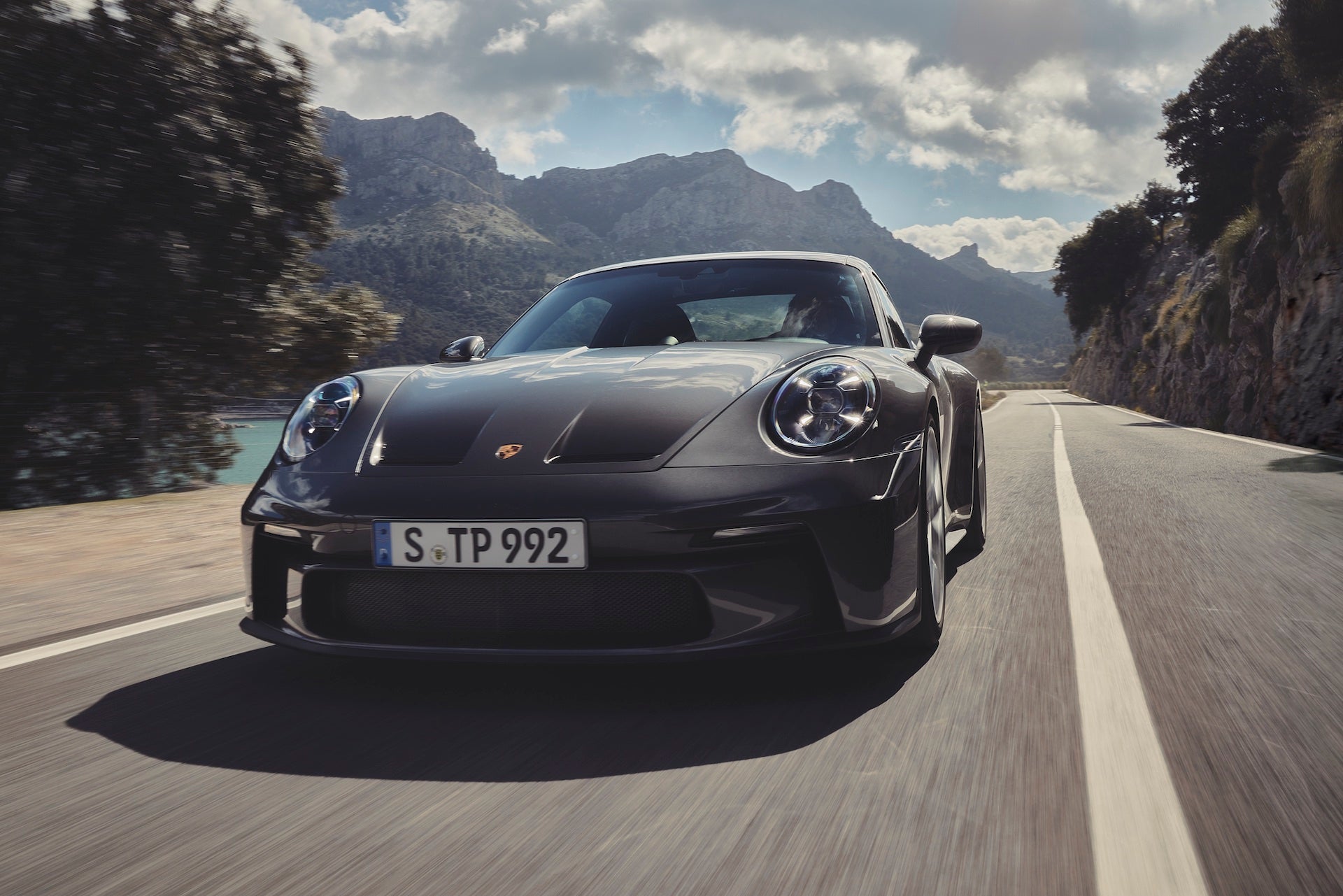 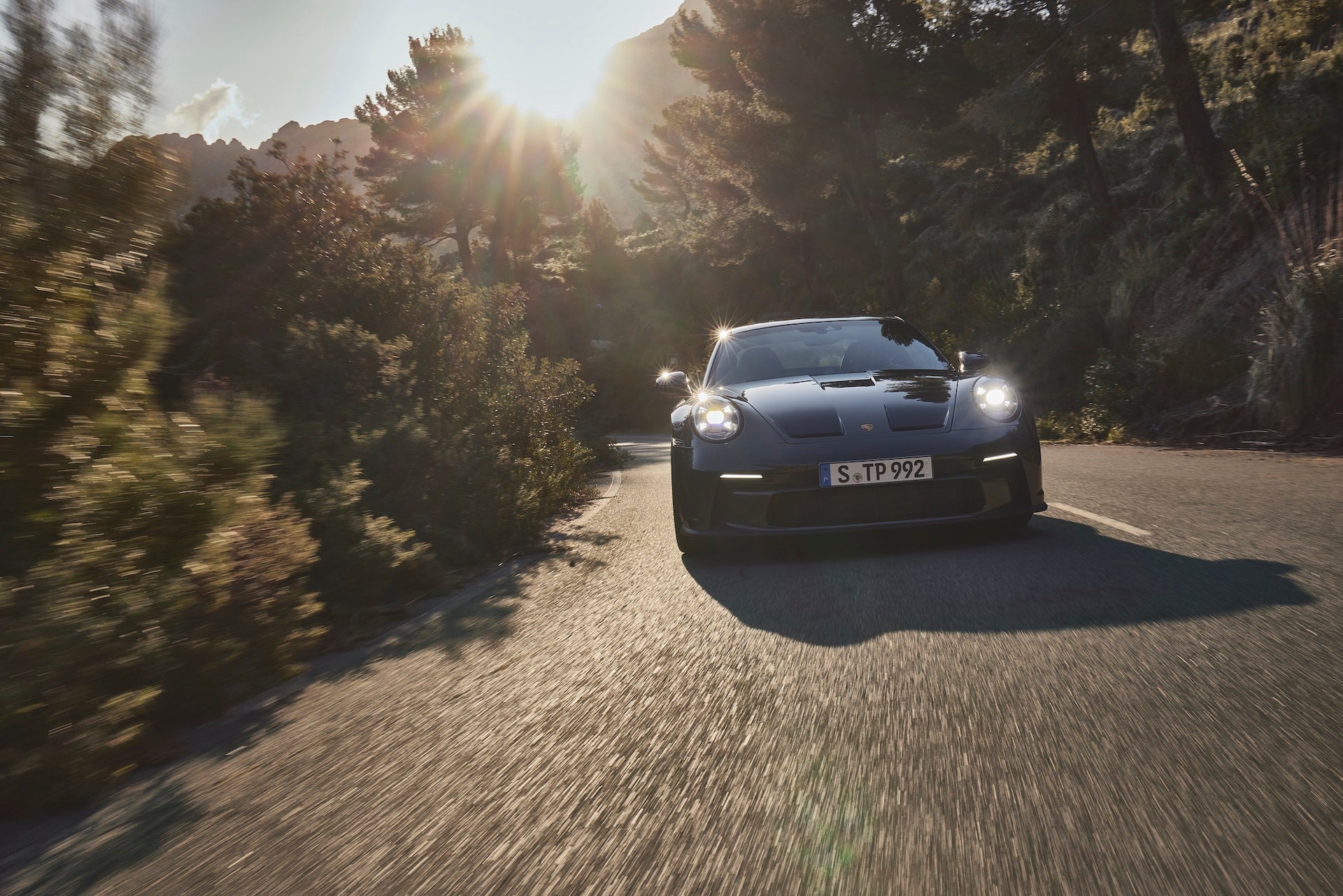 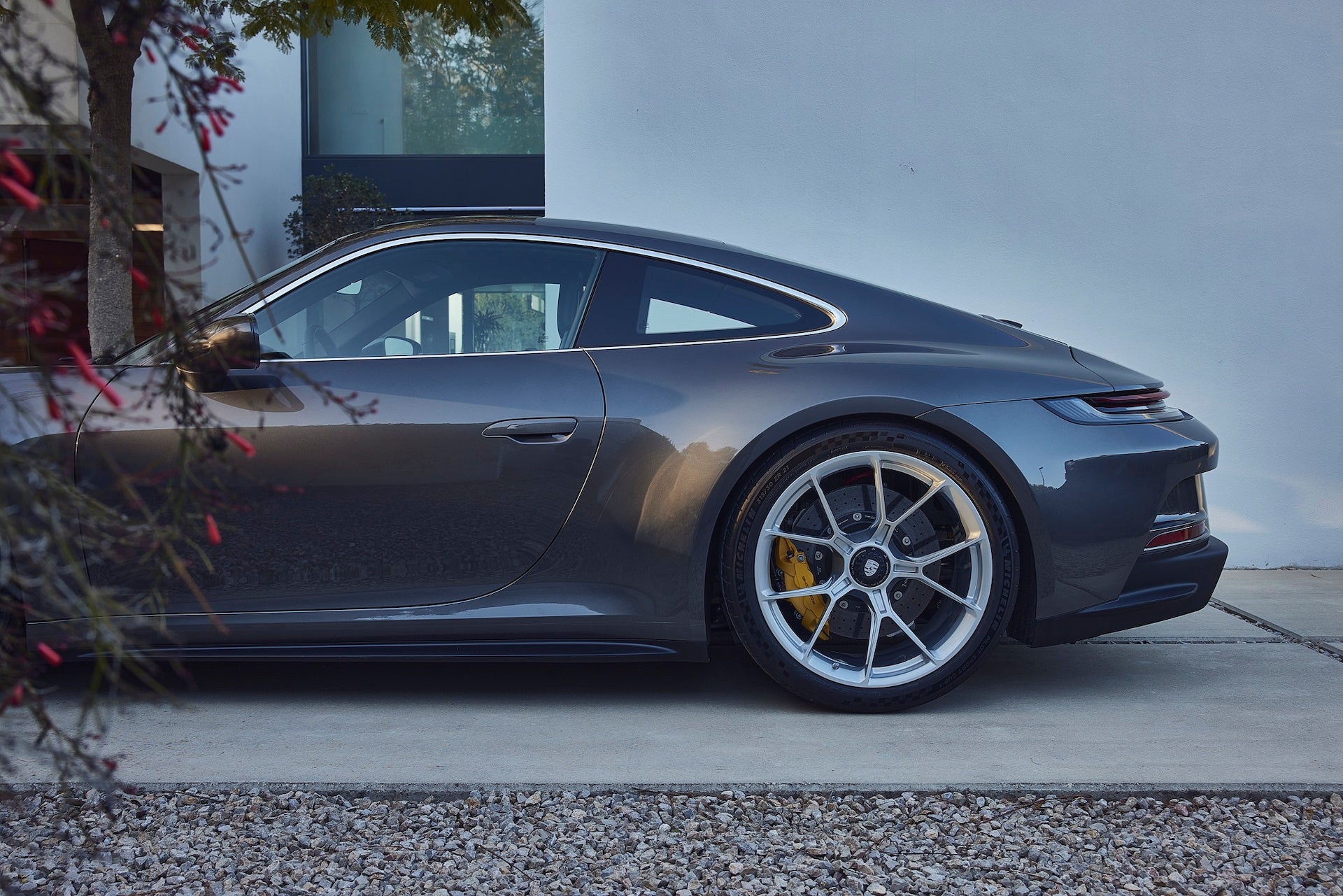 No matter which gearbox you choose (or don't choose) to spec it with, the new Touring holds the same premise as the last one. All of the running gear of a 911 GT3 without the big wing, for those who want the performance of Porsche's track-ready 911 with more subdued visuals. It's billed as a no-cost option on the GT3 that replaces the bar table wing with a much smaller spoiler that automatically extends at high speeds.

The Touring pack also comes with a different grille and anodized aluminum side window trim. Then, it swaps the black grille surround on the regular GT3 for a body-colored version instead. Inside, there's a more generous use of leather while the dash and tops of the door cards feature special surface embossing.

The 2022 Porsche 911 GT3 Touring will start at $162,450 and is expected to hit the roads early 2022. Both the Touring pack and the manual transmission (in states that still offer it, of course) are both no-cost options. It'll have the same 502-horsepower flat-six as the non-Touring version, of course, which also makes 346 pound-feet of torque...and lots of noise. 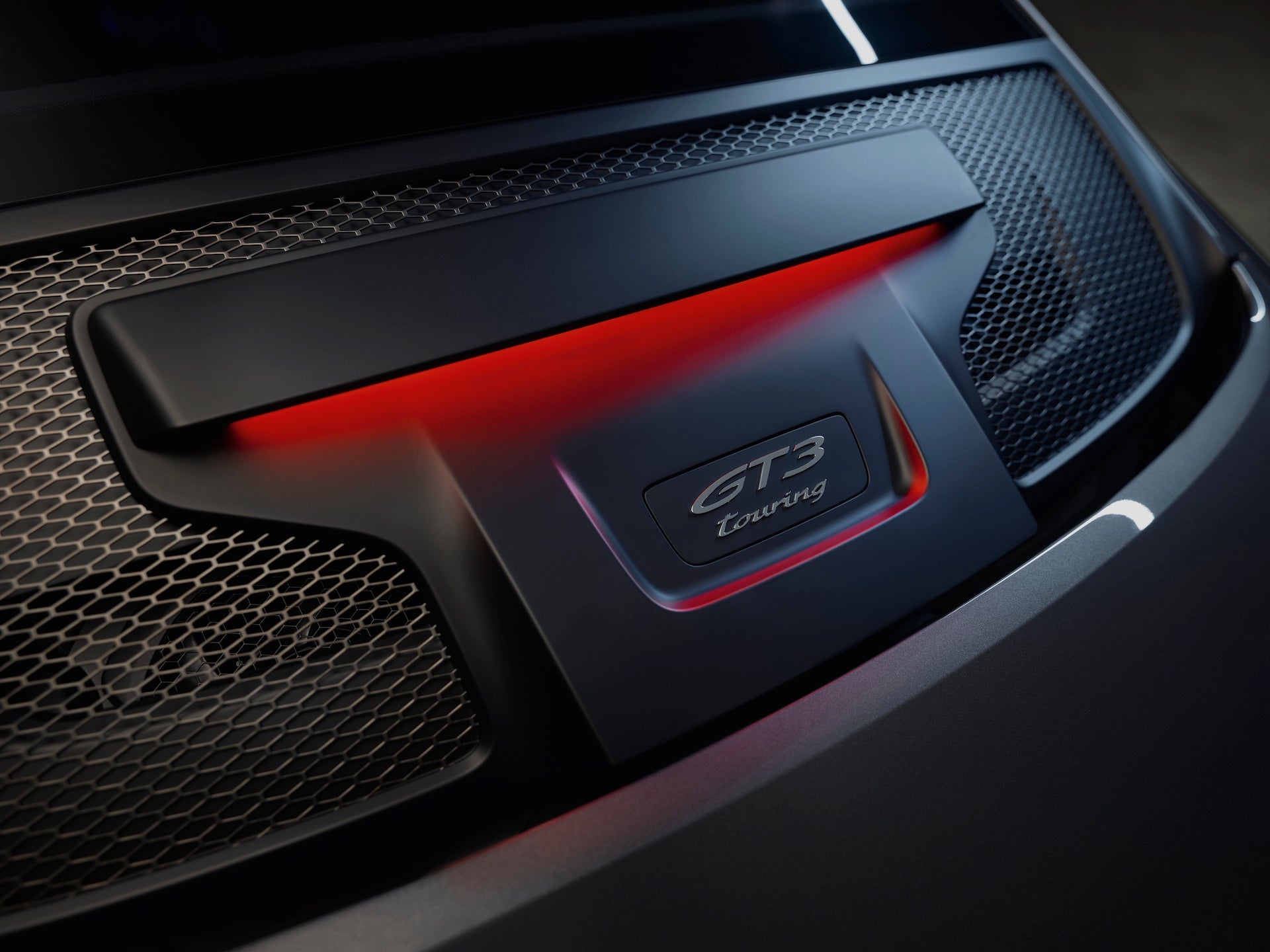 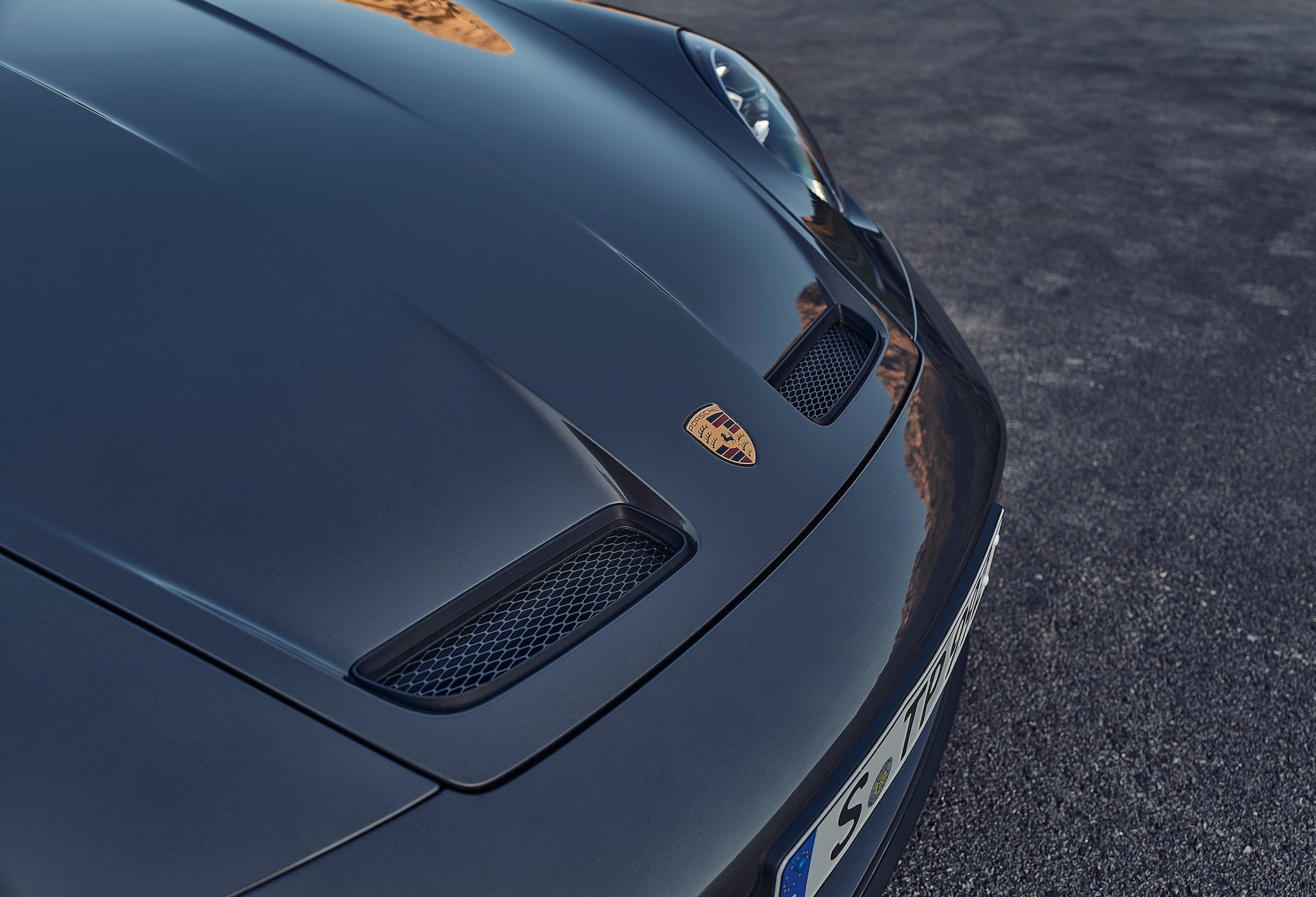 Got a tip or question for the author about the Porsche 911 GT3 Touring? You can reach them here: chris.tsui@thedrive.com