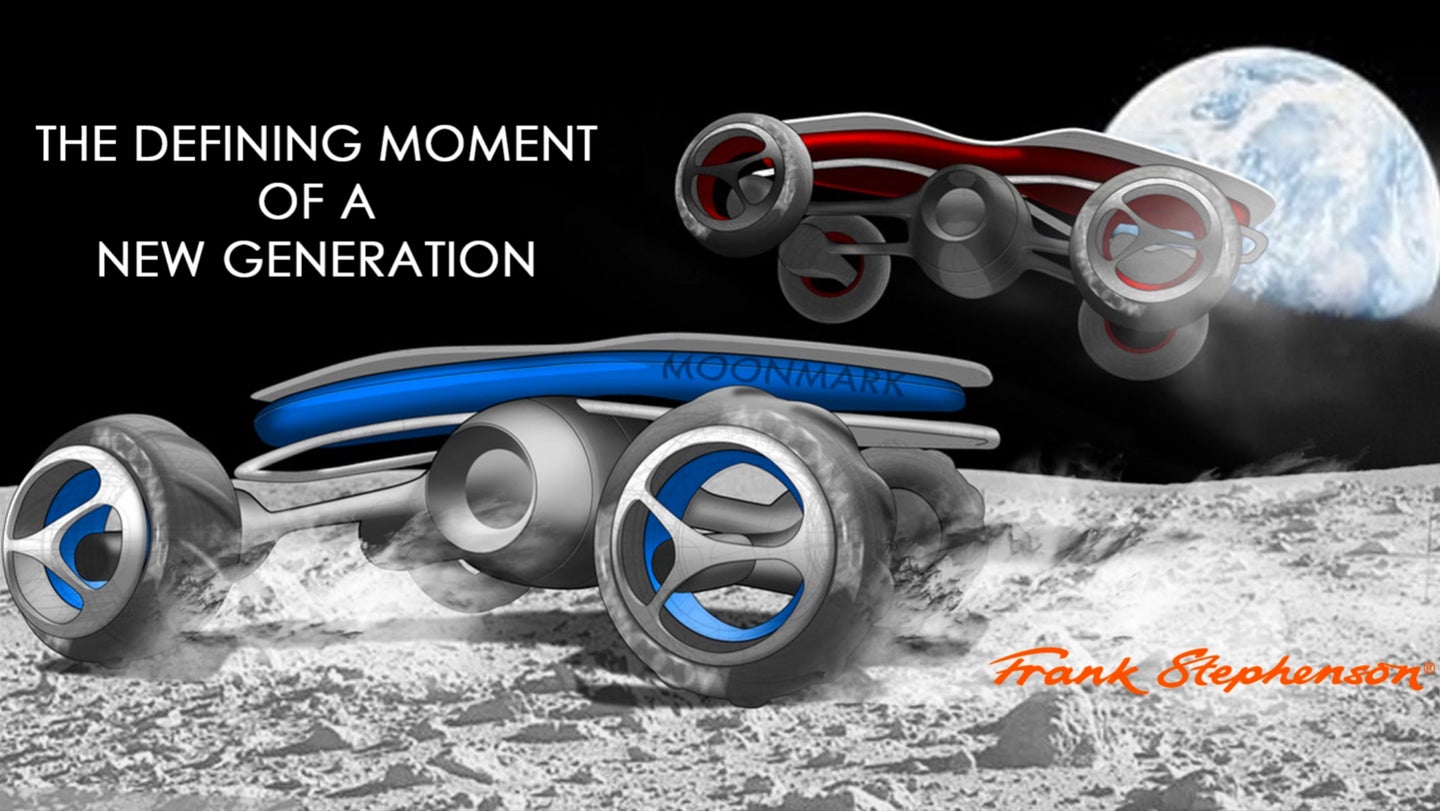 Life on earth sucks right now, so why not go racing on the moon? That's the goal of Moon Mark, which plans to let two teams of high school students design, build and race cars on the lunar surface. The students will stay on earth and race the cars head-to-head with each other remotely. Here's hoping someone sends a pick-up rover if these teams decide that rubbin's racin'!

Moon Mark describes itself as "a multi-media entertainment and education content company" in its announcement of the competition, but it also attracted some big talent from the car world for this pie-in-the-sky endeavor. Automotive designer and YouTube design critic Frank Stephenson, known for cars like the reborn-under-BMW Mini Cooper, McLaren P1 and Ferrari F430, will assist the teams with the design of their cars. The track itself will be designed by Hermann Tilke, who is known for designing many of the newer F1 tracks around the world. Coaching guru Ross Bentley is also signed on as Moon Mark's Race Adviser.

Student teams from around the world will compete for one of two moon-racing spots in qualifying rounds here on Earth. Then Stephenson will help them refine their designs into functional remote-control moon-racing cars. The cars' internal workings have already been designed by Lunar Outpost, so it's up to the teens to work out the rest.

The finished cars will then be loaded up onto a SpaceX Falcon 9 and carried to the surface aboard Intuitive Machines' Nova-C lunar lander. That launch is currently scheduled for October 2021, per New Atlas. The Nova-C will send signals to and from Earth, and a WiFi signal between the cars and the Nova-C will send and receive telemetry and commands. The race itself will be live-streamed back down to earth through a sphere of cameras around the track.

Intuitive Machines is set to be the first private aerospace company to land on the moon, and has partnered with Moon Mark on this event. Everything about this is no doubt very expensive, but anything education-related is no doubt excellent PR for the private space companies and personalities involved. New Atlas ran the numbers on how pricey this drop-off will be, and whoa:

"Each car will weigh 2.5 kg (5.5 lb), and the "deployment mechanism" used to deposit them on the lunar surface will weigh a further 3 kg (6.6 lb). This 8 kg (17.6 lb) combined weight is a big deal, because it's going to the Moon. That's somewhat of a special delivery, and not a cheap one. Lunar logistics company Astrobotic, for example, is currently quoting prices of US $1.2 million per kilogram (around US $544,000 per pound) to plonk things down in one of its Peregrine lander modules."

If Intuitive Machines wanted to sell that 8 kg worth of payload to someone, the whole shebang would work out to about $9.6 million at Astrobotic's rates. Mind you, while Intuitive Machines works with some heavy hitters like the Department of Defense, NASA and SpaceX, that's a big cost to eat as a company that's only been around since 2013. The Nova-C holds just 100 kg worth of payload, meaning that Moon Mark's racing equipment will take up a full 8% of its initial haul.

The more concerning numbers are the ones related to the tech that would need to be used to make this happen. While Moon Mark CTO Todd Wallach told New Atlas that he doesn't expect there to be any kind of communications lag that would affect the race itself, the numbers seem iffy. New Atlas explains:

"I'm a little dicey on this one. If communications proceed between Earth and the Moon at the speed of light, which it's fair to say is pretty fast, they'll take about 1.3 seconds to cover the 384,000-odd kilometer (238,600 mile) gap. So unless there's some weird quantum entanglement business going on, the absolute best case scenario seems to be that when these kids push a thumbstick here on Earth, it'll take 1.3 seconds for the car to do something on the Moon, and 2.6 seconds before anything happens on the video feed they're watching."

The track could make this lag even more frustrating, as it won't be the usual Tilke jam with lots and lots of paved runoff, but rather, the natural rough surface of the moon itself. While Stephenson told New Atlas that the lunar surface was scanned enough that Tilke can devise some set route for the cars to use, dodging obstacles with a 2.6-plus-second delay seems frustrating at best. No specifics have been given on the cars' speeds just yet, so perhaps they could be slow enough that the lag won't be too much of a problem. However, Moon Mark claims that they will be fast.

Despite all of this, Stephenson seems pretty excited about the challenges of designing these cars, telling New Atlas:

"There's a lot of things they have to consider. Obviously it's not downforce! It's more about, say, dust filtration, traction, weight, materials, endurance, stability ... Then there's center of gravity, and protection – if these things flip over at speed, you have to make sure none of the parts are damaged. You have to be able to upright it in some way. But everything you do to these things adds weight, everything you do to correct something else is another part added. So there's got to be an incredible simplicity to the design, and incredible reliability. There's a pretty big team working on it, a huge engineering team and there's some huge names attached that will be announced in early 2021."

Stephenson is also excited about building a lunar vehicle that doesn't look like the completely function-over-form rovers we're used to, noting that a cool design could help get younger generations interested in technology.

While we all know how much auto designers love to work on implausible things that will never exist, I want to believe. I want to see race cars on the moon. We need some damn frivolity, and while it's weird to see rare space aboard a moon lander used for something that isn't a vital necessity, here's at least hoping that moon landings can become frequent to the point where that's no big deal.