A video of the stunt has over eight million views on TikTok. It’s probably fair to say that, yeah, it worked. 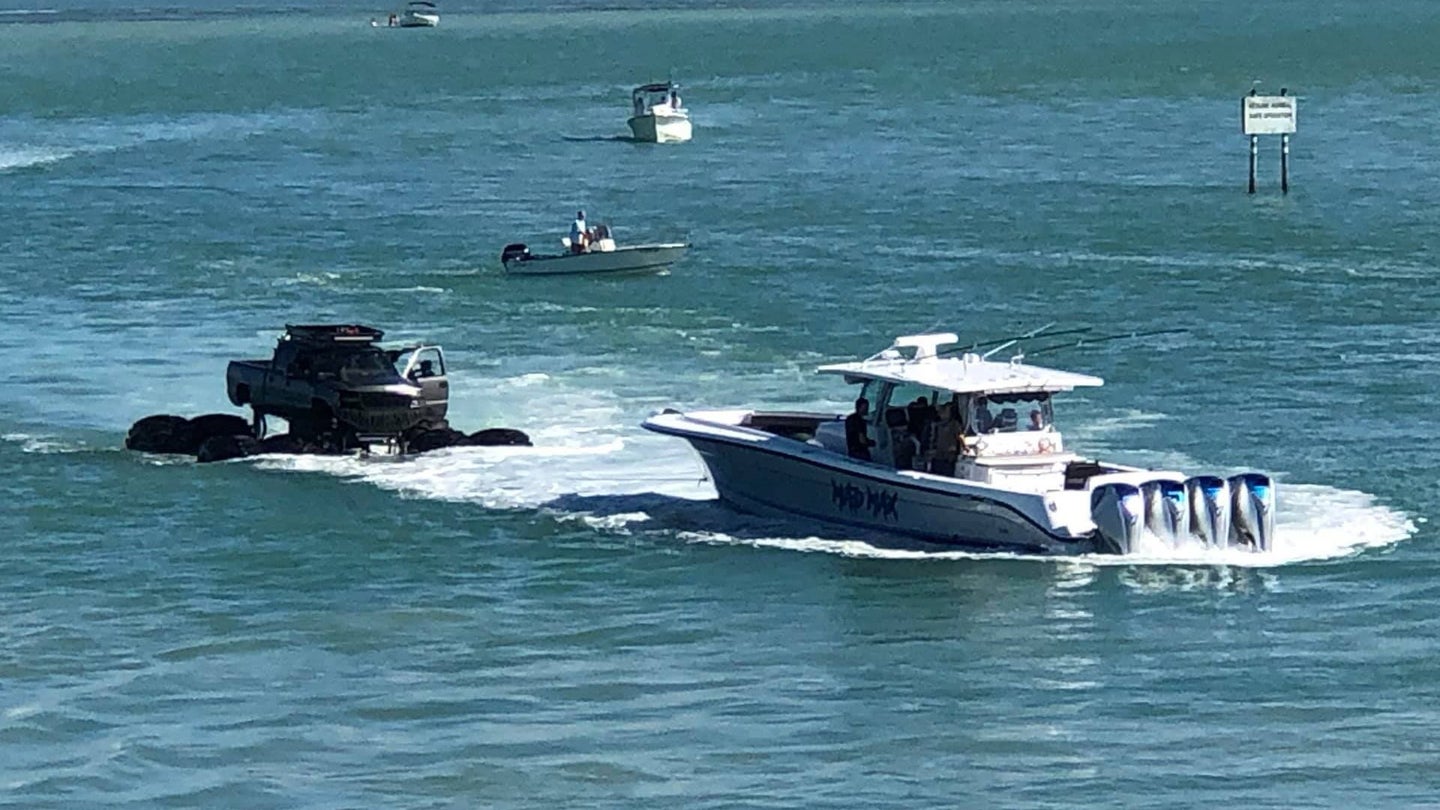 YouTuber WhistlinDiesel embodies truck culture in ways we're not quite interested in exploring. However, his latest stunt—like pretty much all of his others—makes you wonder, "Why?" Although a video of it hasn't been posted on his channel quite yet, a series of social media posts shows the internet personality drove a two-axle, eight-wheeled Chevy Silverado near the Gulf of Mexico between Longboat Key and Bradenton Beach, Florida.

Floating seemingly thanks to the immense amount of air in its tires, the truck made it into the water before local authorities arrived. No, it doesn't have a propeller—he just drove it into the water before getting pulled back by a boat, surrounded by the Coast Guard, sheriff's office and Department of Natural Resources, according to an Instagram post. It's hard to imagine the DNR is too happy about a diesel truck driving in a protected body of water, but hey.

A helicopter was even flown out for the stunt and the man behind WhistlinDiesel, Cody Detwiler, thanked @316.speed for bringing it out.

The whole thing took off when a post showing the truck was shared to Facebook, and there's also a TikTok video of the Chevy from multiple angles with over eight million views at the time of this blog.

Known as the "Monstermax," this Silverado is a Duramax diesel-powered truck with eight wheels taken from a piece of heavy machinery. There have been several iterations of the pickup before, but this is undoubtedly its most famous form. It even has four-wheel-steering like a real monster truck, but instead of showing off at stadiums, Detwiler normally thrashes it around his property in Indiana.

Although WhistlinDiesel hasn't posted a video of these underwater antics to YouTube yet, there is another video showing the truck in a man-made pond with "Atlantic Ocean Prep" mentioned in the title.

The Monstermax was originally sent to Florida for the 2.4 Hours of Le Mullets race hosted by Cleetus McFarland, AKA Garrett from 1320Video. Of course, the truck didn't race but Detwiler did, and he organized this stunt to make the most of his time.

Detwiler hasn't said whether he's in any trouble with the law or not, and the Bradenton Beach Police Department hasn't yet responded to our request for comment. He's been posting on Instagram as recently as Sunday, though, so he's seemingly in the clear...at least for now.

Correction: Tuesday, November 17th, 2020 @ 2:34 pm ET: A previous version of this story stated the truck was driven into the Atlantic Ocean, when in reality it was in the Gulf of Mexico. The Drive regrets the error.

What kind of person would destroy a $100,000 pickup truck just for views? A YouTuber.