Viral TikTok Star Asks Supercar Owners the Big Question: What Do You Do for a Living?

Some of the answers will surprise you. Or will they? 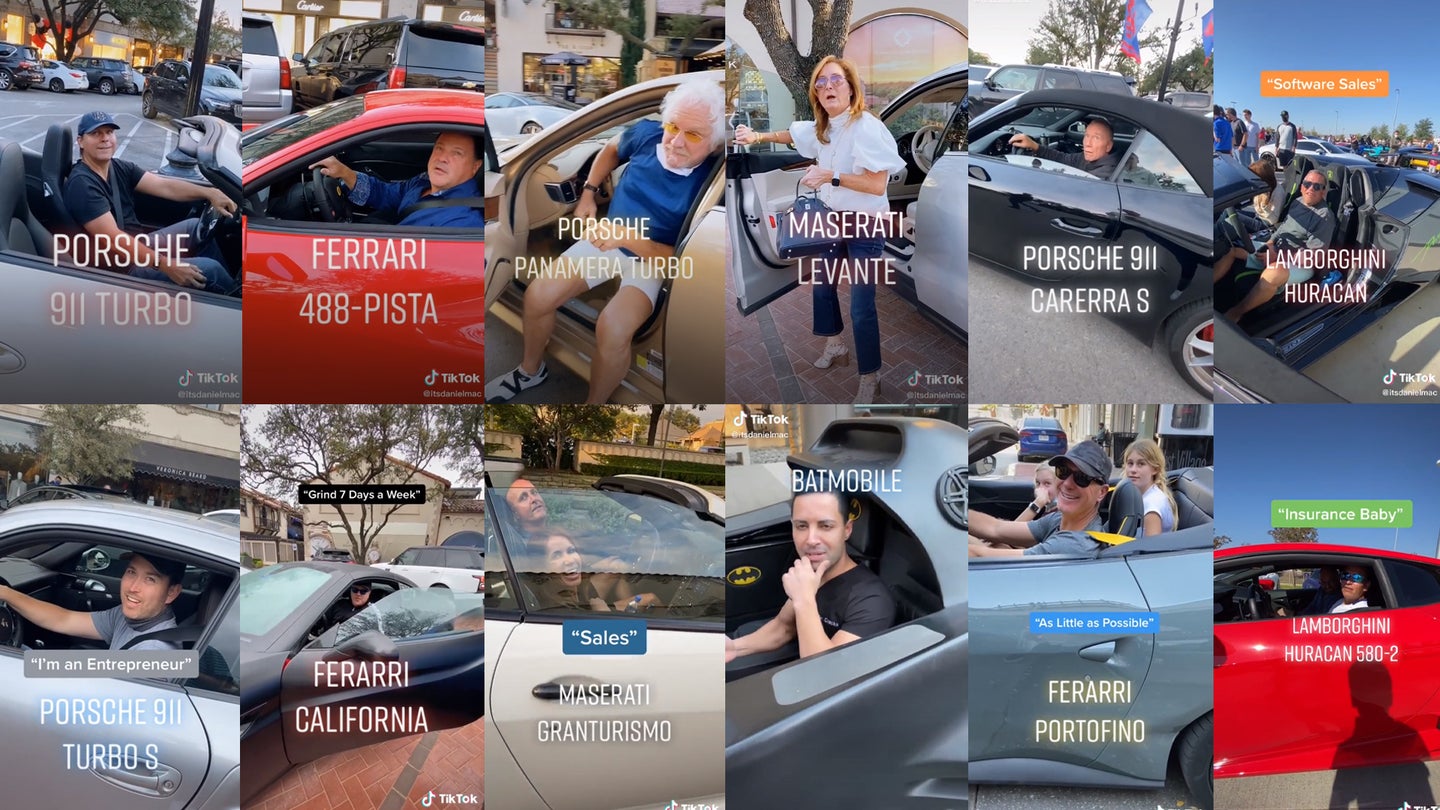 There's a new viral sensation making the rounds on Car Internet, and it's genuinely fun. TikToker Daniel Macdonald has been going around Dallas, Texas, asking owners of exotic cars one simple question: "What do you do for a living?"

The responses he's gotten have been interesting, to say the least. The majority of people say their wealth comes from real estate, though many others were software developers, doctors, surgeons, investment brokers, or worked in sales. Of course, some people get creative with their answers by saying they're drug dealers or bank robbers, and there is also a fair share of just "entrepreneurs." Of course, many of the older folks shown on camera simply say that they're retired.

What's even more surprising is that this pop-up internet celebrity has seen more supercars in a matter of weeks than I have in years. In just a handful of videos, Macdonald showcases an Audi R8, Bugatti Chiron, Ferrari 488 Pista, McLaren 600LT and Porsche 911 GT3, as well as several Mercedes G-Wagens, Maseratis, and Bentleys.

The 23-year-old vlogger started the experiment earlier this fall after seeing several high-end cars roaming the streets of the affluent Highland Park area. He told D Magazine that he posed the question to one Lamborghini driver on a whim and the video went viral overnight. He quickly grew from just 10 followers on TikTok to well over 2.2 million.

The videos have become so popular that many of the supercar owners have started to recognize Macdonald as he approaches them. He says that the majority, around 90 percent of people, respond positively to the question. Some have given him gifts like a new camera and a Gucci Backpack, while others have given him business cards or invitations to Christmas parties because of his "entrepreneurial spirit," which also inspired a line of clothing featuring his well-known catchphrase.

Macdonald says when he first started the experiment he was just a casual automotive observer who could point out a manufacturer but needed help from friends to pick out the exact models. Since the videos first took off, he's fallen down the inevitable car rabbit hole. In case you were wondering, his dream ride is now a Ferrari 488.

In the future, the social media star says he plans to do mansion tours in Highland Park, but until then, we'll stay tuned to learn what else these supercar-owning millionaires do to earn their keep.