"This isn't what anyone wanted," a Honda rep told us as the automaker attempts to set the record straight. 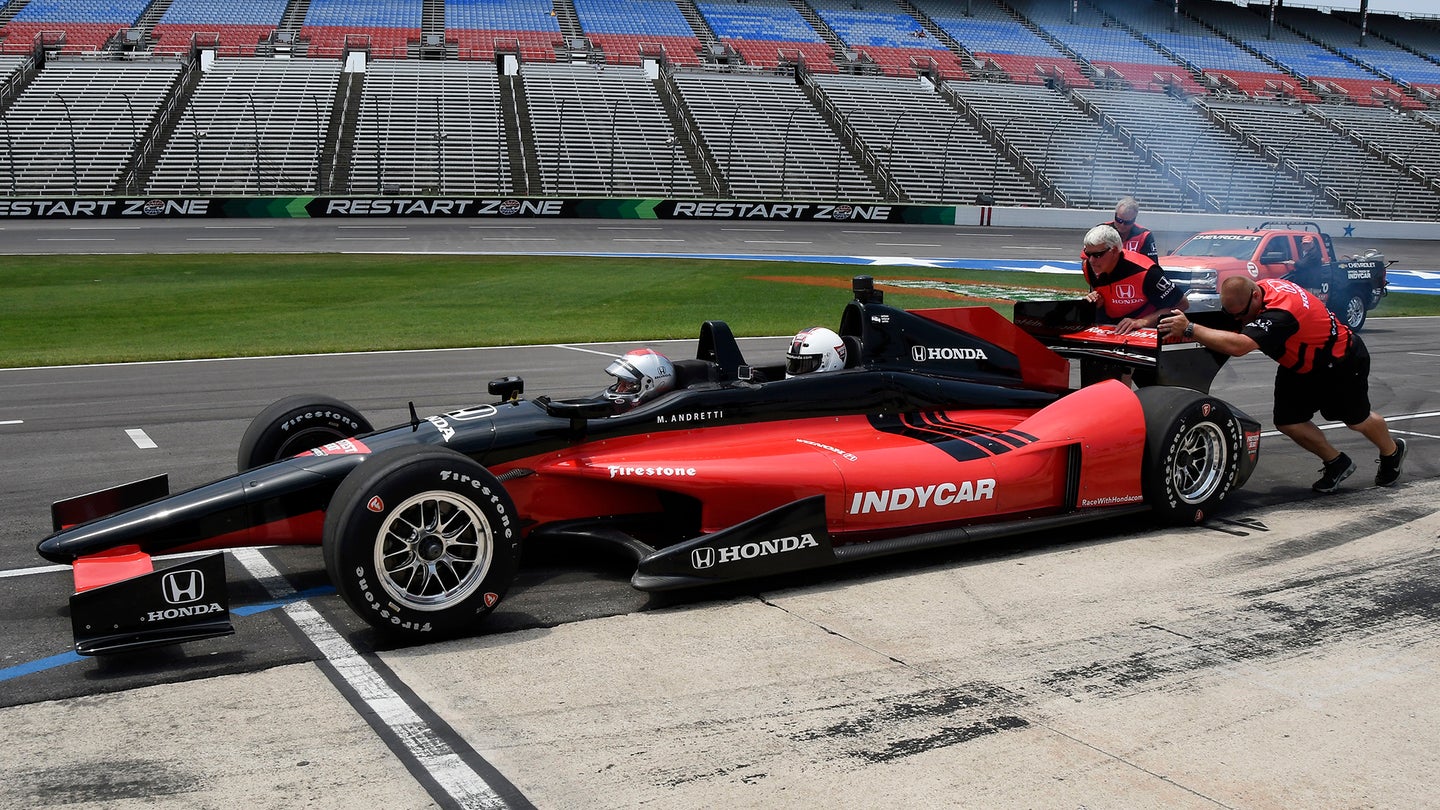 Arguably the most famous race car driver of all time, Mario Andretti is the definition of a living legend. More than that, though, he's an accessible legend. For the last 14-plus years, he's been giving lucky fans and VIPs at various IndyCar races the ride of their lives in a custom two-seater IndyCar sponsored by Honda and famously marketed as "the Fastest Seat in Sports." But on Saturday, The Drive exclusively reported the St. Petersburg Grand Prix on Oct. 25 was the 81-year-old Andretti's last day giving rides for Honda, the apparent end of a major era for the sport and its fans.

Our story was met with rebuttals from other outlets and Andretti himself, who denied knowing anything about it to Racer.com and on Twitter. This was strange, because as we'll detail below, all along we had multiple on-the-record emails from Honda stating unequivocally that Oct. 25 would be Andretti's final time driving the official Honda two-seater.

Today, Honda attempted to clarify the situation and announced it's actually ending its sponsorship of the Fastest Seat in Sports and the IndyCar ridealong initiative entirely as part of a marketing budget shift. The automaker further admitted to The Drive that it accidentally revealed a consequence of that plan—the end of Andretti's time driving the two-seater for Honda—before telling either IndyCar or Andretti about its larger decision.

The various IndyCar ridealong experiences offered during race weekends and other events are operated by an independent company and will continue with the backing of other sponsors; Andretti is free to sign on to drive for those efforts as he's done in the past. But Andretti is no longer giving rides on behalf of Honda, because Honda is pulling the plug on IndyCar ridealongs.

"I think this is sadly on our side, a situation where someone got out over their skis and said something they shouldn’t have said," Honda Motorsports PR boss Chuck Schifsky told us. "In hindsight, obviously we shouldn’t have said that this was going to be Mario’s last ride without all of those boxes being checked. But that’s where we are. That’s the actual situation."

We also reached out to Andretti via his son's racing team Andretti Autosport for comment, and we'll update if we hear back.

For our part, it's important to lay out exactly what we learned and when. On Oct. 19, our writer, veteran motorsports journalist Steve Cole Smith, received an invitation from Honda PR to attend the upcoming St. Petersburg Grand Prix, which would include "a ride in the Honda 2-seater during Mario Andretti’s final appearance as the driver of Honda’s Fastest Seat In Sports." It's worth adding that Smith has also heard from a source about Honda's growing liability concerns related to Andretti's age, though we don't have an on-the-record confirmation there. Honda declined to comment when asked directly about that reporting.

When Smith replied saying he could attend, a follow-up email from another Honda rep that same day added the following: "To have the chance to ride with Mario at the INDYCAR finale during Mario’s last day on the job is literally a once-in-a-lifetime treat – we’re so glad you’re able to make it!"

Well then. Given the apparent significance of the day, Smith also arranged to grab Andretti for a brief chat after his ride. On race day, things went off without a hitch—until that chat, in which it was immediately clear no one at Honda had told Andretti that it was his last day of two-seater duty for the automaker. Below is a transcript of their conversation, which Smith recorded.

Smith: So this is the last time, Mario?
Andretti: For what?
Smith: That you'll be driving the two-seater.
Andretti: Who told you that?
Smith: The PR people did.
Andretti: Not true. They didn’t check with me.
Other Journalist: You have a living to make!
Andretti: It’s not that at all. I do what I want. It’s not a matter of—I do what I want. No one’s gonna tell me [unintelligible]. No one is going to tell me when and where—Honda’s not telling me what I can do.
Smith: That’s what they told us in the press invitation.
Andretti [Loudly, to staff]: Where the hell is Honda coming from telling me I won’t be doing this anymore? Where the hell is this coming from?
Assistant: I have no idea.
Andretti: This is bullshit.

It was, as you'd expect, extremely awkward. Immediately following this interaction, Smith received another vague email from Honda in an odd attempt to clear things up.

"Although this is Mario’s final ride driving the Honda two-seater, it’s possible (or perhaps probable) that Mario will keep driving in the two-seater program for other groups who have 2-seat IndyCars, or as a driver at Indy Racing Experience’s events in 2-seaters belonging to other groups," the rep wrote. "In fairness, I shouldn’t have even mentioned it. With the benefit of hindsight, I realize that it being Mario’s last turn for us isn’t something we necessarily want to publicize, simply out of respect for Mario himself."

"What I said is true, that he won’t be driving for Honda in The Fastest Seat in Sports after today. But he might keep driving for other organizations, and Mario himself might not love being reminded of that. Anyway, I know how important it is to you to have your facts straight, so I just wanted to fall on my sword and say I’m very sorry for not being totally clear."

We do indeed like to have our facts straight around here. Honda also admitted to us today that this email was a misguided attempt to explain its announcement regarding Andretti's status without revealing the larger decision to end its sponsorship of the two-seater program. Without knowing that background, the only way to read that race-day email, Andretti's in-person reaction and the larger situation was that Honda and Andretti are parting ways, for whatever reason.

One last email—Smith wrote back letting the Honda rep know that Andretti seemed blindsided by the news when he brought it up. "Ugh, well I’m sorry it was you who was there. I’m not worried about any repercussions, but I really appreciate the consideration," she replied. "I just thought it must have been a potentially unpleasant situation for you, and I wanted to be sure I had given you all the right facts."

So, that's exactly what we wrote on Saturday. This is why we never used the word "fired," or any verbiage that would suggest causality, though we did say Honda "pulled" him from the driver's seat given the sequence of events. We never said that this was Andretti's last time ever driving a two-seater IndyCar, period. What we reported was that Honda had decided October 25 was Andretti's last day driving the automaker's official Fastest Seat in Sports two-seater car, something he's done every year since the program started up in 2006.

Obviously, we now know that's because Honda is ending its patronage of the IndyCar ridealong experience as a whole. But the ecosystem of two-seater IndyCar fan rides at races is actually owned and operated by an independent company, Indy Racing Experience. As Honda further clarified to us today, Honda dropping out won't stop Andretti from getting behind the wheel should the next title sponsor (or any other sponsor) want him as a driver for a race, private event, or official FSIS duties.

"Our relationship with Mario has been a paid driver for the two-seaters, if you will. Not unlike Mario being hired by a team to drive an actual race car back in the day. Same kind of a deal," the Honda rep told us. "If somebody comes along, like Firestone—he’s been a brand ambassador for Firestone for many years, longer than Honda—if Firestone wanted to do an event and wanted him to drive, then he would come out and drive."

As for why Honda's moving away from the two-seater, the automaker told us it's purely a budget decision. Honda thinks that money can be better spent on activities involving their street cars during race weekends, because after all, racing is marketing, and like every company this year Honda is trying to squeeze all it can out of each and every buck. It still believes in the value of the ridealong experience overall—just not for its specific needs at the moment. Nor does it want to "close the door on Mario" entirely. (For the record, we'd love to see what he can do in a Civic Type R, and volunteer if he needs an extra body for that.)

"There are performance-minded buyers that come to the races, and we need to do more with our production cars to get them in front of those people," Schifsky said. "The two seat program was essentially another on-track effort when we’ve already got an on-track effort [with our overall involvement]."

Here are the facts: Oct. 25 was Mario Andretti's last day giving rides in the Honda Fastest Seat in Sports two-seater IndyCar. That is not fake news. But he wasn't fired, or let go, or summarily dismissed. Officially, he's done because Honda is eliminating its sponsorship of the program entirely. We can't say for sure whether that's the full story. Meanwhile, Andretti can (and probably will, given his reaction) continue to give IndyCar rides on behalf of other sponsors. But whatever the case, Honda knows it messed this one up.

"This isn't what anyone wanted," Schifsky said with a sigh.