Leave Civilization in This Massive Semi-Submersible Boat for Just $750

To be clear, you will have to bring a crane. 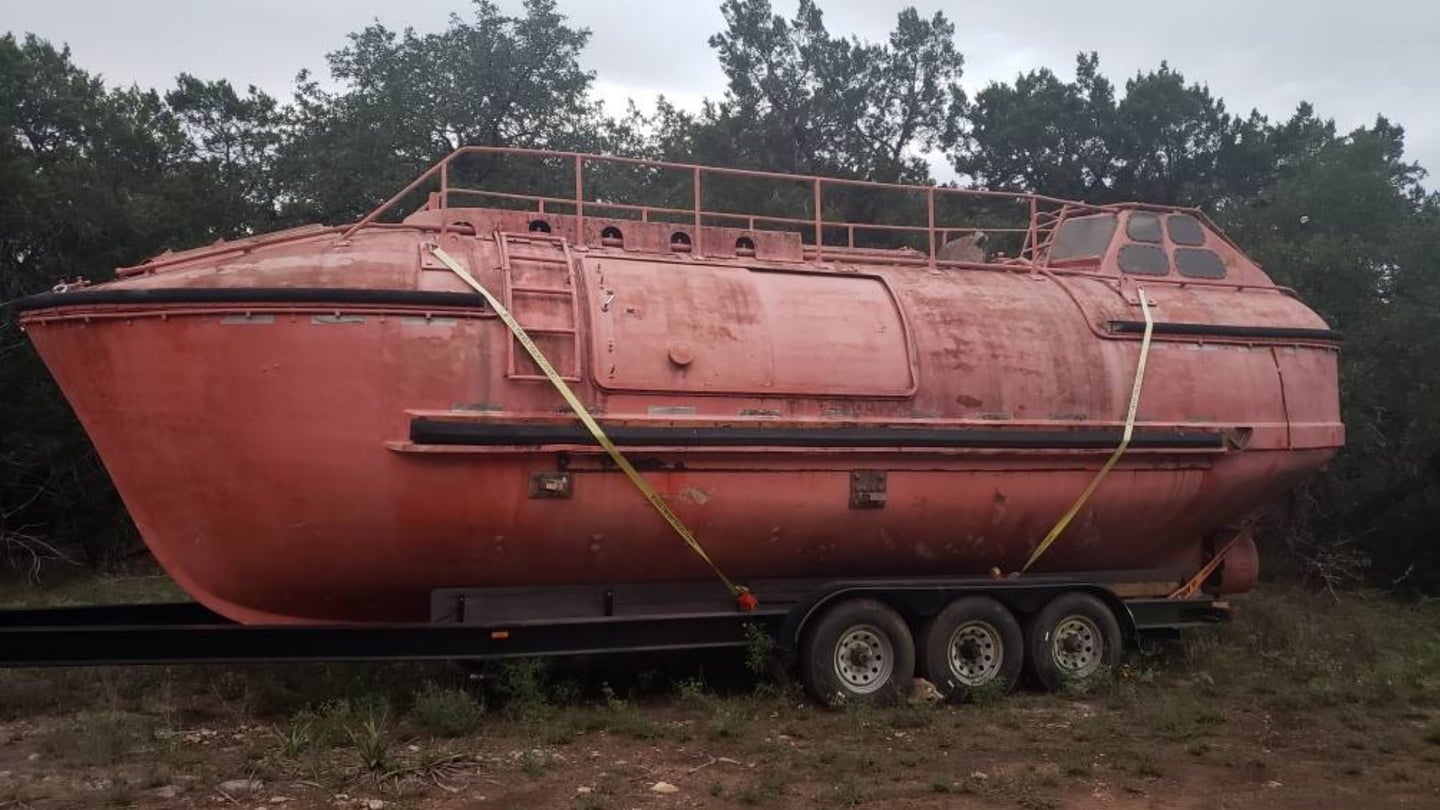 They say the best two days of owning a '30 long semi-submersible lifeboat are the day you buy it, and the day you sell it. If that's true, you're just $750 away from having one of your best days ever with this monstrous orange watercraft. Originally designed to be dropped into the ocean from 60 feet in the air, this thing is now sitting on a trailer outside Austin, Texas just waiting for a new owner.

And before you start asking unfair questions like "what would I do with a '30 semi-submersible lifeboat," let me show you some pictures of exactly what you'd be getting into here. The buyer actually has some good suggestions as to what you could do with it. There are only pictures of the outside, but I'm sure the interior is like the Ritz.

Now, this lifeboat isn't a submarine. It's only semi-submersible. It was designed to be dropped into the water off the side of a massive ship like a cargo vessel, dip down underwater briefly and then pop back up. So it is watertight, or it was once upon a time. That means there's nothing preventing you from living in this thing, really. Keeps you dry—what else is there?

It's 9.5-feet wide for most of its length and 11.5 feet tall. If I was a realtor, I would say that qualifies as high ceilings. And get a load of that upstairs sitting room with the floor-ceiling windows. I'm actually not sure if you could buy a larger living accommodation for $750. It also has a diesel engine if you wanted to put this thing back into the water, but the seller claims he has no idea what condition it's in.

His ideas for this boat? He thinks you should either turn it into a houseboat, tow it somewhere and make it into a getaway cabin or turn it into a fast-food restaurant. Personally I think it would be neat to repaint it, try to install some more windows and then turn it into an office space for your back yard or something.

There is one important caveat, however; you'll need to get a crane to take it off this trailer and put it onto your own. This boat weighs 20,000 pounds, so it's imperative that you get a sturdy crane. Yes, the price is just $750, but the peripheral costs to actually move this thing somewhere are probably more than that. But if you're OK with just living in this guy's back yard? Well, maybe that's not such a problem.

The Corvette Boat Was Pretty Terrible for Actually Boating

Getting a boat to work that was never meant to go outside of a collection or car show is tough.