Nope, that will not buff out. 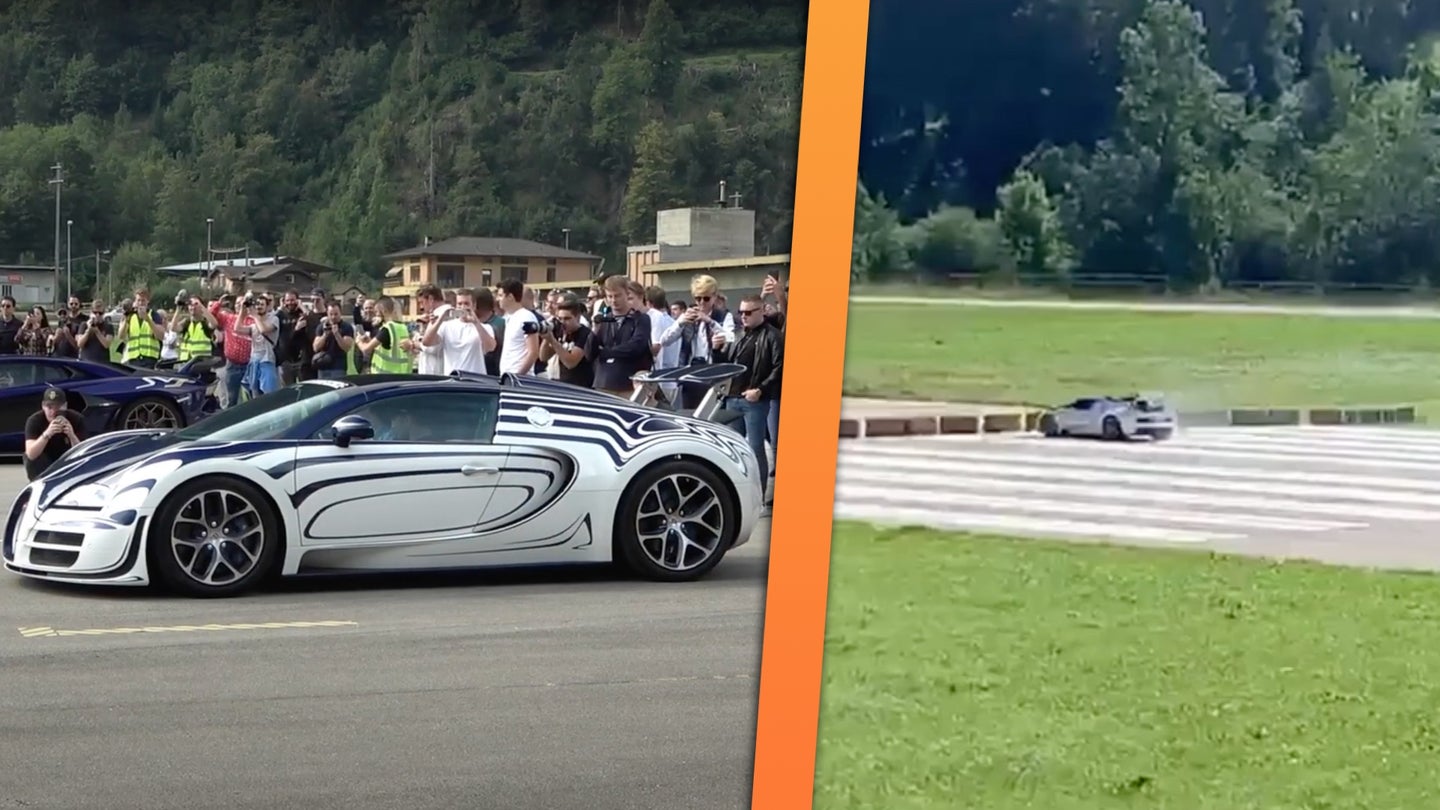 Last weekend, a bunch of supercar owners got together for an event that featured, you guessed it, a whole bunch of supercars owners doing supercar-owner things. However, there was a Bugatti Veyron owner that didn't enjoy the event much, because much like the Bugatti owner we reported on a few weeks ago, their flamboyant machine ended up with a bit of body damage.

According to Car Scoops, this event was hosted at an airport runway in Gstaad, Switzerland. Here, the fastest and most expensive leather interiors money can buy took part in Top Gear style drag racing. It's hard to imagine how anyone could crash into something on an open runway, but never underestimated a supercar owner—or brake fade.

An Instagram post by The Supercar Squad shows a Bugatti Veyron crossing the finish line and then devouring a large section of the runway with its brakes squealing and puffing smoke. A second or two later, it smashes into some hay bales at the end of the runway.

The crash was not severe and the video shows the car quickly turning around and driving back. What hurts the most—apart from the repair bill—is that this is a Bugatti Veyron Grand Sport Vitesse L'or Blanc, and it's literally the only one of its kind. Thinking about the Veyron's custom paintwork punching through a 60-pound hay bale can make any car enthusiast cringe.

The Veyron Grand Sport Vitesse L'or Blanc produces 987 horsepower courtesy of an 8.0-liter quad-turbo W16 engine. It's capable of shoving you into your seat with a zero to 60 time of 2.46 seconds and a top speed of 249 mph. The L'or Blanc is a one-off edition created by Konigliche Porzellan-Manufaktur, featuring real porcelain interior trim pieces. The price? Just under $2 million in 2011, but nowadays much more than that.

The owner drove away after the incident, so we're speculating that it was mostly, if not all, cosmetic damage. Considering the same car can be seen at similar events, including drag racing at this venue in previous years, I can imagine that the owner is used to dealing with the wear and tear of their machine. Still, I sweat with anxiety at the thought of how much it costs to replace a front bumper and grille on such a unique creation.