A 440 powered street van rocks harder than any station wagon. Come at me. 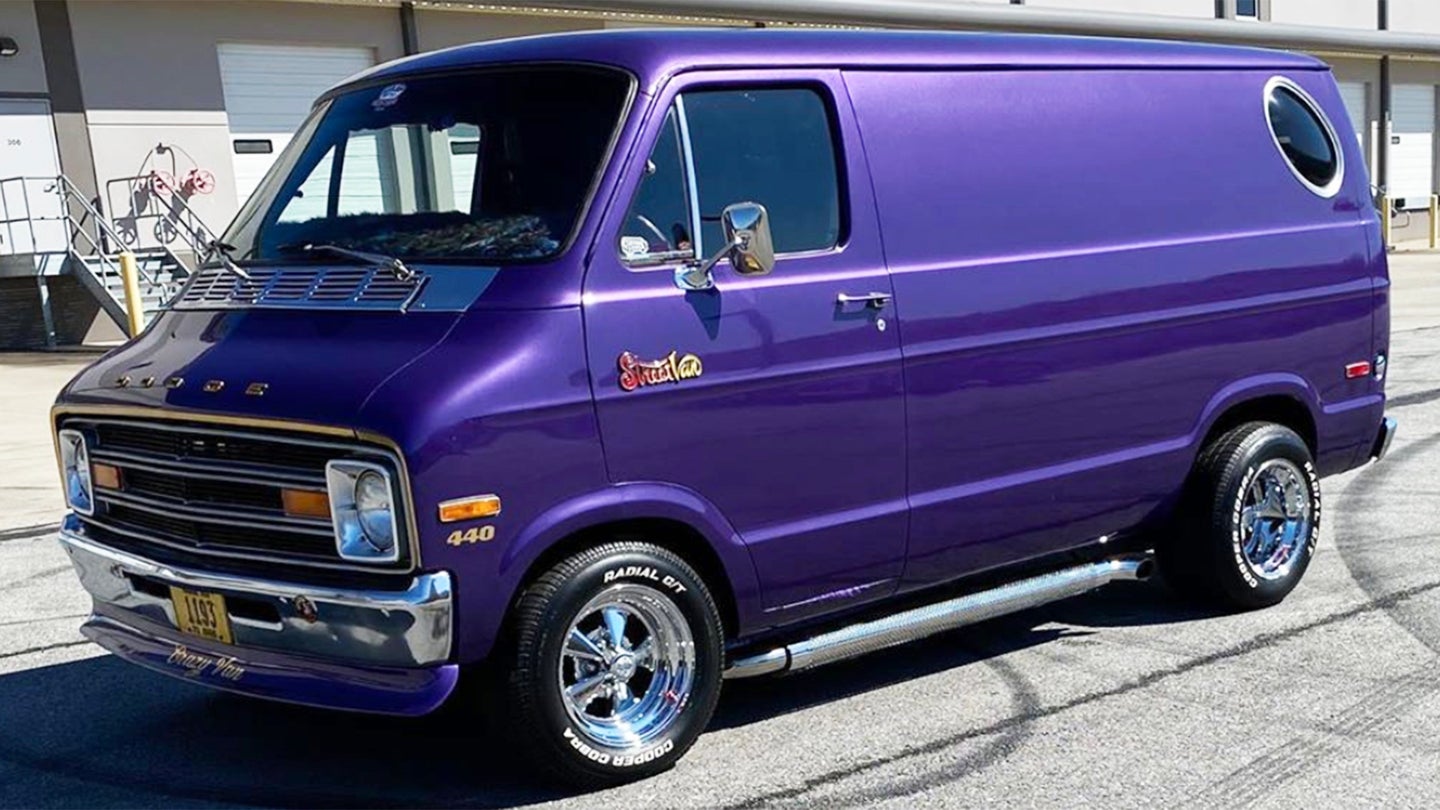 Automotive trends can sometimes age like parachute pants and iPods, here one day and gone the next. When’s the last time you saw a Hummer H2 rocking a set of spinner wheels, or neon lights flickering under a Honda Civic Si? Some things are better left in their respective eras. But it's also true that some pretty great stuff gets lost to time—like '70s street vans. Good thing there are people like Sean Thomas to bring them back one tire-shredding time capsule at a time.

When I saw his restored muscle vans on Instagram, I reached out to Thomas to talk about his far-out machines. Thomas was born in 1970 and has fond memories of seeing high-riding muscle cars and custom vans in the background of everyday life. Today, many people spend a great deal of time and money, restoring a vintage Camaro, Chevelle, or Challenger to its original factory condition. Thomas understands why people do this, but not always agree with it. As he put it, “They weren't stock in the 70s.”

That was definitely true for street vans, which grew as a distinct automotive subculture in the 1970s where owners would trick out their rides with groovy paint jobs, wild interiors, and legitimate performance mods. Thomas is a swap-meet fanatic and loves finding new-old-stock parts to built period-correct cars. “I won’t go to a car show unless it has a swap-meet,” said Thomas. He has a decent size collection of parts in his shop in Hiawassee, Georgia. Unlike a parts hoarder or picker, Thomas has a destination for every part he owns—like the two mid-70s Dodge Tradesman vans he recently restored to period-correct glory.

The first one is a 1976 Plum Crazy Purple Dodge B100 Tradesman dubbed Crazy Van. It sports a mild-built 440-cubic-inch big block from a Dodge motorhome and a full if-this-van-a-rockin interior with purple shag and a bed. Crazy Van was recently sold to a young Mopar fan in New Jersey, where hopefully it becomes a street van ambassador for future generations.

The focus of this story will be on the second muscle van, a 1977 Panther Pink Dodge B200 Tradesman dubbed Vanther. It, too, flexes a built 440-cubic-inch bored 40 over big block with a Whiplash camshaft, aluminum heads, a 750 Holly carburetor, MSD ignition, and Dynomax side pipes. No bed for this van, as Thomas uses it as a swap-meet parts hauler. Thomas says the only parts on this van that haven’t been messed with are the side door mirrors and front grille. The doors themselves were parted from a 1978 Dodge motorhome.

Thomas found the van during a casual night of Craigslist surfing. The price was fair, and it was located not too far from his place. Thomas says the van owner was a “real deal hippie” who owned it since the 1980s. He was building a log cabin from scratch on his property and needed to sell the van to invest in solar panels to go completely off the grid, man.

All you Mopar loyalists will be pleased to know that Vanther is 100% Mopar. Thomas added machine-gun exhaust tips from a Plymouth Road Runner. The console automatic sports a pistol-grip shifter, a pop-out gas cap taken from a first-gen Dodge Challenger, and a steering wheel from a 1970 Cuda. Probably the rarest part on Vanther is the Street Van emblem on its front fender.

Now Thomas is not a Mopar or No Car type. He appreciates all cars. When we asked him why he primarily restores Mopars he said, “They have character,” and we can’t help but agree. Chrysler products from the 60s and 70s have a style all to their own thanks to Looney-Toons marketing, flamboyant factory colors, and self-righteous performance that continues to this day.

Full-size, no-window vans often get a bad rap thanks to free-candy signs and FBI surveillance teams. But Thomas’s Crazy Van and Vanther make a strong case for a comeback. If station wagons can suddenly become hip, why can’t radical vans? And here’s a question for you. If you had a custom far-out street van blasting Deep Purple tracks, what would you name it? You can’t have a cool van without naming it. That’s, like, a rule, man.

Racer and tv personality Tanner Foust hustled the minivan to over 165 mph.

Nostalgia Alert: Micro Machines and Fold-Out Super Van City Are Back In Stores

You’re never too old to push a die-cast down a plastic track.