Marquez was sandwiched by the mighty straight-line power of the factory Ducatis. 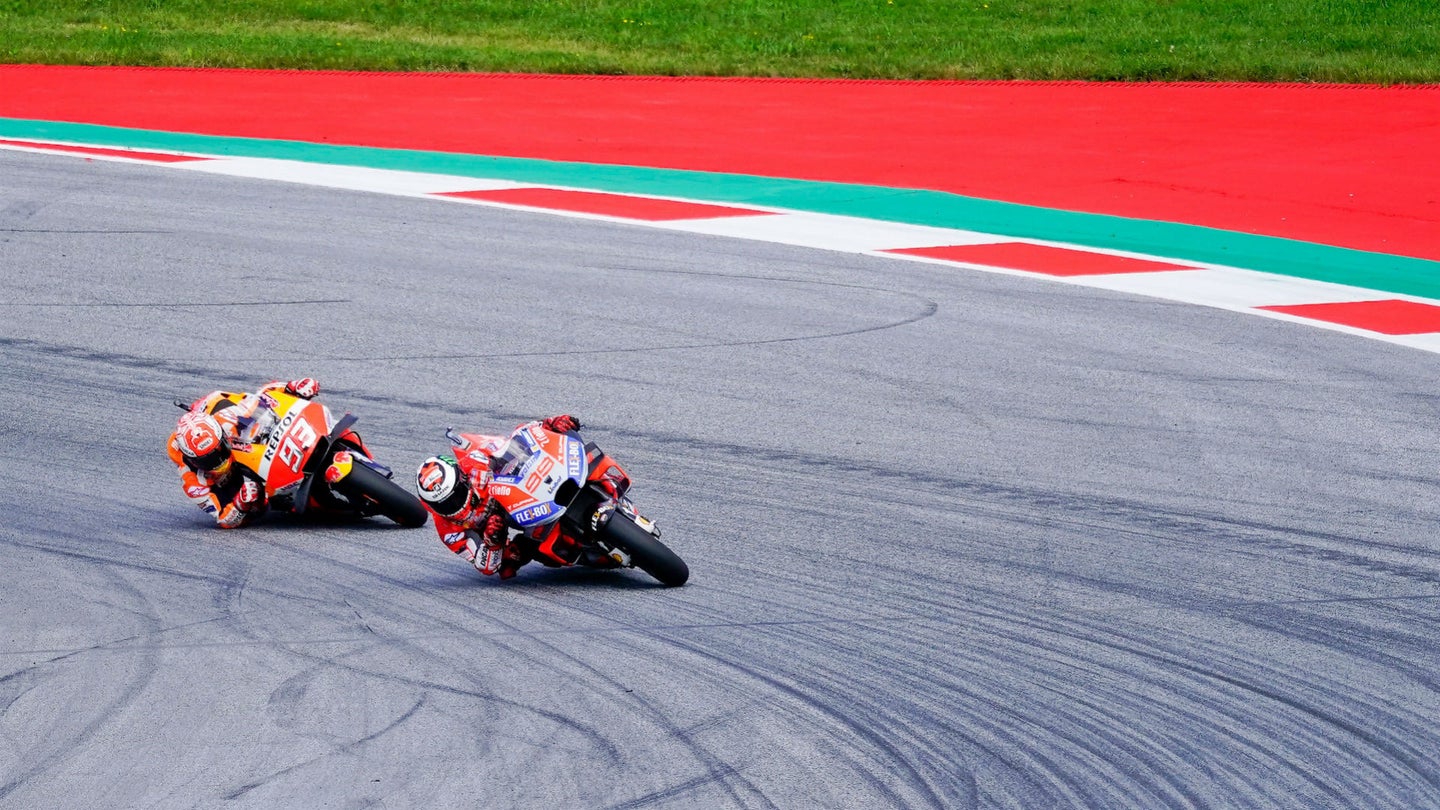 Jorge Lorenzo rode a precisely calculated race at the MotoGP Austrian Grand Prix at the Red Bull Ring that ultimately earned him his third win of the season. The Spaniard was able to hold off a charging Marc Marquez, who partially led the field just two laps before the end but couldn't get a run on Lorenzo on the closing corners of the challenging circuit.

Lorenzo made his intentions known from the very beginning, as he rocketed out of his grid spot and onto the lead as soon as the green flag fell. Marquez and Andrea Dovizioso could only watch as Lorenzo picked his way through the field and led the entire pack by Turn 1, only to relinquish it three laps later to Marquez.

In an effort to switch up his strategies from recent races, Lorenzo comfortably sat in second and sometimes even third place while Marquez pushed hard to build a gap at the front. The field settled after six laps or so and the race became somewhat uneventful, at least until Suzuki's Andrea Ianonne ran wide on a turn and retired just eight laps into the race.

Meanwhile, further down the order, the factory Yamahas of Valentino Rossi and Maverick Vinales were struggling to deliver any kind of pace, with The Doctor riding in eighth place after starting 14th, and Vinales in 14th after starting all the way at the back of the grid. The blue riders have endured poor luck this year, with performance either being good enough to lead or poor enough to not even be able to contest in the top six.

With just three laps to go, Marquez regained the lead of the race courtesy of some risky passing maneuvers on Turn 3 and 9, but Lorenzo quickly caught on to Marquez's strong points and defended strongly on the last two laps. In the end, Marquez didn't have the horsepower necessary to blast out of corners the way the Ducatis of Lorenzo and Dovizioso, the latter who eventually finished third, could.

After Sunday's race, it's Marquez who still leads the point standings with 201 points, Valentino Rossi with 142, and Lorenzo passed Dovizioso in the championship now with 130 points compared to his teammate's 129.