It's always about reading between the lines with Musk. Or numbers, in this case. 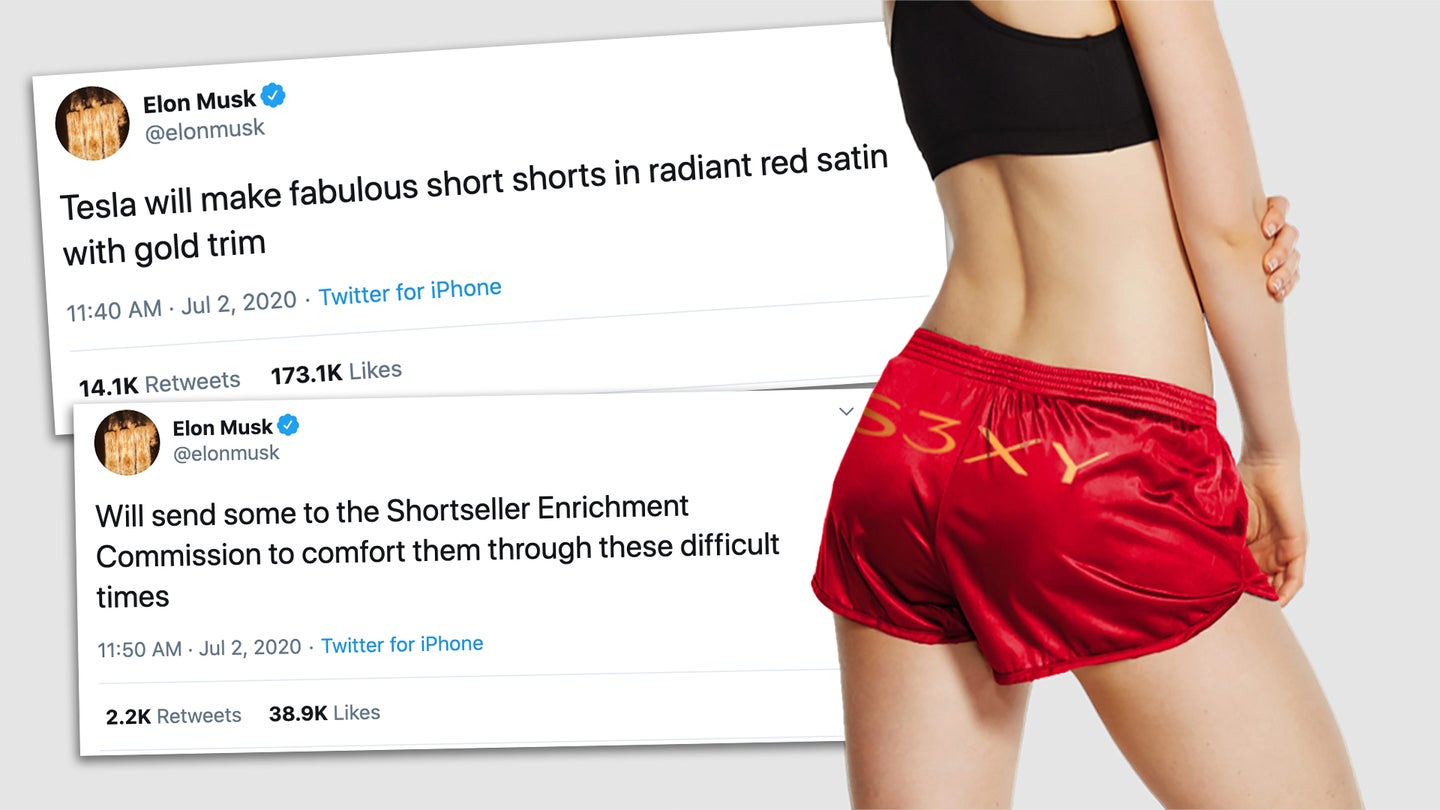 On Sunday, Tesla CEO Elon Musk took a new jab at stock short-sellers, announcing that the automaker would be selling limited-run "Tesla Short Shorts" for the price of $69.420. In case you're wondering, the extra digit at the end is a nod to the "funding secured" tweet that got Musk into hot water in 2018.

When it comes to cars, no manufacturer has a closer tie to the stock market than Tesla. The world's most valuable automaker has long been the subject of watchful regulatory eyes ever since Musk made a weed joke that artificially skyrocketed Tesla's shares in late 2018. Similarly, Tesla's volatile market value has been a gold mine for short-sellers—something which Musk seemingly loathes as much as the SEC.

And because of all that, we now have this.

The red satin shorts bare the Tesla logo on the front and the word "S3XY" across the back in gold—each letter or number being a model currently offered by Tesla—Model S, 3, X, and Y. The automaker says that the shorts provide "exceptional comfort from the closing bell."

Sadly, if you're reading this and want your own pair, it's already too late, because the shorts are already sold-out in all sizes.

Of course, if you want the shorts badly enough, you can buy one on eBay for an inflated price. At the time of writing, there are already 79 listings offering up the pre-ordered shorts. Some as low as $69 (plus $4.20 shipping), and others for $420.69. We hate to point out the irony here, but this is legitimately short-selling the short shorts.

Musk's feeling towards short-sellers has been something that the CEO has vented about time and time again. In fact, he has even called for short-selling to be declared illegal, hinting that the United States Securities and Exchange Commission (SEC) has actually enabled short sellers to profit over time. The fight reared its head again last week, just as Musk began tweeting some cryptic messages about the SEC acronym which drew in some fairly interesting interpretations.

Historically, Tesla has done a great job with hypebeast-esque products (also Musk's other companies), receiving insane amounts of press coverage without paying for ads. These short shorts continue to build on the inner-circle Tesla culture, which not only earns Tesla some time on the front pages but also rakes in a bit of cash for the automaker.

As for the next big thing? Let's not forget about Teslaquila. Musk says that the automaker has been fighting with "big tequila" to make it a reality.